GaGà is an Italian brand founded in 2004, making colourful quartz and mechanical watches, and it presented a preview of its Quirky skeleton tourbillon at Baselworld in 2014, intended as a celebration of the brand’s tenth anniversary. Quirky has a movement by Swiss company Hysek, and it is immediately recognizable for its bridges that have been reconstructed into ink-blot-like shapes, and for its use of bright colour, from black to white, from fiery red to acid green, in four limited-edition versions (just twenty pieces). 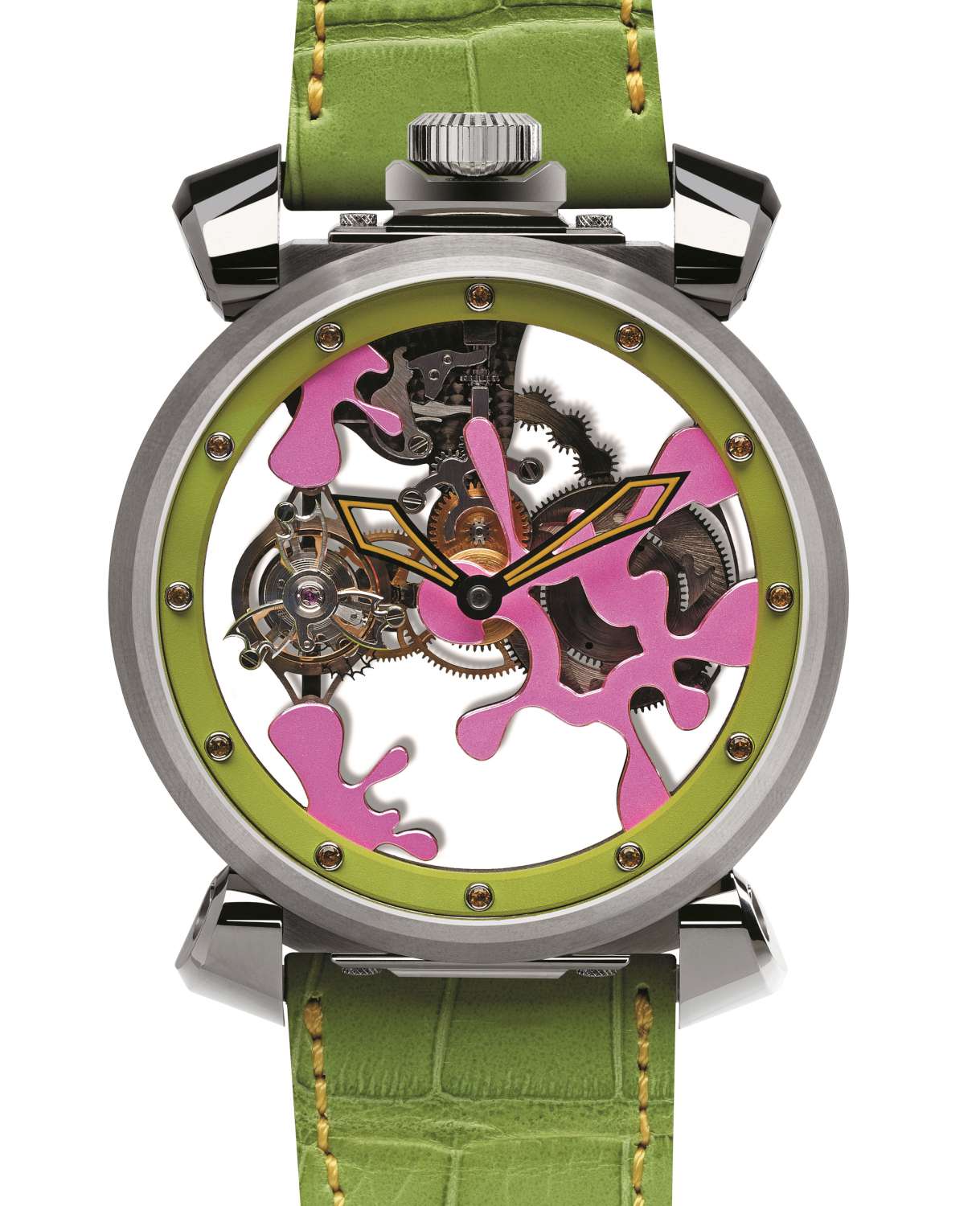 The case is in titanium, large at 47 mm diameter, 13.2 mm thick, with the crown at 12 o’clock (a characteristic of all GaGà Milano watches). Its water resistance is the standard 30 metres. 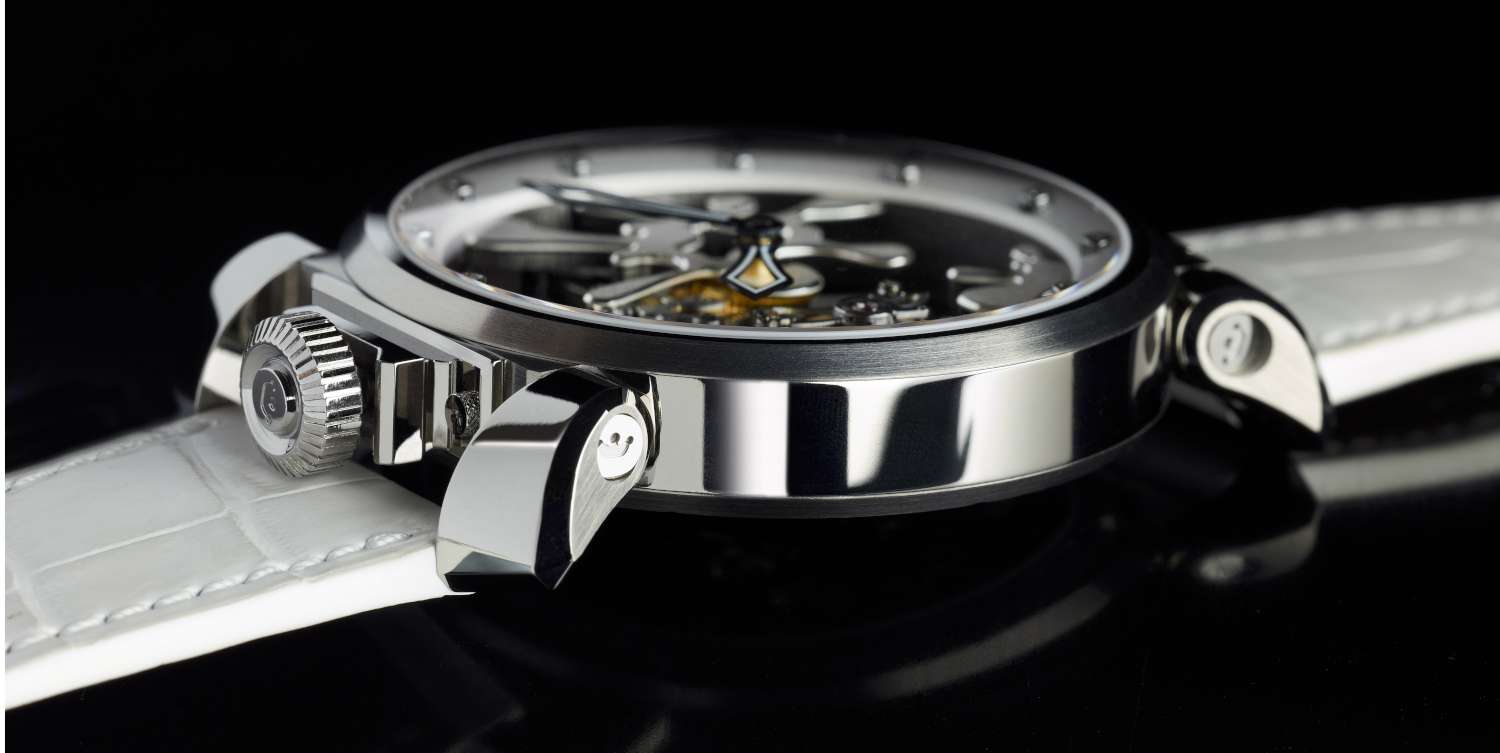 It is mounted on a strap in alligator or in techno leather, with folding clasp. The case looks to be well engineered, with several striking details such as the crown position, the Gagà Milano logo on the caseband, and a plate with “Quirky Tourbillon” affixed to the caseband in the 6 o’clock position. 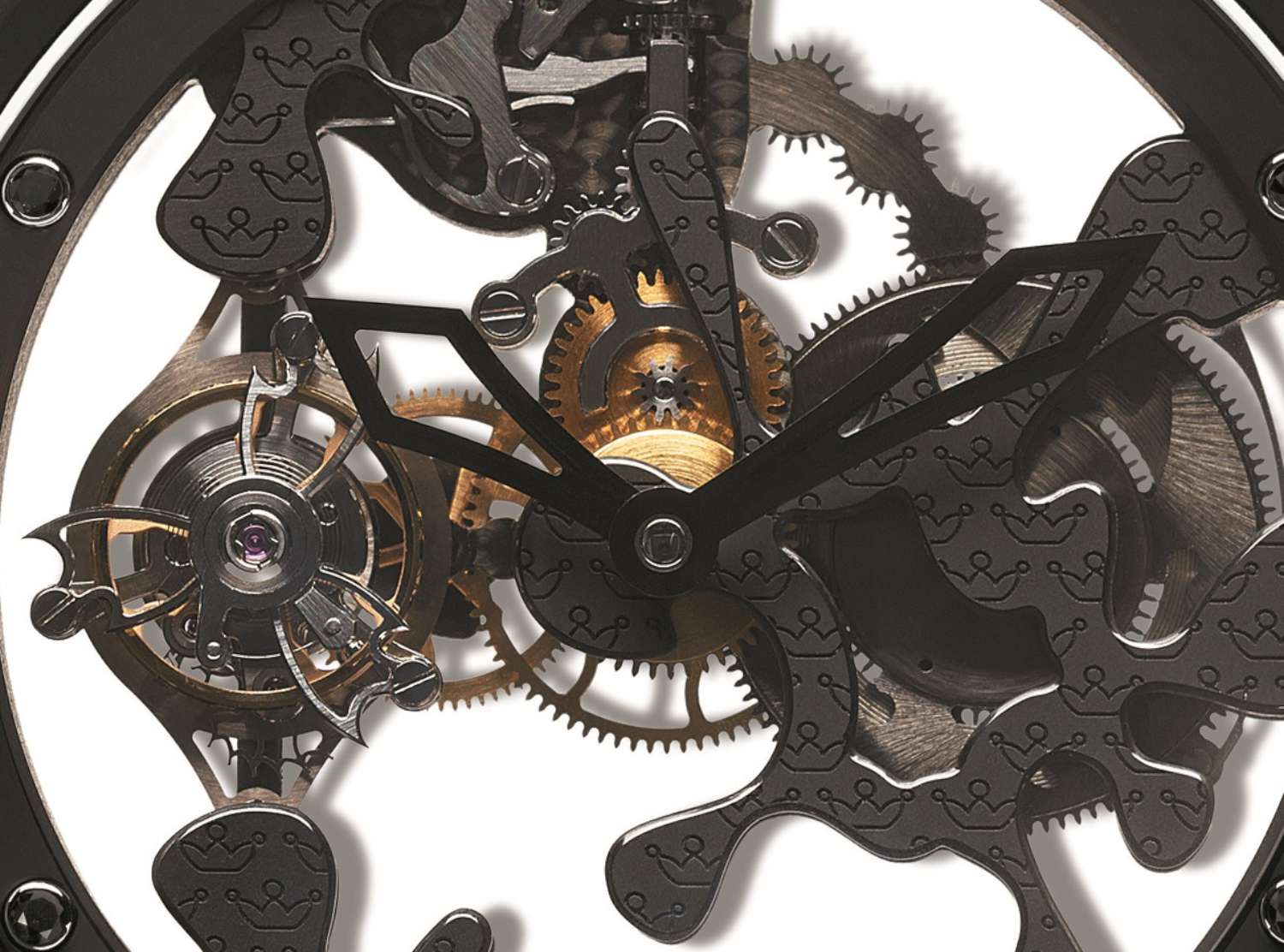 The movement is the manually-wound Hysek calibre GG01 with 161 components and 17 rubies, running at 28,800 vph/4 Hertz, and it has a power reserve of 80 hours. 161 components is a fairly small number for a tourbillon, and likewise the power reserve is unusually high. It’s an interesting piece of engineering, with everything slung on a plate that is attached to the outer mainplate ring by only a few narrow pieces of metal. Hysek makes its own limited-edition skeleton tourbillon watches, and so this piece uses a movement that had already been developed for pieces such as the IO tourbillon. In this watch, a metallized sapphire caseback helps obscure the hair on men’s wrists; the GaGà Milano Quirky tourbillon is intended for women and so it is completely transparent. 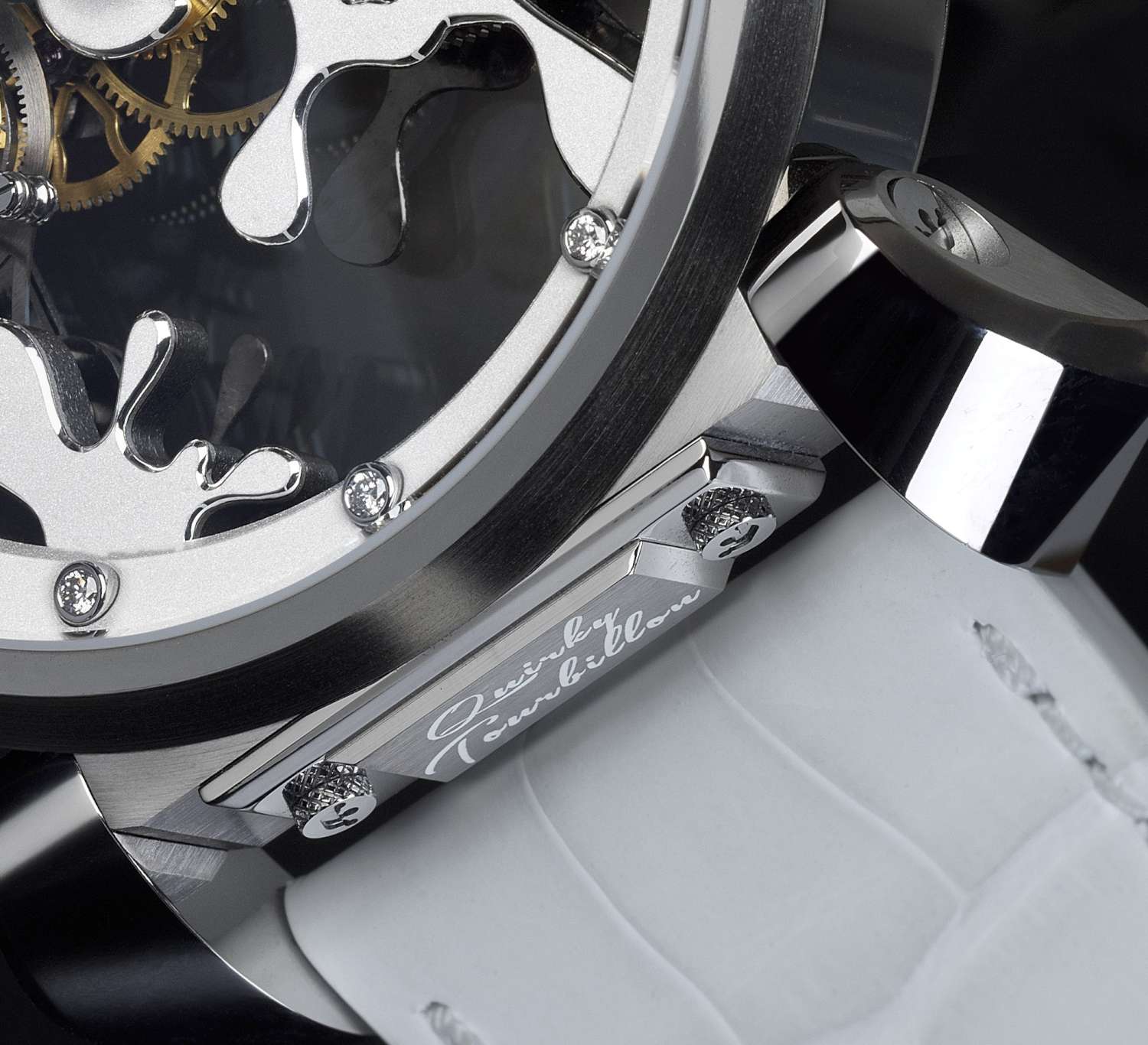 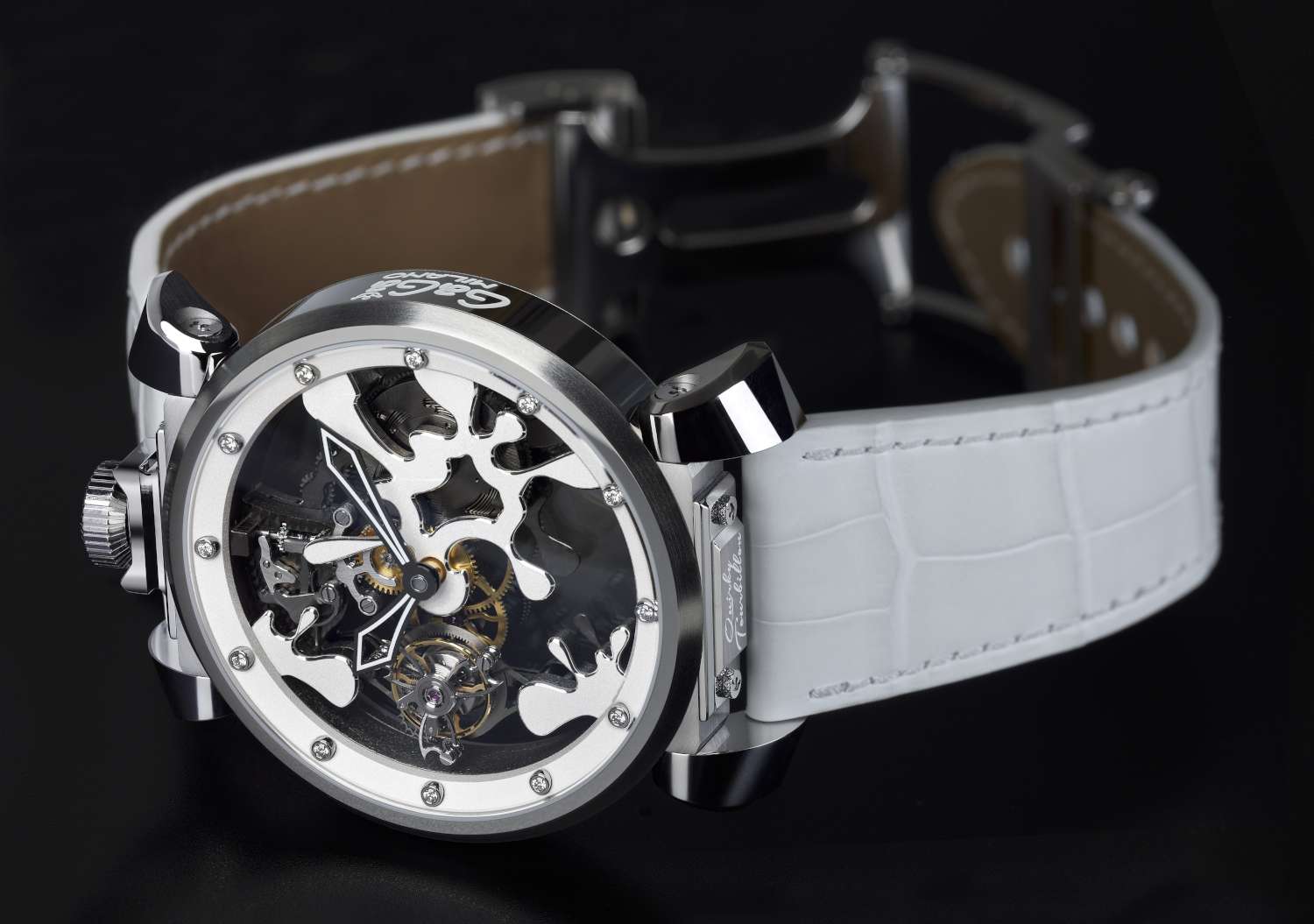