This new version of the Diagono by Bulgari has a lot in common with Rolex, with its understated design, tough sporty image, robust protection and solid caseback. Diagono was first launched in 1988 and it was one of the first watches to use aluminium; this was followed by titanium, and rubber straps. The family comprises chronograph, scuba, and magnesium (just time indications) models. This year, Diagono Magnesium features the lightweight metal magnesium and ultra-strong, lightweight polymer PEEK (PolyEtherEtherKetone) in the case, and ceramic on the bezel. The strap is in rubber with a PEEK pin buckle. PEEK and ceramic have also been used for certain components in the movement, for their characteristics of low coefficient of friction and high resistance to wear without lubrication (PEEK) and hardness and strength (ceramic). 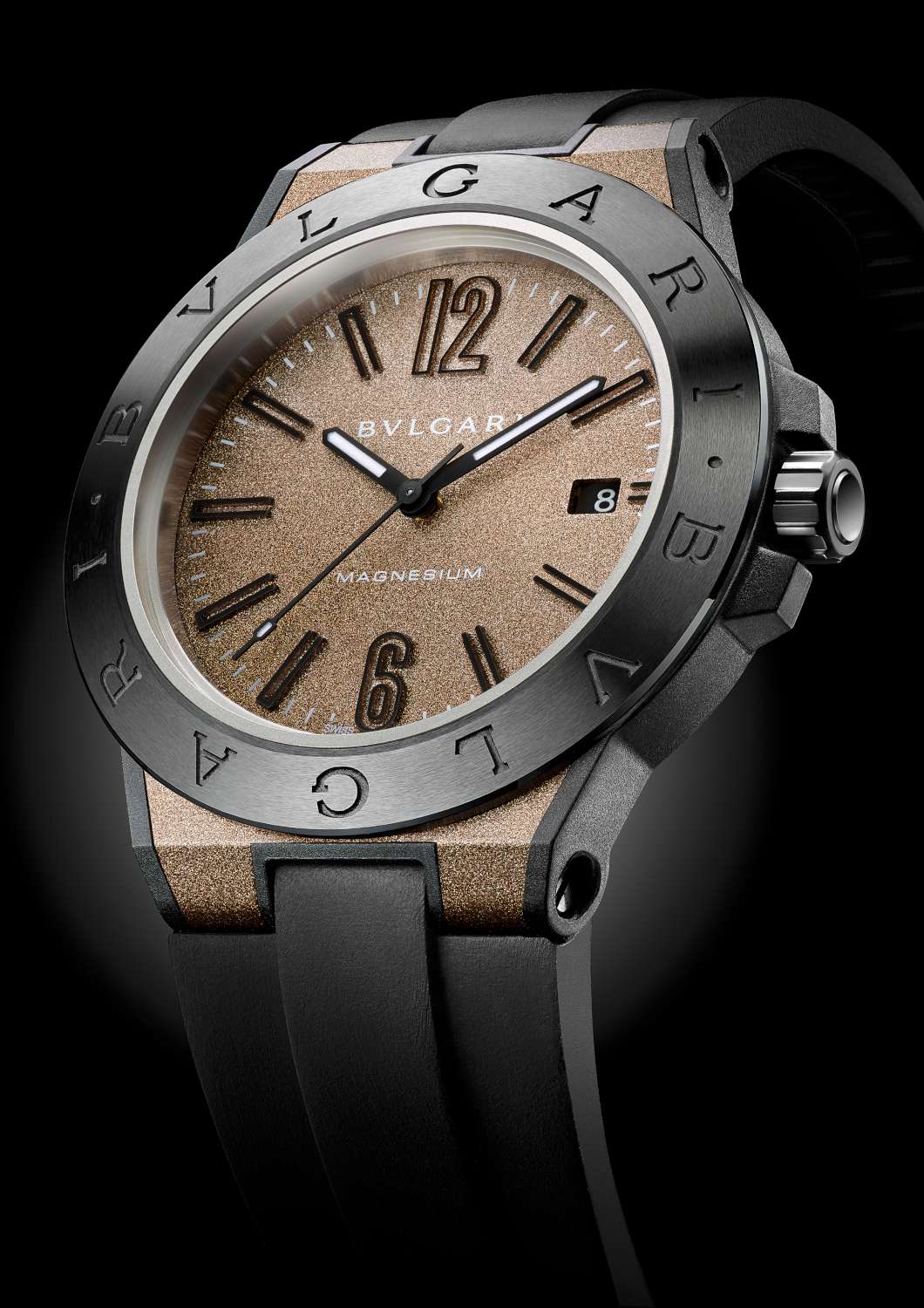 The dial and lugs are finished with another new material, Motorlac, a lacquer from the world of motor racing. It is tough and flexible, and it can be used to create textured surfaces. The colour versions are copper brown, anthracite grey, deep blue and silver grey. It’s a watch that wears comfortably at 41 mm diameter; the self-winding movement runs at 28,800 vph (4 Hertz) and has a power reserve of 42 hours. In the literature, Bulgari tell us nothing about the movement, and the PVD steel caseback conceals everything.

This watch is also used for Bulgari’s smartwatch, the e-Magnesium, presented as a concept at Baselworld 2015. The same mechanical watch has a cryptographic NFC chip and invisible antenna inside that interacts with an app on your smartphone, effectlively acting as a key to enable the app to display your passwords and other sensitive information. NFC, Near-Field Communication, is the system currently used (for example) in security cards that enable you to get into the office in the morning. The fact that it operates over a maximum distance of about 4 inches/10 cm increases its security. In Bulgari’s version, the information that the watch enables the app to display is stored somewhere in a Swiss military bunker, and if the smartphone is lost or stolen, the sensitive data will self-destruct. In the future, this electronic key will also be used to unlock car or house doors, activate alarm systems, and make payments. In a way, this system can be considered as Bulgari’s response to the Apple Watch: as Jean-Christophe Babin, President of Bulgari Group, said, “While certain brands offer watches subject to rapid obsolescence, we are offering a self-winding, sustainable luxury watch like all Bulgari luxury watches!” The NFC chip does not require any recharging. In the photo below, the Diagono Magnesium, and the e-Magnesium: visually, the only difference is that the Magnesium logo has an encircled e in the smart version (the copper-coloured model below). 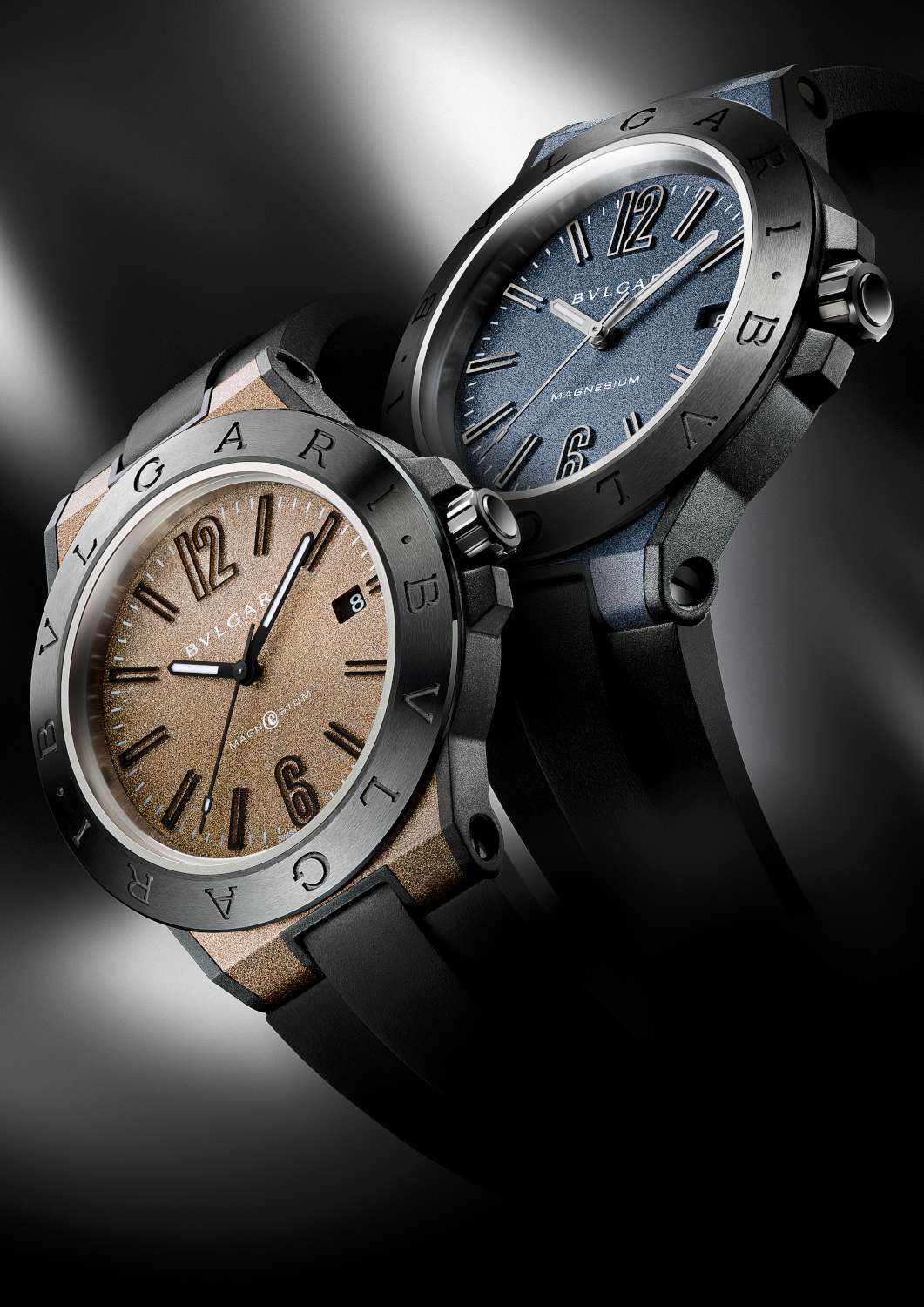 The watch costs about €4,300, £3,120, an aggressive price point which makes it a very attractive proposition. The references are: