Swallow shows the hours with its wingtip on a retrograde scale

Butterflies alternately indicate the minutes on circular scales, moving at variable speeds by means of an elliptical wheel at the centre of movement

Clouds, bird and butterflies in enamel on white gold 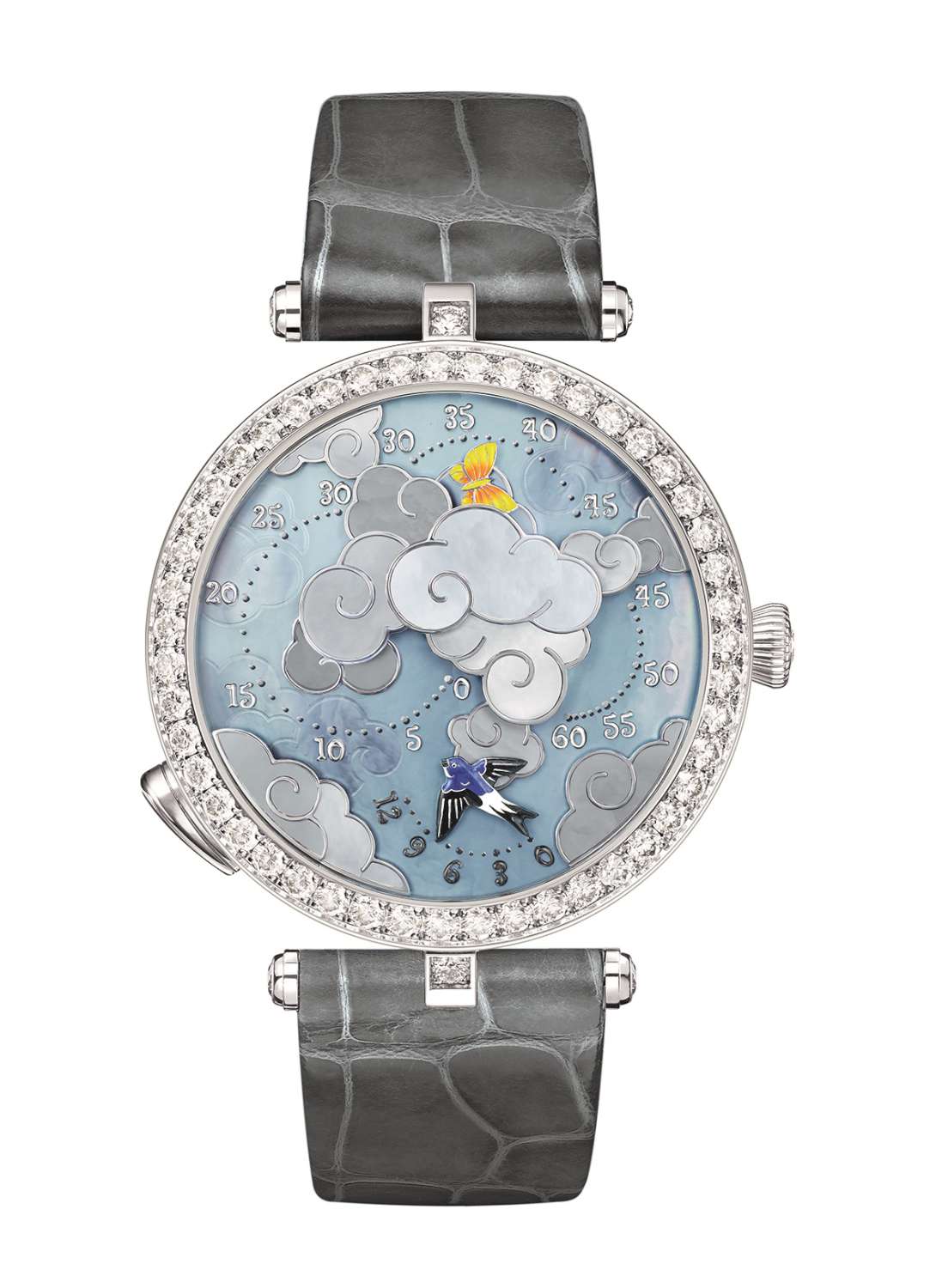 Van Cleef & Arpels have released news about one of their new watches that they will be presenting at the upcoming show SIHH, taking place in Geneva from 18 to 22 January 2016. The brand specializes in a very poetic depiction of time (their description The Poetry of Time is a registered trademark), in which the watch tells a small story by means of a specially-built movement that is no less complex than other calibres built for the classical complications such as chronograph or calendar. In this piece, Lady Arpels Ronde des Papillons, the dial evokes the constant change of the sky, with clouds that provide a backdrop for a swallow and three butterflies. The swallow shows the hours with its wingtip on a retrograde scale at the bottom of the dial, while the butterflies alternately emerge from the clouds and indicate the minutes on three intersecting circular scales. The scales have different diameters and so the three butterflies move at different speeds, and what’s more, the minute indications on each circular scale are irregularly spaced, because each butterfly speeds up and slows down, an effect achieved by using an elliptical wheel at the centre of the movement. This is an interesting piece of watchmaking: it looks like the central wheel’s oval shape enables it to mesh with first one wheel, then with another, for the successive butterflies. There is a patent pending for this feature of the calibre, which looks totally unlike any other conventional watch movement. 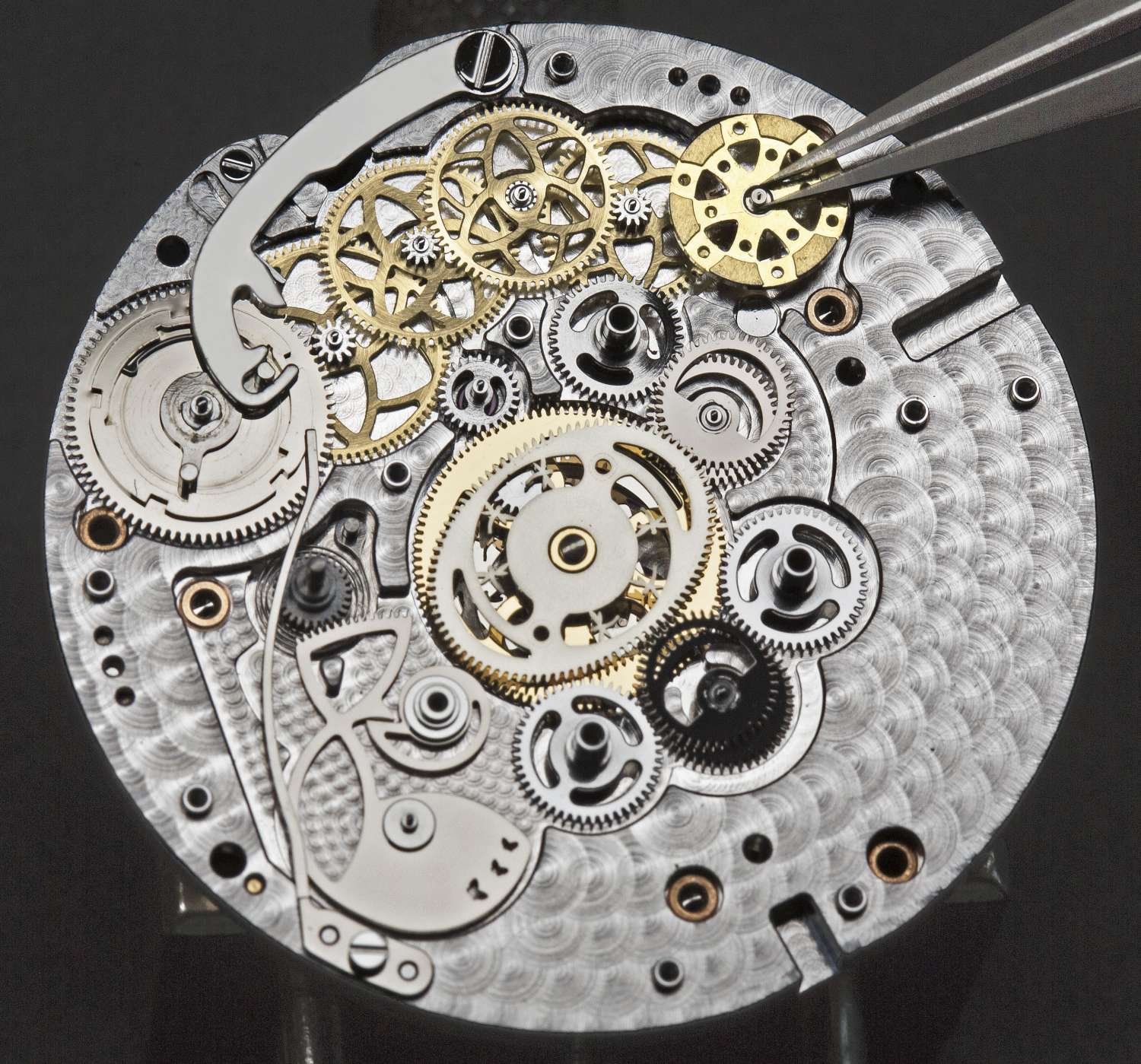 It would have been nice if Van Cleef & Arpels had applied the variable-speed concept to a butterfly showing the seconds, so that the user could constantly see this unique type of movement. But the brand typically prefers a more serene approach, and most of its Poetic Complications are limited to minutes and hours. And in any case, a seconds indicator of this sort would be a massive drain on energy. 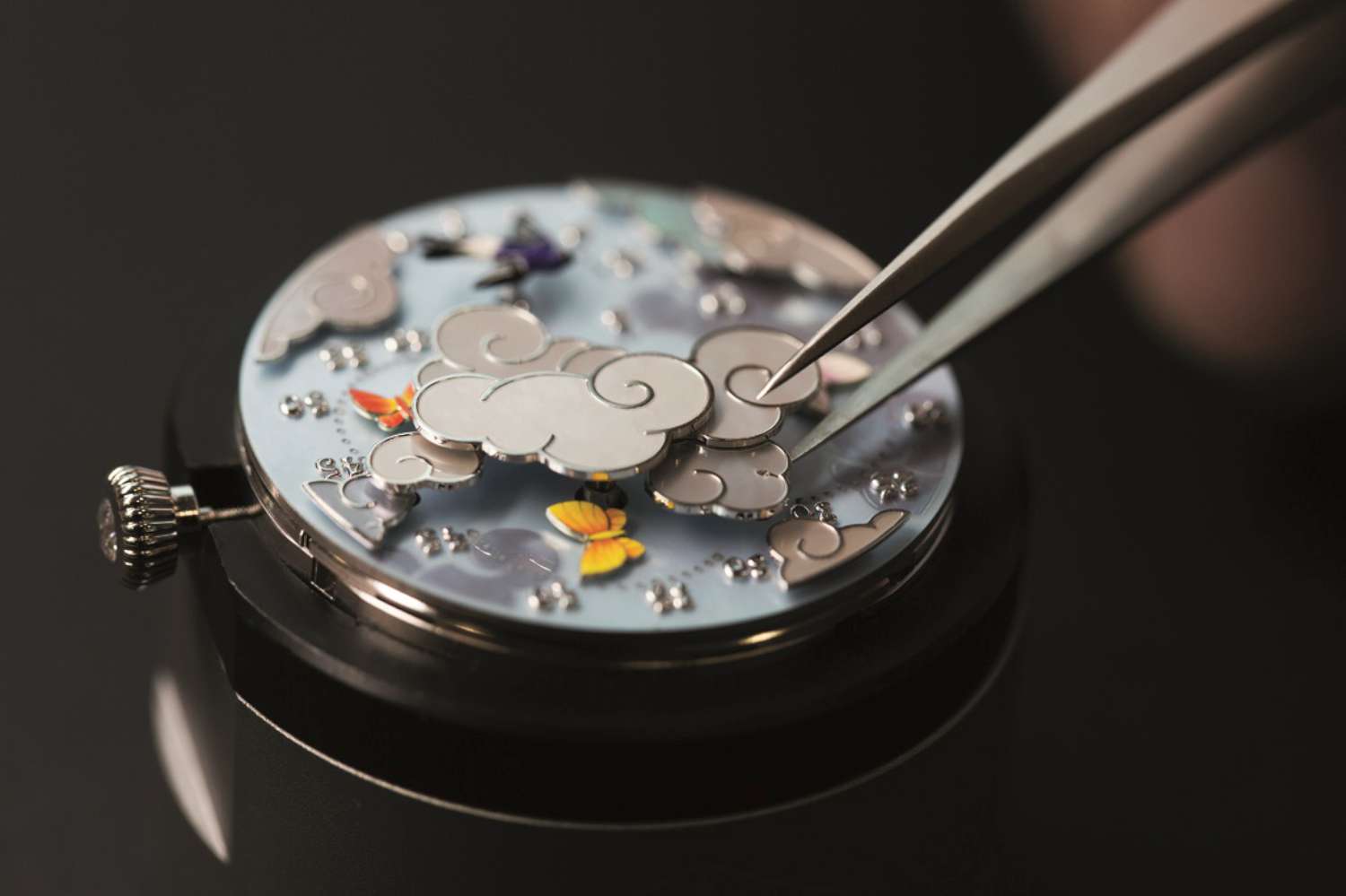 The result of all this celestial mechanics is an ever-changing scene. This miniature picture is depicting using a backdrop of engraved blue mother-of pearl, on which the clouds, bird and butterflies are in enamel on white gold. The caseback is also engraved with cloud motifs, and there is a narrow transparent sapphire window revealing the oscillating weight bearing the same sort of decoration. The mechanical beauty of the movement is hidden from view. 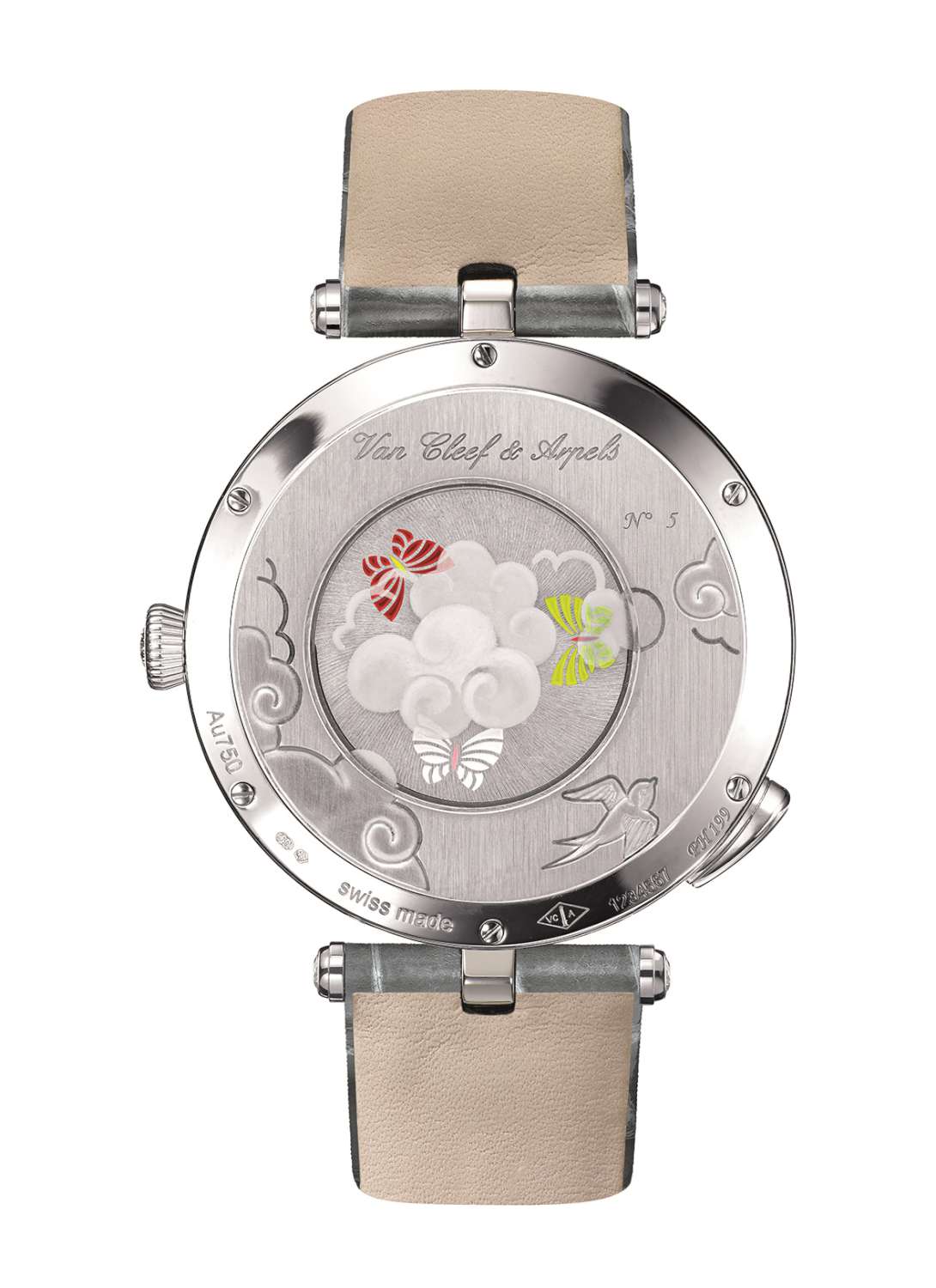 The wearer can set the scene into motion by means of the pusher on the caseband which triggers a 13-second animation, with the butterflies that set off on their circling flight amongst the clouds. At the end of the animation they return to their rightful position, which allows for the time that has passed during their brief excursion.

The watch is powered by a self-winding mechanical calibre developed specially for Van Cleef & Arpels by a movement specialist, and it has a 42-hour power reserve. The 38 mm white gold case has an alligator strap with white gold pin buckle. The watch is set with diamonds on the bezel, crown and buckle.

Each piece is numbered on the caseback but it is not a limited edition. The watch is part of the Poetic Complications collection by Van Cleef & Arpels, first launched in 2006 (so this piece for 2016 marks the collection’s tenth anniversary) to celebrate the brand’s centenary.