Position of sun shown at 12 o'clock

31 perforations showing the date, and also acting as 2-minute indices for use when reading the seconds and minute hands

Unilluminated portion of the moon

Illuminated portion of the moon (moon phase), accurate to 1 day's deviation every 3,478.27 years. The display also shows the position of the moon in relation to the earth and sun

Position of the earth

Case in titanium or silver, 39 or 42 mm diameter

Dial in hand-patinated brass, with hour indices created by milling down to the bright metal

Movement based on the ETA 2824-2, with moon phase module by Ludwig Oechslin, just five components for the most accurate mechanical moon phase in the world 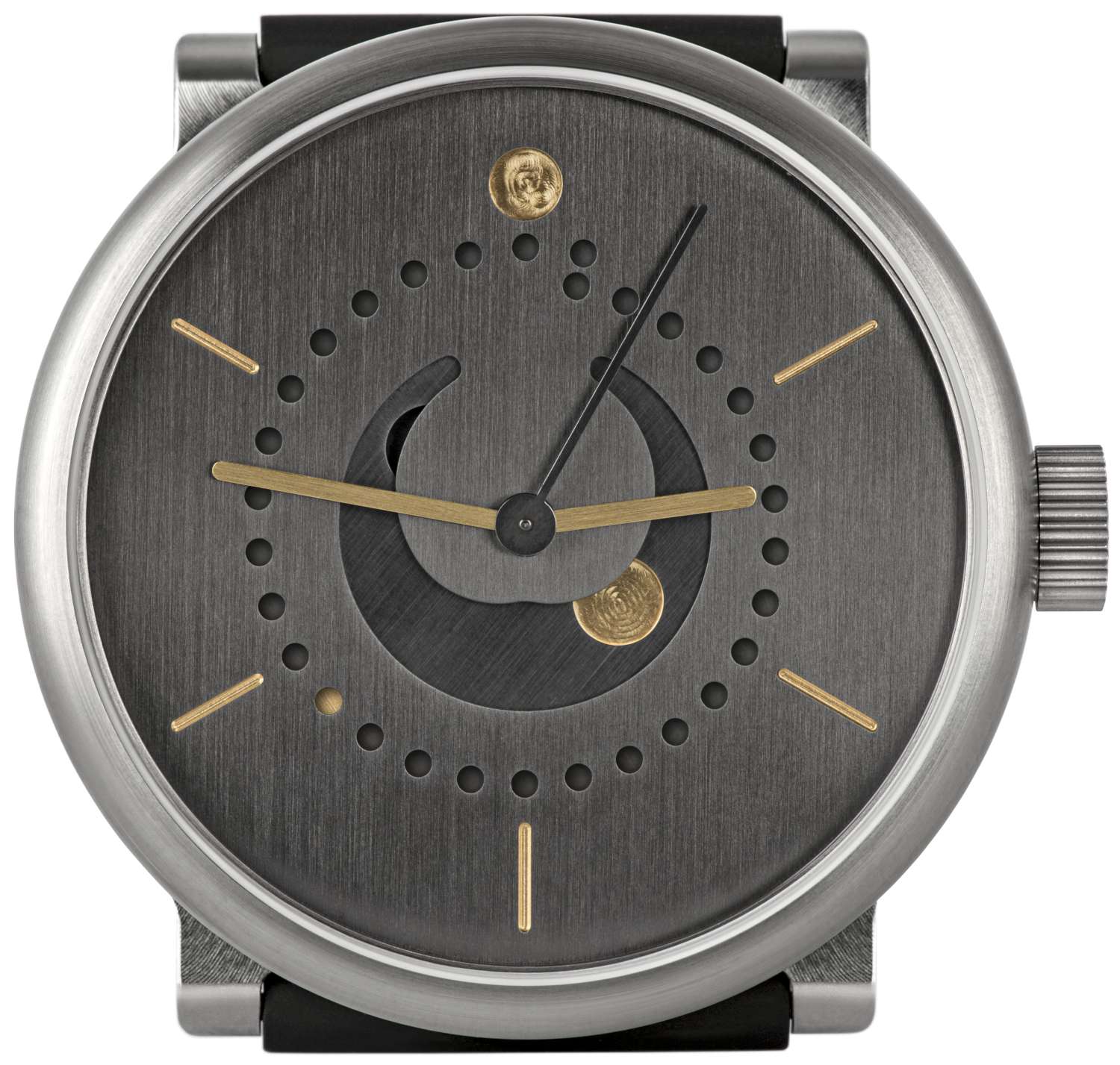 We are accustomed to high-end watches as being complicated machines; the more complicated they are, the more expensive they are. Even the simplest watch has about 160 components, all separately machined and then assembled by a watchmaker, in a movement that is displayed through a transparent caseback. Each additional complication, such as a chronograph, a calendar, a moon phase and so forth, needs more parts, to the point that a “grand complication” watch is exactly that. 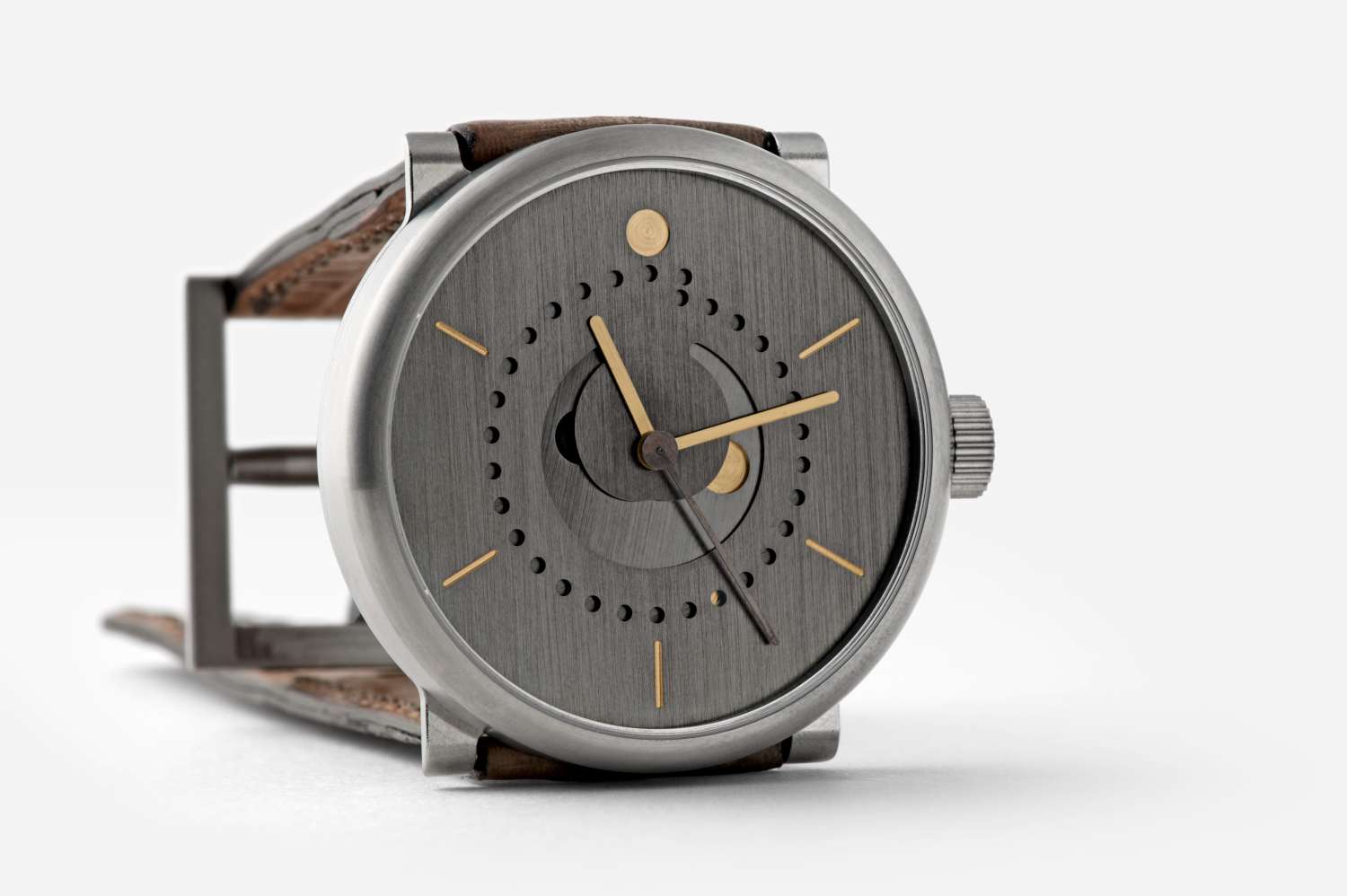 The most accurate mechanical moon phase in the world

A few watchmakers work in the opposite direction, towards simplicity, driven by the same sort of obsession that spurred Einstein to spend decades on searching for a unified theory that would provide a single equation for all the forces in the universe. The perfect example is Ludwig Oechslin, who has created many superb watches for Ulysse Nardin such as the Freakand who now designs and builds watches at his own company ochs und junior. The Moon Phase Patina has an incredibly simple appearance, but it does something that most other accurate moon phase watches do with many more components: it keeps track of the phase of the moon with incredible precision, to an accuracy such that the moon phase will be one day out of synch after 3,478 years! By way of comparison, the simplest moon phase goes one day out of synch after about 2 years and 7 months, while more complicated versions deviate by one day in 122, 500 or 1,007 years. Ludwig Oechslin has designed and built the most accurate mechanical moon phase watch in the world.

He achieves this with just five components. The complication here is in the mathematics. Oechslin has a background in several areas of science, such as theoretical physics and the restoration of astronomical clocks, and he uses this knowledge to create mechanisms based on gears (instead of the usual levers and springs) and in particular epicyclic gears. The results are movements with a high degree of reliability and precision.

The dial continues the theme of minimalist simplicity. The position of the sun is shown by a disc at 12 o’clock, that of the earth by the bulging shape at the centre of the dial, and the moon in the long crescent window, so that the display shows not just the phase of the moon, but also the relative positions of sun, moon and earth. The ring of small holes shows the date, intuitively, and at the same time, the thirty-one holes (with the last superposed over the first) are exactly two minutes apart and so can be used to read seconds and minutes more exactly. 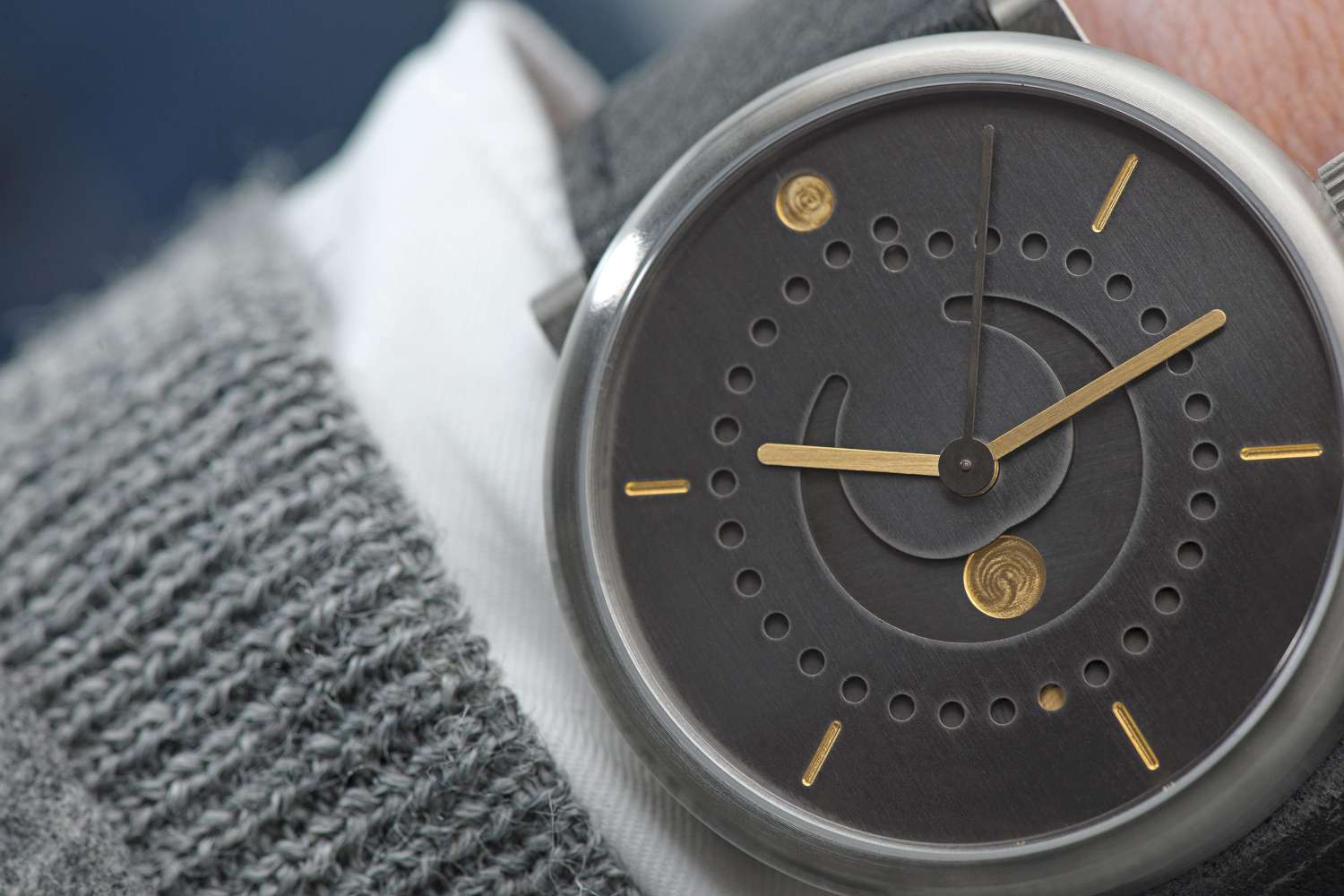 The watch is minimalist in materials as well. Brass is used for all components visible on the dial, including the hands. The dial is hand-patinated to turn it dark grey, after which details such as the position of the sun and the hour indices are milled out to reveal the bright metal underneath. The second hand is hand-patinated to make it different to the hour and minute hands. The case, 39 or 42 mm in diameter, is in titanium, which is also used for the crown and buckle (a version with silver case is also made). There is no logo, and the caseback is solid. The movement uses the ETA 2824-2 calibre for the basic time and date functions, integrated with Oechslin’s moon phase module. 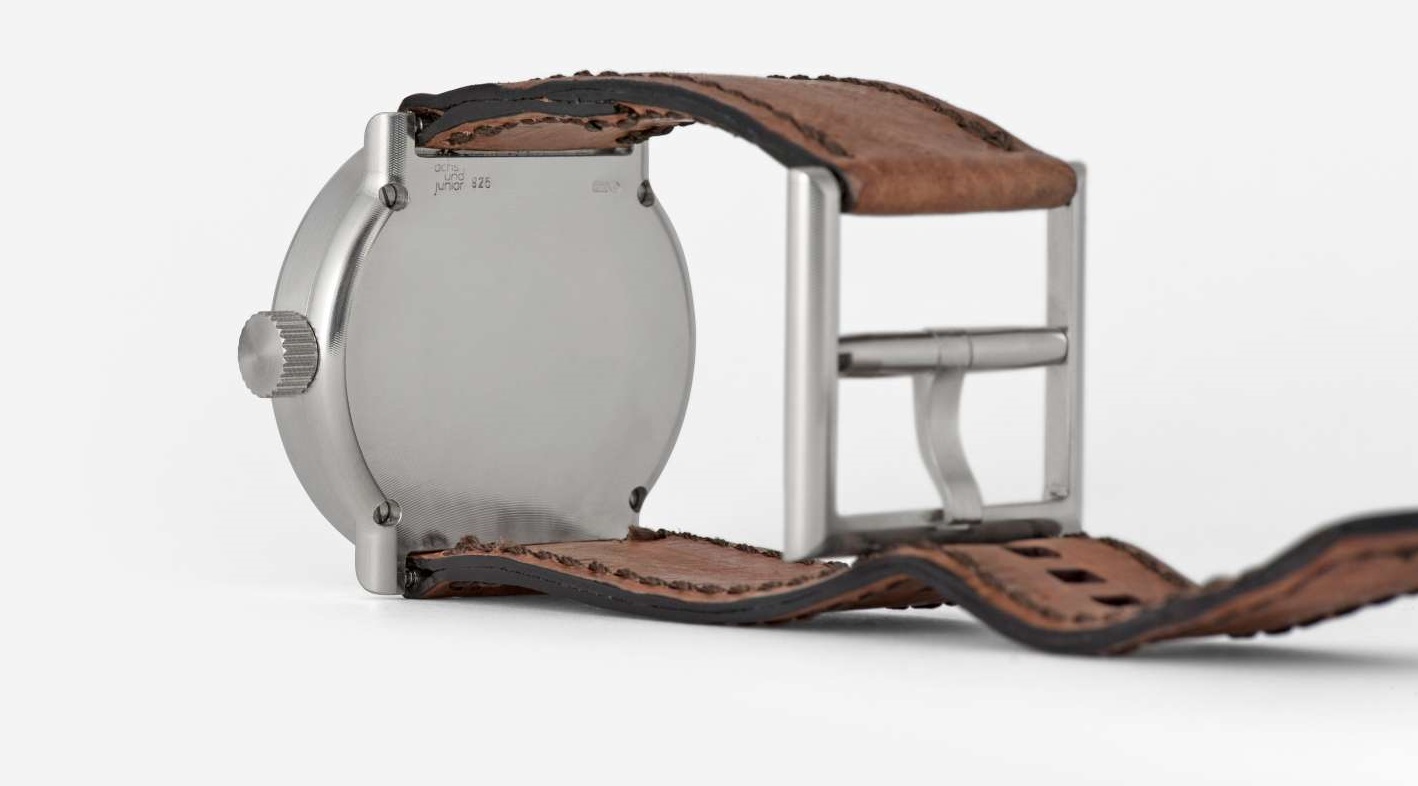 Oechslin’s watches are custom-made in small quantities: Ochs und Junior makes about 300 watches per year. All components have a lifetime warranty. The price of the Ochs und Junior Moon Phase Patina is 8,000 Swiss francs (about €7,400) for the version with titanium case, and 10,000 Swiss francs (about €9,200) for the version with silver case. Further information and contact details from https://www.ochsundjunior.ch Below, a portrait of Ludwig Oechslin. 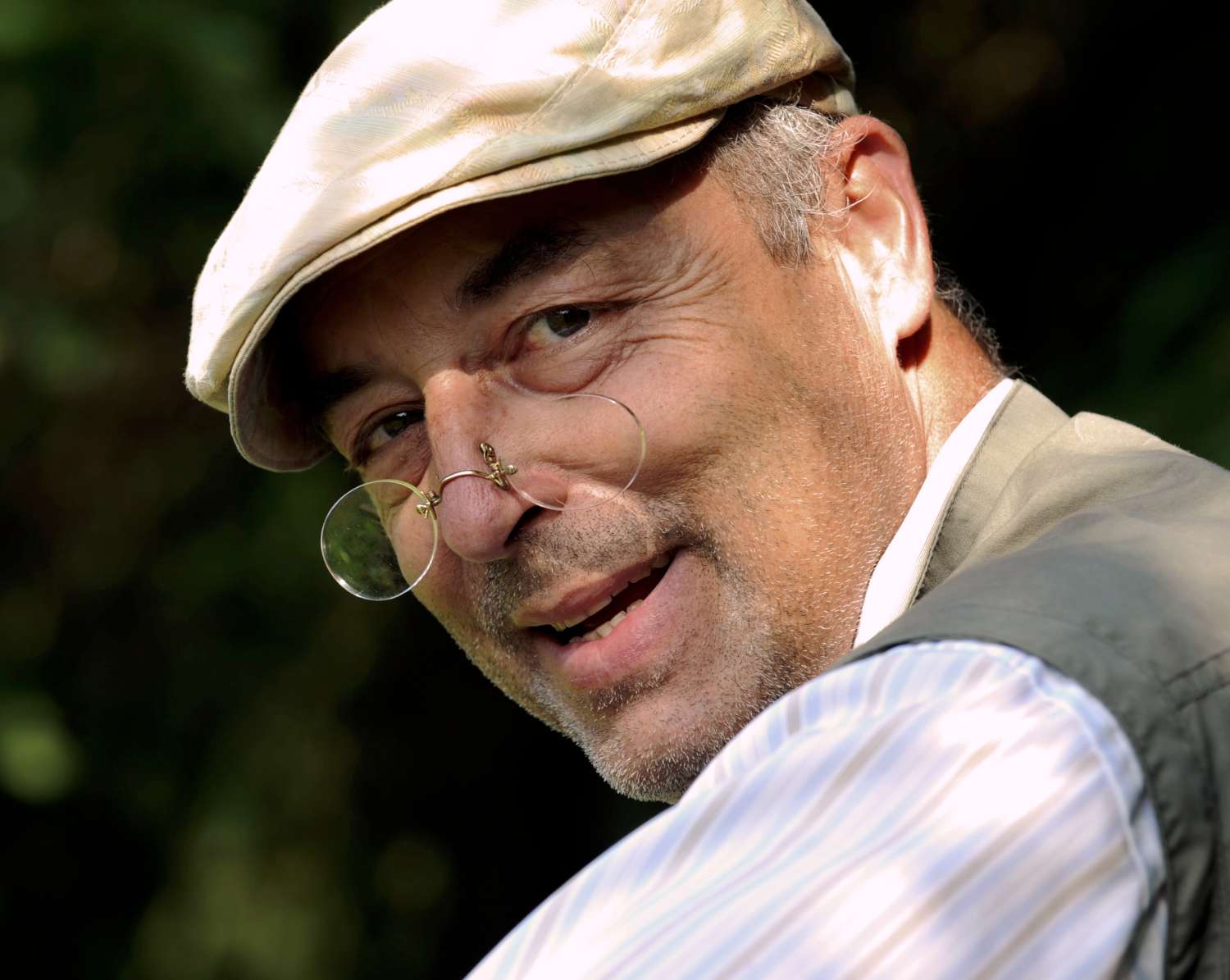