Until this piece was presented in September 2015, the record for the most complicated watch in the world was held by Patek Philippe and its Calibre 89, a gigantic pocket watch 9 cm in diameter, 4 cm thick, weighing 1.1 kg, containing 1,728 parts, two dials and 24 hands, for a total of 33 functions (“complications” in watchmaking parlance). Presented in 1989 to celebrate the company’s 150th anniversary, four of these watches were made, in white, yellow and rose gold, and one in platinum. In 2004, the white gold Calibre 89 was sold for over $5 million.

In 2007, three watchmakers at Vacheron Constantin started work on the Reference 57260, another double-sided pocket watch, and like the Calibre 89, the result, attained after eight years’ work, looks very much like something out of the 19th century. It is just a little larger than the Calibre 89, 98 mm in diameter and 50.55 mm thick, with 2,826 components providing 57 functions, displayed by 31 hands distributed over the two dials on front and back. It is a little lighter than the Patek Philippe piece, weighing 960 grams. Some of its complications are completely new, such as the double retrograde rattrapante chronograph. Normally in this type of chronograph, the two chronograph second hands travel around together, and pressing a pusher stops one so that you can take an intermediate reading, and pressing a pusher again sends the hand that had stopped back to join the other. In the Reference 57260, the two hands operate on two separate retrograde scales, on opposite sides of the dial. 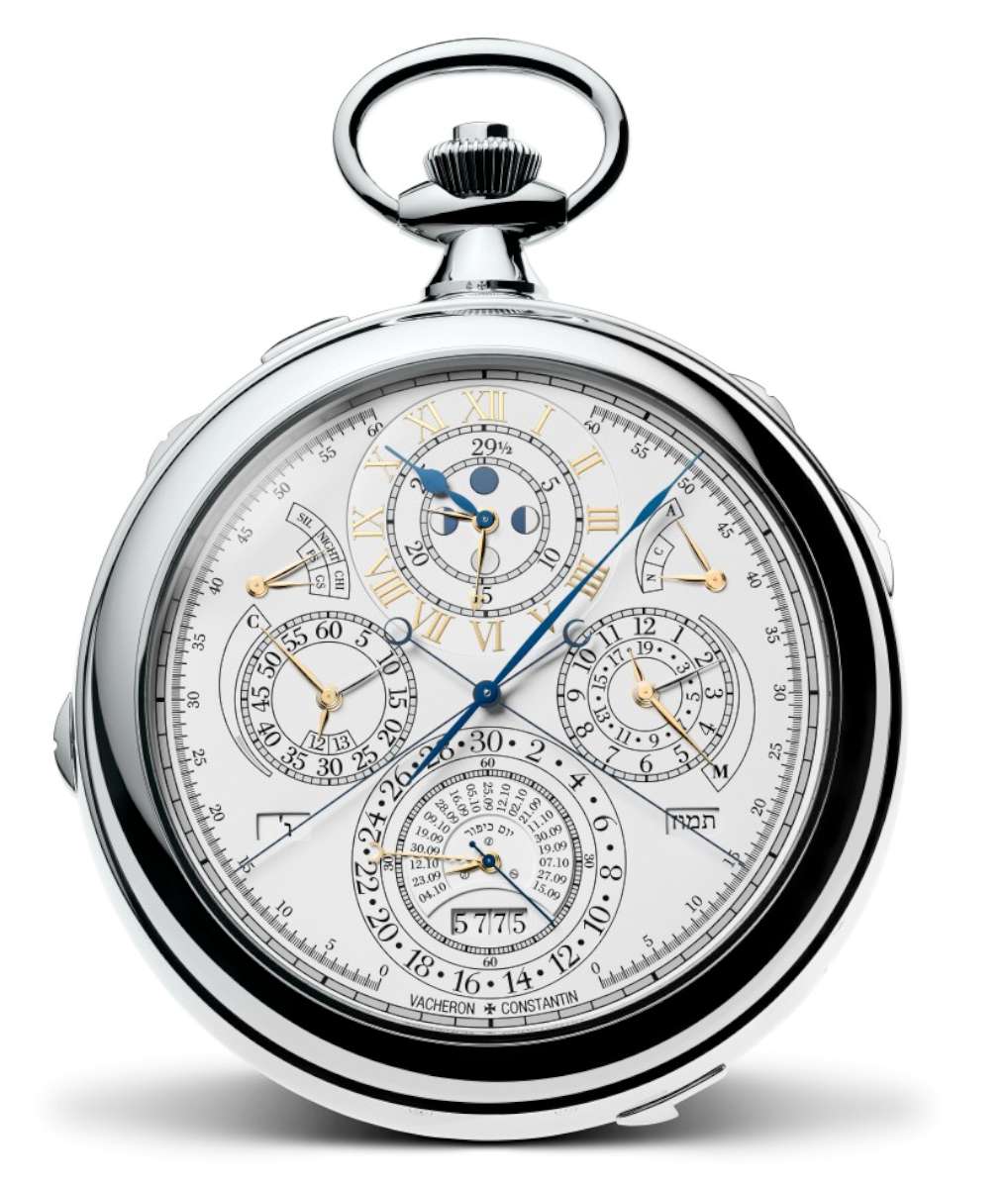 While a Gregorian perpetual calendar is de rigueur for a decent complication watch, the Hebraic perpetual calendar is a different kettle of fish, with its calculations based on both lunar months and solar years, and an overall 19-year cycle for calculating the date of Yom Kippur. The phase of the moon is accurate to one day every 1,027 years (though it has to be said that for this function, Vacheron Constantin is beaten by Ludwig Oechslin who designed a watch with a moon phase indicator accurate to one day every 3,478 years). The Reference 57260 has yet another perpetual calendar, the ISO 8601 business calendar, mainly used in the finance sector for accounting and providing an unambiguous representation of dates and times, based on the number of the week in the year, and the number of the day in the week, with a 400-year cycle. 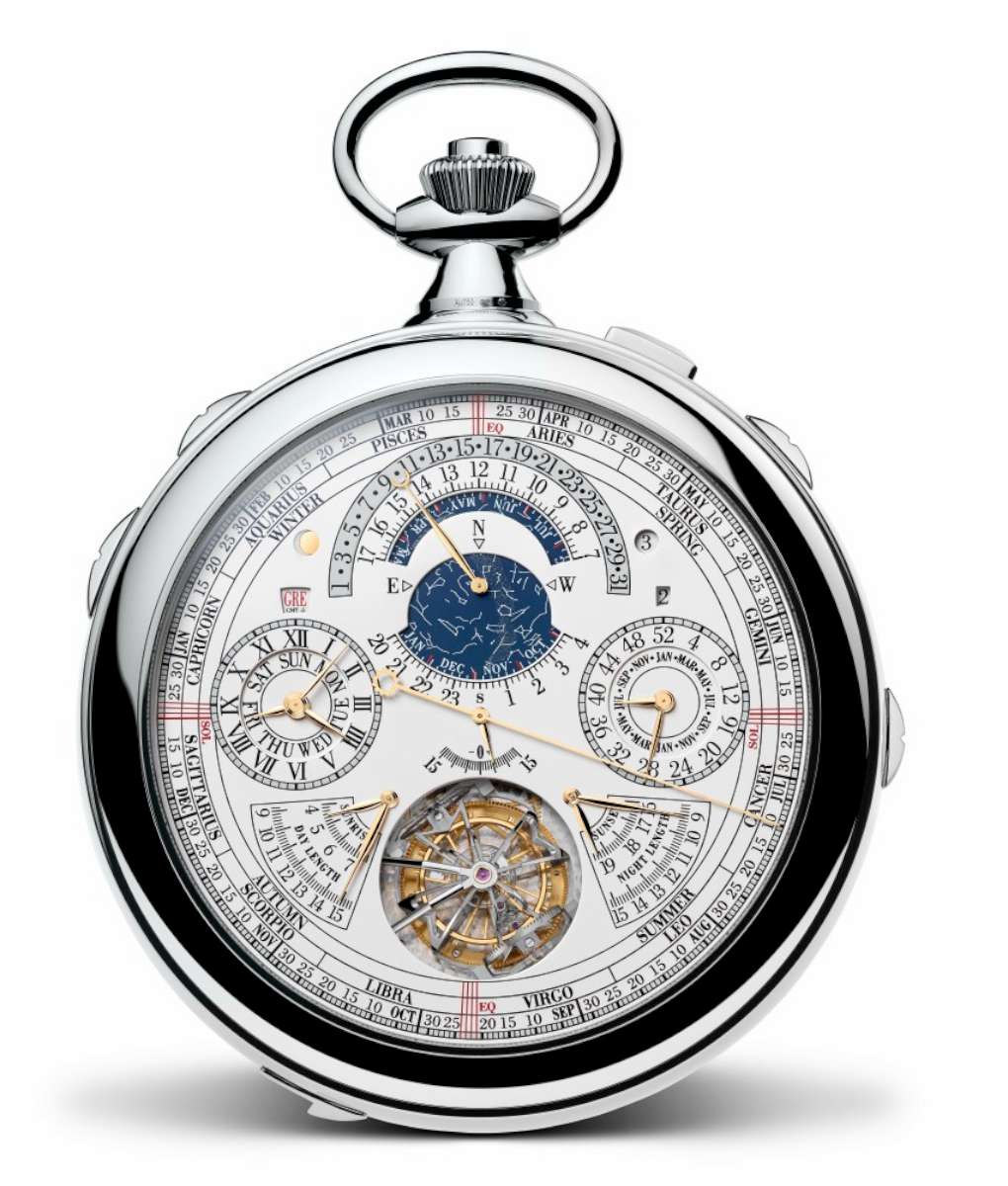 The watch chimes, of course, with Westminster chimes to strike the quarters and the hours, and other options such as Petite sonnerie, in which there is just a single strike on the quarters. Vacheron Constantin has introduced the night silence function for this watch, disabling striking from 10pm to 8am.

The watch’s astronomical functions include a star chart that is personalized to the user’s home city. There are two separate time zone dials, one with day and night indicator, and one with world-time function offering 24 time zones. Just below the sky chart, there is the most visually satisfying part of the watch: the Armillary Sphere Tourbillon, a spherical tourbillon rotating simultaneously in three directions, with a spherical balance spring. 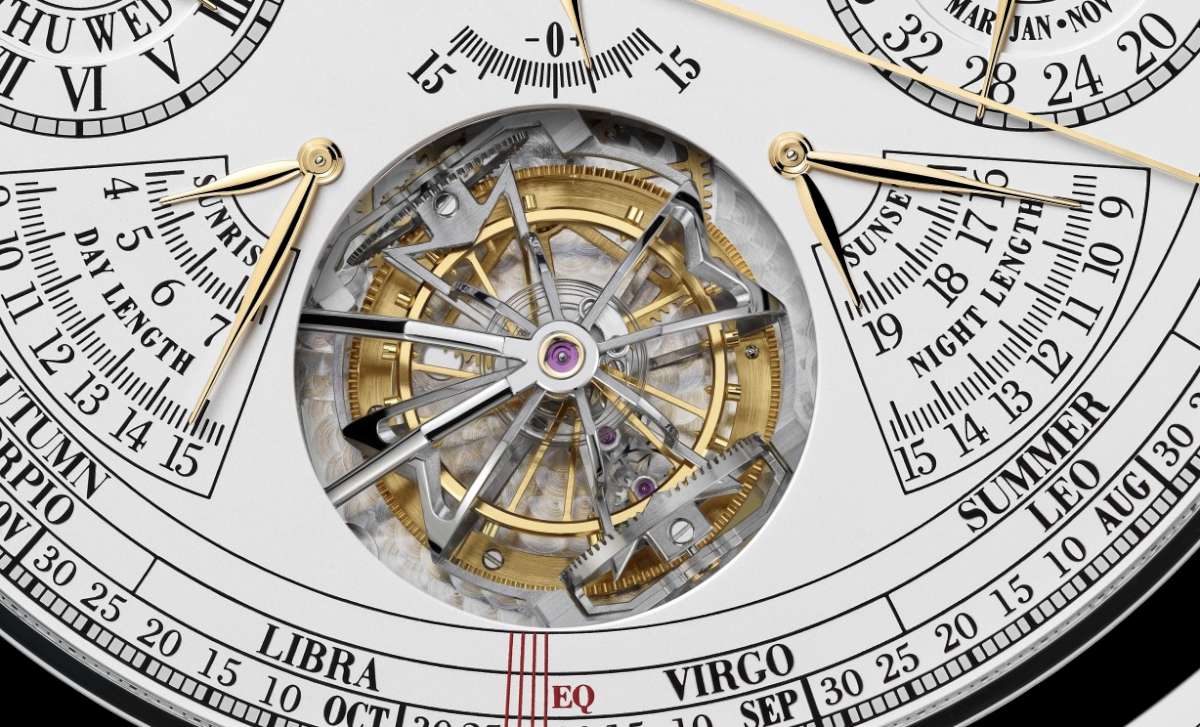 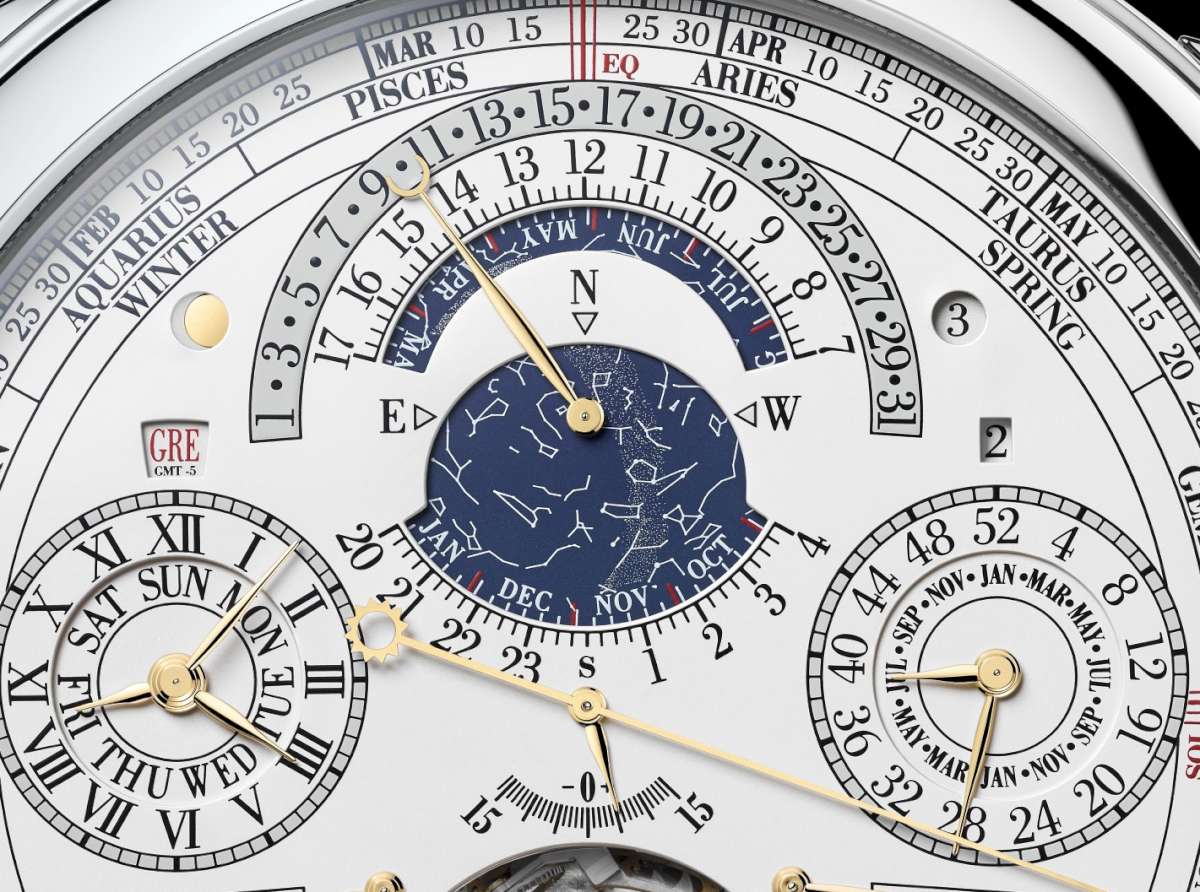 You can find more details of this watch at www.reference57260.com

The complete reference number of this watch is 57260/000G-B046, housing the calibre 3750, a hand-wound movement providing 60 hours power reserve and running at 2.5 Hertz, 18,000 vph. It is a one-off piece made to request by the client, who reportedly paid over $10 million for the watch – and for the pleasure of owning a world record… at least until the next super-complication.

Below, the two faces of the calibre 3750 movement. 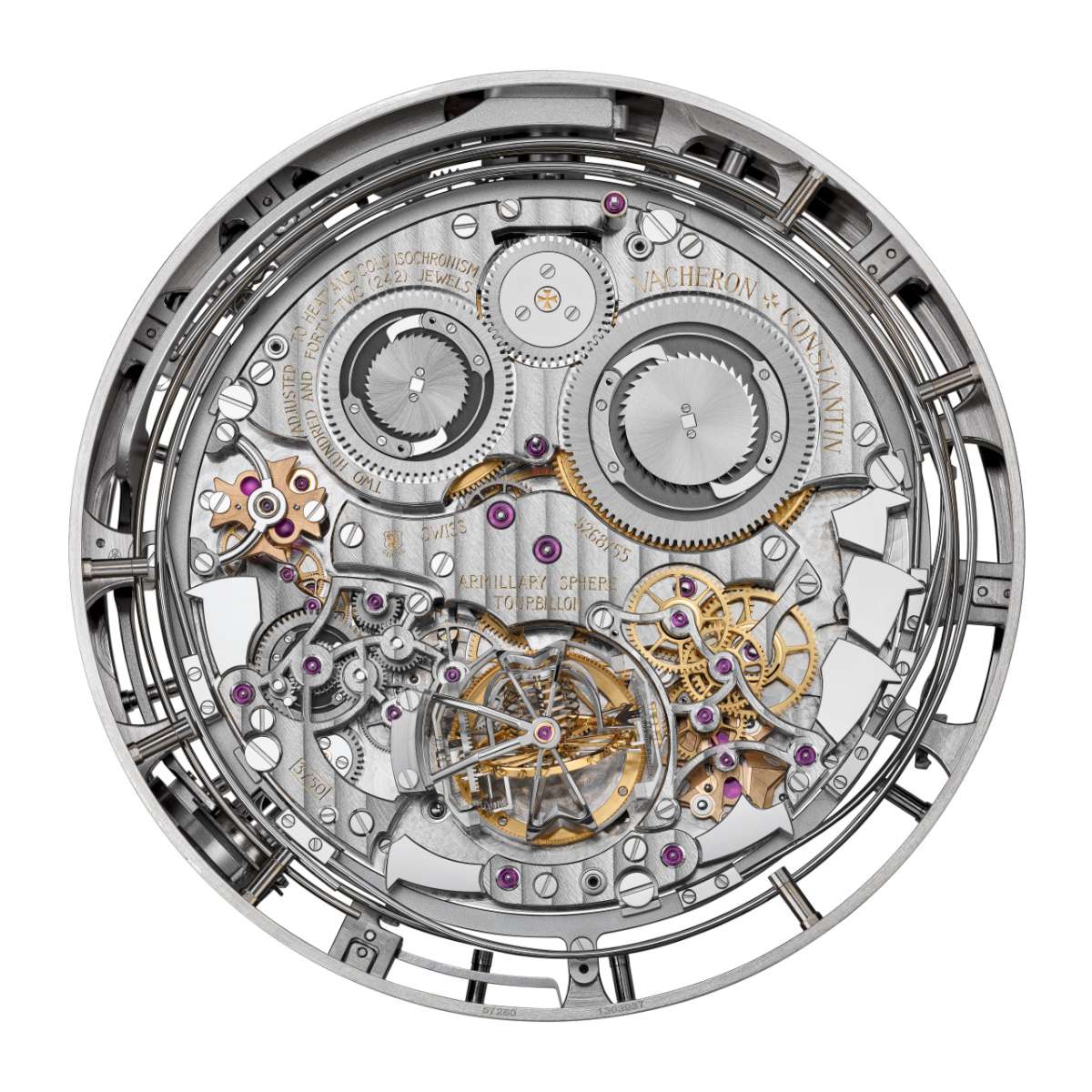 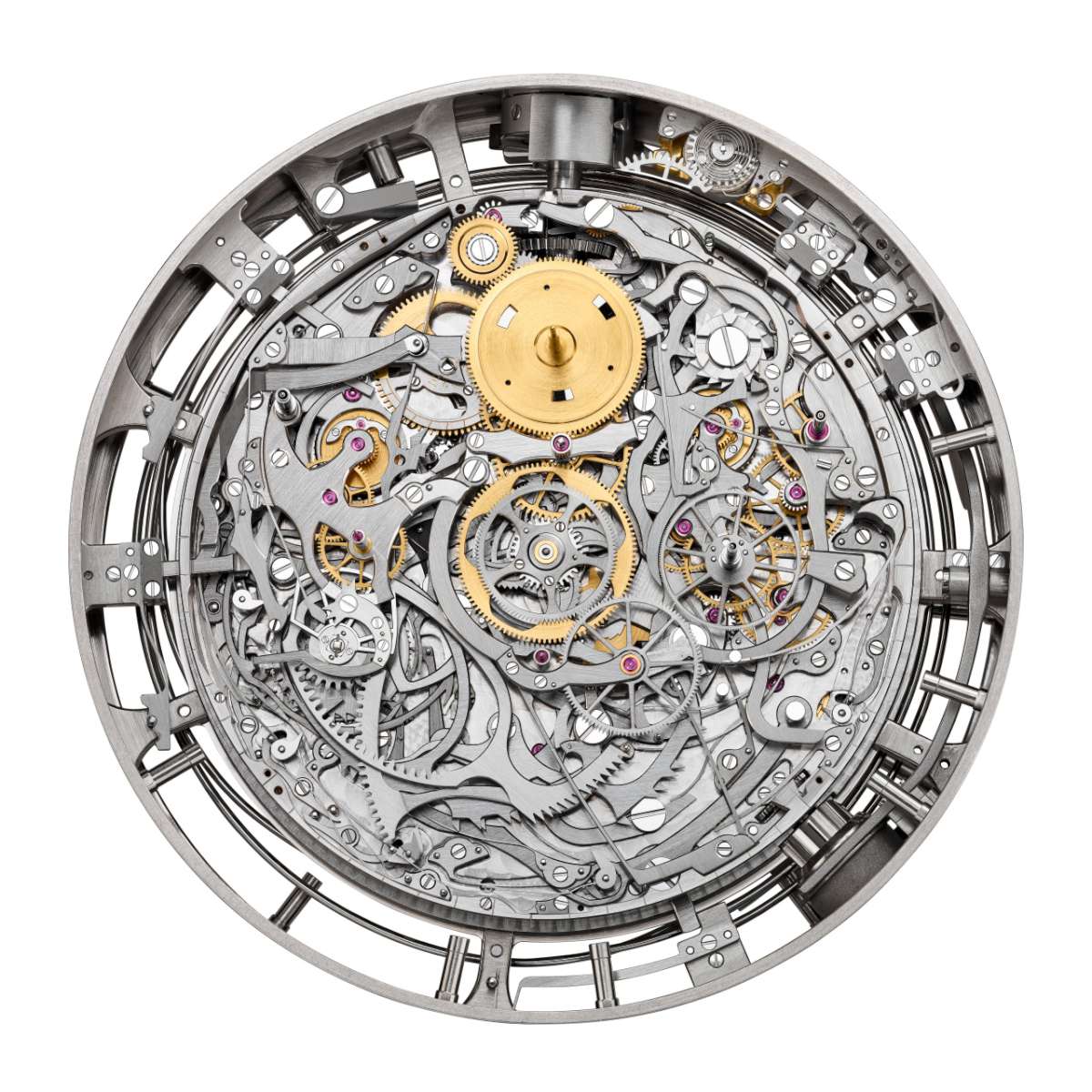 Watch the piece in action at the video below: