Time in second time zone shown on a unique hemispherical map of the globe showing the whole world. Blue oceans are luminescent

Phase of the moon shown as seen in northern and southern hemispheres. White background is luminescent

Pusher for changing time zone, operating when the pusher is released to ensure that the pressure put into the system is constant

Pusher for changing the hour of local time 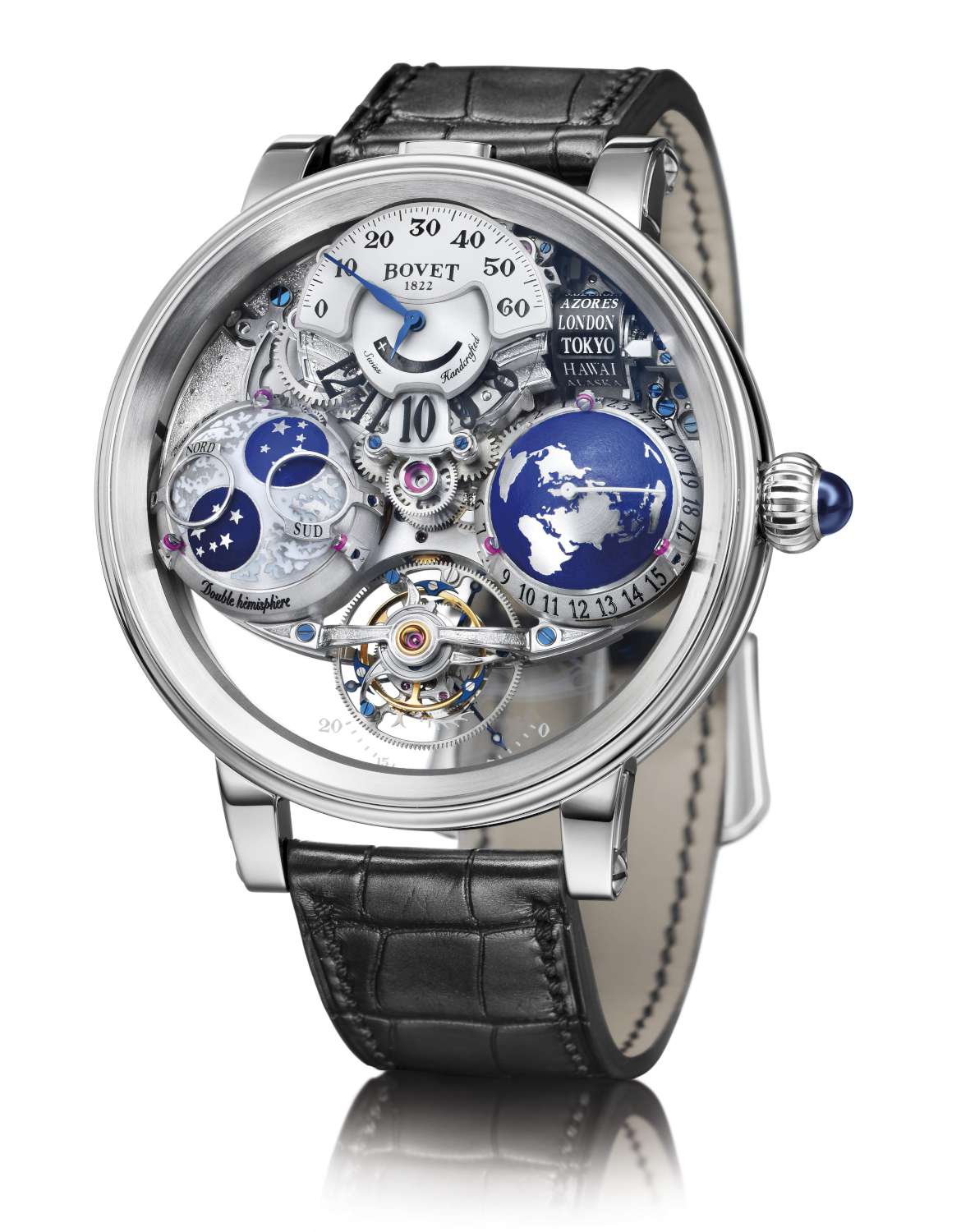 The first timepieces in history were the earth and the moon. Our prehistoric ancestors observed the sequences of day and night, the seasons and the phases of the moon, and used them to devise the earliest forms of measuring time. In this watch by Bovet 1822, the case, 46 mm in diameter and 18 mm thick, contains all this, with a view of the earth and the moon as seen from space, shown in remarkable detail. It’s a powerhouse of innovation, and even though it shares some features with 2015 watches by Jaeger-LeCoultre, Greubel Forsey and Montblanc, it is a very original piece with a lot of technical insight.

Its principal function is a world time display, showing the time in a second time zone, and the corresponding time zone, on the right-hand side of the dial. On the left, a moon phase indicator. At the top, local time is shown by a display with jumping hours and retrograde minutes. At the bottom, a tourbillon. 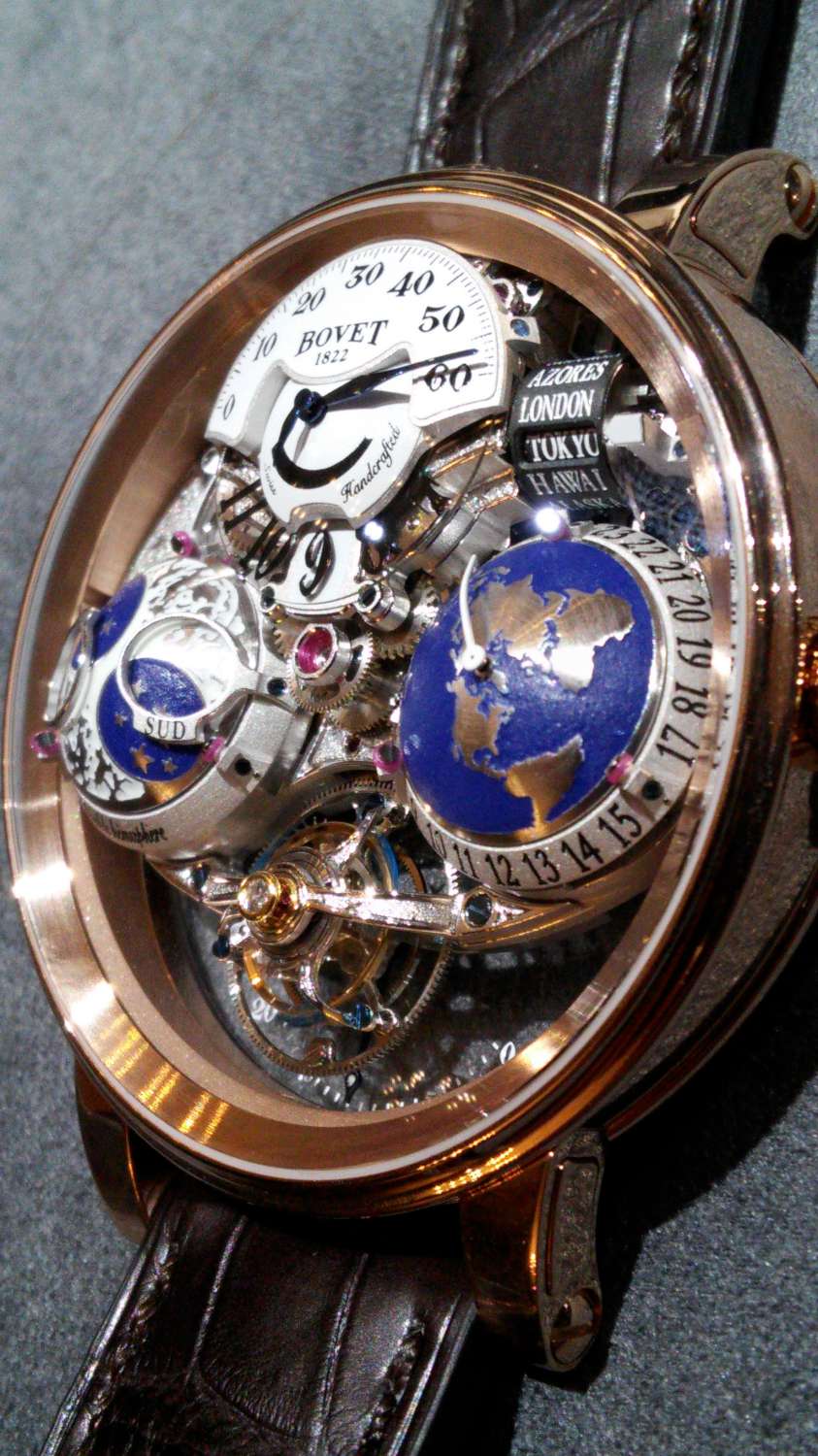 In a watch showing the earth as a hemisphere, the designers have to choose whether to depict the northern or southern hemisphere, and so normally the choice is a bit anti-democratic because the south loses out. In the Shooting Star, a new map of the earth was drawn, so that everything on the globe is represented on a single hemisphere. From the north pole at the top, a hand curves downwards and indicates the hour in a second time zone. You just have to press the pusher at 3 o’clock and the needle rotates through 15 degrees over the surface of the earth, to reach the next time zone. Just above, a roller shows the corresponding time zone with the name of a city. How do you fit 24 cities onto a roller and keep them legible? This is another amazing piece of design, with two concentric rollers, an outer roller with 11 cities plus a window which then enables the other 13 cities to displayed on the inner roller. 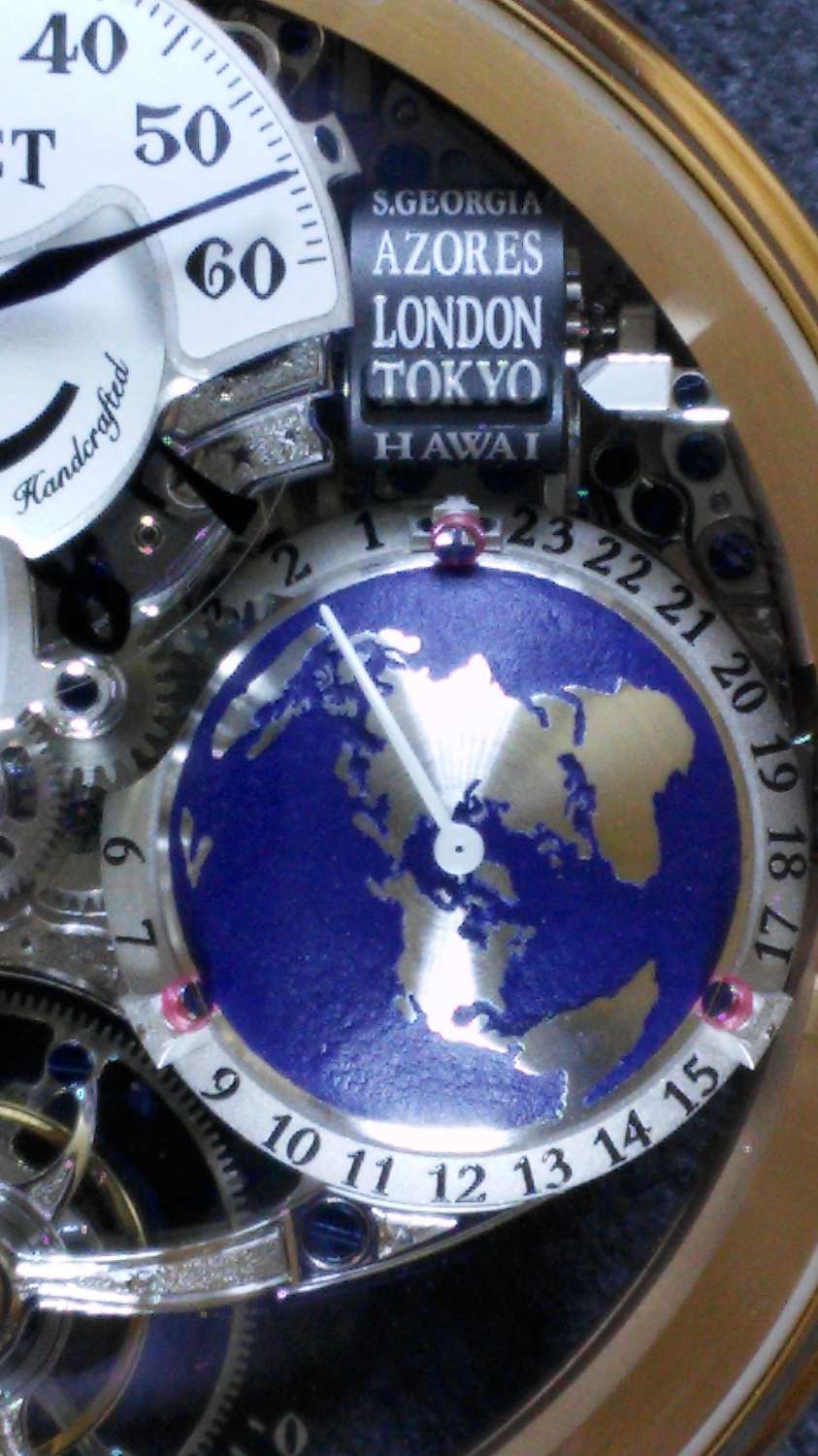 The pusher enabling the user to adjust the timezone operates with a system that incorporates a brilliant idea, devised by Bovet to protect the delicate mechanism. Operating the pusher launches a cascade of spring-loaded movements, and the designers wanted to ensure that the pressure put into the system would always be the same. The problem is that different users place a different pressure onto the pusher, some giving it a respectful and delicate squeeze, others a powerful shove. So everything happens not when the button is pushed, but when it is released! Because whether you are Schwarzenegger or a delicate aesthete, you just remove your finger from the button. A cool idea, and one that Bovet has patented.

The moon phase shows the age of the moon as seen from the northern and southern hemispheres, conserving the watch’s democratic approach. The background has a cratered, lunar appearance, in white, and it is luminescent so that it glows in the dark. On the world time display, the oceans of the earth are also luminescent, glowing deep blue, making the watch spectacular both by night and by day. Circular windows on the lunar hemisphere show the phases, to an accuracy of one day every 122 years. 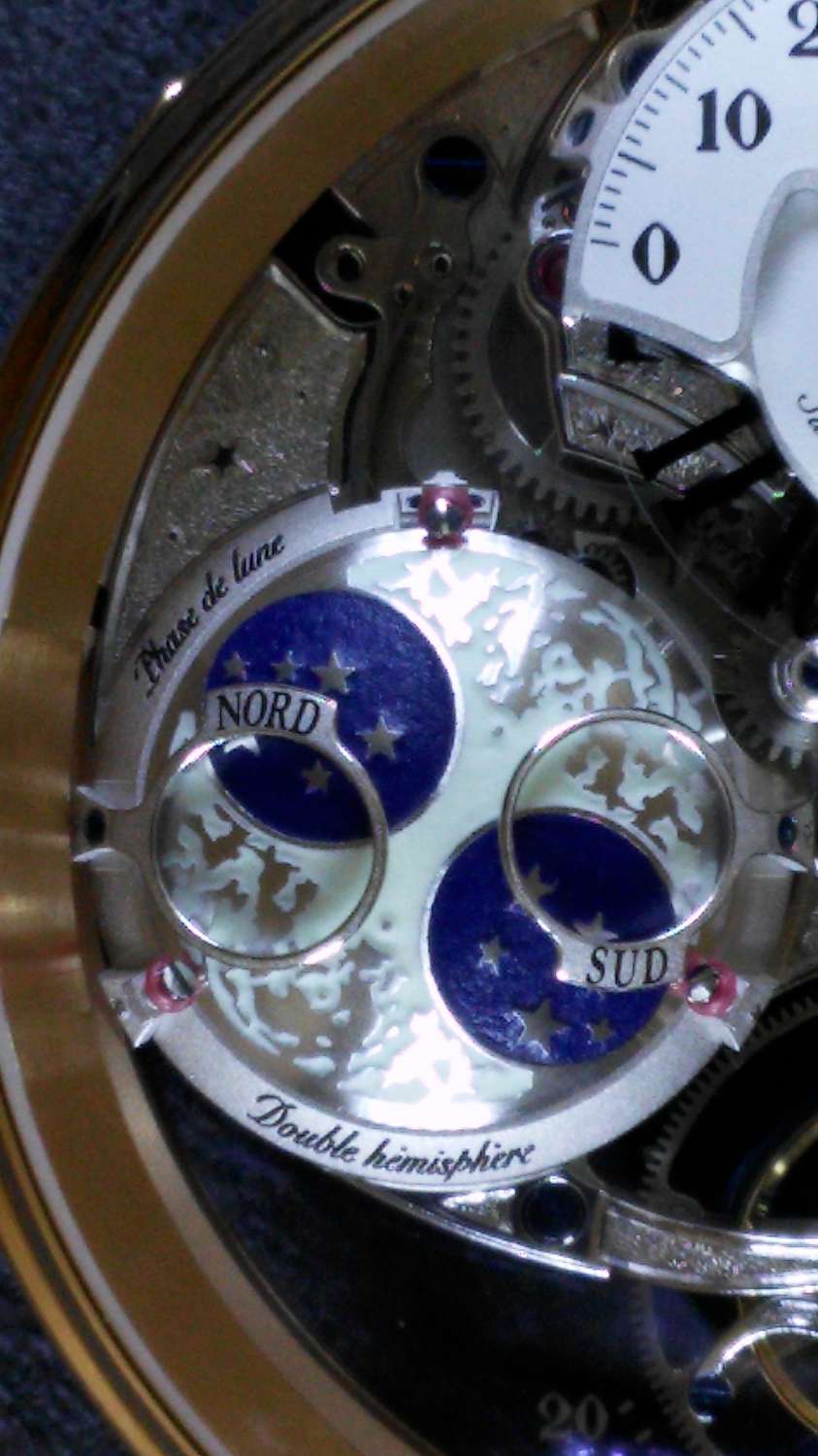 There is another patent in this watch, linked to the movement of the two hemispheres. They are supported from above by three ruby runners, to avoid any pivots on the central axis.

At the top of the watch, the retrograde minutes, jumping hours and five-day power reserve indicator are combined into another assembly that has a curving design, recalling the hemispheres below. On the caseband at 12 o’clock, a pusher enables the hour to be changed with a single push, making the piece ideal for travellers. The local time display is in white enamel or blue aventurine. 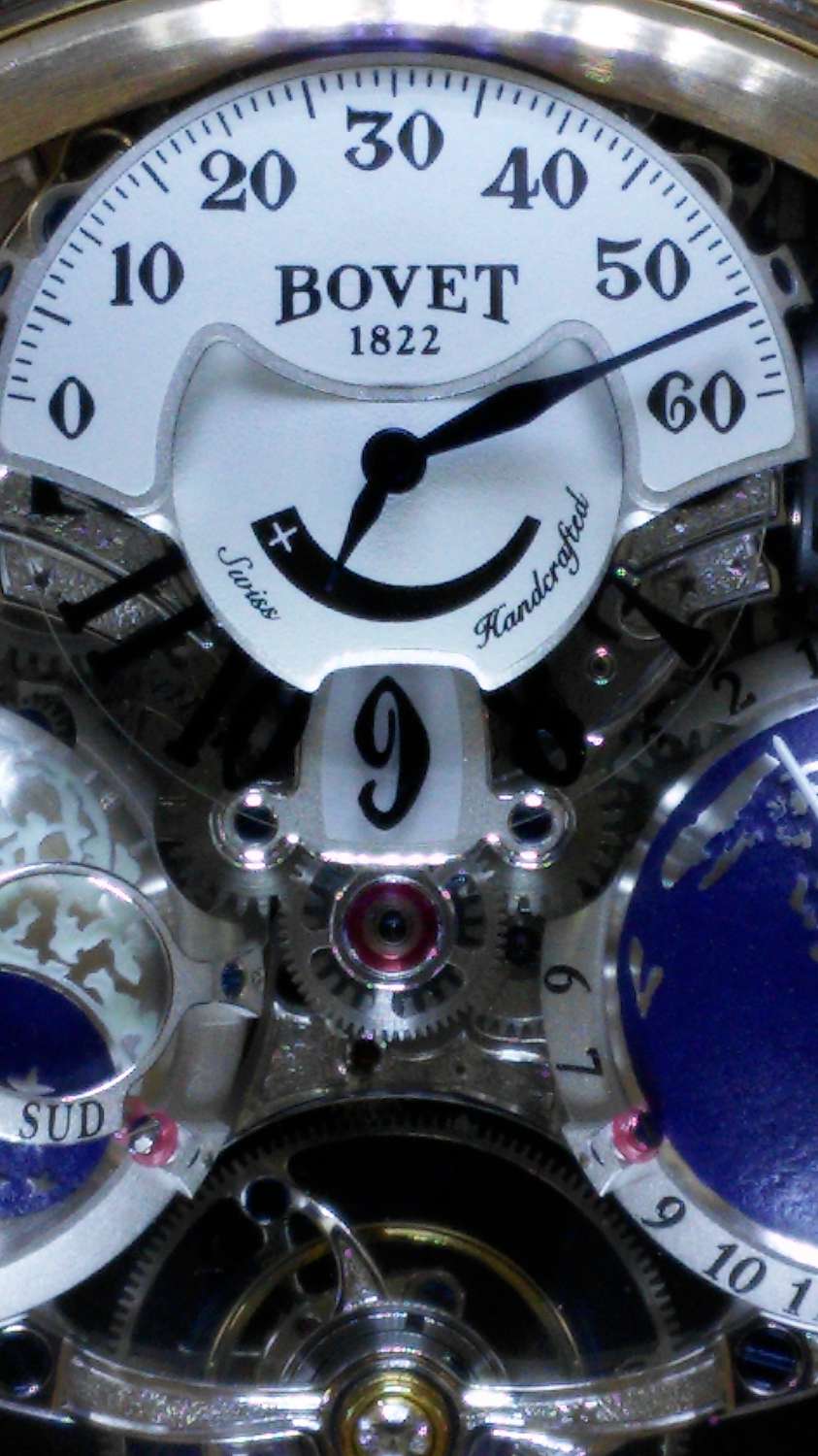 At the bottom of the watch, a one-minute tourbillon escapement running at 21,600 vph (3 Hertz) has a bridge with a curve that mirrors the other displays.

The movement, calibre 17DM01-HU made by Dimier (a company purchased by Pascal Raffy along with Bovet 1822 in 2001), can be seen through the transparent caseback, with bridges decorated with stars and a depiction of a moon phase, and two hand-engraved hemispheres. 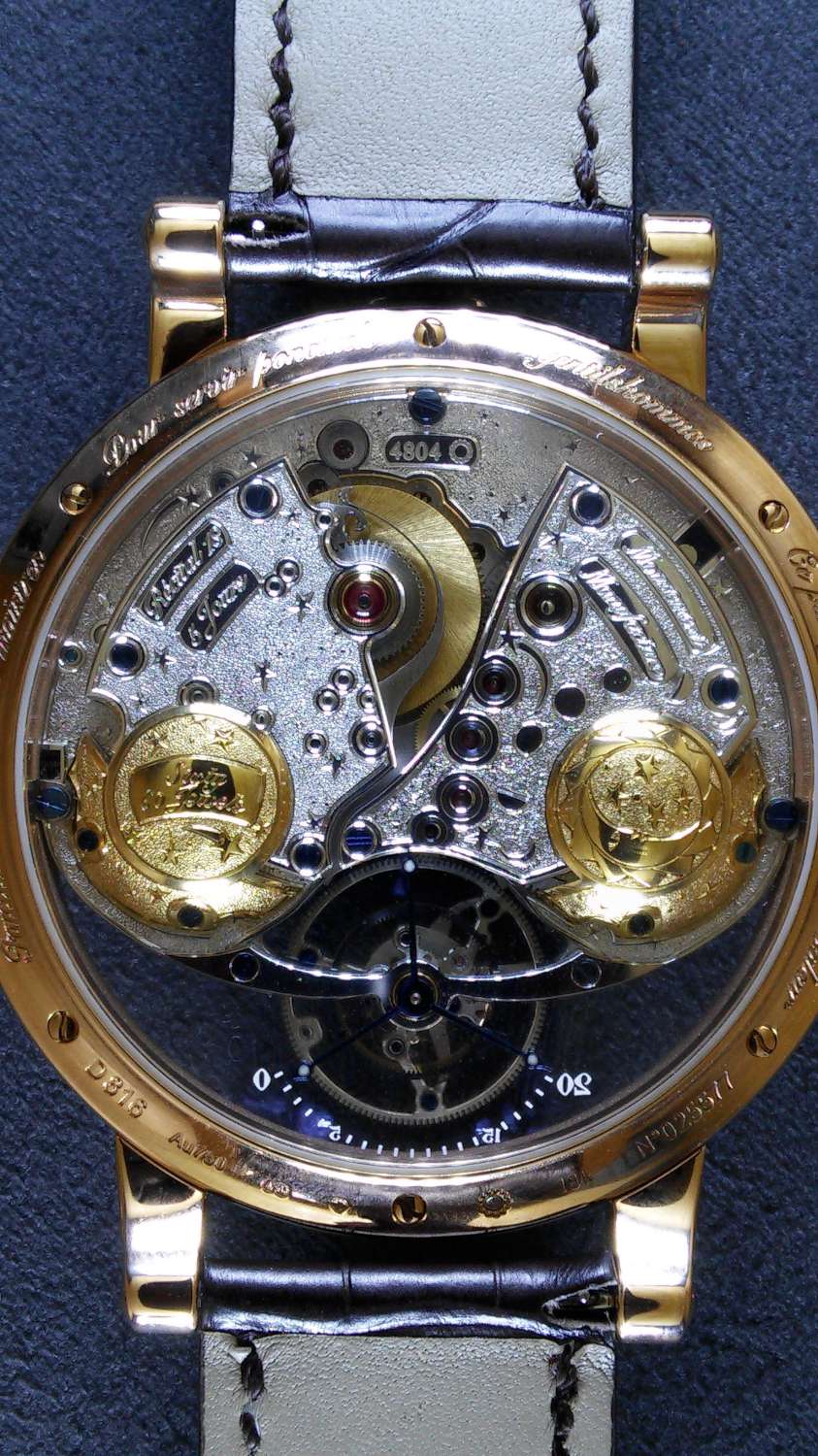 Price of the Bovet 1822 Shooting Star

The watch is made in two versions, in red or white gold, and it is a limited edition of 50 pieces. Each costs 295,000 Swiss francs. It is a theatrical piece with a vast amount of detailing, and a lot of heritage, including the phrase in old Swiss French that Bovet place on every watch with an in-house movement. It is on the caseback, and it translates as “To serve a punctual gentleman, (a watch) of great valour and quality made by the hands of masters.” 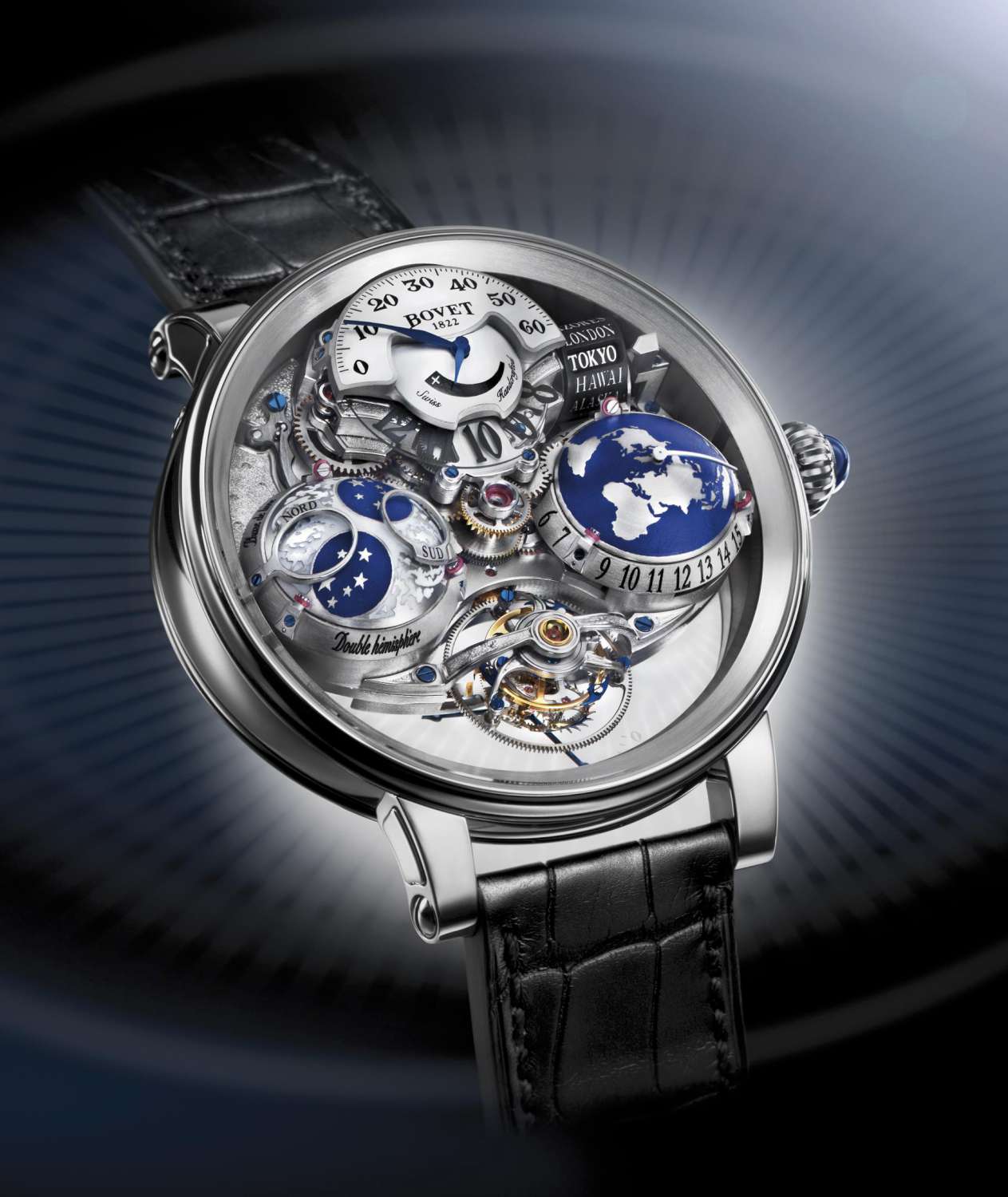