Handle that operates a Maxon generator charging a super capacitor

Hours and minutes, coated with SuperLuminova for night-time visibility

Watch precision indicator (balance wheel frequency) measured by optical device and compared to a 16 million Hertz quartz oscillator. Frequency can be adjusted by the owner

Crown for winding and timesetting

Button that pops out the crown 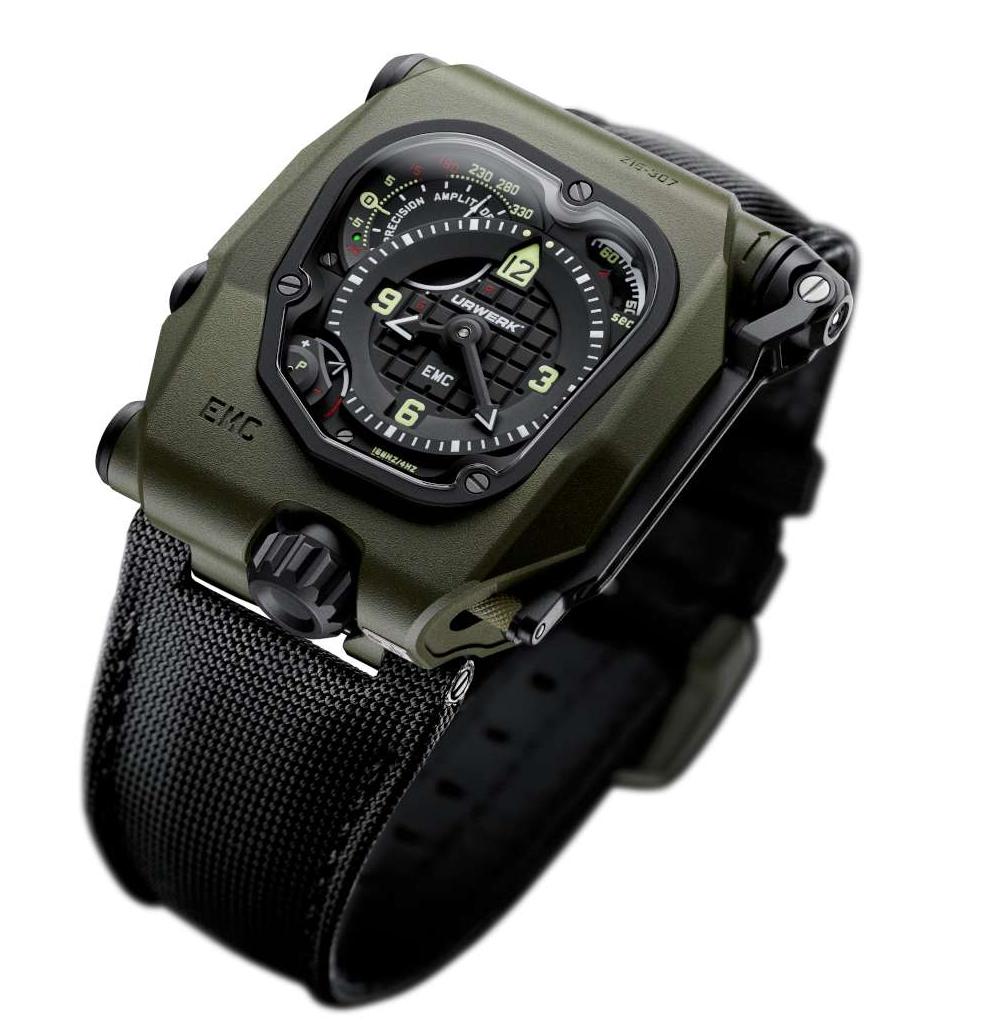 One of the most surprising things that is happening in high-end watches is that the hallowed ground of mechanical movements is beginning to be violated by electronics. One example is the Piaget Emperador Coussin XL 700P presented at SIHH 2016, which has a totally mechanical gear train powered by a conventional oscillating weight, but also a tiny generator that produces enough electrical current to power a quartz timing device that ensures that the regulator maintains a very high precision. Another interesting concept is the HYT H4 Metropolis, presented in 2015, in which you can illuminate the dial by winding the lower crown for about 5 seconds, which generates enough electrical energy to light the display so you can see the time in the dark. 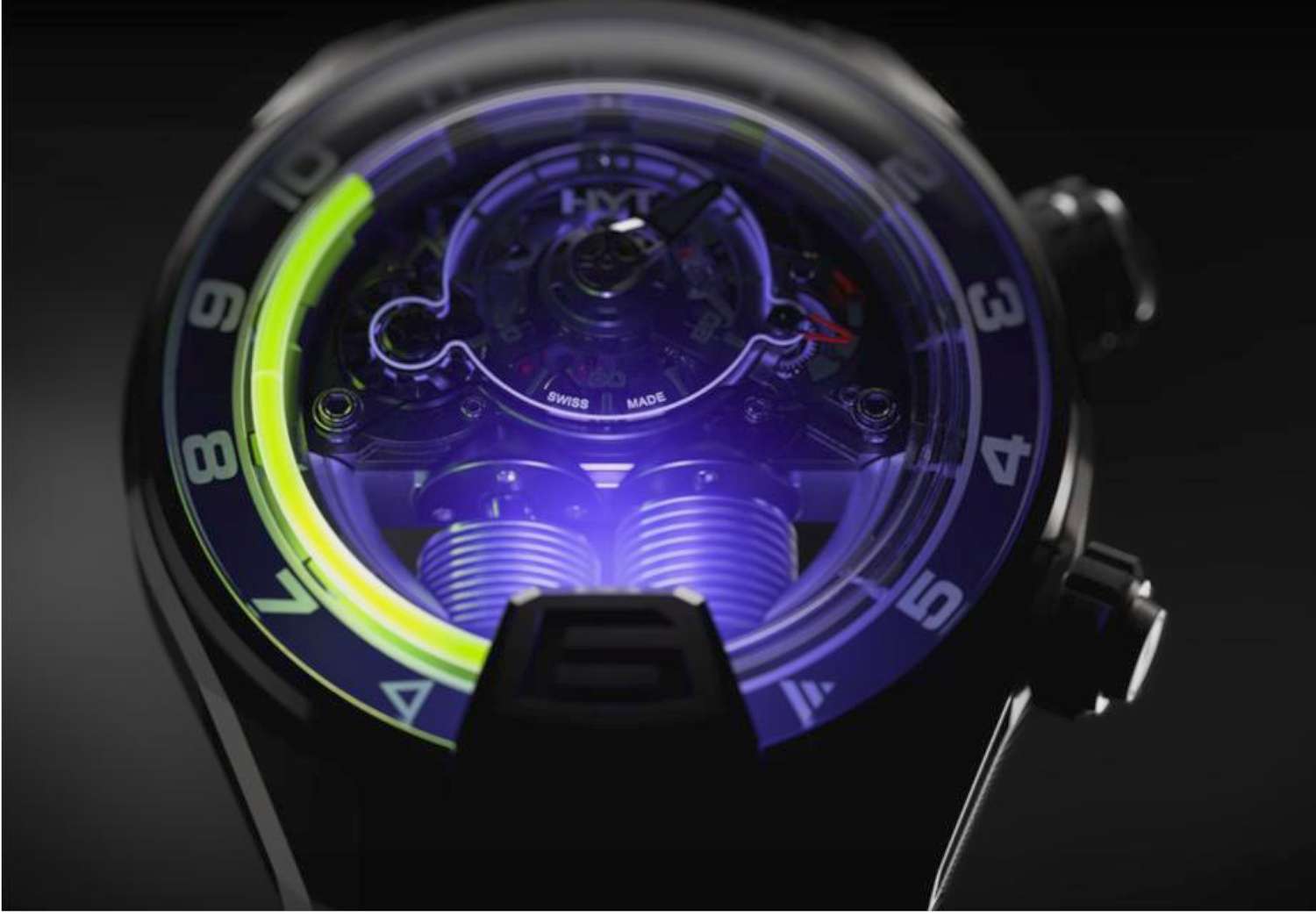 Then there is the Midnight Nuit Lumineuse presented by Van Cleef & Arpels, presented at SIHH 2016, in which the movement causes a strip of ceramic to vibrate, so that it produces enough electricity to light a few micro-LED bulbs behind some diamonds on the dial that glow star-like for a few seconds, on demand by pressing a pusher.

But perhaps the most interesting watch using this crossover with quartz and electronics is the EMC Time Hunter by Urwerk, also presented at SIHH 2016. This is a totally mechanical watch that is important for the brand for several reasons. Firstly, it has hands. Up until now, all of Urwerk’s watches were distinctive for their totally original methods of displaying time, which is a distinctive part of its DNA. The Time Hunter on the other hand has a conventional hour and minute display. Secondly, it has a 100% in-house movement, UR-EMC2. Urwerk’s previous watches have base movements by Girard-Perregaux or Zenith, with proprietary modules creating the unusual displays. This piece has a movement designed and made in the brand’s workshops in Zurich and Geneva, with their own balance wheel. Urwerk’s co-founder and watchmaker Felix Baumgartner said,.”As a watchmaker, I am quite proud of Urwerk developing, manufacturing, and regulating our own balance wheel for EMC as very few brands actually make and regulate their own balances and they really are the heart of mechanical movements.” 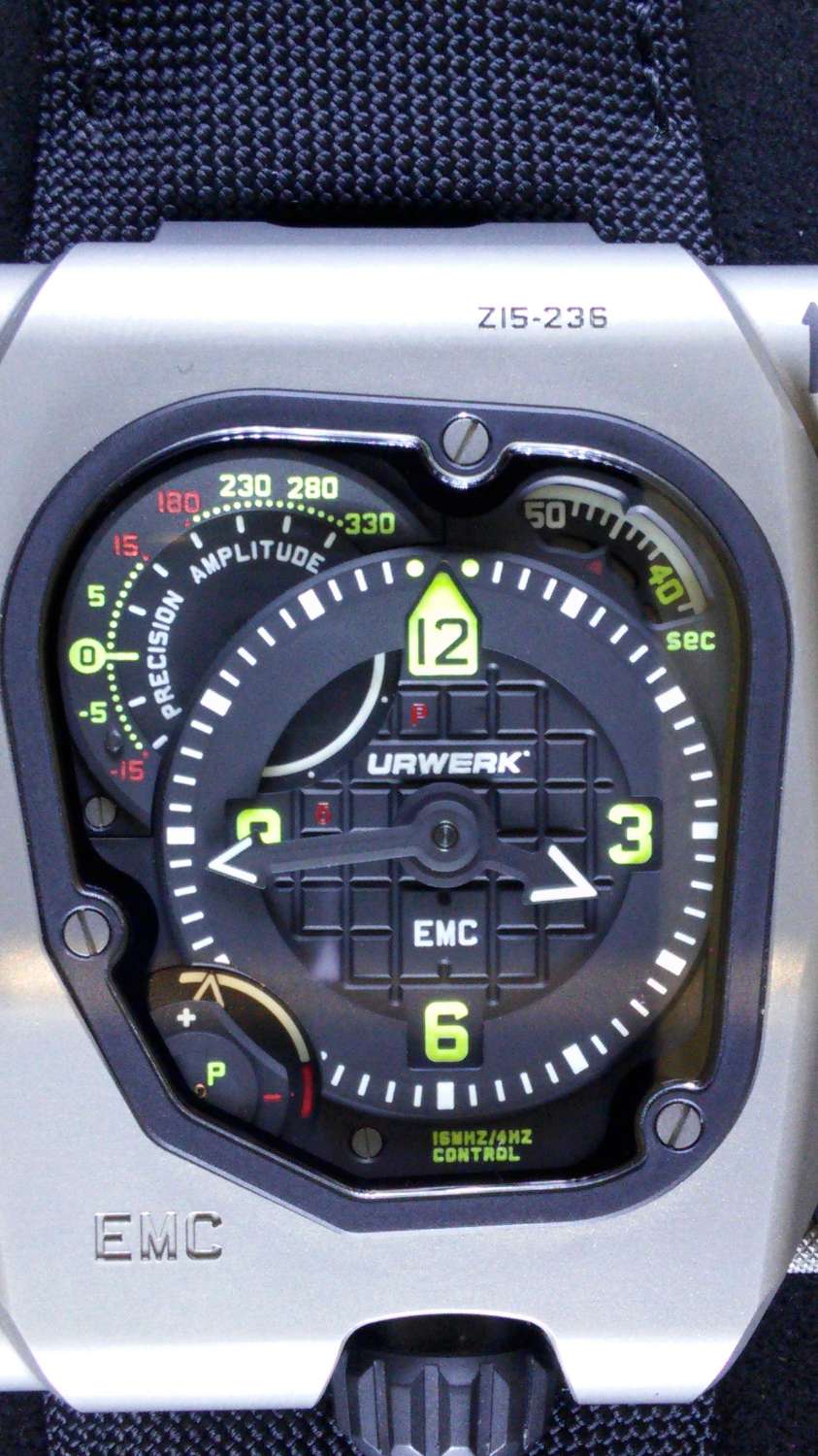 On the right-hand side of the case there is a prominent handle that can be lifted up and cranked, rather like the winder that you used to rewind the film on a traditional SLR camera (does anyone remember those?). Winding the handle produces electricity that is then stored by capacitors and used to power a system that calculates the balance wheel’s oscillation rate and amplitude. It then presents the results of its discoveries in a sequential display at the top left, showing first the degree to which the watch is running fast or slow, and then the amplitude. This enables the owner to check the state of health of his or her watch. If it needs adjusting, this can be done by the owner, by turning a screw on the caseback which modifies the length of the balance spring. On most other mechanical watches, this operation can only be performed by a watch repairer. 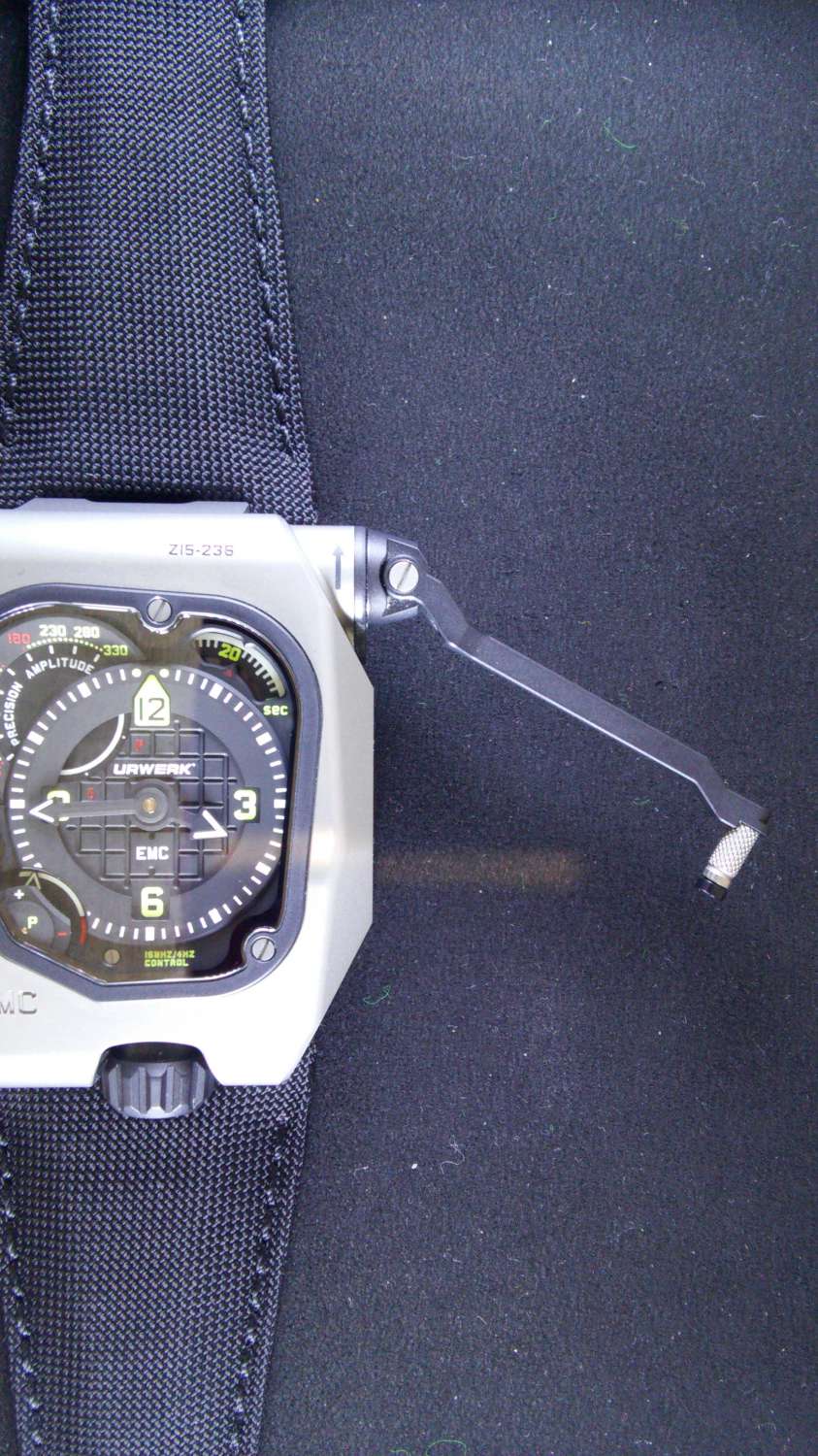 The system used to calculate oscillation frequency and balance-wheel amplitude is optical. These two values are fundamental in determining the state of any mechanical watch, and the machine used by watchmakers is based on audio receptors that pick up the sounds produced by the movement. This watch on the other hand uses an optical sensor above and below the balance. The data is then sent to a tiny computer on the right of the watch’s movement side, where it is compared to a benchmark produced by a quartz crystal oscillating at 16 million Hertz. The computer then presents the results on the two dials at top left. 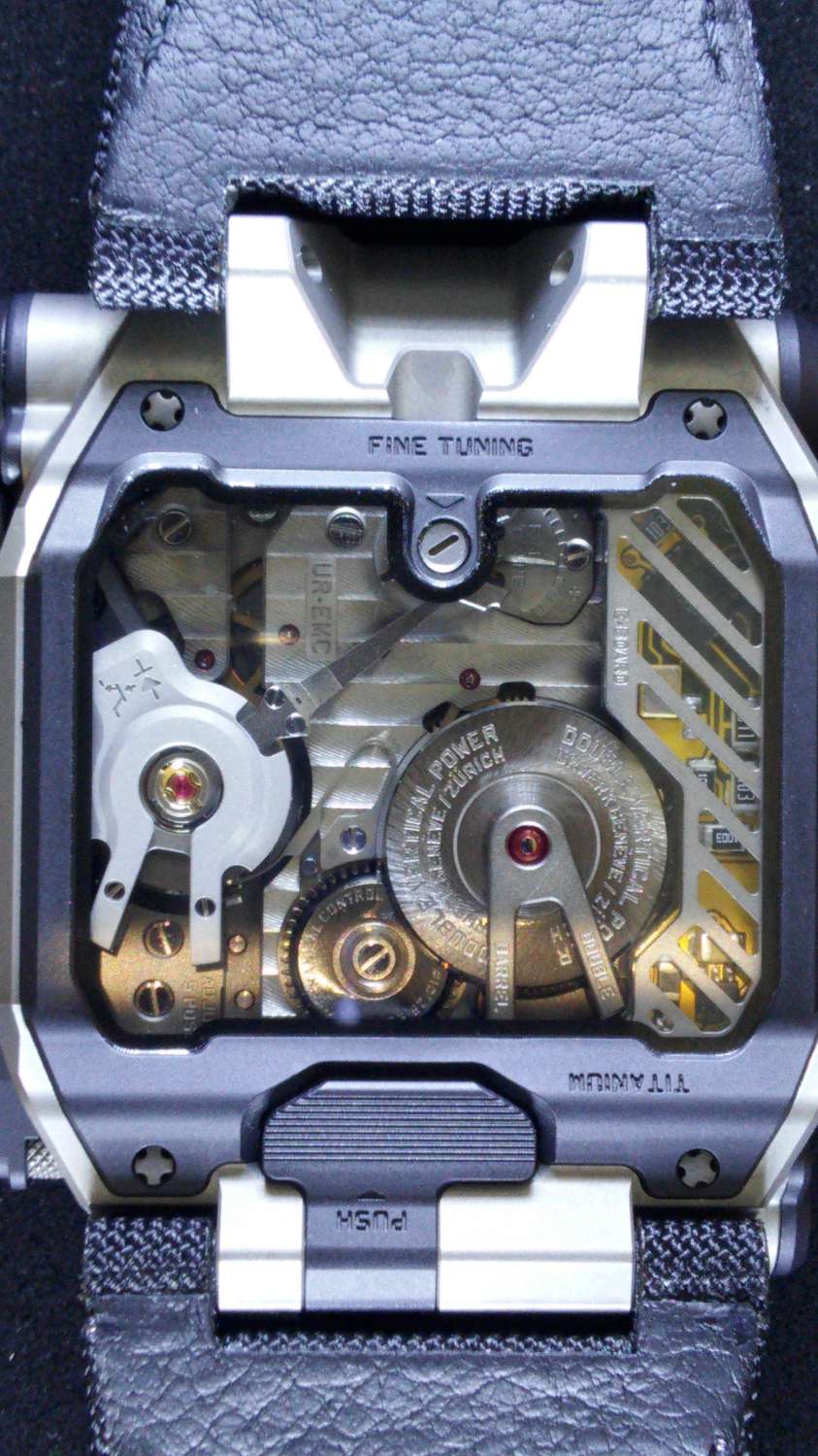 While there is no problem in understanding why a change in balance-wheel frequency causes a mechanical watch to lose precision, the question of amplitude is not immediately obvious. The concept of the pendulum, and equally the balance-wheel, which oscillate back and forth, is that its frequency of oscillation remains constant whatever the amplitude. This was discovered by Galilei in church one day in Pisa back in 1581, when he was idly watching a chandelier swinging as a result of the draught, and (using his pulse to time the swings) saw that the oscillation rate remained the same whether the swings were short or large. So why does a change in amplitude change the accuracy of a balance-wheel? Because of that enemy of all watchmakers, friction. The effect of friction varies according to the speed of the balance, and it is caused by the balance pivot, and the air resistance of the balance-wheel. So watchmakers try to ensure that the amplitude is between 220 and 280 degrees. If increased friction, caused by the deterioration of the lubricating oil, reduces amplitude, the watch loses precision and needs maintenance.

The system is very simple to operate. There is an indicator that shows whether you have wound the handle enough, but in actual fact, you just have to wind it say ten or twenty times and you’re OK. The results are shown on scales with gree or red markings to show whether parameters are good or need adjustment. The idea of the owner adjusting the watch is a nice touch, wholly in line with the brand’s liking for interactivity.

The watch incorporates some other interesting features. The balance wheel is made of the light alloy Arcap, non-magnetic and non-corrodable, and it has an unusual shape, a flat disc without the usual adjustment screws seen in most traditional watches. Those screws were used to adjust balance rate but this required expert intervention. In this watch, as already mentioned, the adjusting screw acts on the balance spring. The movement runs at 4 Hertz, 28,800 vph. Another featue of the movement consists of the double mainspring barrels, stacked vertically and connected in series, providing 80 hours power reserve. The movement is wound by hand using the crown at the bottom.

Usually at Urwerk, designer and co-founder Martin Frei generally starts work on sketches based on his and Felix’s ideas for the watch. In this case, it was different. Martin said, “With EMC, the technical features of the timepiece were already established and this made my task that little bit trickier.” The result is a very legible watch with a touch of military appearance, above all in the green version. The case is 43 mm in width, 51 mm in lenght and 15,8 mm thick, with a titanium steel case. 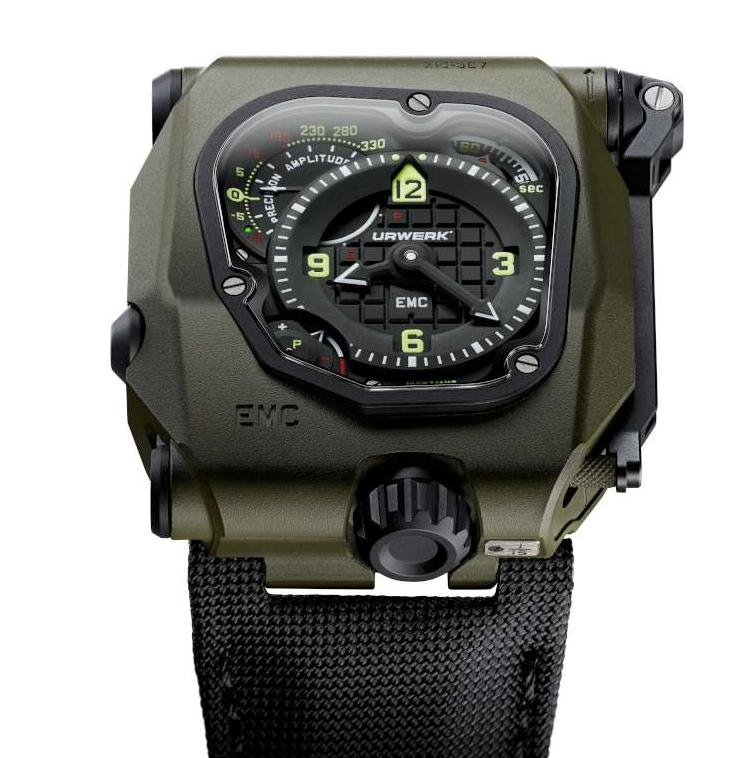