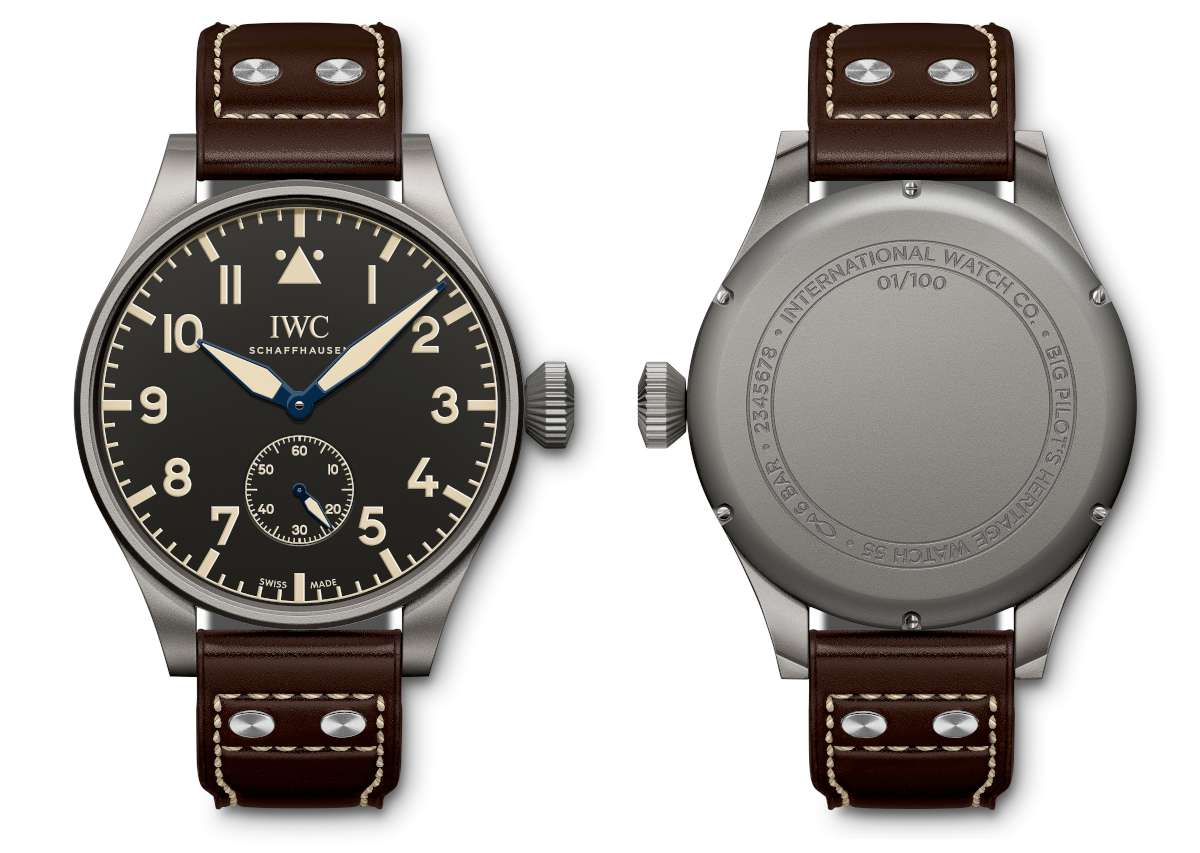 Make no mistake about it, IWC’s latest collection of pilot’s watches presented on 18 January at SIHH in Geneva is phenomenal, a whole range of timepieces that includes technically innovative watches such as the Pilot’s Watch Timezoner Chronograph in which a second time zone can be set by turning the bezel, and pilot’s watches in smaller size that are petite and elegant enough to appeal to women as well as men. There’s only one piece about which I have some doubts, a piece that in a way is closest to IWC’s pilot’s watch history: the Big Pilot’s Heritage 55. This, with its smaller 48 mm version, was presented as a preview and I wrote about it here.

Georges Kern, CEO of IWC Schaffhausen, says, “We’re producing the sizeable and authentic Big Pilot’s Heritage Watch, an observer’s watch that’s strongly reminiscent of the Big Pilot’s Watch of 1940.” The Big Pilot’s Heritage Watch 55, reference IW510401, has the same massive size of the historic original, 55 mm. It has the same calfskin strap with double rivets on either side, and a similar cone-shaped crown. The dial indications are substantially similar. So why, why did the designers replace the central seconds hand of the original with a small seconds subdial at 6 o’clock? 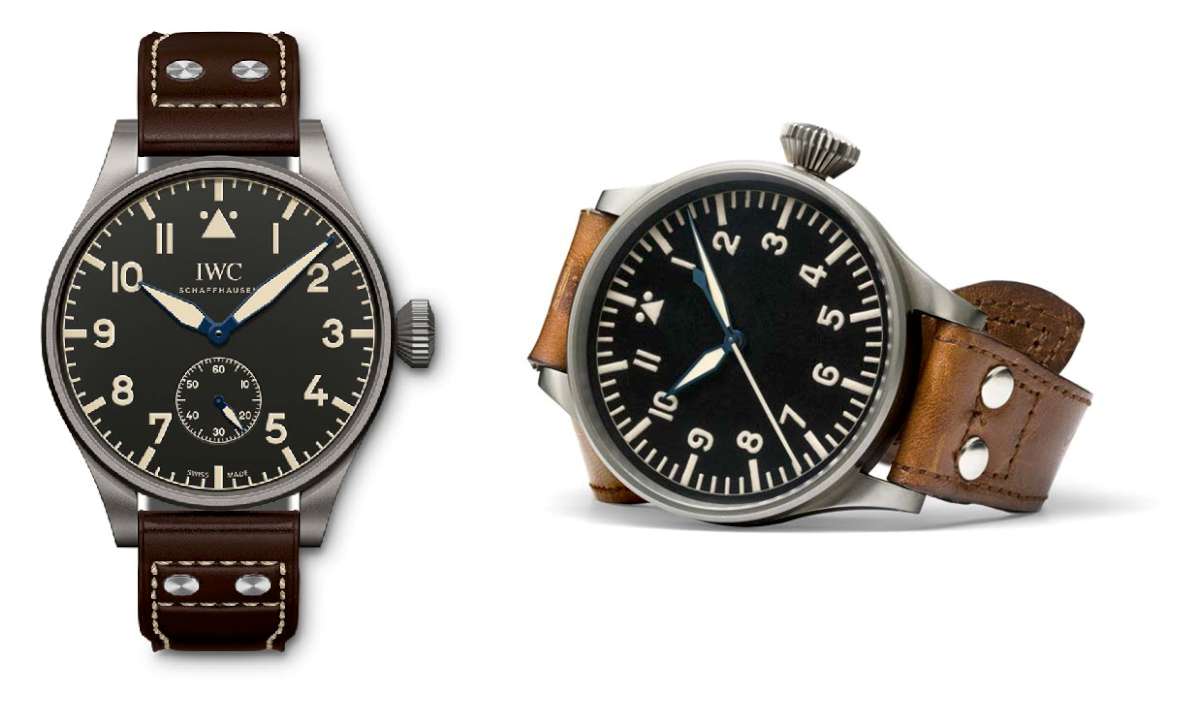 In a design presentation at SIHH on 20 January, Christian Knoop, Creative Director at IWC, provided his point of view. “In general, IWC takes an evolutionary approach to design, so it’s important to respect the code. What’s fundamental is that when people see the watch, they say ‘Oh, that’s an IWC’. It was important not to create a remake. Some collectors ask for this but there’s no point. Our idea at IWC is to keep changing and improving. With our Heritage piece, we wanted to add something. We added a small seconds dial.”

The original Big Pilot’s Watch, 52-calibre T.S.C., with the abbreviation referring to the central seconds hand (Tirette Seconde Centrale), had an IWC-manufactured movement inside a stainless steel case, and it weighed in at 183 grams. The new IW510401 has a titanium case and so weighs less than 150 grams. The original had the stop-second feature so that pilots and navigators could synchronize their watches to the second. The IW510401 also has this function, provided by the IWC hand-wound calibre 98300 movement.

The movement determines the design

In my opinion, it’s the 98300 movement that provides the answer to why IWC replaced the central seconds hand with a small seconds subdial. It’s a movement that IWC already had, based on the 98295 and previously used in the Vintage Pilot IW3254 presented in 2008. That watch had a 44 mm case, and the calibre 98300, 37.8 mm in diameter, was perfect for that case size, and IWC gave it a sapphire caseback to reveal the finely-finished movement. Using the calibre 98300 for the Big Pilot’s Heritage Watch 55 imposed two limitations on the designers: a small seconds dial in a position closer to the centre of the watch than in the Vintage Pilot, and a solid caseback, because otherwise the sapphire caseback would have been notably smaller than the diameter of the case, an unattractive porthole. 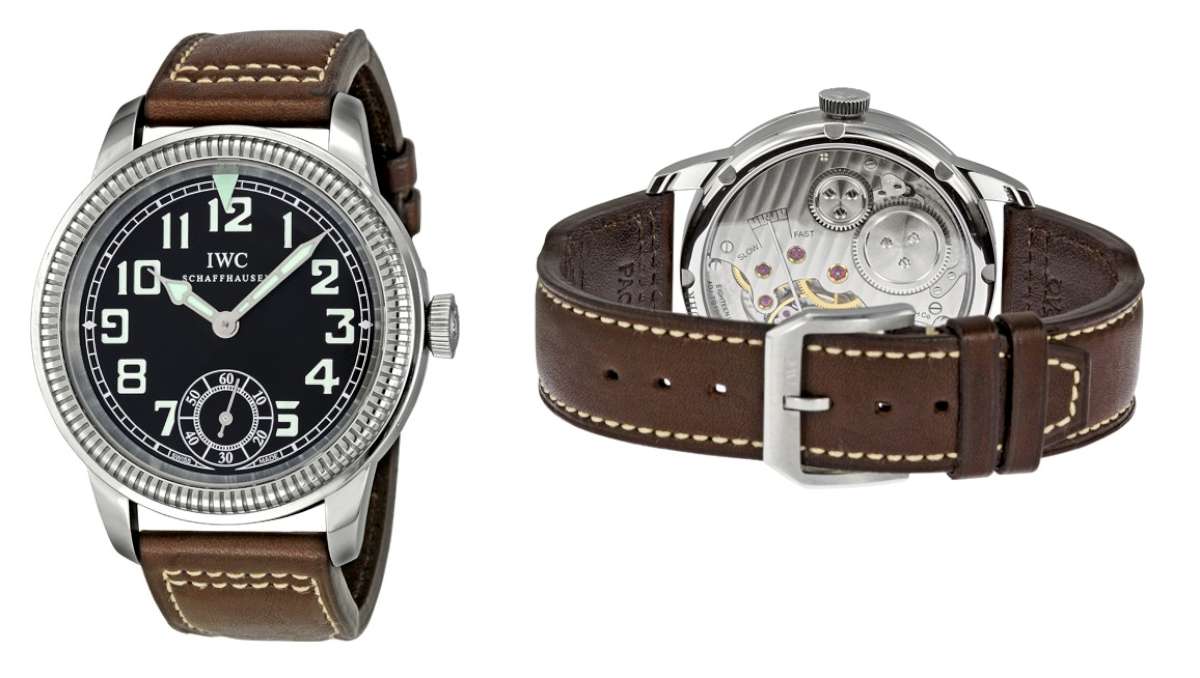 IWC justify the solid caseback by providing the movement with a soft iron inner case for protection against magnetic fields, which makes a sapphire caseback pointless because you wouldn’t be able to see anything of the movement. But I can’t help feeling that in the Big Pilot’s Heritage Watch 55, IWC’s decisions regarding the features of the historic original to be retained and those to be abandoned were not so much design choices or a desire to change something, but determined simply by the movement that they had available.