Split-seconds chronograph seconds hand, which starts off superimposed on the other chronograph hand, and can be stopped using the pusher at 10 o'clock to take an intermediate reading

The seconds chapter ring is interrupted by the numerals, so fractional seconds readings are possible only in certain positions

The "A" stands for Antoine (de Saint-Exupéry) 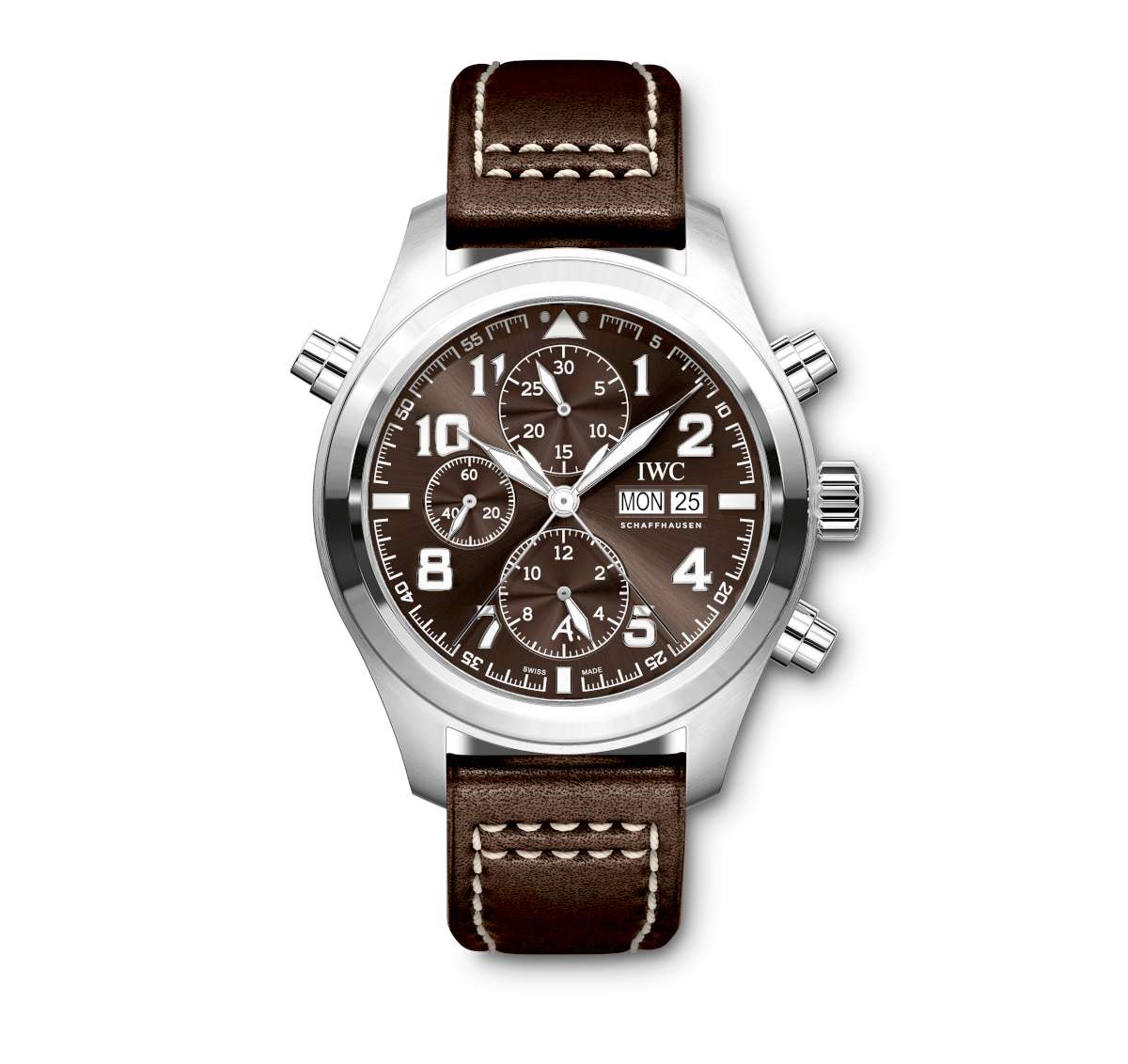 This pilot’s watch by IWC is distinctive for its tobacco brown dial and calfskin strap with cream-coloured contrasting stitching, one of the brand’s hallmarks for its watches made in cooperation with charity organization Fondation Antoine de Saint-Exupéry. It is a close relation to the Pilot’s Watch Double Chronograph Edition “Le Petit Prince,” reference IW371807, presented in 2015.

The dial is very busy, with three subdials, day and date windows, and seven hands. The watch has the split-seconds or rattrappante chronograph function, in which the two chronograph seconds hands start simultaneously, and one of them can be stopped using the pusher at 10 o’clock for an intermediate time reading. Meanwhile the other chronograph seconds hand continues to run. Pushing the split-seconds pusher at 10 o’clock again sends the split-seconds hand back to join the other. The process can be repeated as many times as you like. Follow this link for a selection of split-second chronograph watches. The top subdial shows chronograph minutes, the bottom chronograph hours (the “A” in this subdial stands for Antoine), while the subdial at 9 o’clock is for continuous seconds. While IWC have worked hard on making all the information provided as legible as possible, there is one thing that I don’t like: the seconds ring at the outer edge of the dial is subdivided into the customary fourths of seconds, but it is interrupted every five seconds by the numerals. It seems like a departure from functionality, because in some positions you can read off fractions of seconds, in others you can’t. 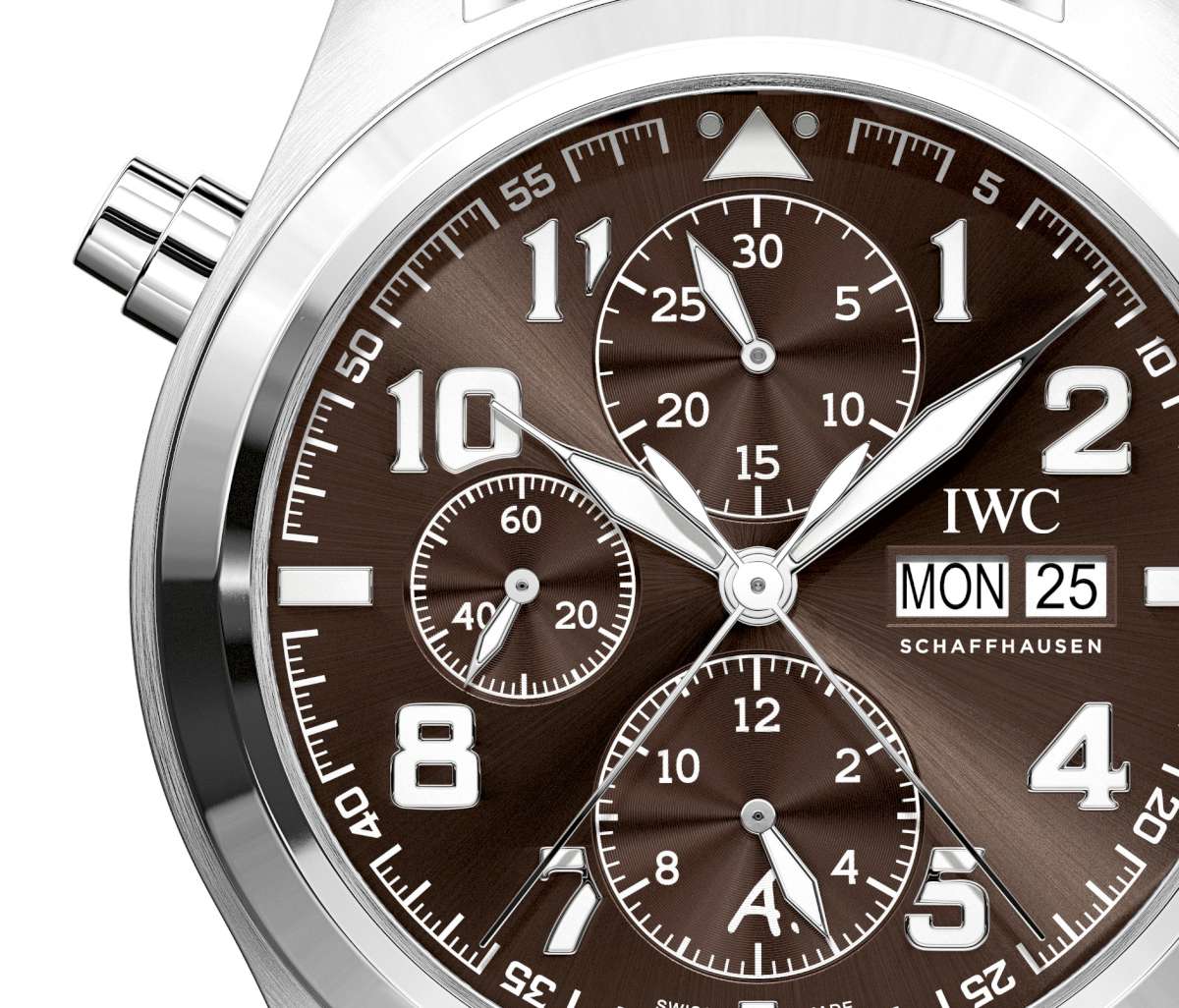 The watch is powered by the self-winding 79420-calibre chronograph movement. This is based on an ETA movement, the Valjoux 7750, but with extensive modification, adding the rattrappante mechanism. It runs at 28,800 vibrations per hour (4 Hertz) and has a power reserve of 44 hours.

The stainless steel case is 44 mm in diameter, 17 mm thick, hand-finished with differentiated polished and satin surfaces. Water resistance 6 bar, in theory 60 metres water, but the 6 bar refers to testing only using air pressure and not by immersion in water. It has a soft iron inner case for protection against magnetic fields. On the caseback, there is an engraving of the Lockheed P-38 Lightning, the aircraft in which the writer took off on 31 July 1944 to make what turned out to be his last reconnaissance flight, over the south of France. The watch has a brown Santoni calfskin strap with orange lining and stainless steel folding clasp. 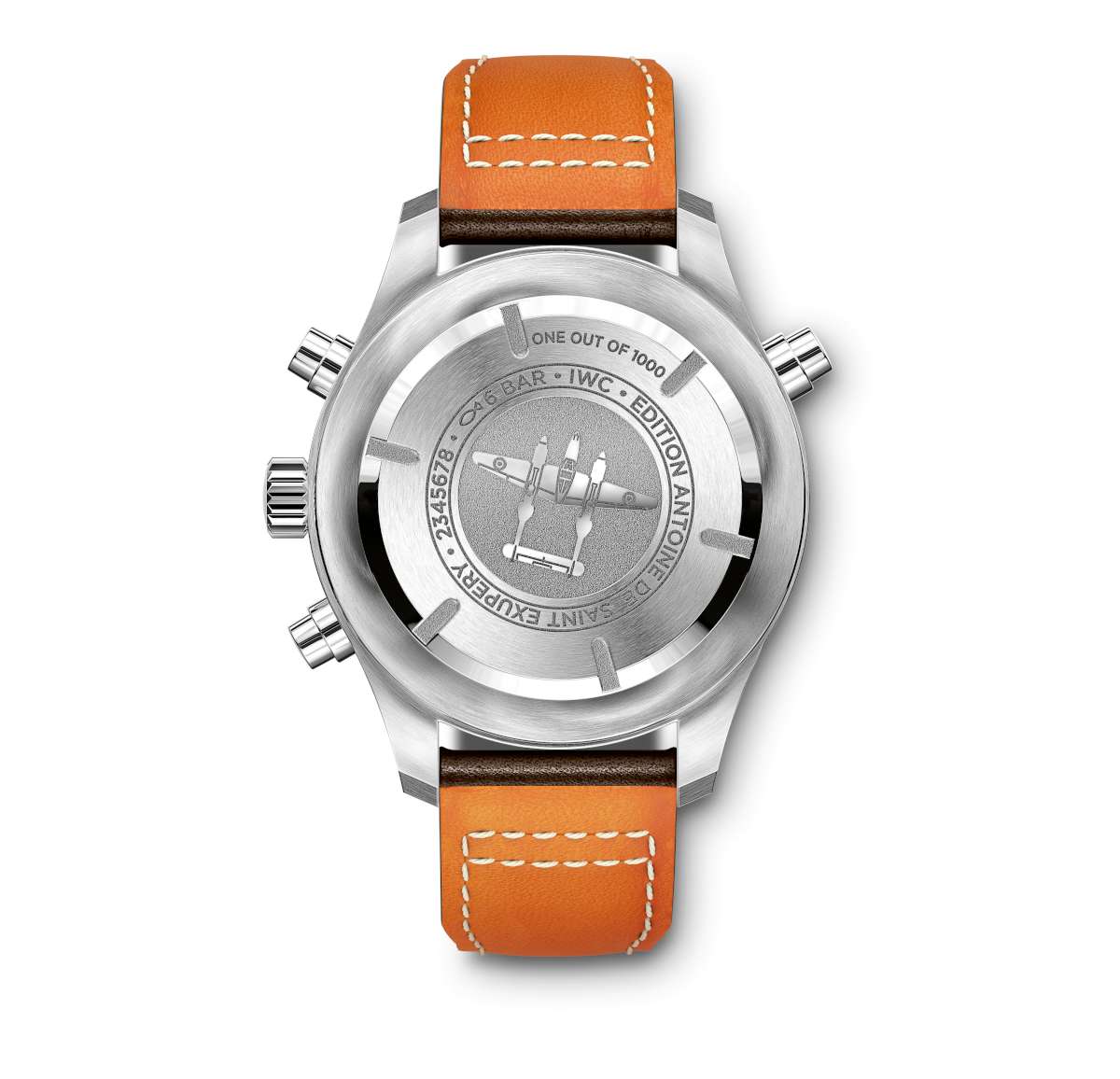