Chronograph crown wheel and mechanism visible from dial side 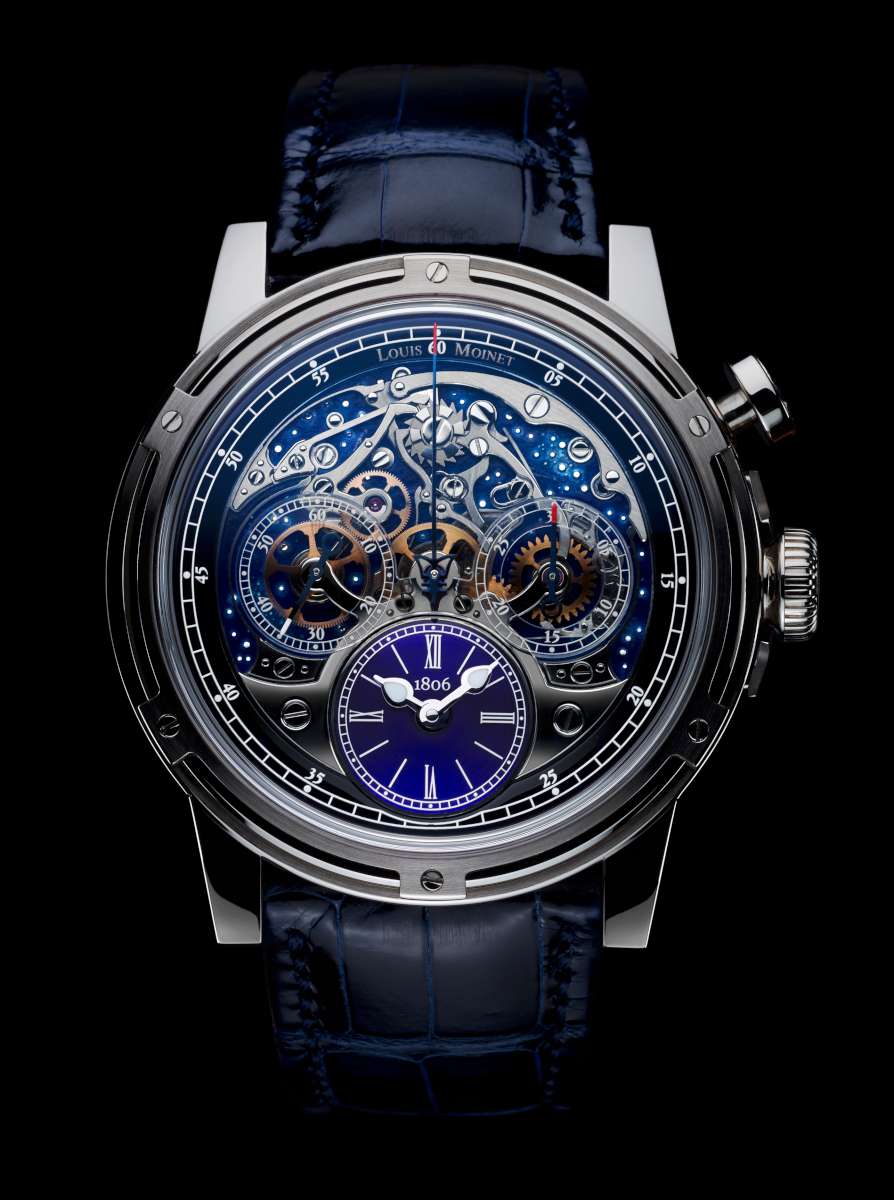 For the brand Louis Moinet, this is an important year. Watchmaker Louis Moinet started work on his “compteur de tierces” in 1815 and completed it in 1816, 200 years ago. Jean-Marie Schaller founded the modern brand in 2004, and in 2013 he was able to purchase the original Compteur de tierces in an auction at Christies, for 50,000 Swiss francs.

The historical watch was incredibly advanced for its time. Its balance runs at 216,000 vibrations per hour, 30 Hertz, over seven times faster than most contemporary watches that run at 4 Hertz. This enabled it to measure time to a precision of a sixtieth of a second (the “tierce” of its name), with a central second hand making one revolution of the dial every second. It has subdials for elapsed seconds, minutes and hours, and two buttons for start, stop and reset. Not only was it the first chronograph, but also a timepiece that looked forwards to modern chronographs in many ways. The video above shows it in operation.

Louis Moinet made his chronograph for astronomical observations of successive transits of a star. For this reason, the movement had to keep running for at least 24 hours at that incredible speed. The movement ran on oiled rubies to reduce friction, and the balance spring with seven coils gave it a power reserve of over 30 hours. In the photo above, the subdial at top right is for 60 seconds, that at top left for 60 minutes, and the one at bottom centre is for 24 hours. The pusher at 12 o’clock is for starting and stopping the chronograph, that at 11 o’clock is the reset button. 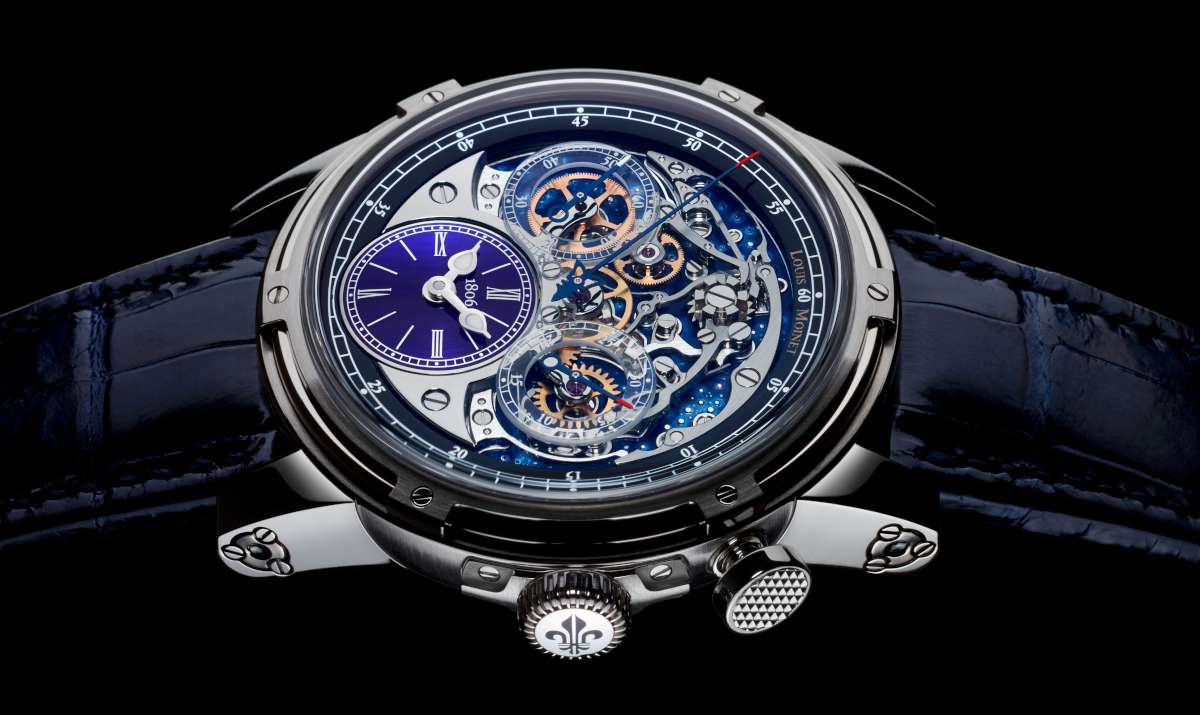 To celebrate the bicentenary, Louis Moinet has presented a new limited edition of the Memoris chronograph introduced last year. The major feature of the piece remains the fact that all parts of the chronograph mechanism are in view on the dial side, above the mainplate, while the rest of the movement is below. The self-winding LM54 calibre was developed with movement manufacturer Concepto, and it runs at 28,800 vph (4 Hertz), with 48 hours power reserve. The anniversary piece has a new blue enamel dial for the time indications, and a new mainplate painted in blue and decorated with star constellations. The flange covering the top part of the dial is in a composite transparent material with a translucent blue colour that adds extra colour. 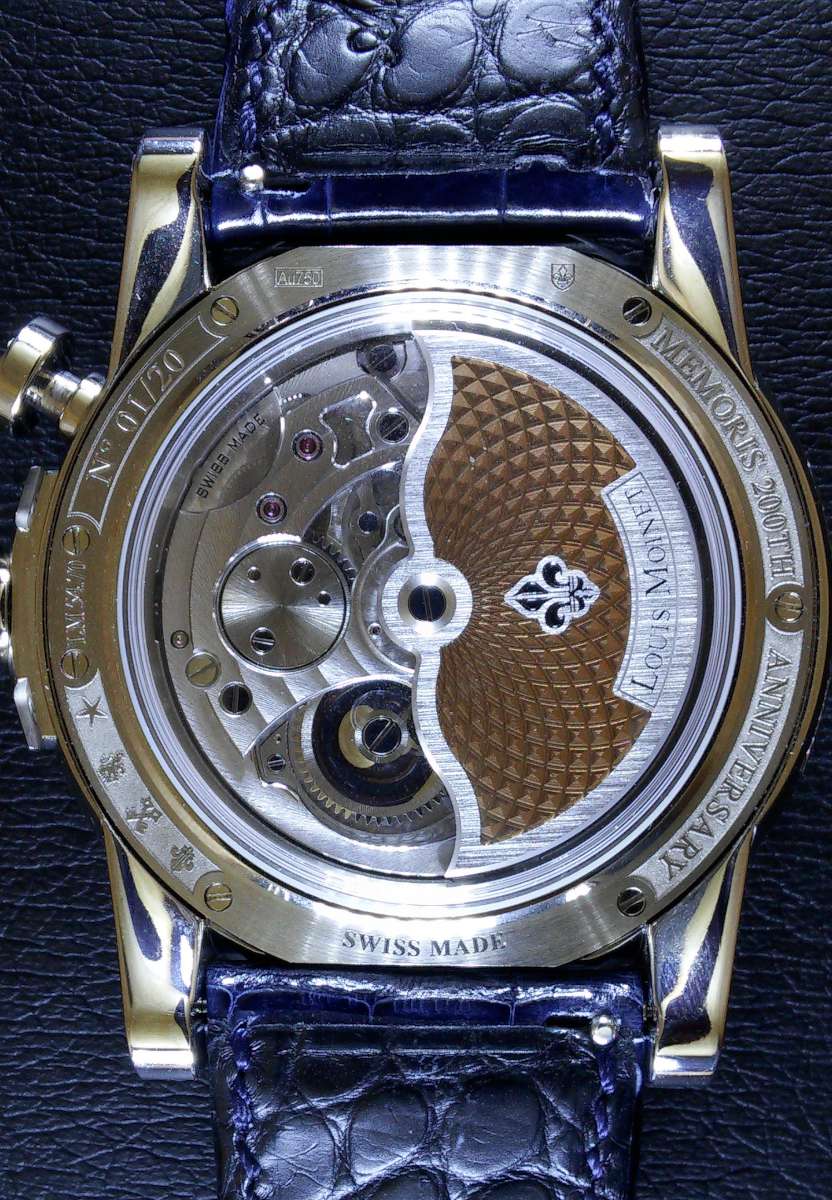 The watch has a 46mm case, 15.75mm thick, mounted on an alligator strap with an attractive gold folding clasp with fleur-de-lys motif.