Pusher to send back time zone

Pusher to chime the alarm time

Pusher to adjust day of week

Pusher in crown to operate minute repeater on demand

Pusher to chime the date on two gongs, first tens of days, then the remaining days 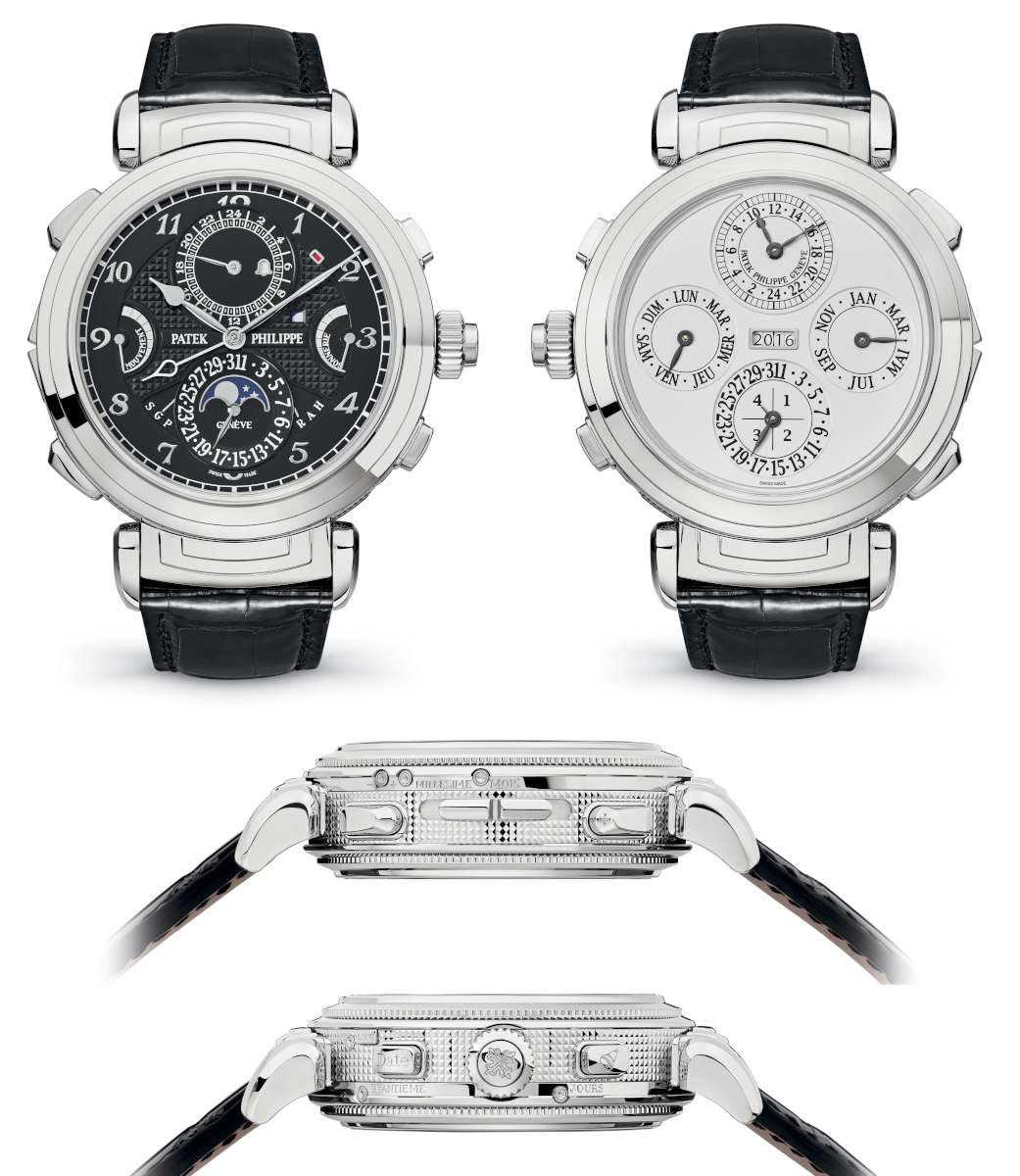 This is the production version of the Grandmaster Chime 5175 that Patek Philippe presented for its 175th anniversary in 2014. That piece was a limited edition of seven pieces, six sold to collectors, and one that will one day be on show at the Patek Philippe Museum. The version presented this year is not a limited edition, but in practice it will be limited by the fact that it is so complicated to produce. Perhaps a couple of watches will be made every year. The Grandmaster Chime 5175 cost about €2 million each; this piece, reference 6300, will presumably cost a bit less, but it’s still a pricey object.

The Grandmaster Chime Ref. 6300 is now the most complicated watch in the regular Patek Philippe collection, and it is the first of the brand’s production watches to have a Grande Sonnerie. It has a much cleaner case than the ornate Baroque anniversary piece, with Clou de Paris decoration on the caseband and on the black dial. The case is large at 47 mm in diameter, 16.1 mm thick, but it’s definitely wearable, “created to be used on a daily basis” as Patek says in their press release. The case rotates through 360 degrees on its lugs, so that both faces can be used. The rotation mechanism is patented: the case alone has more components than most watch movements, 214 parts. 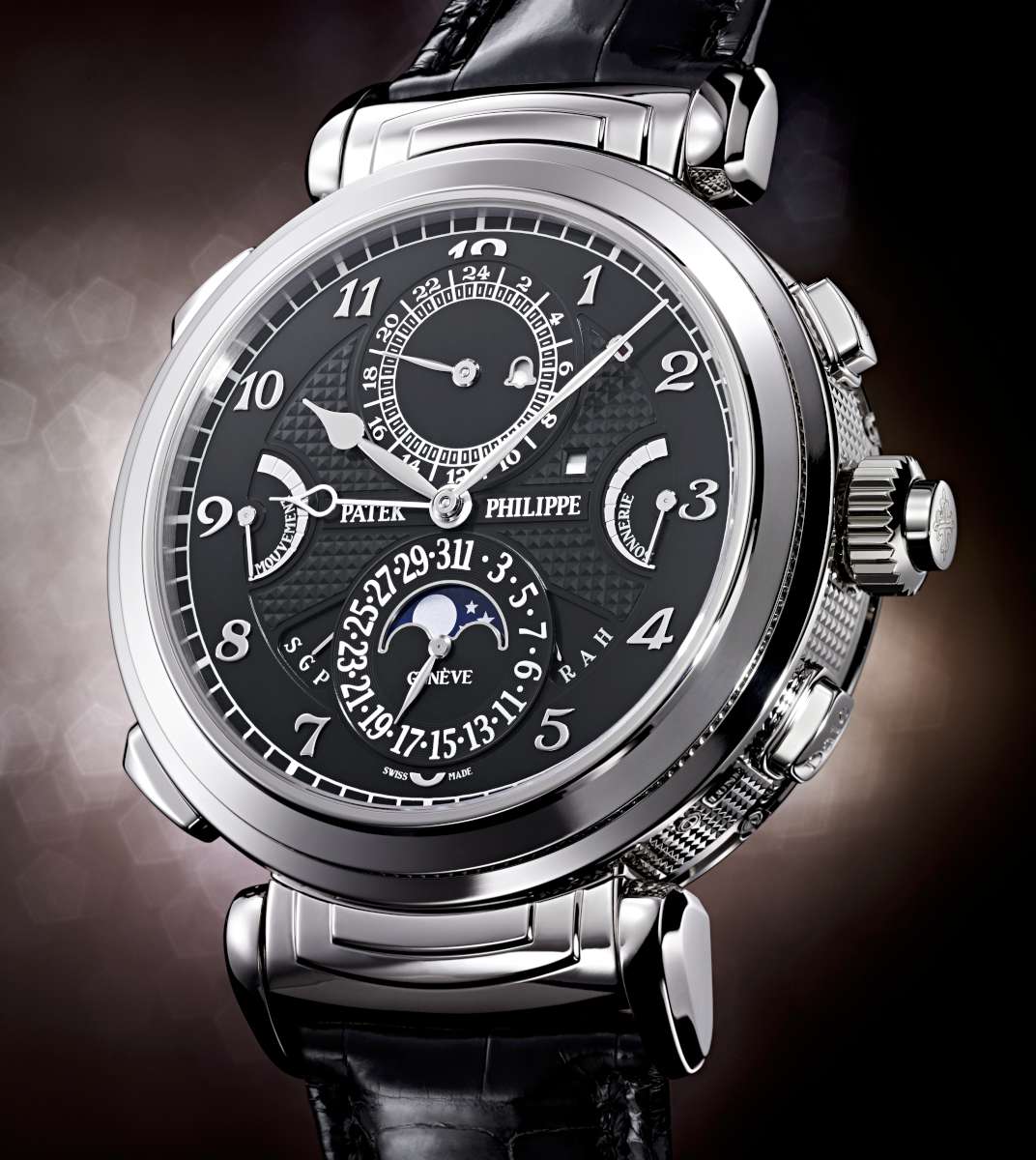 One face is dedicated principally to time functions, with black hour and minute hands, and another central gold hand, for the second time zone. At 12 o’clock, there is a 24-hour subdial used for the alarm function. The alarm time that has been set can also be “played,” using the gongs that are part of the repeater function. The date can be played. These two functions are world firsts, two of the six patents filed for the movement. A bell-shaped window on the 24-hour subdial indicates whether the striking mechanisms are active (white) or deactivated (red). The striking function is shown in a window at 7.30, with S for silence, G for Grande Sonnerie, P for Petite Sonnerie. A small circular window at 1.30 shows red if the strikework has been deactivated. The Grande Sonnerie sounds the hour on the hour, and then every quarter-hour, it sounds the hours and then the quarters. The Petite Sonnerie sounds the hour on the hour, and then just the quarters every quarter. The minute repeater, triggered using the pusher in the crown, strikes the time at any moment, hours, quarters, and minutes. When the alarm is set, all other strikework functions are disabled, and only recommence after the alarm has sounded.

The crown is used to wind the watch and set alarm and time, and there is a crown function indicator at 4.30, with three indications, R (winding or remontage), A (alarm) and H (time setting). There are two power reserve indicators, at 9 o’clock for the movement, and at 3 o’clock for the strikework. A subdial at 6 o’clock shows the date and moon phase. 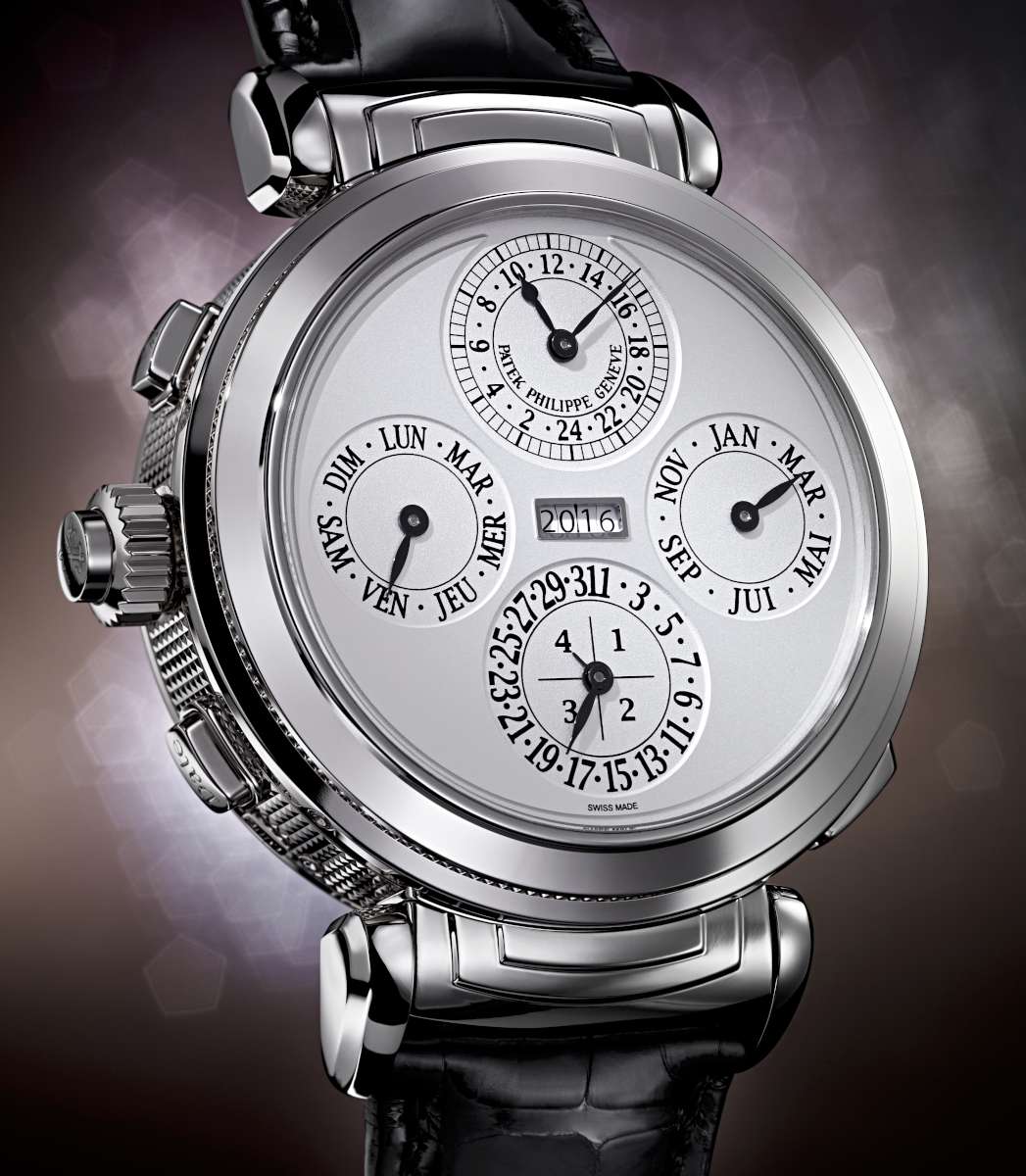 The other side of the watch is dedicated to the perpetual calendar, with day of the week, month and date on the three lower subdials, the year shown digitally at the centre, and the leap year shown on the bottom subdial (4 indicates a leap year). The top subdial shows the time, on a 24-hour dial. And so whichever face you are using, you can see time and date.

Patek Philippe like to make watches that are very simple to use, and this piece, even with its many different functions, has been designed for intuitive use. The buttons are all labelled with engraved lettering and symbols. You don’t have to consult the instruction book, and the watch is largely protected from incorrect use of the pushers by means of isolation systems that protect the delicate mechanisms.

The calibre GS AL 36-750 QIS FUS IRM has 1,366 components, it is hand-wound, with separate mainspring barrels for time functions (72 hours power reserve) and the striking functions (30 hours power reserve). The movement runs at 25,200 vibrations per hour, 3.5 Hertz. I wonder why they chose this unusual frequency? 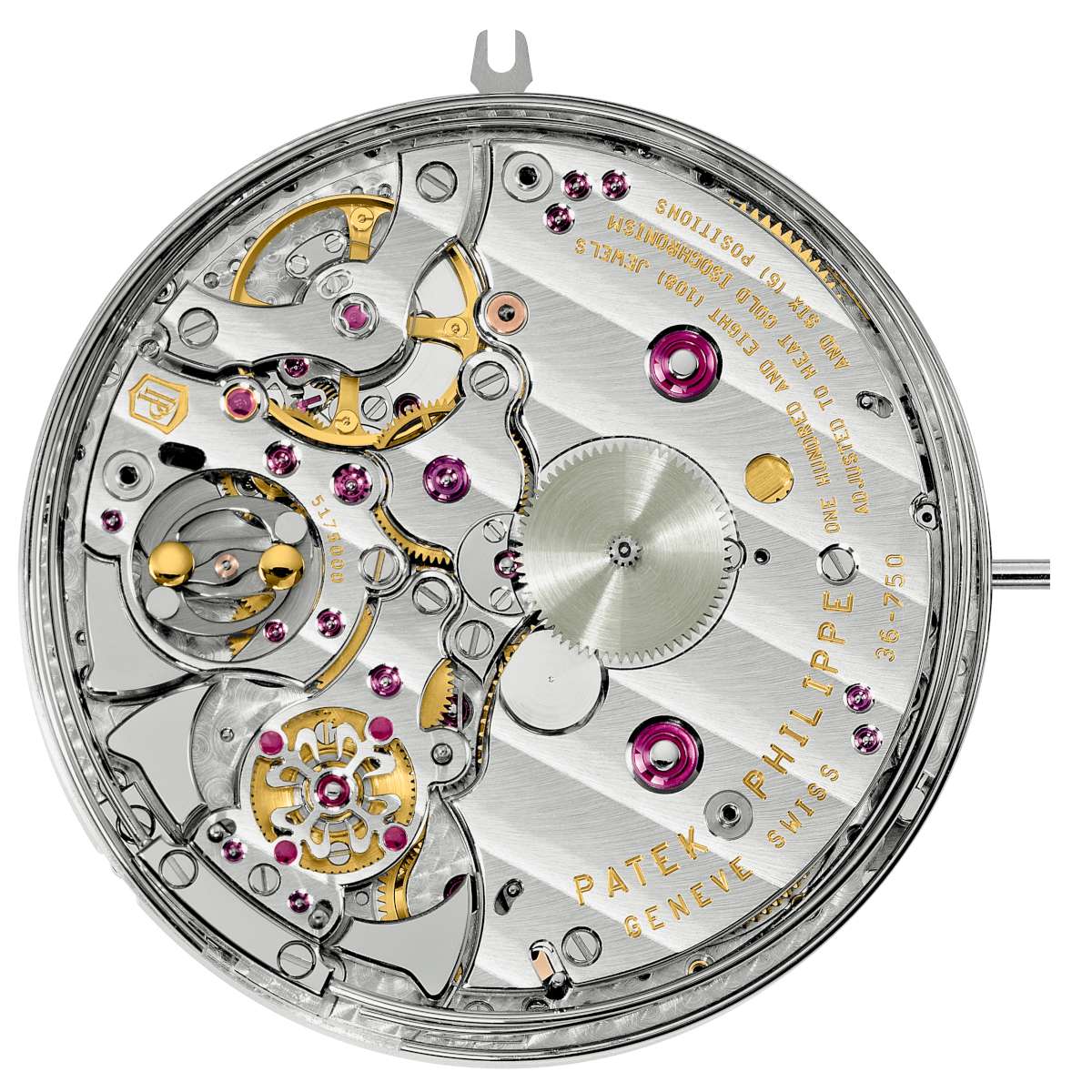 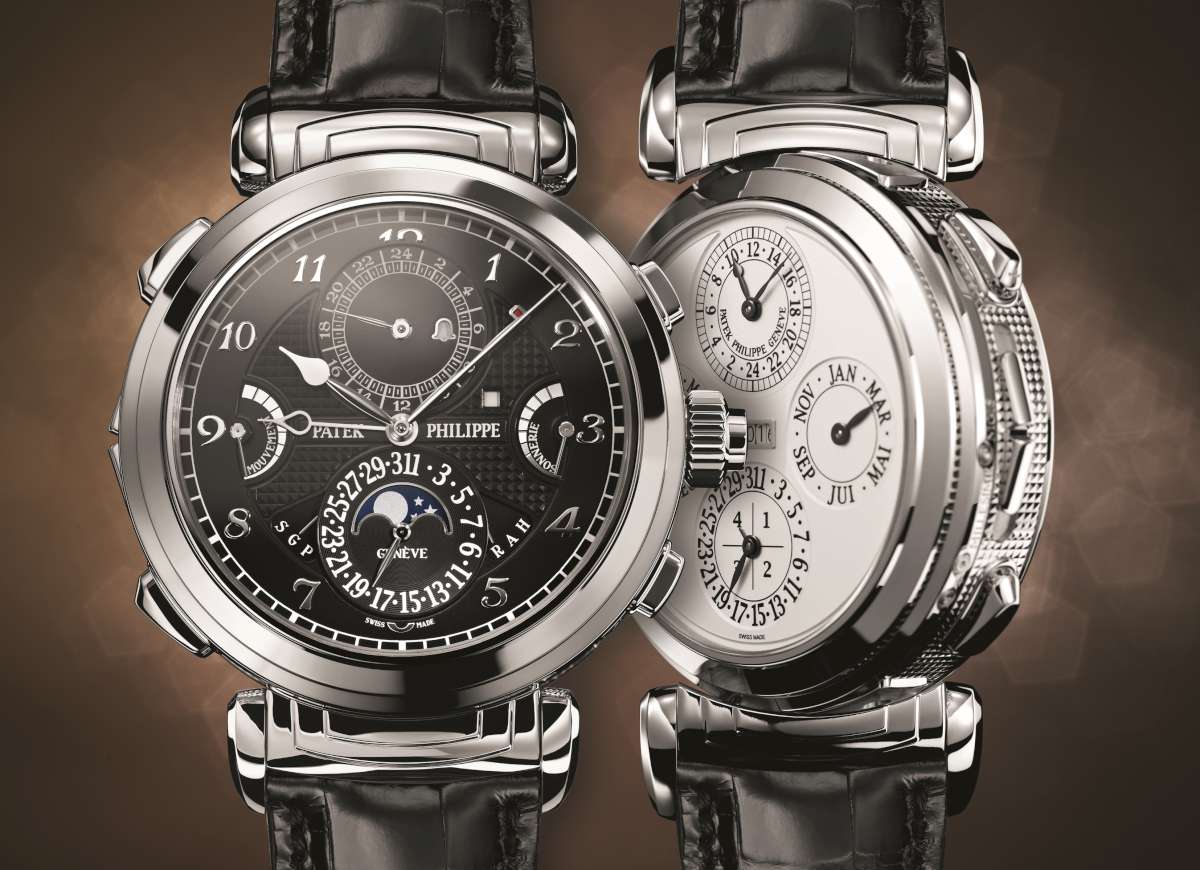