Hands and hour indications coated with Chromalight for visibility in darkness

Stainless steel Oyster bracelet with folding clasp and the Rolex-patented Easylink system, which permits the bracelet length to be extended by 5 mm 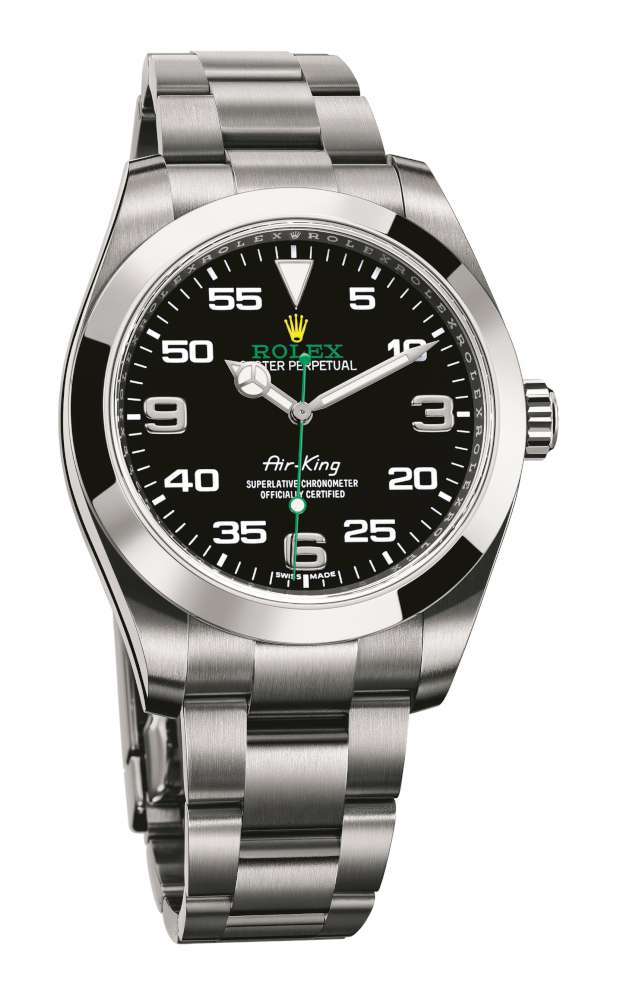 A new pilot’s watch from Rolex! The Rolex Air-King has some of the characteristics of classic pilot’s watches, such as the black dial, the generous SuperLuminova on hands and numerals, high resistance to magnetic fields, and the white triangle at 12 o’clock. But, as it’s a Rolex, it also differs significantly from the usual pilot’s watch genre. The hour hand has the multifaceted design reminiscent of early pilot’s watches, while the minute hand is a simple baton. This is a nice feature, making the hands immediately recognizable. The numerals are a quirky combination of hours at 3, 6 and 9, and minutes in the other positions. The crown is of regular size and has nothing of the early pilot’s watch chunkiness. The Oyster case is waterproof to 10 bar, 100 metres. 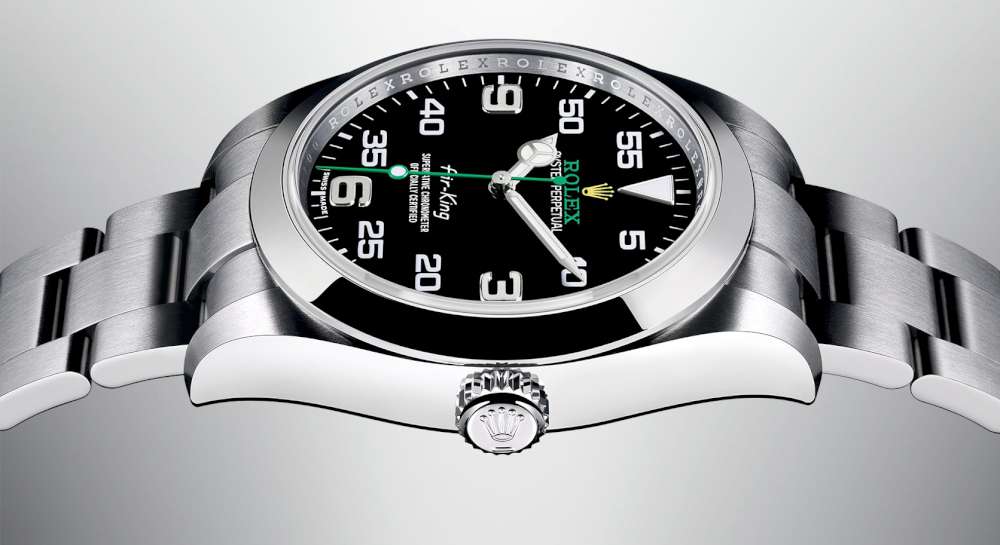 The design of this timepiece reflects the model’s long history. According to the legend, RAF pilots preferred Rolex Oyster Perpetual watches, purchasing them independently and using them instead of the standard-issue watches whose precision and reliability was presumably lower. Hans Wilsdorf heard about this and, after the Battle of Britain, he decided to pay tribute to the pilots with a series of manually-wound Oyster watches made specifically for aviation. They were larger than their other products, and had names such as Air-King, Air-Lion, Air-Tiger and Air-Giant – the latter reflects the fact that at that time, 32 mm was considered a large watch. All of them except the Air King were discontinued in 1945. The Air-King was a 34 mm watch (31mm and 36mm versions were also made, and a 26mm version for women), without date indication. It was produced right up until 2014, and it was one of the models with the longest period of continuous manufacture. 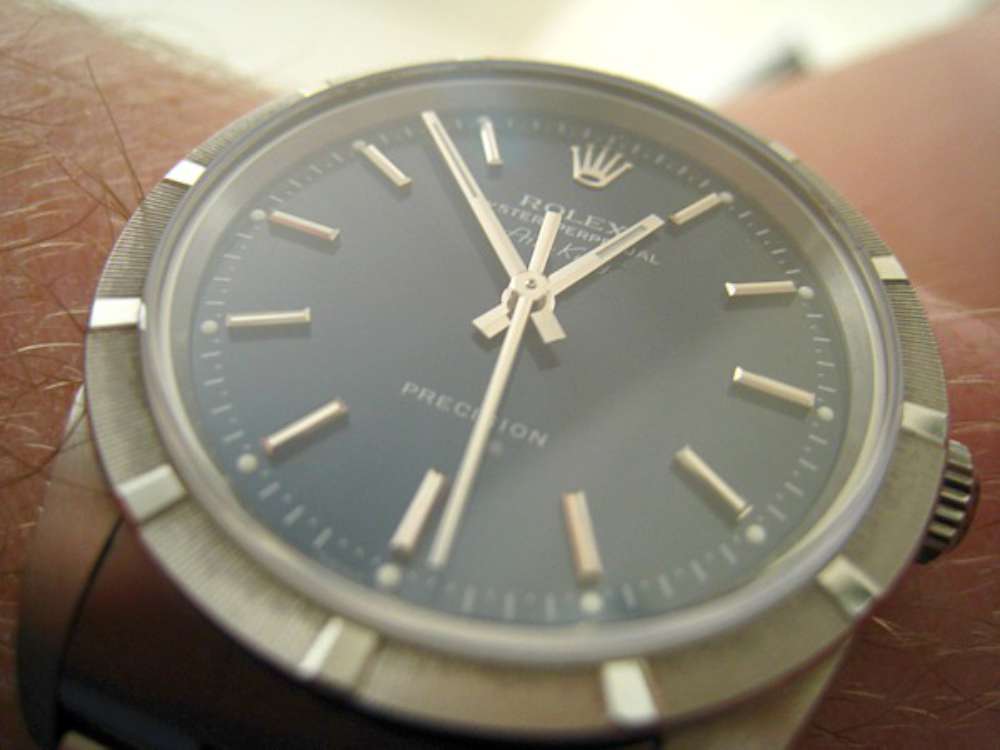 The Air-King was one of the lowest-priced, entry-level Rolex watches. The vintage models didn’t look at all like pilot’s watches, and the Air-King-Date even had a date window with the Rolex Cyclops lens. So the new piece marks a shift towards the classic pilot’s genre. 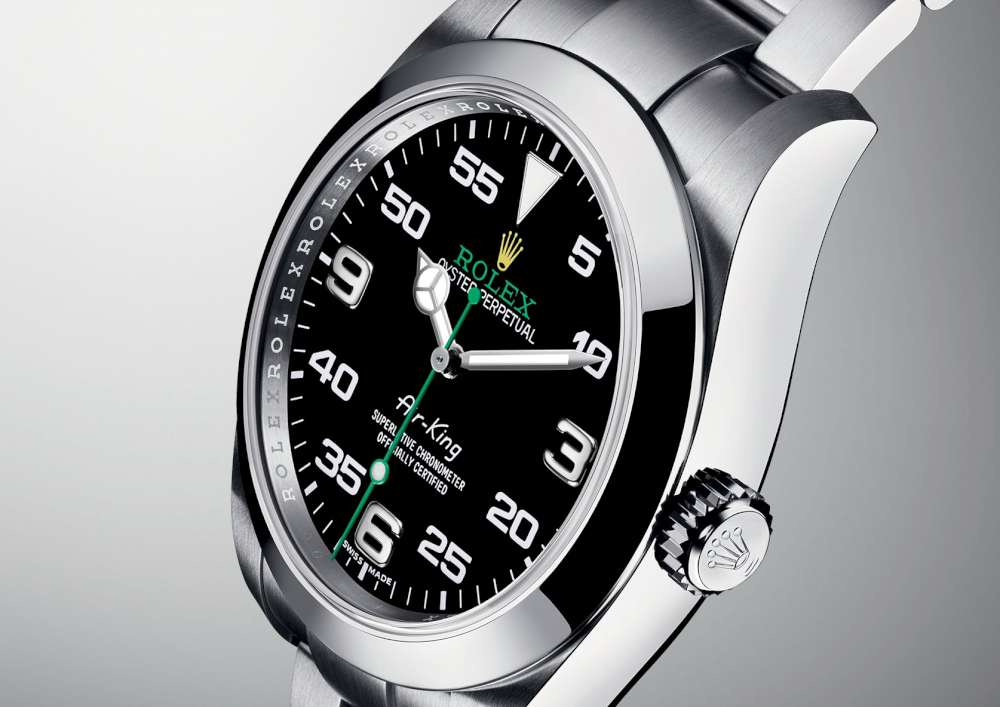 The new Air-King has a dial 40 mm in diameter, and it features the Rolex logo in green and yellow, the first time that it appears in this form on a watch. The seconds hand is also green. The Air-King logo is in the same lettering used for the like-named model in the 1950s. The marking “Superlative Chronometer” refers to the precision testing. The screw-down crown provides the stop-seconds function for precision time-setting. Hour markers are in white gold, with Rolex’s proprietary Chromalight luminescent coating. The case is in 904L stainless steel, with screw-down caseback. Inside, the movement is protected against magnetic fields by an inner case.

The Calibre 3131 is a self-winding mechanical movement designed and manufactured by Rolex. It has a blue Parachrom hairspring that is unaffected by magnetic fields. The escapement is also paramagnetic, with escape wheel in a nickel-phosphorous alloy made using an electro-forming technique. The movement is chronometer-certified by COSC, the official Swiss testing institute, which guarantees a precision of -4/+6 seconds/day. COSC performs its tests on the movement alone. Rolex then assembles the watches and tests them again to higher precision tolerance, reaching -2/+2 seconds per day. Power reserve is about 48 hours. Even though invisible from outside the case, the movement is finely finished. 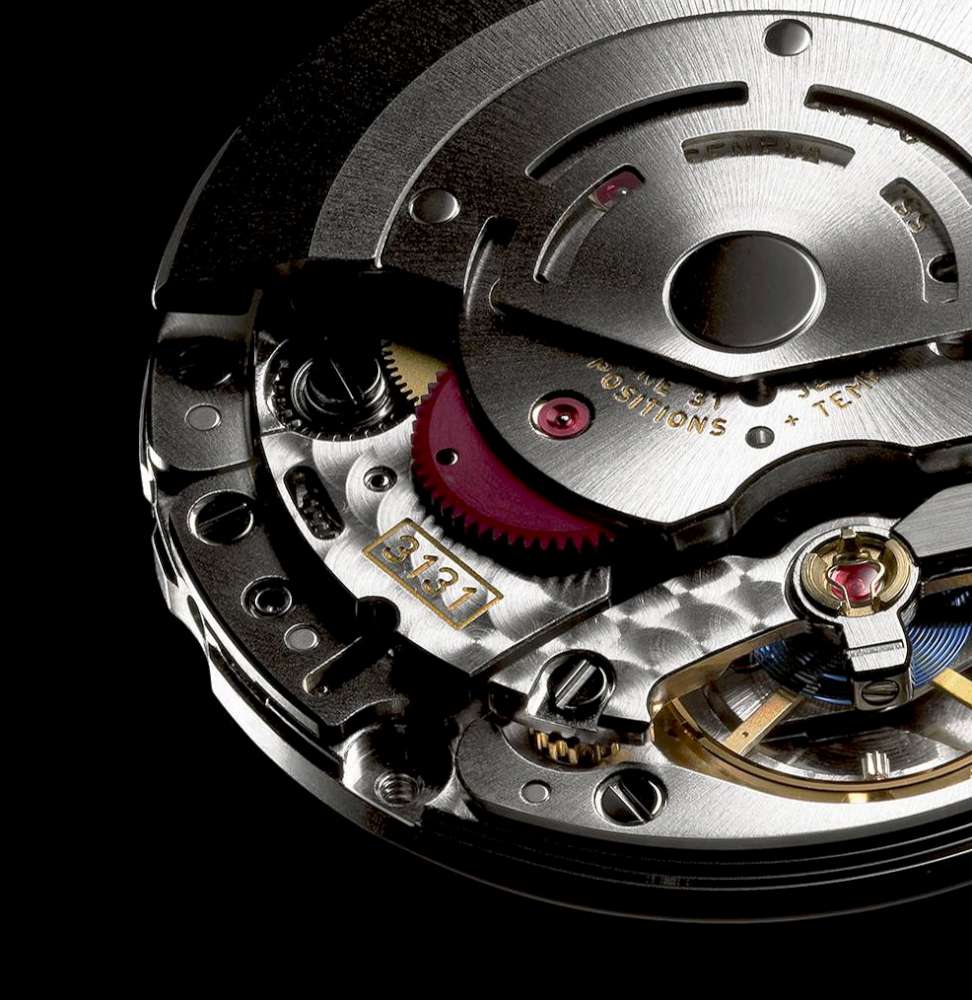 The Air-King has a stainless steel Oyster bracelet with folding clasp and the Rolex-patented Easylink system. This enables the wearer to increase bracelet length by about 5 mm.