The three watches in the Arceau Pocket La Promenade de Platon by Hermès are all one-off pieces, made using three techniques: enamel, engraving, and three-dimensional engraving with added layers of gold. They are based on a scarf design by Annie Faivre on this year’s theme “Nature at full gallop.” The subject is philosopher Plato riding through the gardens of Academus, the location where he gave his lectures. It is likely that more pieces with the same sort of emphasis on metiers d’art will be presented later this year (2016), to be featured in an upcoming jewellery exhibition in Paris, then Shanghai and New York.

The watches all feature a horse and rider with luxuriant foliage. They have the asymmetric 48 mm white gold Arceau case, with its arched bar at the top inspired by a stirrup. This is in turn linked to a cord and pouch in alligator leather. It is one of the more unusual watch configurations by Hermès, with alligator strap instead of a chain, a slightly ironic touch considering the price, 237,000 euro. 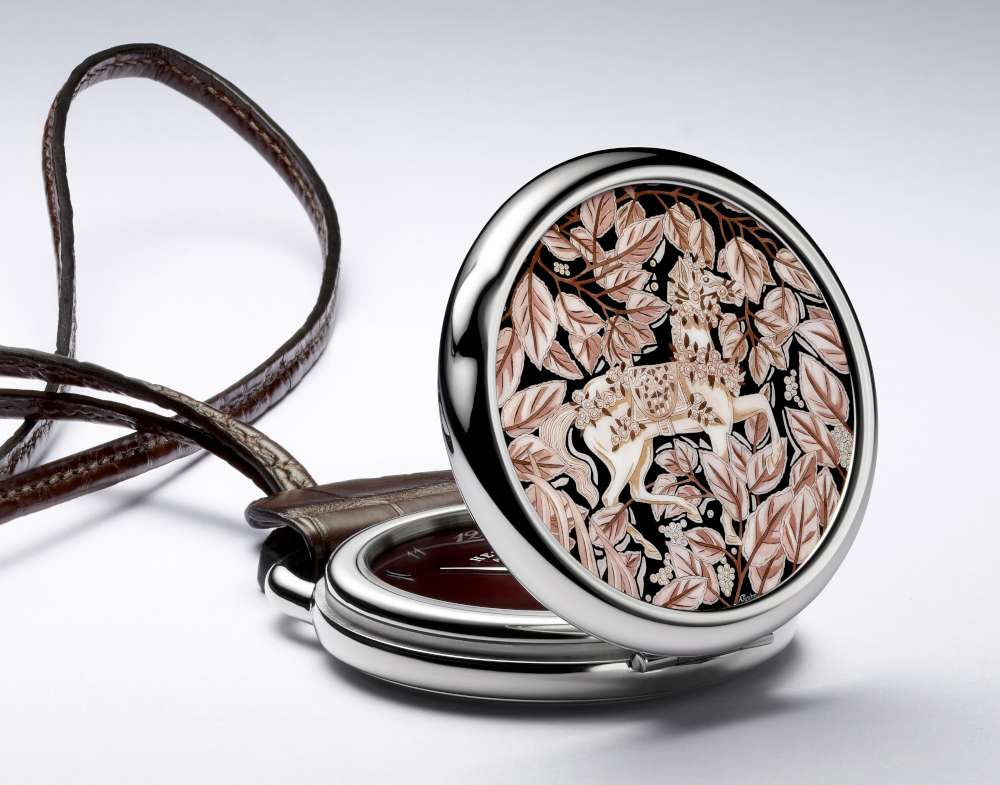 In the first piece (above), the scene is crafted in grand feu enamel, painted in at least 20 stages, each followed by a firing. The dial is in shades of brown enamel on a white gold base, with champlevé white gold Arabic numerals. Strap and pouch are in brown alligator. 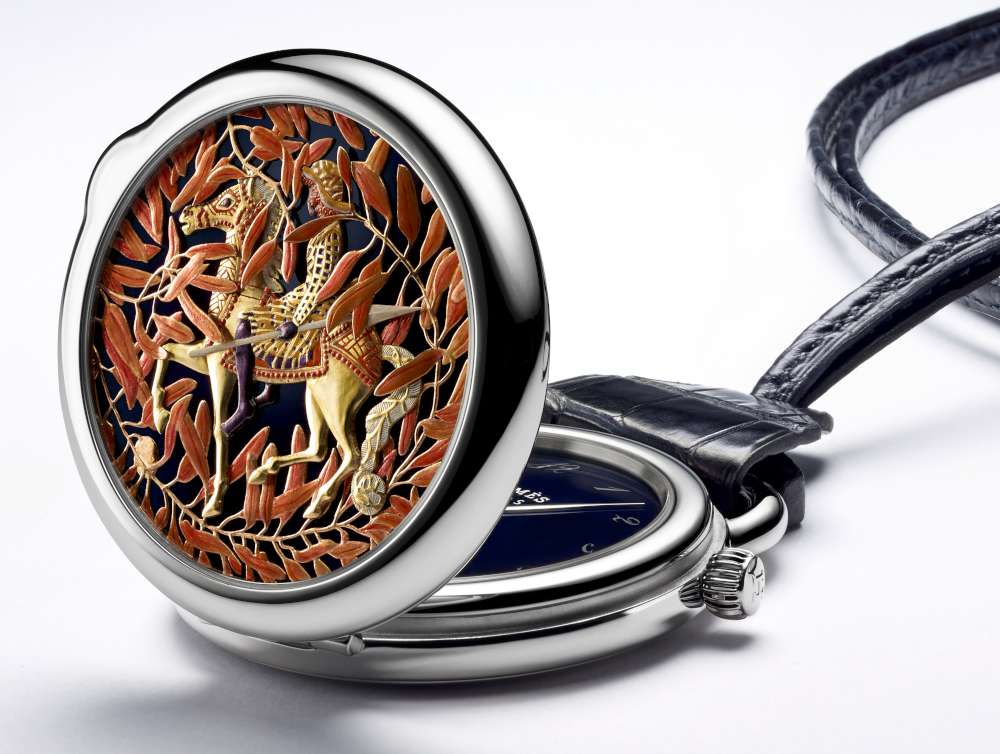 In the second watch shown in the photo above, the white gold base of the cover is coated with night blue grand feu enamel, which provides the backdrop for decoration carved from thin yellow gold plate. Once the arrangement is completed, the artisan accentuates certain details with tiny touches of paint. The dial is in graded shades of night blue enamel on a white gold case, with champlevé white gold Arabic numerals, and strap and pouch in matt indigo blue alligator. 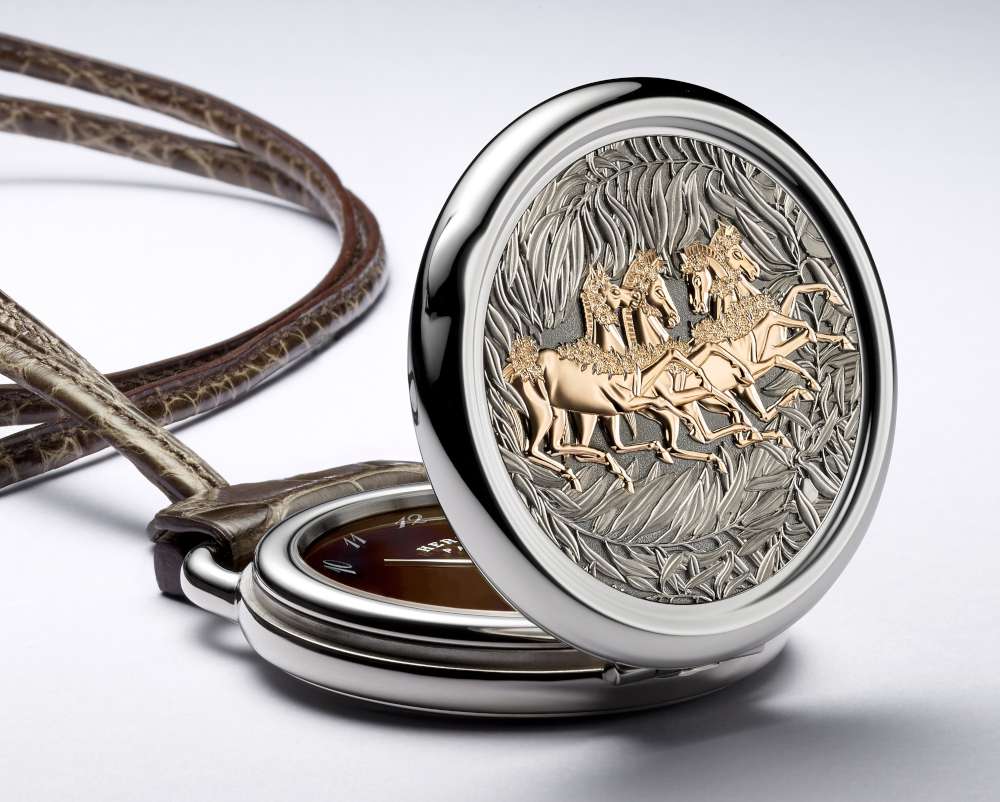 The third scene features four horses engraved in rose gold against a white gold background. The dial is in graded shades of falcon-toned enamel on a white gold base, with champlevé white gold Arabic numerals. The cord and pouch are in elephant grey alligator.

The transparent case-back reveals the self-winding Hermès H1837 movement made by Vaucher, with twin mainspring barrels and a 50-hour power reserve. It runs at 28,000 vibrations per hour, 4 Hertz. The mainplate is decorated with snailed circular-graining, while the balance bridge and oscillating weight feature the ‘sprinkling of Hs’ motif that is unique to Hermès watches. The case has a 3 bar (30 metre) water resistance rating. 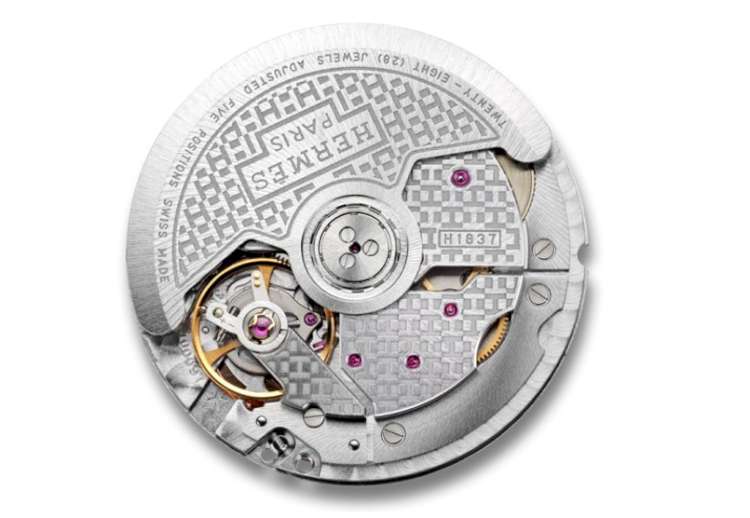