Robert Dallet (1923-painted big cats and made many scarf designs for Hermès in the 19980s. In January this year, Hermès was involved in the foundation of the Robert Dallet Initiative for Wild Cat Conservation, which operates with Panthera to help protect these endangered species. Dallet first saw a tiger in a Paris zoo, and this gave him his mission in his career as an illustrator. He travelled to Africa whenever possible, watched and photographed the animals, and then created exquisitely detailed paintings back in his studio. He was fired by the need for conservation: he once said “I hope that, tomorrow, these drawings are not the souvenir of a fabulous world.” Three tiger subspecies became extinct even in his lifetime. 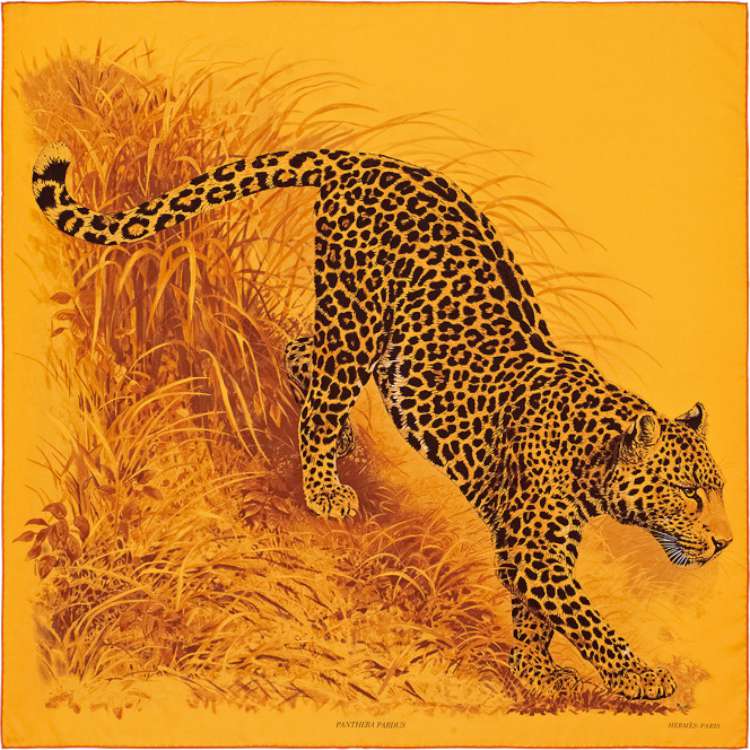 Hermès have produced a touring exhibition on Robert Dallet’s work, titled Fierce and Fragile. It has been at Greenwich Museum, Connecticut and Milan; it is currently running in Munich (11-23 June 2016), and will later visit Hong Kong (8-27 September), Taipei (22 October-6 November) and Mumbai (10 December 2016-9 January 2017. It is accompanied by a book with the same title available on line.

The Arceau Tigre watch celebrates Dallet, and it is also part of the “Nature in full gallop” theme that has been chosen for 2016 at Hermès. It is a metiers d’art piece, made using an unusual technique, email ombrant (shaded enamel). This is normally applied to porcelain, using the material’s translucency: the artist works on the mould so that the finished product has different wall thicknesses and so appears darker where the porcelain is thicker. In this piece, the technique is modified, and the engraver works directly on a disc of white gold, intricately carving out the fine lines that will become the animal fur. Then the finished engraving is coated in a dark but translucent enamel, so that where the engraved lines are deepest, the shade is darkest.

The watch is in the Hermès Arceau case, with its stirrup-like upper attachment for the strap. It has a transparent caseback revealing the self-winding H1837 movement made by Vaucher, providing 50 hours of power reserve. The case is in white gold, 41 mm in diameter, with 3 bar (30 metres) water resistance. The strap is in Havana alligator with white gold pin buckle.

Price of the Hermès Arceau Tigre

The watch is a limited edition of 12 numbered pieces. Each costs 90,000 Swiss francs, €83,000. Hermès is helping to fund the wild cat foundation Panthera by means of the Robert Dallet Initiative for Wild Cat Conservation.