Chronograph subdial for 60 minutes and 12 hours; it can also be used for a second time zone when left running

Hour indices with white SuperLuminova, glows green in the dark 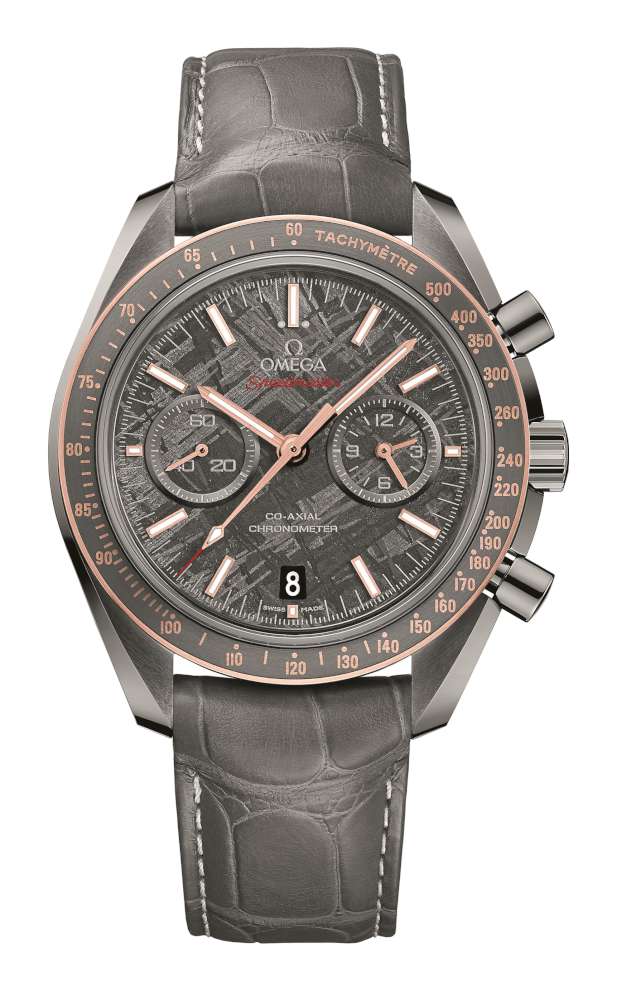 This variation on the Grey Side of the Moon Speedmaster chronograph by Omega is different for the meteorite dial, made using slices of the Gibeon meteorite from Namibia that fell from the sky many thousands of years ago. Before it reached the earth, it must have been very large: fragments of the meteorite can be found over an elliptical area 275 km in length and 100 km wide. It probably broke up during its fiery passage through the atmosphere because no crater has been identified. Bits of it were used by the local Nama people to make tools and weapons; they were identified as meteoritic in 1836. It has also been used for jewellery, and now for watches, for its fascinating pattern revealed when the surface is acid-etched, the so-called Widmanstätten pattern.

A chronograph incorporating meteorite stone prompts reflection on things like time and cosmology, because meteorites are left-overs from the formation of the solar system, and so are older than anything on earth at about 4 billion years of age. Below, the Widmanstätten pattern, in a photo by kevinzim / Kevin Walsh – widman

The watch has a ceramic case (44.25 mm diameter, 16.14 mm thick) hardened using plasma treatment. The bezel is in Sedna gold with a silicon nitride ceramic ring on top, which in turn is printed with the tachymeter scale in Omega Ceragold. It forms a nice frame for the meteorite dial. The chronograph arrangement is one of the most practical and legible of all, with central chronograph seconds, and a subdial at three o’clock for chronograph minutes and hours. As it’s a column-wheel chronograph, you can simply leave it running without harming the movement, and so it can double as a dual time-zone watch. The quarter-seconds scale at the edge of the dial is complete all the way around, undisturbed by the hour indices. Hour, minute, chronograph seconds hands, hour indices and the two dots at 12 o’clock are coated with white SuperLuminova that emits green light in the dark. The case is water-resistant to 5 bar, 50 metres. 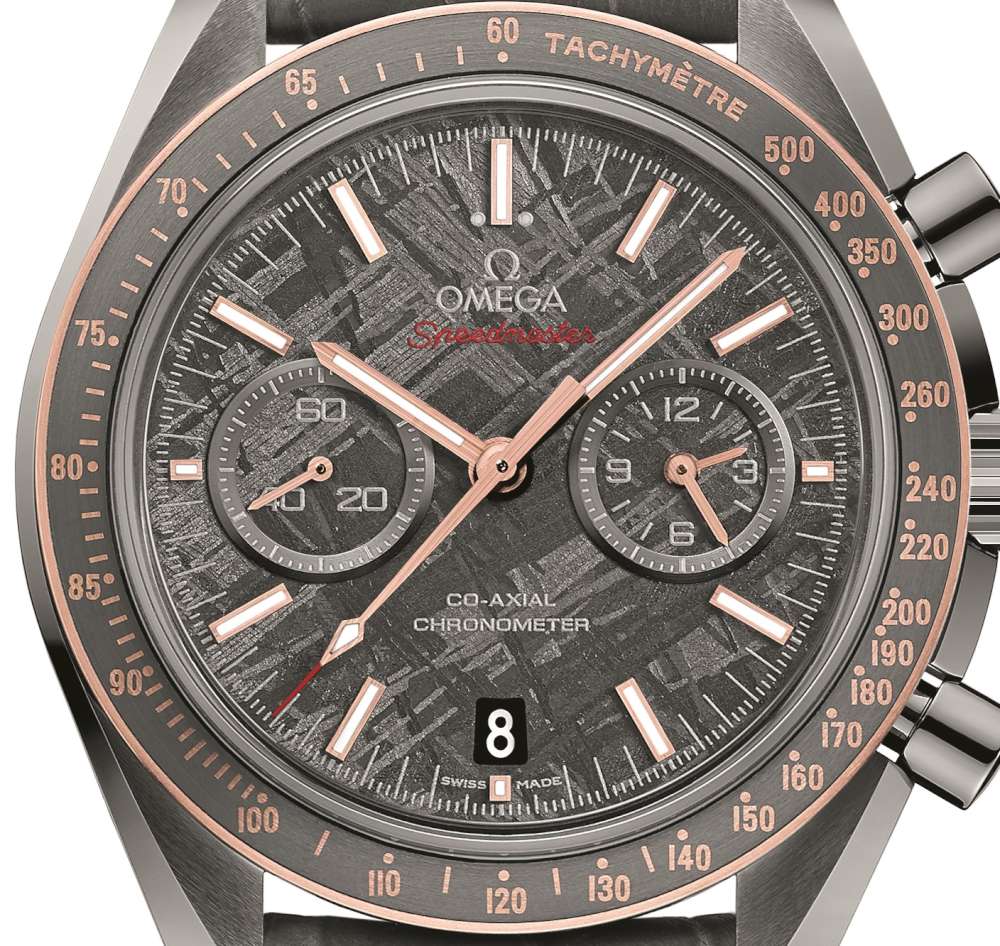 The Omega co-axial calibre 9300 movement is self-winding, with 54 jewels and a power reserve of 60 hours delivered by two mainspring barrels in series. The movement can be seen through the caseback, with the column wheel in view and conveniently labelled. 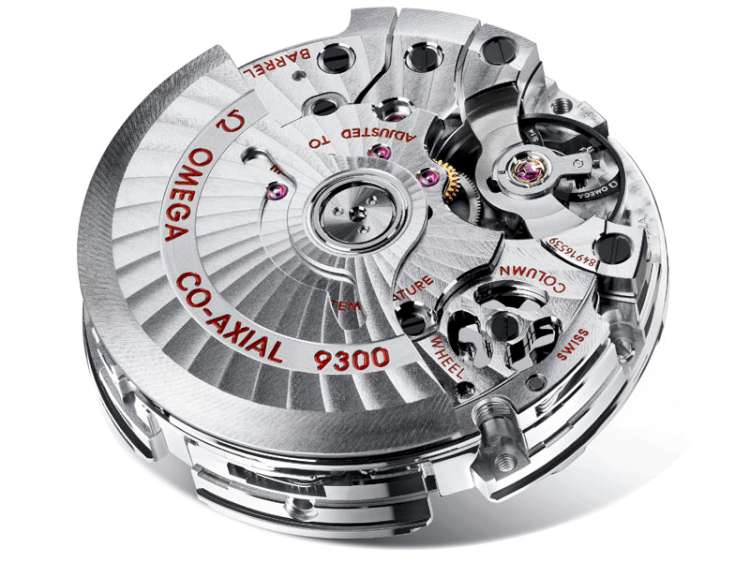 The watch is mounted on a grey leather strap with rubber insert and foldover clasp in ceramic. The watch has a 4-year guarantee and it is delivered in a special presentation box. 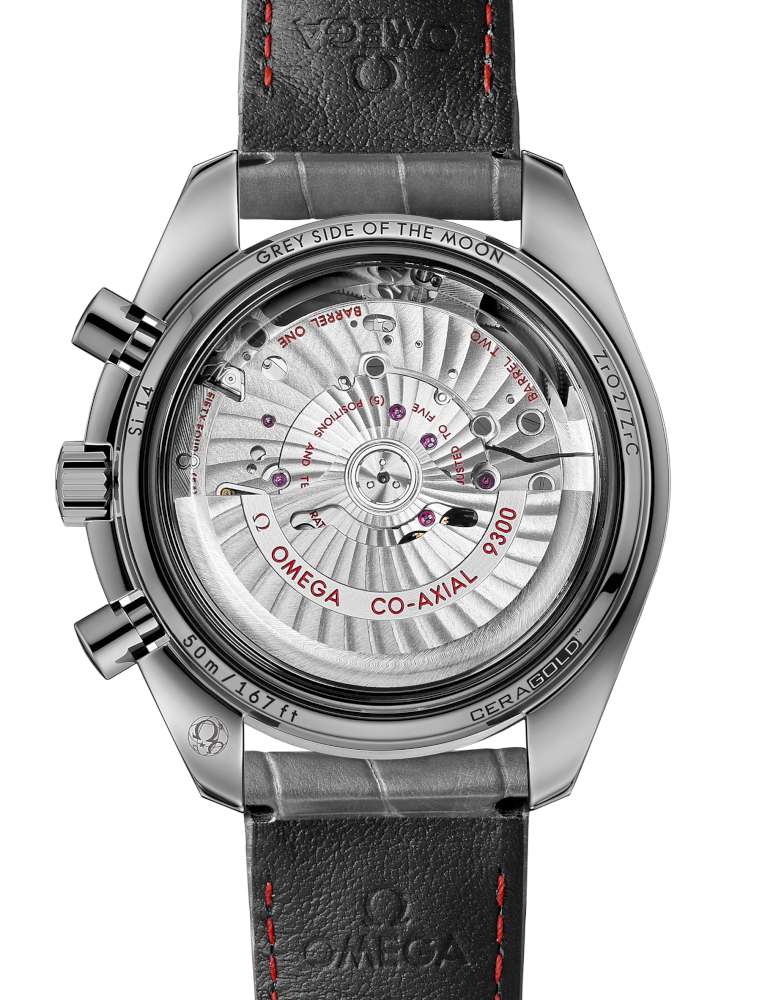 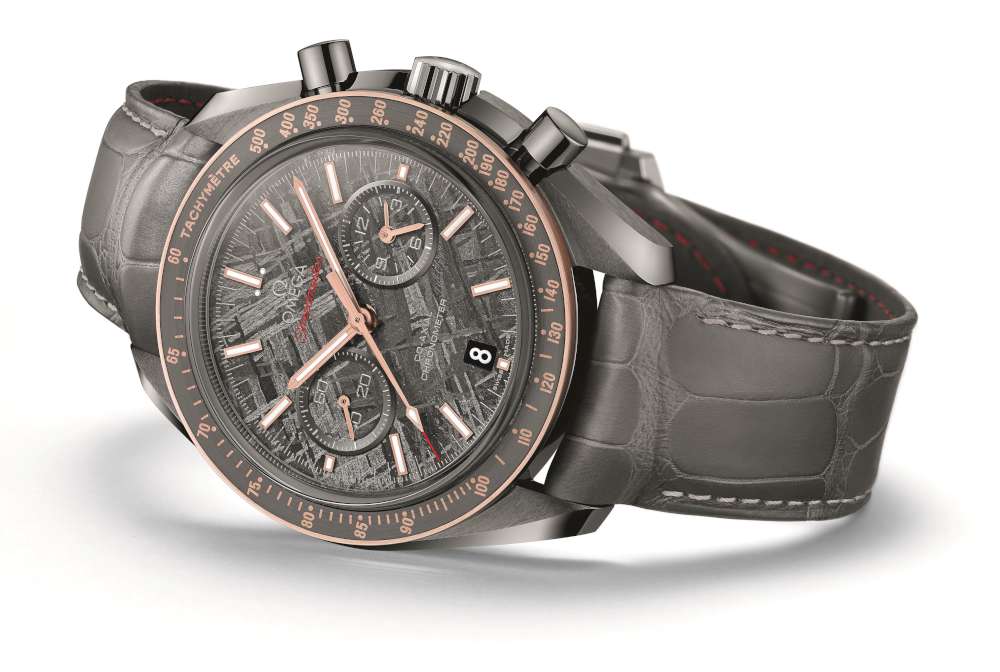