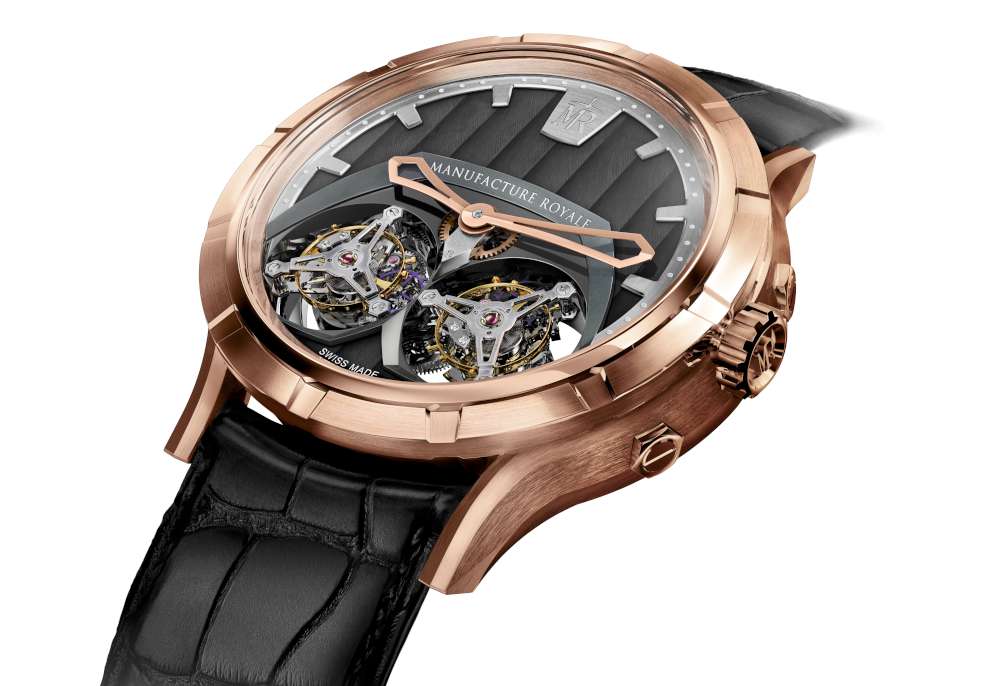 Double tourbillons is something that reminds you of Roger Dubuis, Greubel Forsey and Speake-Marin, but the 1770 Micromegas is a bit different. The two tourbillons have different speeds of rotation, 1 rpm and 10 rpm (take a look at the video futher down on this page) and different balance speeds, 28,800 vibrations per hour (4 Hertz) and 21,600 vibrations per hour (3 Hertz). This is quite an achievement, because the two balances look very similar – both are in brass – and so their difference in frequency must be attained either through the screwed weights or a difference in their balance springs. The two tourbillon cages are in different materials, titanium (lighter) used for the faster left-hand tourbillon, and brass for the right-hand tourbillon. Both are connected to a torque stabilizer which somehow combines the information arriving from the two regulators to determine the rate of the going train. 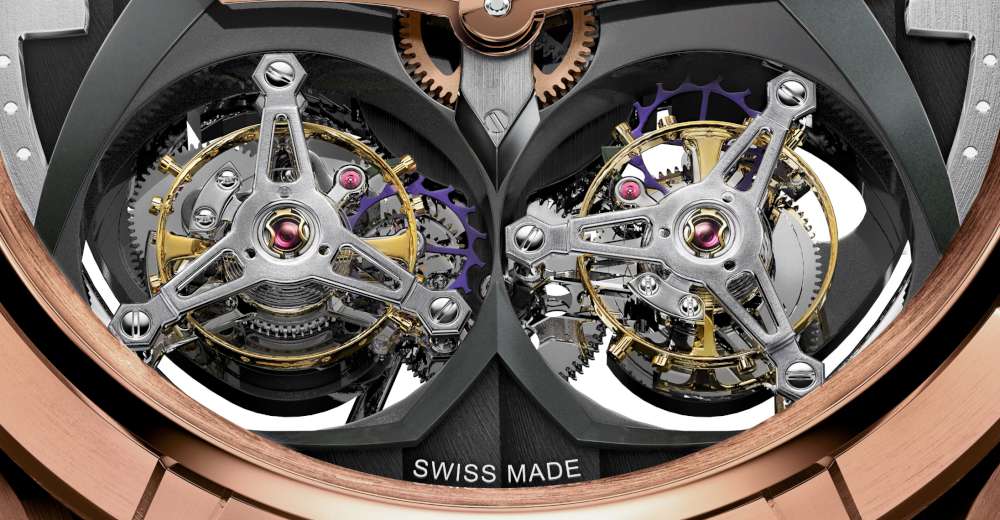 All this is part of the MR04 calibre, designed and built in-house. The brand’s remarkable technical skill is shown by the use of silicon for the escape wheels and pallet forks, and by an 80-hour power reserve, exceptional for a tourbillon that is generally a complication that absorbs a lot of energy. The transparent caseback reveals more of the movement, with the skeletonized oscillating weight and the bridges finished with Côtes de Genève. 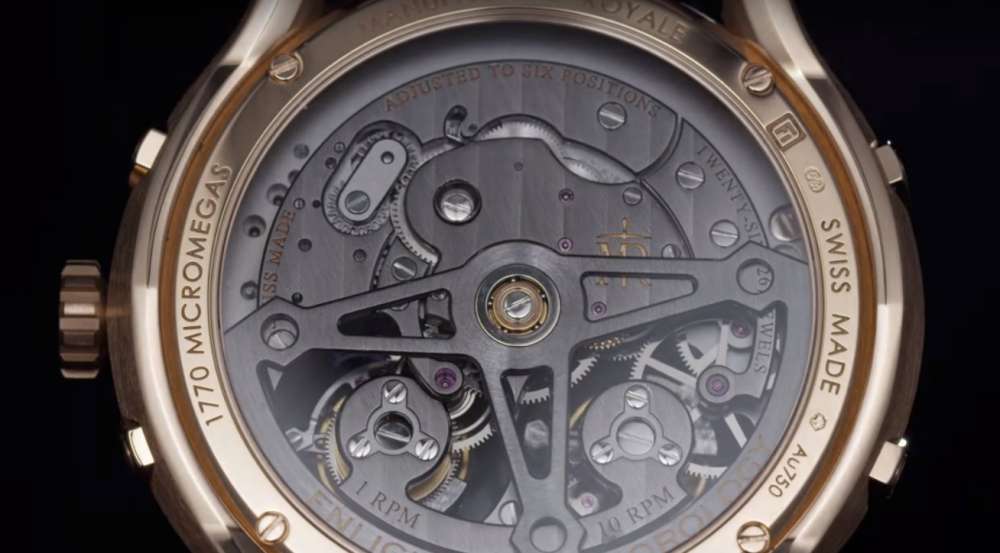 In just a few years, Manufacture Royale (founded in 2010) has succeeded in creating a powerful aesthetic identity, achieved by means of its own case design featuring two lateral pieces that hug the main case, fastened to it by four visible screws, and extend to form the lugs. The bezel has twelve flutings at the hour markers, corresponding to a ring with hour and minute markers at the edge of the dial. The wells for the two tourbillons are framed by an arch in metal with the brand name. The skeletonized hands are sword-shaped, and coordinate with the two tourbillon bridges. The dial is made in a rubber-effect black lacquer, which is somehow combined with SuperLuminova. The case is 45 mm in diameter and 11.8 mm thick. 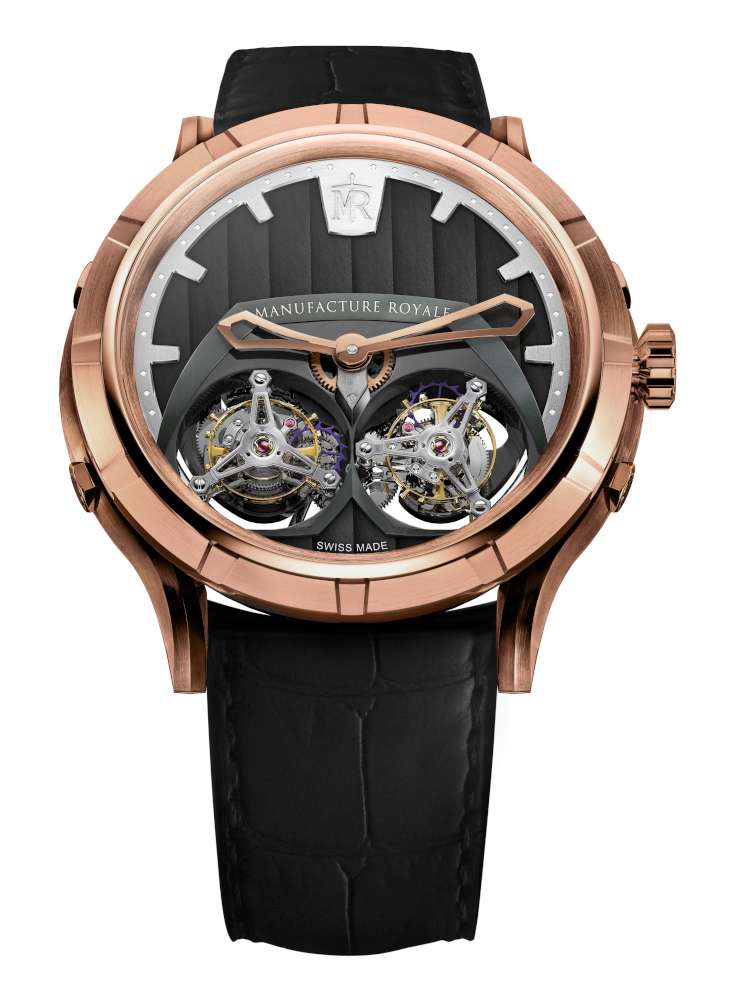 I have a suspicion that this hand shape is a reference to the sword in the MR logo, perhaps a reference to the famous dictum “the pen is mightier than the sword” that is traditionally associated with Voltaire. The philosopher, who spent twenty years of his life in a small town near Geneva and helped found a watchmaking industry there, is the brand’s historical point of reference. Voltaire wrote a short story called Micromegas, in which a 120,000-foot-tall giant is expelled from his home planet Sirius as a punishment for his dissenting ideas, arrives on Earth, and after observing the dispute amongst its inhabitants, concludes that peaceful interaction and tolerance are essential for living in peace.

The watch has an alligator strap with a folding clasp. The version shown in the images is in gold with titanium elements on the dial, and costs $163,000. An all-rose-gold version costs $181,500, and a version with titanium case costs $151,000. Further information from the Manufacture Royale website. 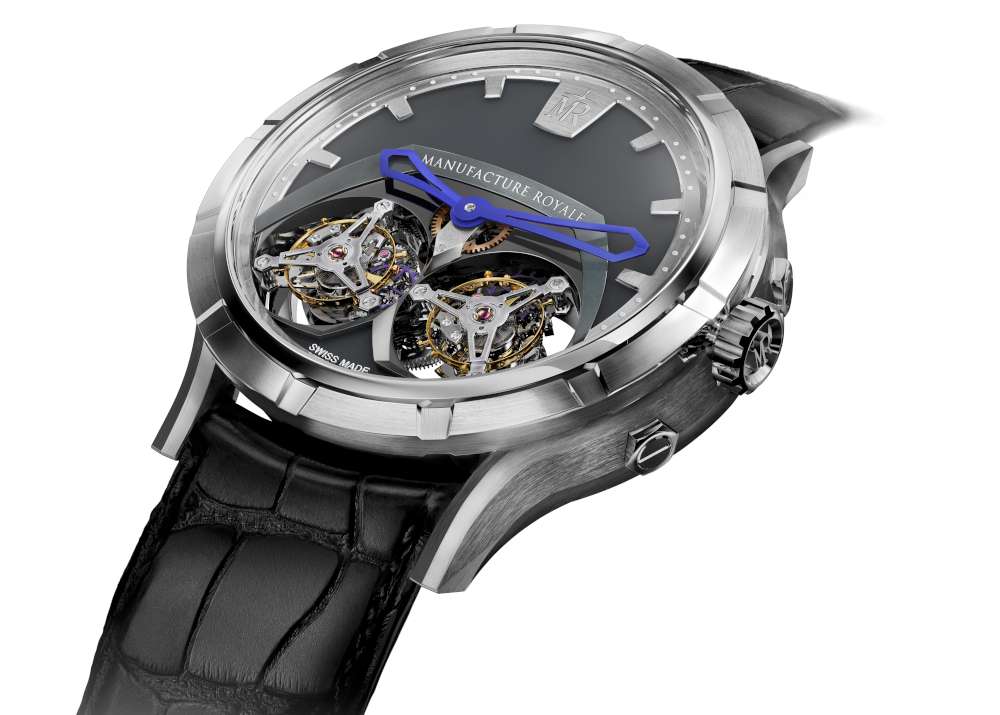