This year marks Girard-Perregaux’s 225th anniversary, and the brand have presented Place Girardet, a watch named after the location in La Chaux-de-Fonds where the company was founded and still operates. Girard-Perregaux have taken the idea of a limited edition to a new level: not a numbered series from 1 to 225, but from 1791 to 2016. In addition, the 225 watches look similar but are in fact all different. There are different dial designs, expressing the way styles have changed over the centuries: in practice, the dial changes every 10-15 years. Each piece has a small gold plaque bearing the year, and an important event is engraved onto the dial. So the first (which presumably will go to the Girard-Perregaux Museum) celebrates the foundation, the 1867 watch celebrates a Tourbillon Medal, 1880 the first wristwatch, 1999 the Automatic tourbillon with gold bridges, and so forth. So a customer could choose a year that is important to him or her, and they have to accept what they get in terms of the message, though there are some non-watchmaking events, such as 1808 which marks Beethoven’s Fifth Symphony, and 1963 celebrating the first woman in space. 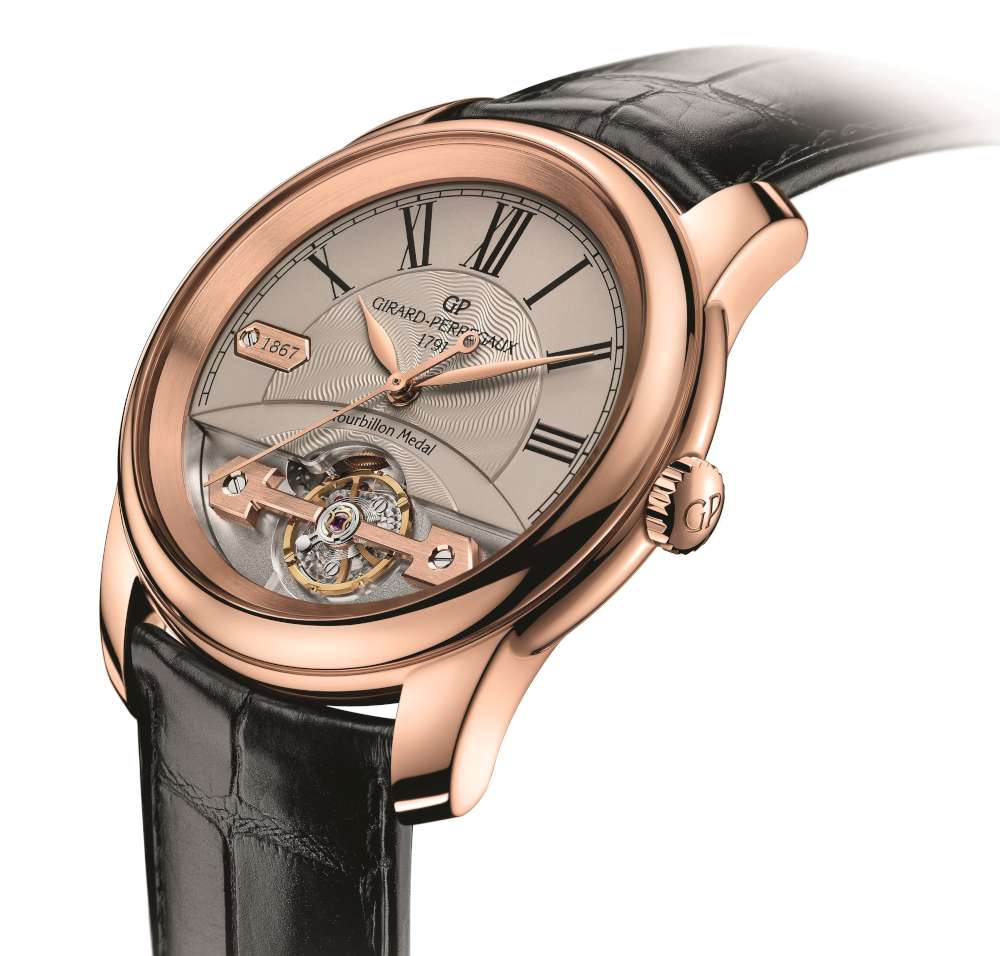 New logo, new use of the golden bridge

The watch has other features of interest. It is the first piece to have the new Girard-Perregaux logo, very similar to the previous version but with the addition of the year 1791. And for the first time, the brand’s iconic Golden Bridge is used with Girard-Perregaux’s Microvar balance – up until now, the Golden Bridge was used for the brand’s tourbillon watches. The Microvar balance improves the conventional balance by means of 6 regulation screws and 2 flyweights on the rim of the balance wheel, offering finer adjustment and better precision. 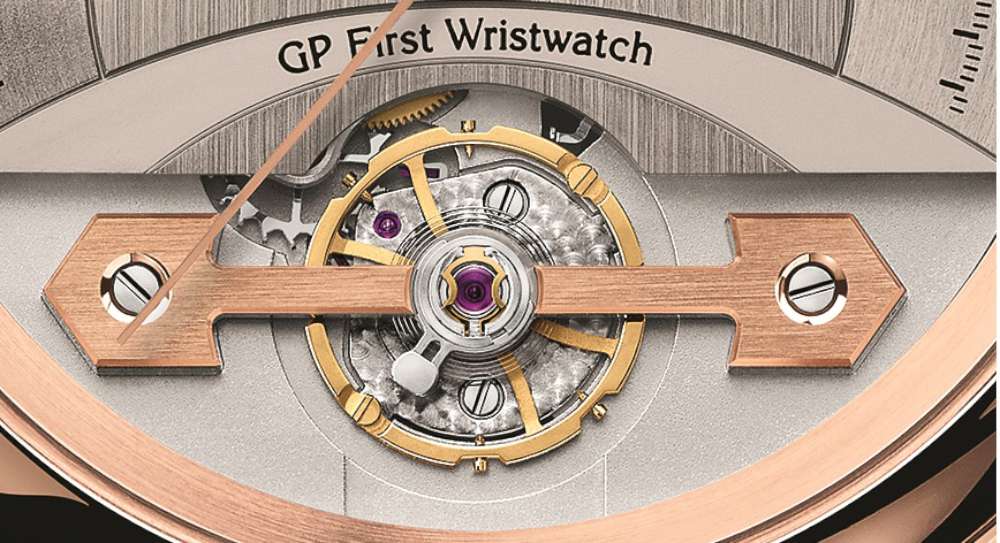 The movement is the new GP01800-0005, a development of the existing GP01800, though it required a lot of work because it shares only 20% of its components. The new calibre was developed in just ten months. The principal feature of the new movement is that the balance has been moved to the dial side to make it into a visual hallmark. It provides hours, minutes, central seconds, with a power reserve of 54 hours. It can be seen through the sapphire caseback, with sunburst decoration on the gold oscillating weight, Côtes de Genève on the mainplate and gear train bridges, and an engraved eagle, a Girard-Perregaux symbol since 1897. The movement runs at 28,800 vibrations per hour, 4 Hertz. 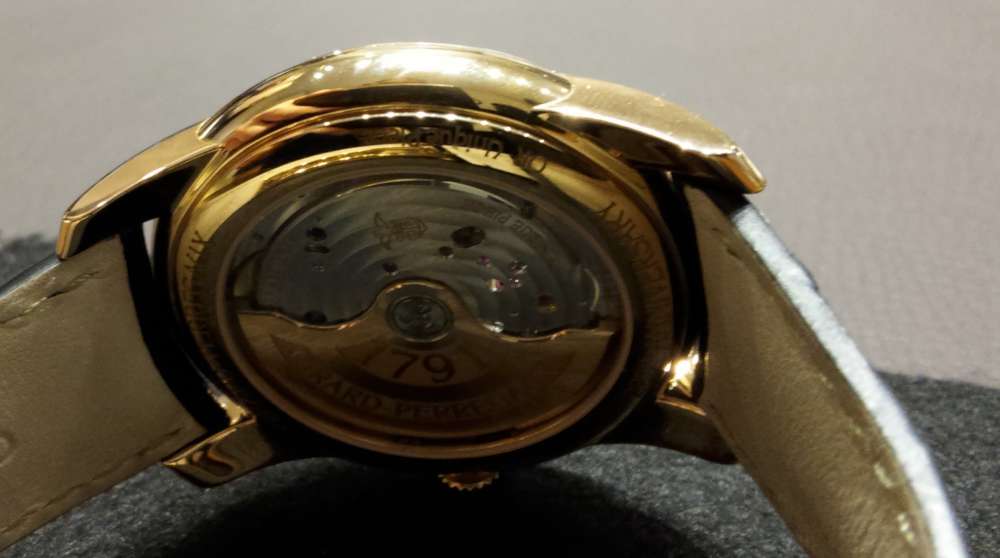 The Girard-Perregaux Place Girardet has a case, in pink gold, 41 mm in diameter and 10.89 mm thick, water resistance 30 metres. The watch has leaf-shaped hands, and a black alligator strap with pink gold folding buckle. 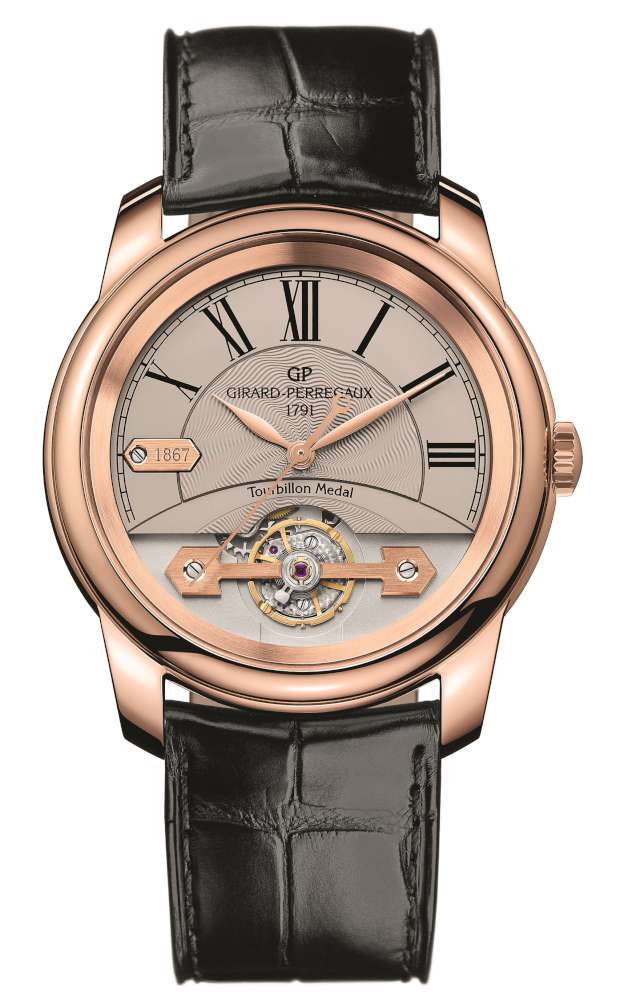 Each watch costs €32,900. The piece demonstrates Girard-Perregaux’s lofty standing as a watchmaker, with the freedom to move in unusual directions and take decisions that most brands prefer to avoid. Just one example: this watch doesn’t have a date window, and in my opinion it benefits from its absence.

In the illustrations below, examples of the different watch faces. 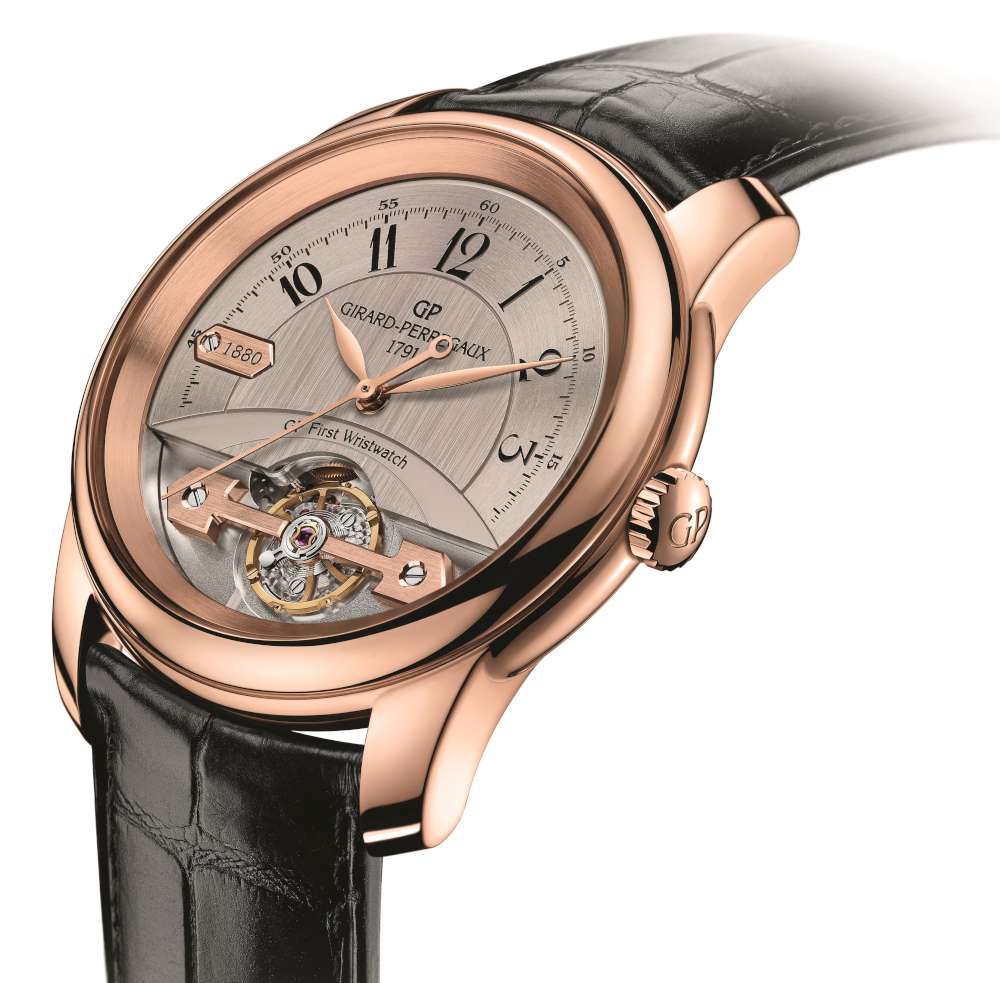 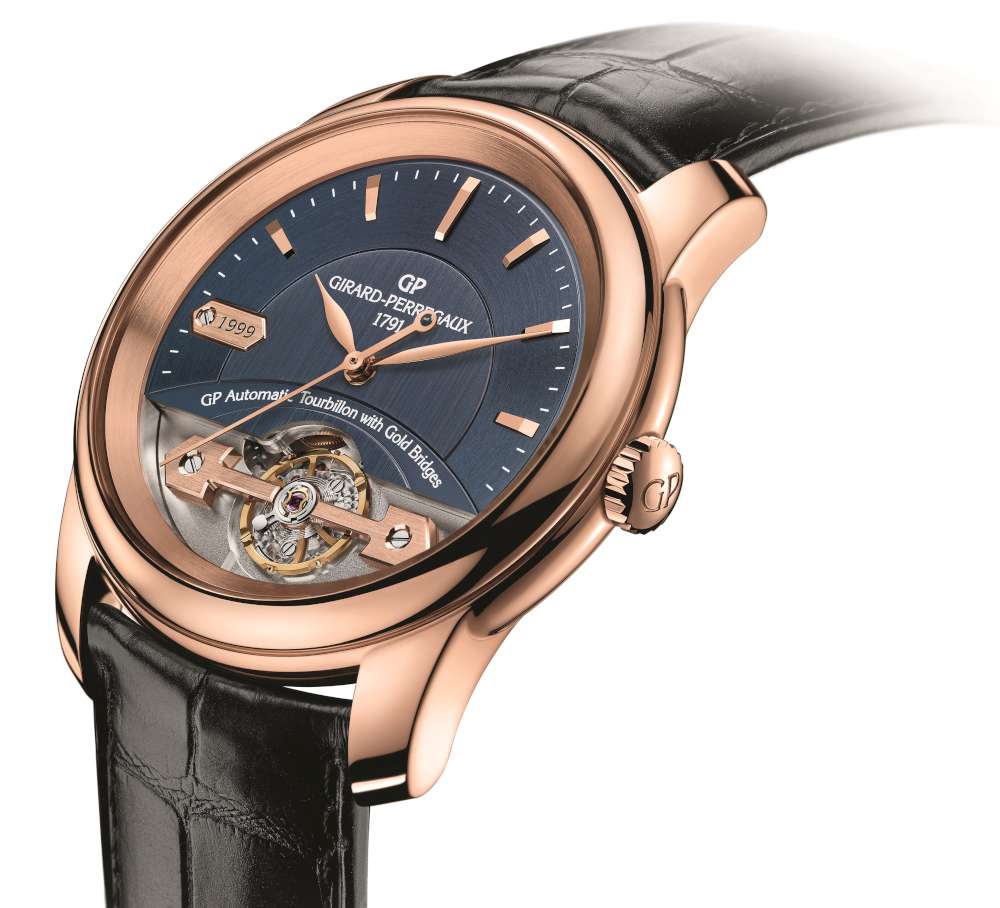 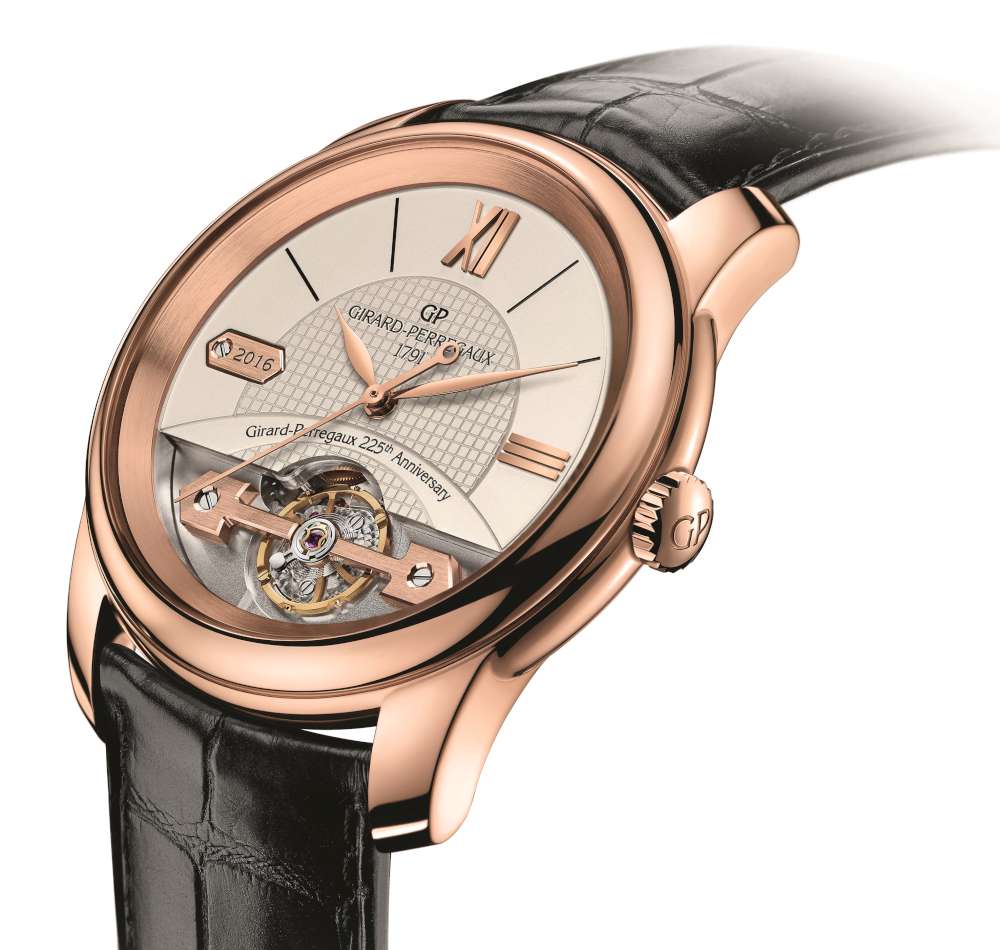