Without doubt one of the 2016 watchmaking highlights, the Grand Deck Marine Tourbillon by Ulysse Nardin is like having a J-class yacht on your wrist. With teak decking and a boom indicating the minutes, pulled by tiny cables running through pulleys, like the ropes on a sailing boat, the watch is an unusual concept, beautifully executed. What’s more, it has a flying tourbillon, whose delicate, precise beats keep the watch on course. 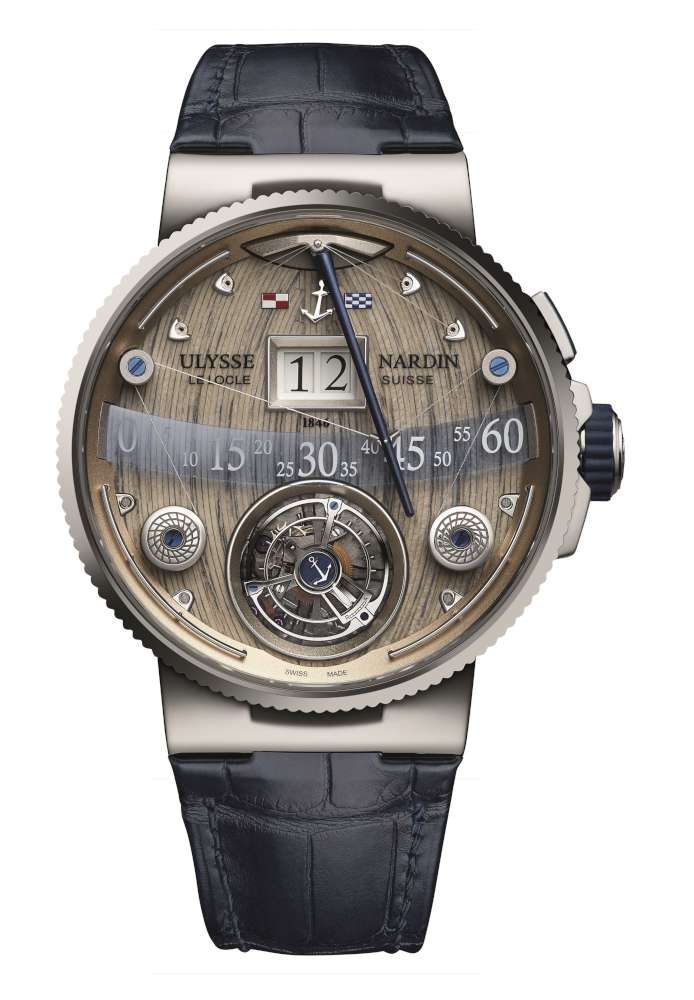 The deck, or rather the dial, is beautiful, with its curving lines of teak planking requiring who knows how many hours work by a micro-carpenter. The boom in blued aluminium steals the show, pivoted at the top of the dial, and pulled by nanowires 0.0357 mm in diameter. That means about one-third of the thickness than a human hair. Even so, this cable is super-strong, capable of resisting a stress of 1.41 kg without stretching. It is made of a material that will be familiar to sailors, Dyneema, often used to replace steel rigging cables because, weight for weight, it is about 7 times stronger than steel. The boom traverses across the blue artificial sapphire spinel arc bearing the minutes numerals, and when it reaches 60, it returns back to zero, not instantaneously, but in a slow and graceful movement lasting about 5 seconds, controlled by a regulator. The hours are shown on a double digital display. A pusher at 2 o’clock is used to adjust the hours forwards or backwards. 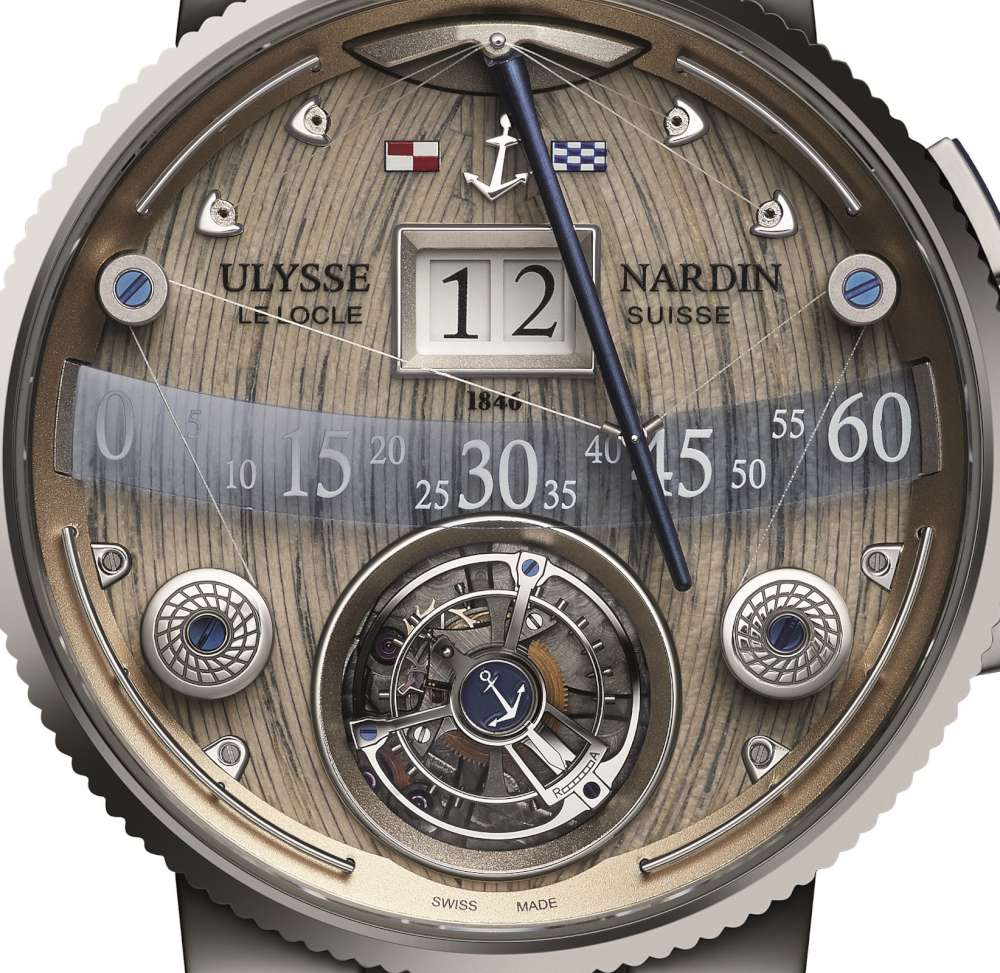 A deck with standing and running rigging

Like most yacht decks, the dial is filled with all sorts of accoutrements. The four pulleys guiding the wires are fasted to the deck with blued screws and resemble winches. At the top of the dial, there are four more fixed cables that echo the standing rigging of a yacht, though in this case they are purely decorative. On either side of the Ulysse Nardin anchor logo, two pennants show the letters U and N in maritime symbols. The nautical effect is heightened by steel handrails inside the bezel flange. 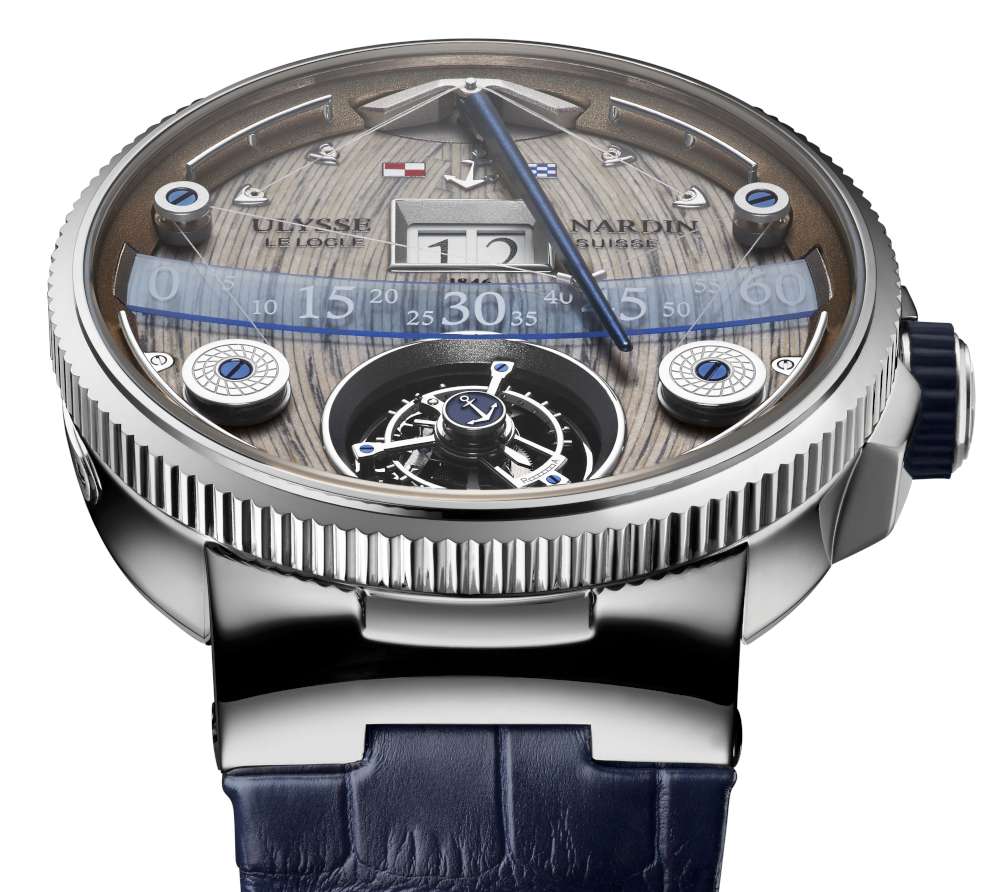 The case is in white gold, 44 mm in diameter, with a water resistance of 100 meters. A plate attached to the caseband is engraved with the watch number – this is a limited edition of 18 pieces. The bezel is fluted. The crown is screw-down, with a blue rubber exterior sheathing. The crown protector is asymmetric, so that there is room for the pusher at 2 o’clock. The alligator strap has a white gold folding buckle.

The UN-630 movement, with 469 components, was designed specially for this piece, and it is hand-wound. The tourbillon balance runs at 3 Hertz, 21,600 vibrations per hour, and its cage makes one revolution in 60 seconds. There are two mainspring barrels, one driving the timekeeping part of the movement, while the second powers the double-disc hour display and the retrograde minute display. Power reserve is about 52 hours. The spiral mainsprings can be viewed through the caseback and provide an indication of the state of winding. 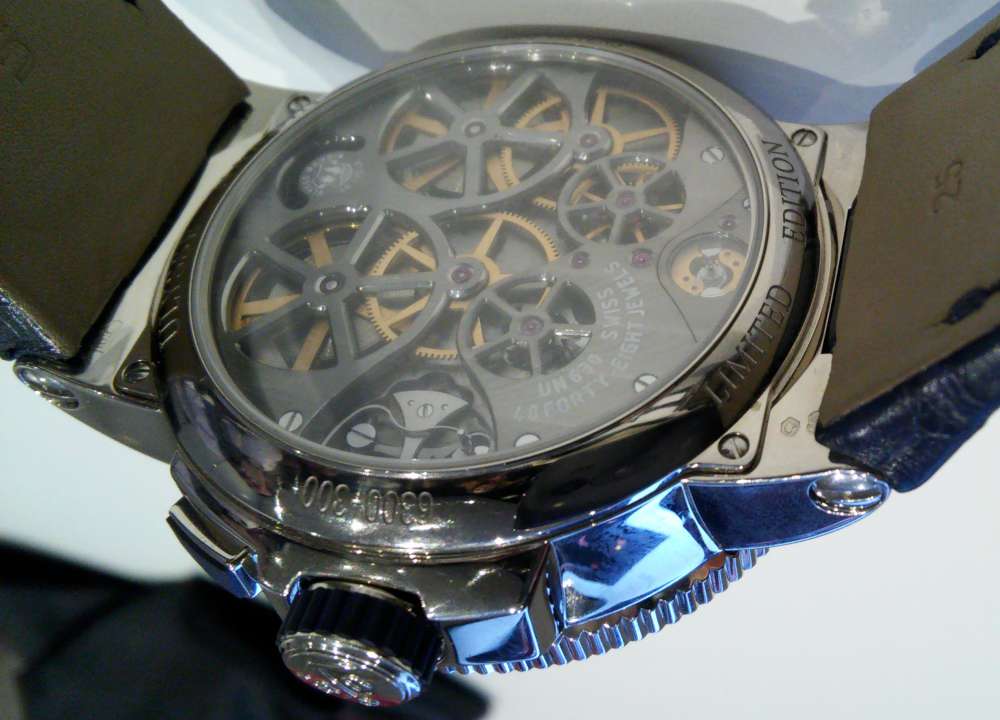 The Ulysse Nardin Grand Deck Marine Tourbillon is reference 6300-300/GD, a limited edition of 18 pieces in 18-carat white gold. The price of the watch is €280,000, the same figure for Swiss francs or dollars (at least at the time of the presentation in March 2016). 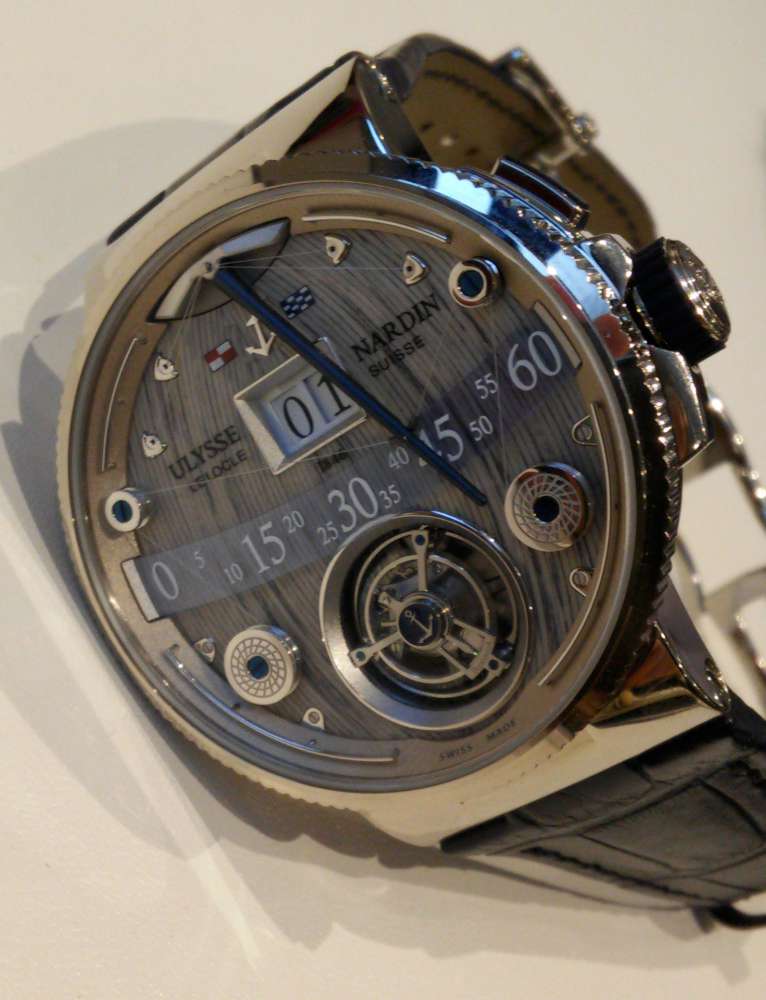