Hey, if I had 19,100 euro to invest – or just to enjoy on a fine watch – this is where I’d put it. It”s a lovely chronograph, intelligent and functional, measuring up to 30-minute times to an accuracy of one hundredth of a second, with a splendid movement, and a beautiful design evocative of a 1916 Heuer stopwatch. And it is supplied with a dashboard mount and a table stand, making the piece multifunctional. Lastly, with just 100 pieces made, I think that this is going to run out almost before it reaches the boutiques. Instant collectability. 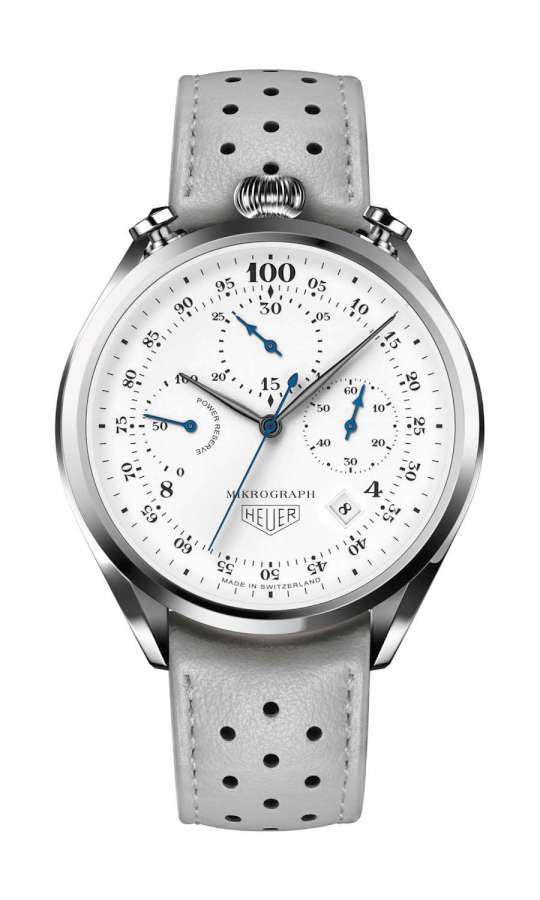 It is based on the 1916 Mikrograph Heuer, the first stopwatch capable of recording times to the nearest 1/100th of a second. The new wristwatch, TAG Heuer Carrera Mikrograph, presents the same classical style, with white enamel dial, painted numerals, and a design based on early sports chronometers. The watch has a Carrera case, built so that the circular central part can be lifted away from the lugs, ready to be fitted into the table stand or wall/dashboard mount. 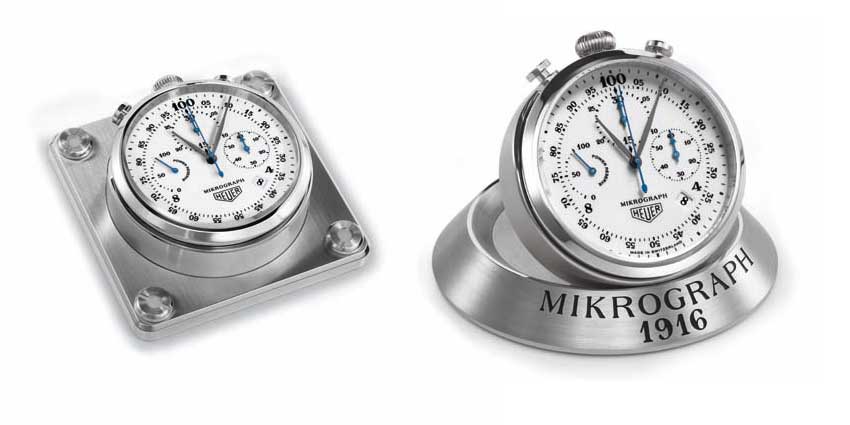 Its appearance is dominated by the bull-head pocket-watch style arrangement of pushers and crown, at the top of the watch. The mushroom-shaped pushers are also a reference to the earliest Heuer chronometers. The TAG Heuer designers succeeded in retaining the character of the 1916 stopwatch, even though the layout is very different. 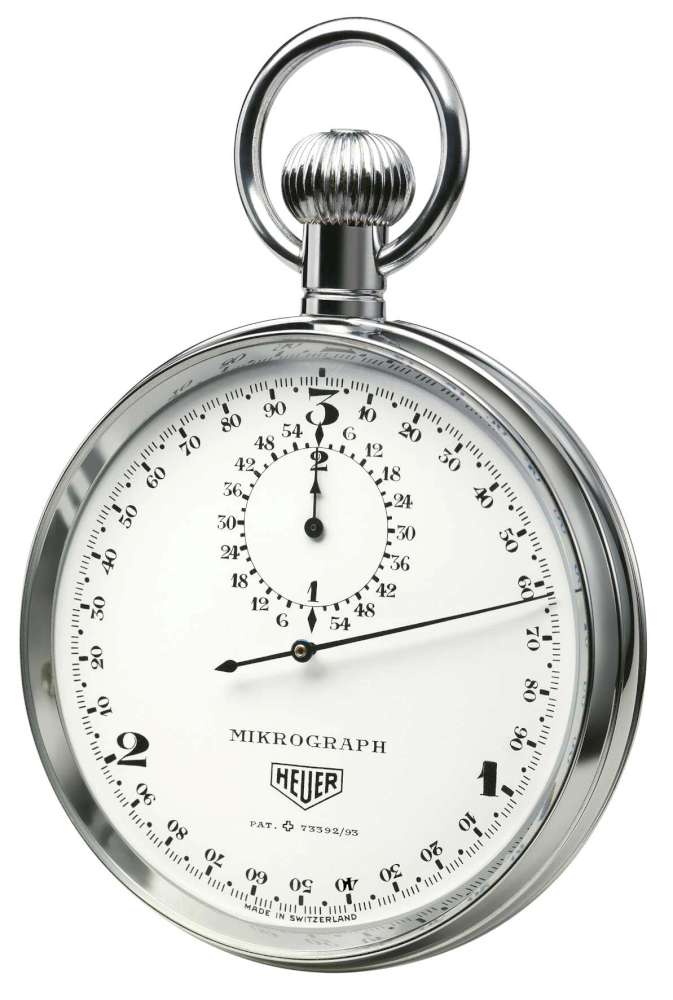 While the 1916 stopwatch has just a single centre-pivot hand rotating once every three seconds, and a subdial recording up to two minutes, the Mikrograph Anniversary Edition watch has an hour hand whose scale has been reduced to just the 4 and 8 hour numerals, and a minute hand reading off a scale at the outer edge of the dial. The three chronograph hands are all in blued steel, with the centre-pivot hand revolving once a second, a seconds counter at 3 o’clock, and a 30-minute counter at 12 o’clock. The watch is given perfect visual balance by the inclusion of a power reserve indicator at 9 o’clock. The Micrograph and Heuer logos are identical to those on the historical watch, and likewise the phrase “Made in Switzerland.” The date window just below the 4 o’clock numeral is so subtle as not to disturb the overall layout. The watch is large at 45 mm, with the characteristic sloping lugs that improve wearability, and a grey calfskin strap with motorsport-type piercing, and a folding clasp with Heuer logo and safety pusher. The case is waterproof-rated at 100 metres (10 bar). 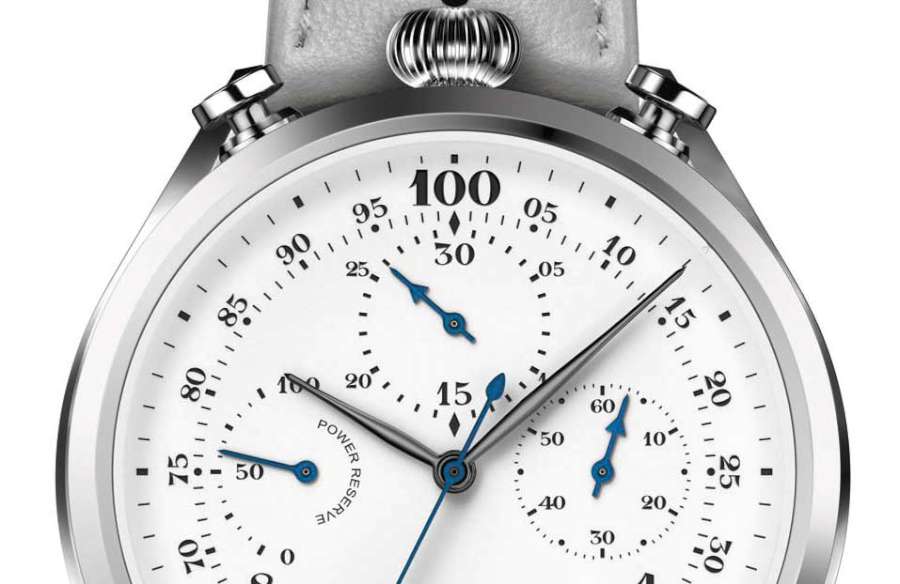 The watch is powered by the TAG Heuer Calibre Mikrograph 1/100 second movement, presented in 2011, the first column-wheel chronograph movement displaying times at a precision of 1/100th of a second with a centre-pivot hand. The movement is in fact two movements combined, with a total of 480 components and 62 jewels. One section is for the time, the other for the chronograph, each with its own mainspring barrel and escapement. The time-keeping mechanism has a balance running at the conventional 28,800 vibrations per hour, 4 Hertz, with a power reserve of 42 hours, and this section of the movement is automatic, wound by the oscillating weight visible through the sapphire caseback. 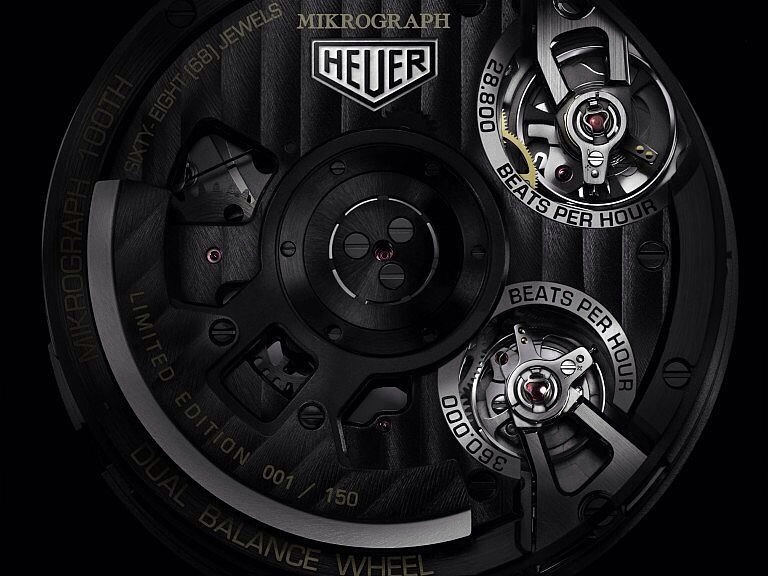 The second mechanism operates the 1/100th second chronograph, and has a power reserve of 90 minutes. It runs at 360,000 vibrations per hour, 50 Hertz, powering the central hand that performs a complete rotation every second. This part of the movement absorbs a lot of energy, and that’s why it’s kept separate from the timekeeping section. Starting the chronograph has no detrimental effect on timekeeping. It is wound using the crown – turning the crown winds both the chronograph and the time parts of the movement. The power reserve indicator is marked from 0 to 100, and it indicates the percentage of power left in the chronograph mainspring. The Mikrograph movement was designed and built in-house at TAG Heuer, with some parts built by Atokalper (part of the Sandoz group) and Dubois Depraz.

The price of the watch is €19,100. It is a limited edition of 100 pieces. Comparing the price to the TAG Heuer Carrera Mikrograph – around €45,000 – provides another indication of the remarkable proposition represented by the Mikrograph Anniversary. I presume that having sold virtually all of the 2011 version, the development costs of the movement have been absorbed.