The Blancpain Fifty Fathoms Bathyscaphe Chronographe Flyback Ocean Commitment II is a watch celebrating the brand’s efforts in the area of ocean environmental protection and research. It first appeared as a limited edition watch in 2014. It introduced a new concept of limited edition watches, providing purchasers not only with a rare piece, but making them members of an exclusive club. Purchasers are introduced into the Ocean Commitment Club, with privileges such as the possibility of meeting Blancpain partners, accessing a reserved area on the Ocean Commitment website, and private invitations to conferences about scientific expeditions, premier film screenings and report presentations. They also receive a certificate that states that Blancpain, on sale of the watch, paid €1,000 to the ocean protection organizations working with Blancpain’s Ocean Commitment. Purchasers of the 2014 watch received a copy of a book titled “Fifty Fathoms – the Dive and Watch History 1953-2013.” The volume had the same edition number as the respective watch. Over the last two years, Blancpain has financed 10 scientific expeditions, and doubled the secure marine areas worldwide with an extra 3 million square kilometres placed under protection. More about Ocean Commitment here. 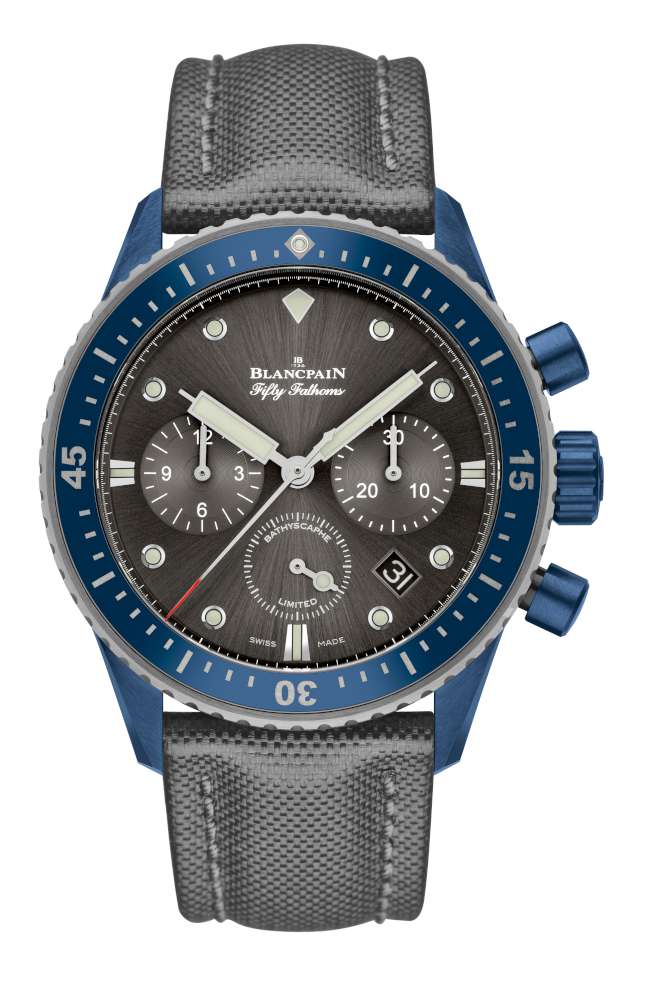 The 2014 watch had a grey plasma ceramic case that resembled brushed stainless steel: the new 2016 edition is entirely blue. The Blancpain Fifty Fathoms Bathyscaphe Chronographe Flyback Ocean Commitment II (BOC II) is another limited edition of 250 pieces, in which the grey-blue colour is one of its distinctive features. The case, 43.6 mm in diameter and 15.25 mm thick, is made by means of successive die-moulding and firing stages that produce a component with very high hardness. Press moulding was used for the case, caseback and bezel, and injection moulding for the crown and pushers, with a lot of research and development dedicated to ensuring that all reached the same shade of blue. The watch is supplied with the sailcloth-type strap as shown.

The dial is elegant in its simplicity, with applied hour markings, distinctive hands of rectangular shape providing space for lots of SuperLuminova, a continuous seconds hand at 6 o’clock, also with SuperLuminova to show the diver that the watch is working, and a SuperLuminova reference point on the bezel. I don’t really like the diagonally-placed date at 4.30 but the dial is so spacious that at least it doesn’t give an impression of overcrowding.

The BOC II has all the characteristics of a diving watch. It is water-resistant to 300 metres. It has a unidirectional rotating bezel with grey inserts and indices in Liquidmetal, a Blancpain amorphous metal alloy material formulated specially for use in combination with ceramic, to ensure perfect bonding with the ceramic bezel insert and guaranteeing the component’s overall scratch resistance. The sapphire window in the caseback displays the movement with its rotor bearing the Ocean Commitment logo and its distinctive bridge design.

One of the most important features of this watch is the fact that the chronograph pushers can be used under water, right up to the rated depth of 300 metres. This makes it a truly professional tool. At the same time, its sober design and particularly the restrained bezel makes it ideal as an everyday sports watch. It’s fairly thick, but the plasma ceramic makes it comparatively light.

The watch is one of the few with a movement running at 36,000 vibrations per hour, 5 Hertz, the logical rate for a chronograph because the chronograph seconds hand can indicate elapsed times to an accuracy of one-tenth of a second. The F385 movement has a flyback chronograph mechanism operated by a column wheel with a vertical clutch, so that putting the chronograph into operation has no adverse effect on time-keeping accuracy. The variable-inertia balance, with adjustable gold screw weights, is more robust and more accurate than the usual rate regulator. The movement has a silicon balance spring. Power reserve is 50 hours. 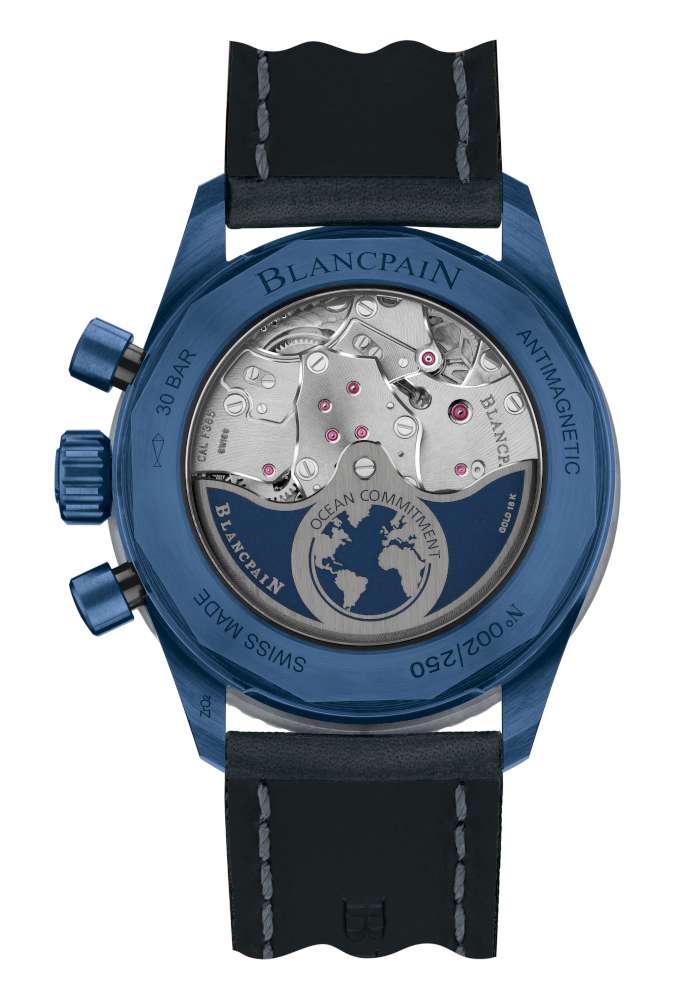 In addition to the certificate for Blancpain’s €1,000 donation to scientific ocean research, purchasers of the BOC II also receive a copy of the new book “Hans Hass, Awakening to a New World,” whose edition number corresponds to the watch’s serial number. Hans Hass is an Austrian biologist and film-maker who began exploring the underwater world in the late 1930s, and was the first to invent a water-proof case for the Rolleiflex camera.

The price of the Blancpain Fifty Fathoms Bathyscaphe Chronographe Flyback Ocean Commitment II, reference 5200 0310 G52A, is €19,080, £14,000, and it will be available in boutiques in mid-October.