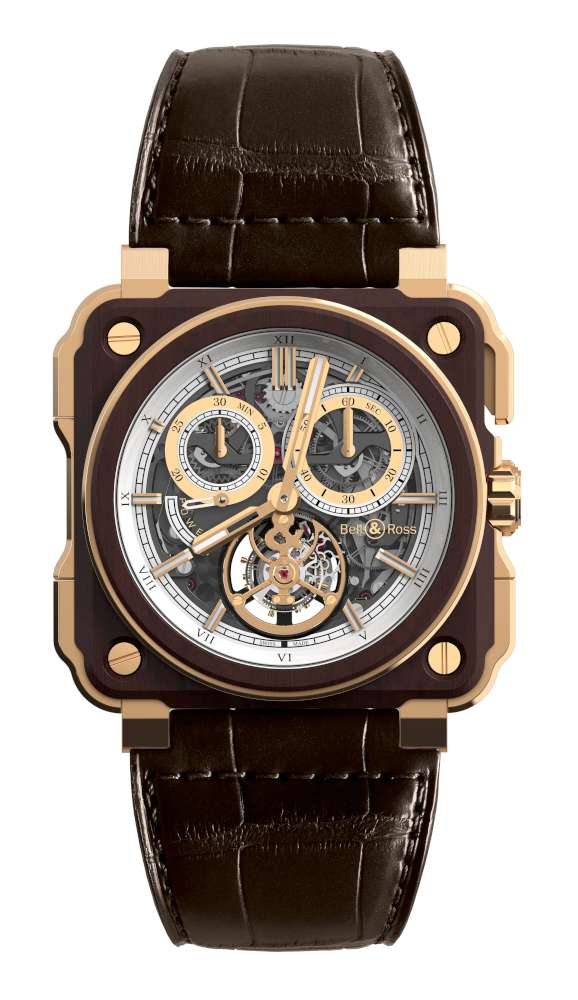 The Bell & Ross BR-X1 Tourbillon Chronograph is one of the three watches that the brand has presented in a marine chronometer style. Its complex square case is 45 mm in size, made in rose gold and rosewood, evoking the 19th century chronometers used on board ships. It has the commendable water resistance rating of 100 metres. The strap is in brown alligator with a rose gold pin buckle.

It’s a complex piece, with a 60-second chronograph counter at 2 o’clock, and a 30-minute chronograph counter at 10 o’clock, the latter with semi-instantaneous jumping hand. So it’s one of the few chronographs to have a layout without the central chronograph seconds hand. The chronograph is controlled by a column wheel, visible under the 12 o’clock hour marker, and it is operated by a monopusher at 2 o’clock, in the form of a rocker that has become part of the brand’s design identity. The watch is very three-dimensional, with a deep bezel, the hour markers and subdials suspended on the tinted sapphire dial, and the mechanisms beneath. The Roman numerals are very small, almost an afterthought: personally I think that they would have benefited from extra length as in the Bell & Ross Instrument de Marine. 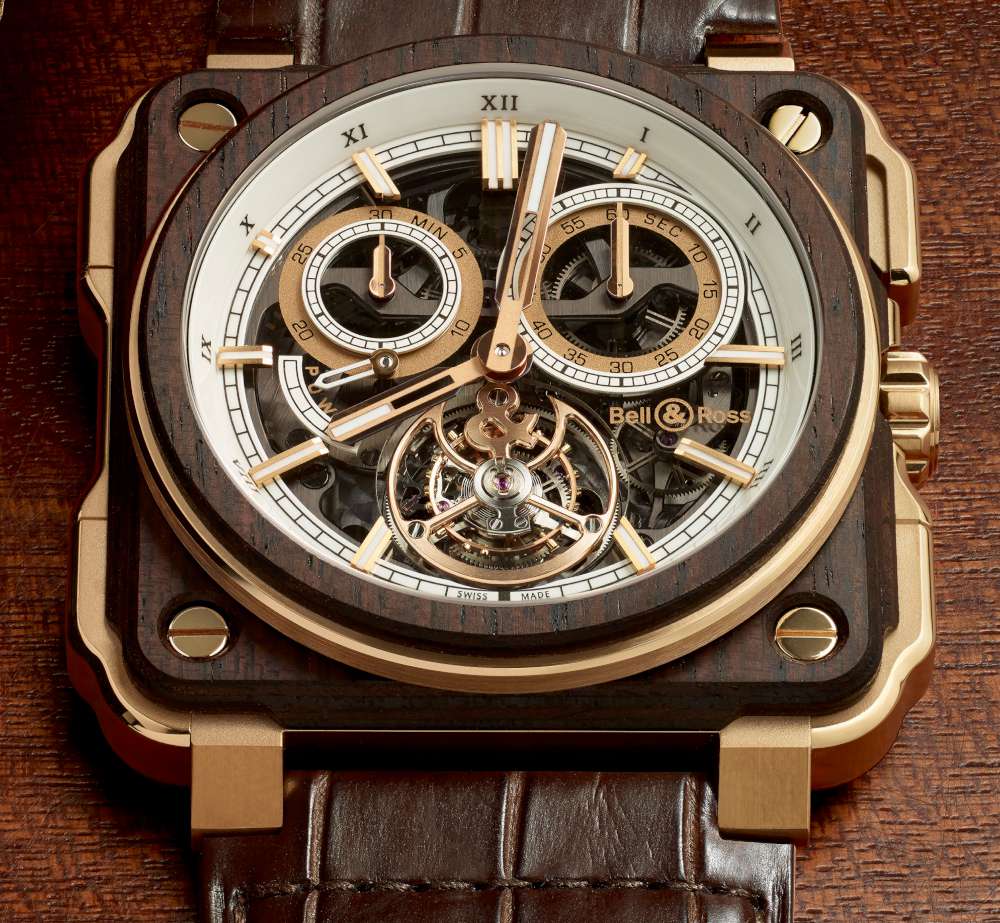 At 6 o’clock, the gilt tourbillon cage incorporates the ‘&’ symbol from the Bell & Ross brand name. The balance runs at 21,600 vibrations per hour (3 Hertz). The calibre is hand-wound, with an exceptional 100-hour (4-day) power reserve, indicated by a hand at 9 o’clock.

Part of the chronograph mechanism can be glimpsed through the skeletonized bridges and the grey-tinted sapphire dial. The overall impression recalls marine instruments as was the brand’s intentions. But the grey-tinted sapphire dial, the gilt frames of the subdials and the wide hands with SuperLuminova obscure just about all of the movement, which is a pity, because it’s a phenomenal piece of engineering. You don’t get to see much through the caseback either, with most of the space taken up by a dark DLC mainplate.

The BR-CAL.283 movement has 282 components and 35 jewels. It is made by MHC Manufacture Haute Complication, founded in 2010 by watchmaker Pierre-Laurent Favre. It is made with an integrated architecture – in other words, it’s not a standard time-only calibre with a chrono-tourbillon module on top, but it was custom-designed from the start.

Trying to find out more about the movement pulls up a complex story of Swiss “motorists” (movement specialists) and companies that appear, thrive, go out of business and are replaced. It was originally designed by BNB Concept (Matthias Buttet, Michel Navas and Enrico Barbasini), and it was used in the Hublot King Power F1 Tourbillon (2011) and the Romain Jerome Chrono Tourbillon (2012). BNB Concept stopped trading, parts of it were purchased by Hublot, and somehow the tourbillon monopusher chronograph was inherited by MHC, who now make it for other watches, including the Tourbillon Monopusher Chronograph by AkriviA. A phioto of the movement of this AkriviA piece shows more clearly how it functions, with a large gear wheel at the outer edge of the tourbillon cage, and a smaller intermediate wheel to the right, which swings left to mesh with the tourbillon seconds wheel and thus drives the chronograph seconds wheel, the very large gear centred on the top right-hand jewel. 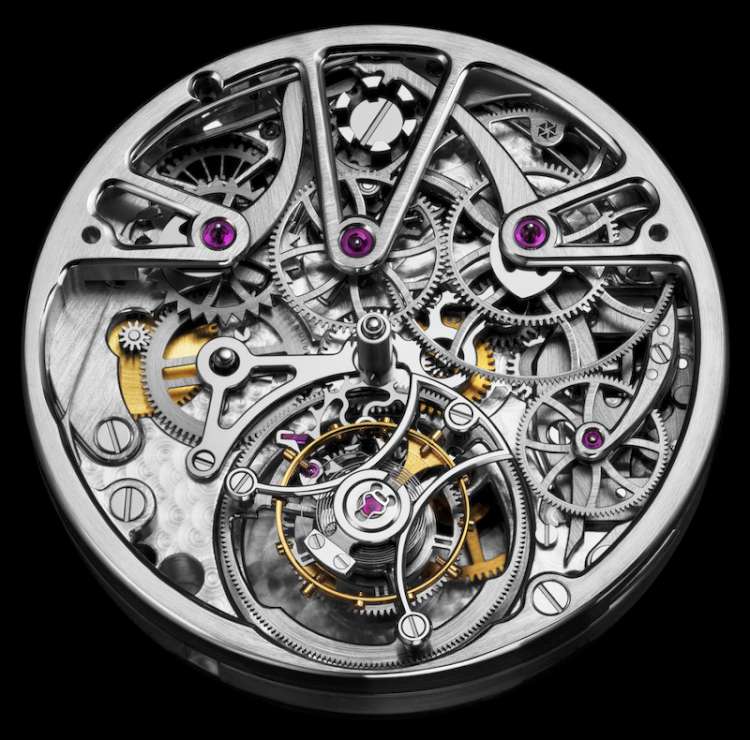 It’s obvious that for the Bell & Ross watch, the movement has been extensively redesigned above all as regards the bridge layout. To be honest, seeing the movement in the version above makes me wish that Bell & Ross had left more of it in view. It’s intriguing, with lots of mysterious details such as that curly shape on the tourbillon shape which I suppose could be connected to the chronograph minute counter, the unusual spoke design and so forth. But every watch is a compromise between engineering and aesthetics, and here it’s the marine style in wood, gold and gilt that wins the day. 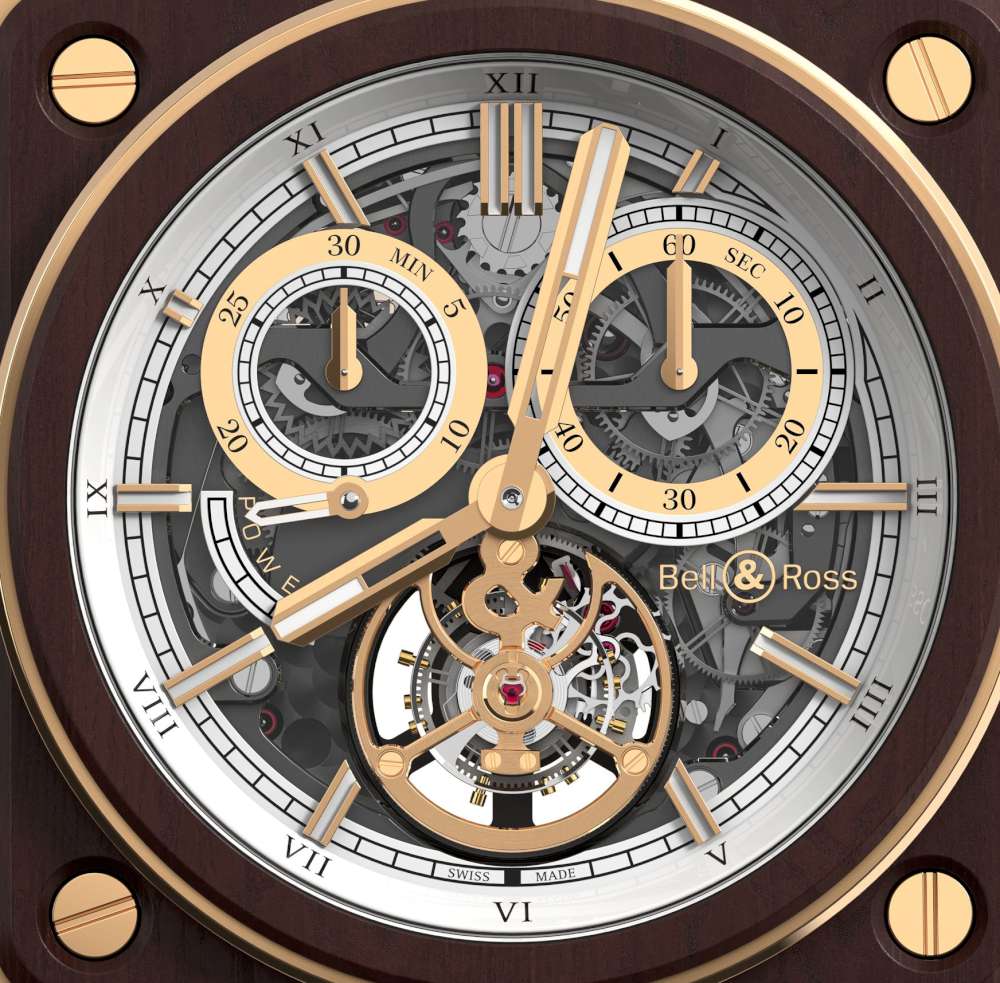