2016 marks the 85th anniversary of Jaeger-LeCoultre‘s Reverso, with several models celebrating the occasion, including this piece, the Reverso Tribute Calendar. It’s very easy to take a brand like Jaeger-LeCoultre for granted: they have a discreet, laid-back attitude. They don’t boast a lot about their achievements. They have many qualities: they have been a true “manufacture,” making nearly all parts of their watches in-house, since the 1860s; they have built over 1,240 calibres; and their watches offer incredible value for money. 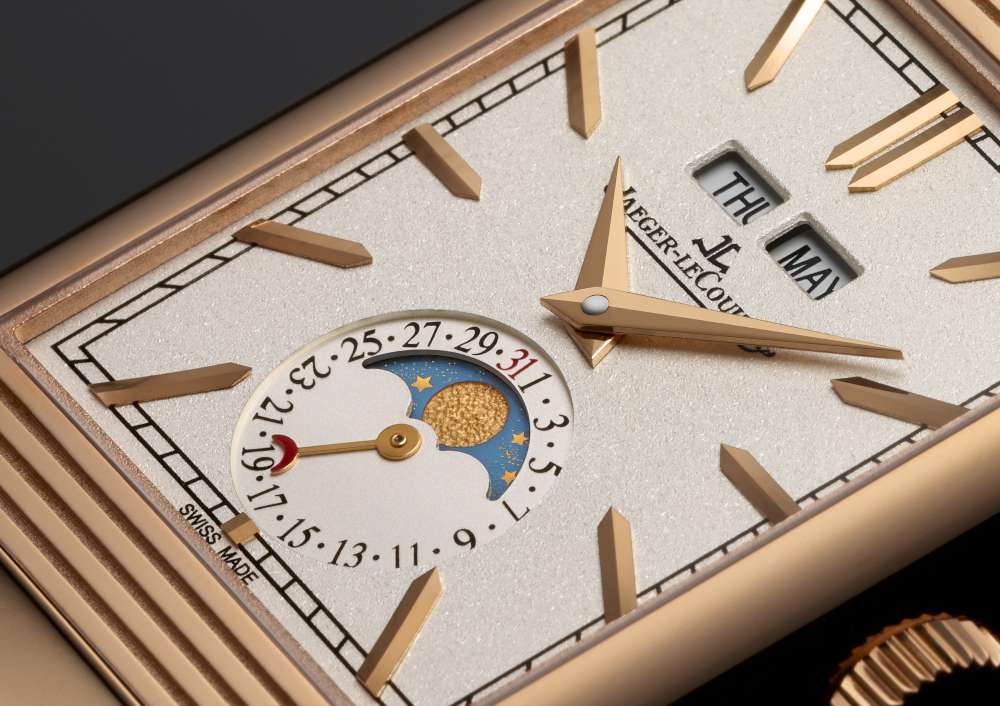 The Reverso was invented in 1931, in response to British officers who wanted a watch that enabled protection for the watchglass and dial during polo matches. It quickly became a classic, and in some parts of the world, the name Reverso is more familiar than Jaeger-LeCoultre. The invention is so powerful, so unique and distinctive, that, as for as I know, no manufacturers have attempted to make anything like it, and even fake watch manufacturers seem to steer clear. The case-flip mechanism becomes a sort of game. It is intriguing for its mechanical perfection, the sort of robust simplicity that I appreciate in the nail-clippers that I use from time to time.

Jaeger-LeCoultre watches also have another rare quality. I look at it and think, yeah, that’s pretty much perfect. There’s nothing I would change here. The Reverso Tribute Calendar is a good example. On one side, it displays a complete calendar with great economy, with day and month in two rectangular windows at the top, and date shown by a red crescent-tipped hand on the subdial at 6 o’clock. The moon is carefully crafted in hammered gold to give it texture and visual interest. Jaeger-LeCoultre have decided to leave out continuous seconds, and so there is no indication that the watch is running. But winding up a manually-wound watch before putting in on every day is one of those pleasant morning rituals that makes life more fun. This piece is wound using the crown in its first position, and it winds to lock. The crown is also used in position 2 for setting the time, and the day of the week by changing the time past midnight. Date, month and moon phase are set using recessed pushers on the side of the watch. The date pusher is at 4 o’cock, month at 2 o’clock, moon phase at 8 o’clock. A stylus is provided with the watch for this operation. 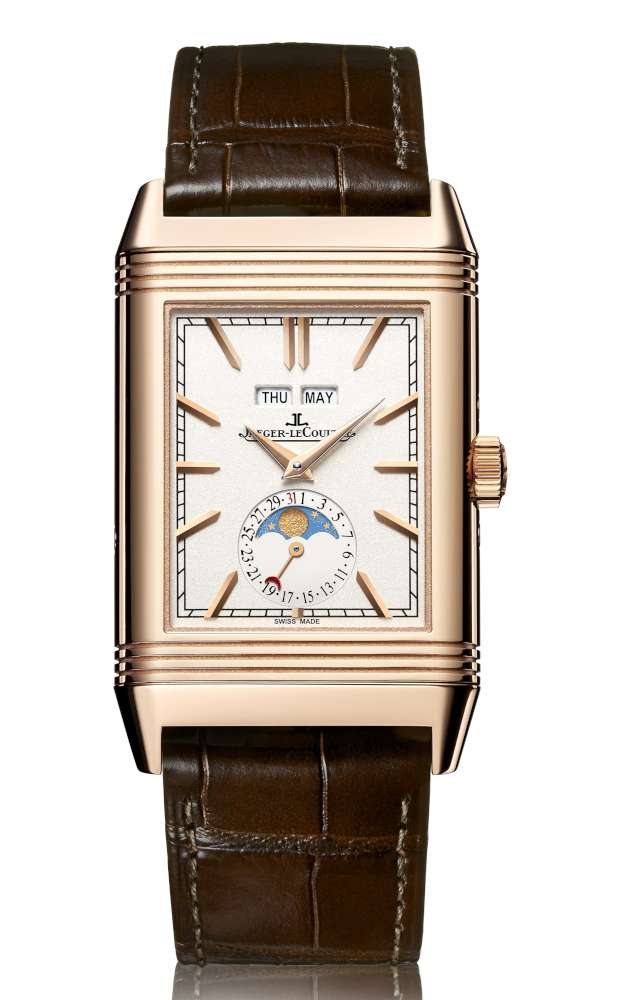 From top to bottom, it is perfectly symmetrical, well-balanced and clearly legible against the grained white dial. The case has all the Art Deco fascination of the historic models, with its clean, elegant fluting. The caseback has been altered slightly, with more rounded edges to increase comfort on the wrist. It’s quite large, 49.7 by 29.9 mm, 10.9 thick, but the square shape enables it to fit most wrists. It is in pink gold, water resistance 3 bar, 30 metres. 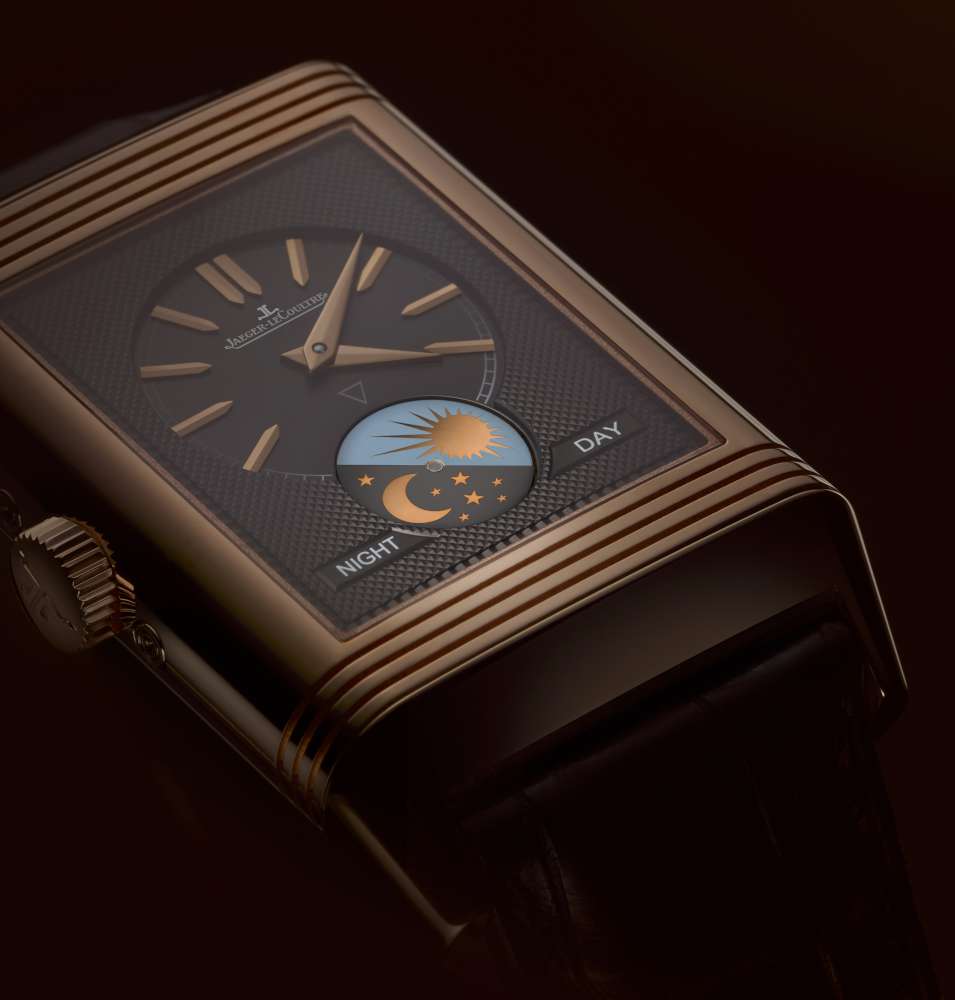 The earliest Reverso models flipped to reveal a plain caseback, but it wasn’t long before Jaeger-LeCoultre realized that it was the perfect way of presenting two separate functions. In the Reverso Tribute Calendar, the reverse presents hours and minutes for a second time zone, together with a day-night indicator, read in reference to a small triangle. The second side offers a total contrast to the calendar side, with an anthracite dial and clous de Paris texturing. The hour and minute indications are driven by the same movement as those on the calendar face, and so only the hour of the second time zone can be adjusted, not the minutes, which will always be the same on both faces. 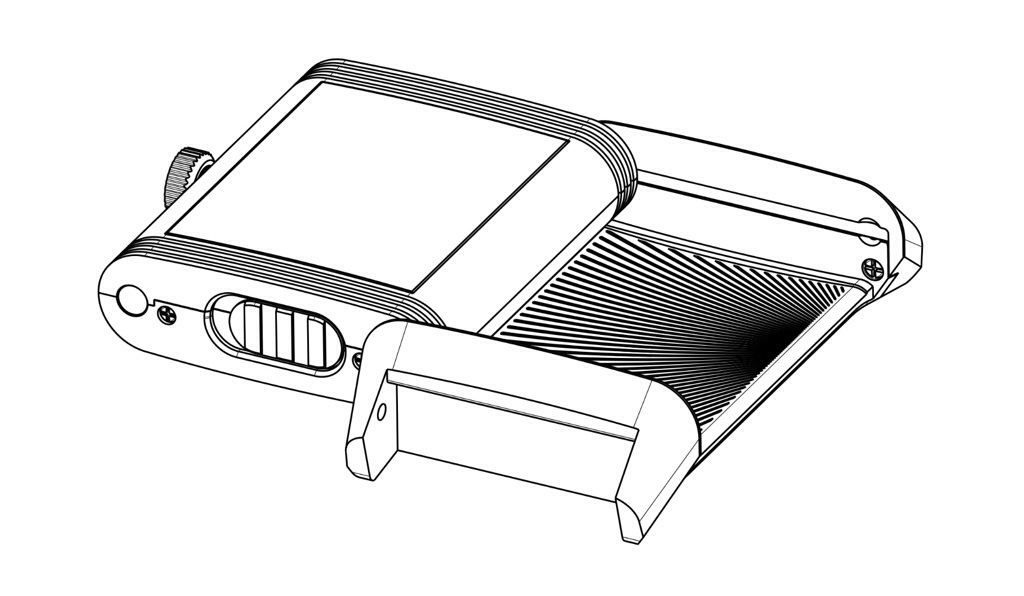 Adjustment is performed using a slider on the top side of the watch, revealed by turning the case over but without closing it. Pushing the slider moves the hour hand one hour at a time, and progressively rotates the day/night indicator disc. Jaeger-LeCoultre’s designers were evidently thinking of frequent travellers, who can adjust the second time zone quickly without having to find the stylus. 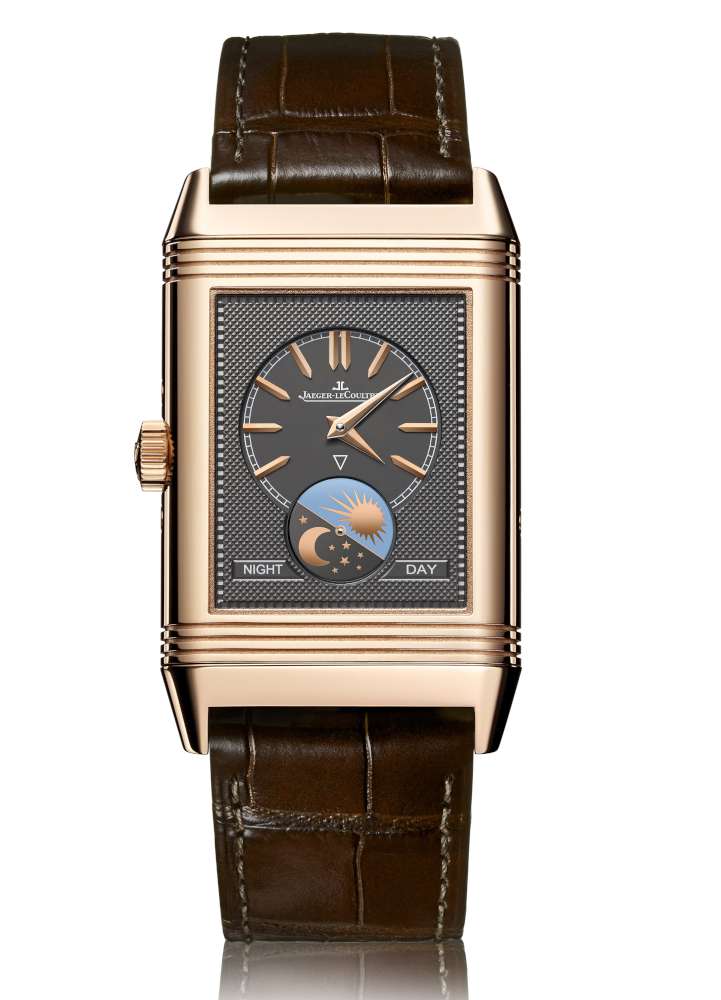 Calibre 853 has 283 components, a balance running at 21,600 vibrations per hour (3 Hertz), and 19 jewels. It is manually-wound, with a power reserve of 42 hours. It is based on the Calibre 854, introduced in the 1994 Reverso Duo, in turn derived from the Calibre 822 introduced in 1992. So it’s a basic calendar with a complete calendar module on top, and the extra time zone complication.

Like all its watches, Jaeger-LeCoultre tests the Reverso Tribute Calendar with its 1000 Hours Control programme, comprising a range of tests lasting a total of one thousand hours, The “1000 Hours Control” seal on the back shows that the watch has passed tests for precision, regularity at different temperatures and atmospheric pressures, resistance to shocks and magnetic fields, and water-resistance. The tests are performed on the movement before casing, and on the complete, assembled watch.