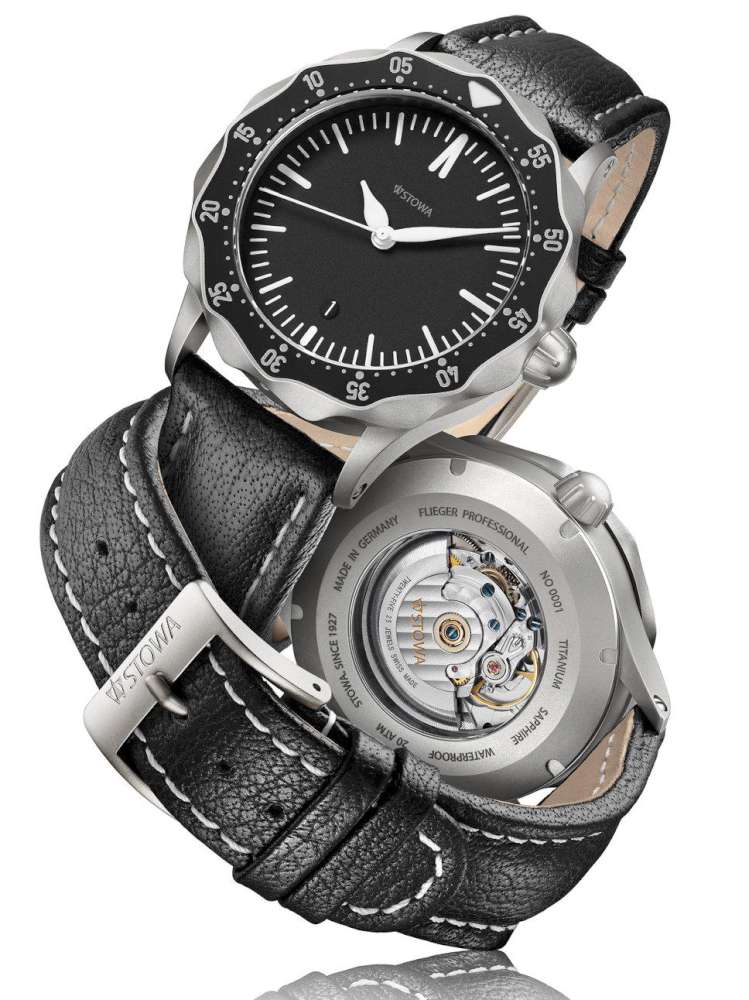 Stowa was one of the companies that made pilot’s watches for the Luftwaffe in the 1930s and ’40s, and so the brand feels a commitment and responsibility to this heritage. They make some watches that mirror the characteristics of Type A and Type B Flieger watches fairly closely, at least in terms of dial design. But Stowa are also working on bringing pilot’s watches up-to-date, with models that do not just look back to half a century ago, but also forward. Stowa was part of the work group (with Sinn and Glashütte Original) that developed the previous TESTAF standard into the new DIN 8330 standard that defines the characteristics of a contemporary pilot’s watch. The new Flieger DIN Professional is the first watch by Stowa to be made in compliance with DIN 8330. 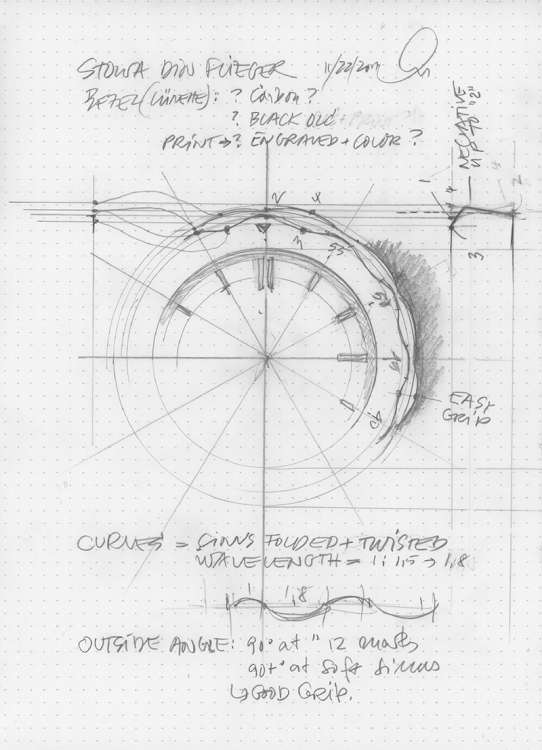 The watch was designed by Hartmut Esslinger, whose studio ‘frog design’ also worked on the Stowa Rana, one of the most innovative watches of 2015. Esslinger’s work on the watch mirrors German philosopher Odo Marquard’s dictum that “future always needs a past.” The new Stowa Flieger watch is a retro-futuristic step forward. Esslinger himself describes his approach to this design project.

“Besides modern products in new but often unexciting shapes, for example smart phones, there are objects with a history in a traditional way, like ocean liners, cars and of course pilot watches, which speak to us emotionally by their visual familiarity. Apart from that, innovation and customer’s demands require modernization and new ways of designing. In Stowa’s new Flieger watch, together with Jörg Schauer I combined a classical watch case with a bionic-shaped bezel: two spatial sine curves, combined at an angle of 90 degrees, create perfectly ergonomic shaped transitions which meet the high DIN standards concerning safe handling with gloves while capturing the avant-garde style of a Boeing Dreamliner. Moreover, the watch features an innovative dial: we replaced the classical triangle on 12 o’clock with an open A, making the minute hand close the triangle visually in its centre precisely when it hits the 60 minutes mark.” 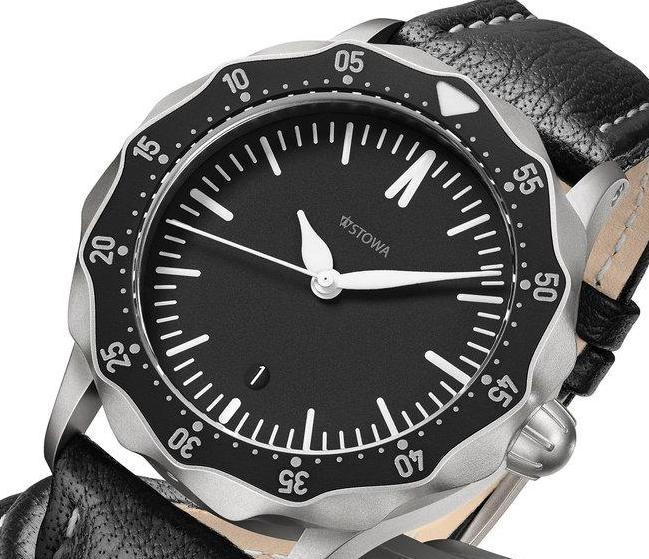 This last touch is, I think, a stroke of genius, creating the historic white triangle just once an hour. The dial is pure clarity, and you can choose whether to have the date window or not. Wouldn’t it be nice if other watch brands gave you that choice? The case is in titanium, and it’s a large watch at 46.8 mm, thickness 13.9 mm. On the wrist it has that sense of solid presence that is characteristic of the larger Flieger watches: it weighs 122 grams even though the case is in titanium. Water resistance is 20 bar, 200 metres. The bezel described by Esslinger is an interesting design concept, particularly when compared to his absolutely minimalist Stowa Rana watch. The shapes created by the two sine waves are definitely organic, as if these mathematical geometries were an inherent part of the natural world, perhaps involved in generating forms such as sunflower seed heads and shark’s teeth curves. 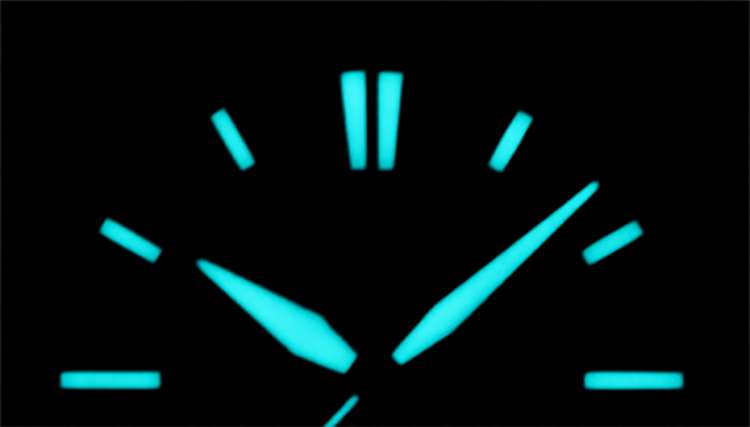 The rotating bezel can be used for countdowns with the minutes or seconds hand. Another interesting detail is the crown, more futuristic than retro.

The Stowa Flieger DIN Professional is powered by the ETA 2824-2 in its highest version, chronometer quality. 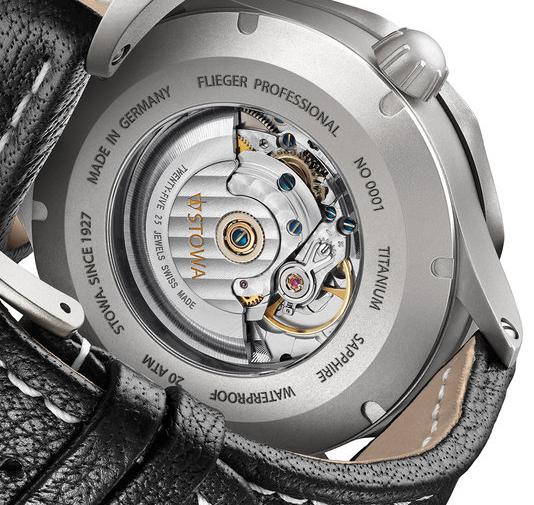 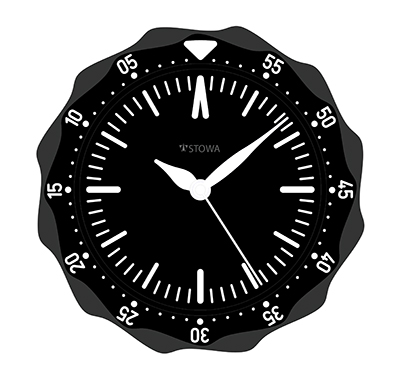