The Quai des Bergues is the first watch made by Czapek. Rhymes with Patek. The watch is unusual because it has to be wound on Sundays. An unusual requirement in today’s age of maximum personal liberty.

But let’s go back to the beginning. Why does the name Czapek ring a bell? Because Franciszek Czapek, born in 1811 in Jaroměř, now part of the Czech Republic, grew up in Poland and then emigrated to Geneva, where he founded a watchmaking company with Antoni Patek. Patek, Czapek & Cie operated for six years before the two partners went different ways, Patek going on to form what would become Patek Philippe, and Czapek finding another partner and operating as Czapek & Cie. It’s not clear when Czapek died, possibly 1869. In any case, the company continued operating for a few years but then closed down.

The Czapek marque was reborn on 21 October 2011, and from then on it has become perhaps the first example of a high-end watch brand financed in part by crowdfunding. Its first products were presented at Baselworld in March 2016, amongst which the Quai des Bergues men’s watch. 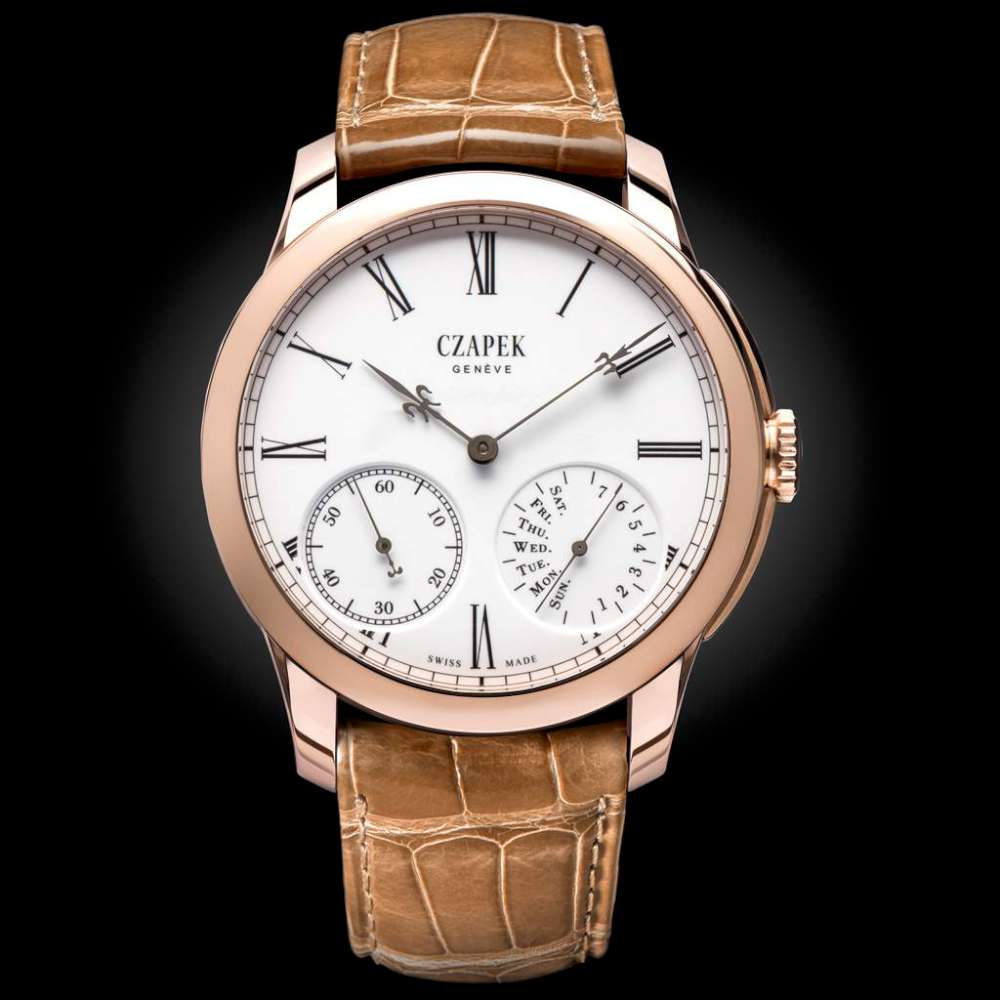 The watch is immediately distinctive for its classical dial with slender Roman numerals, and the two subdials. The one on the left is for continuous seconds, that on the right is for days of the week and power reserve. But this subdial has just one hand, so that 7 days’ power reserve corresponds to the Sunday marking on the other side. So you have to fully wind the watch on Sunday, after which you leave it running for a week. The manual movement has a power reserve of 168 hours and so it can readily cope with a week’s operation. If you put it in a drawer for a couple of weeks and want to put it back on, say on Wednesday, you have to wind it partially, stopping when the indicator reaches that day. 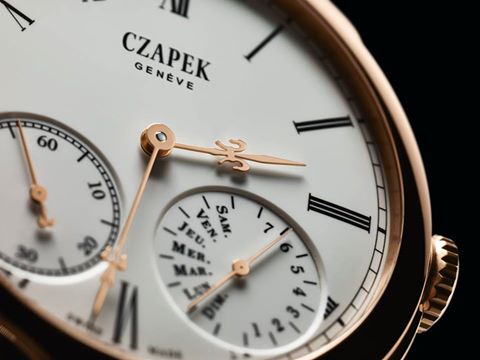 This is an unusual feature on what is otherwise a totally conventional watch. For its first creation, Czapek turned to one of François Czapek’s watches, the 3430 pocket watch made in 1850, which had exactly the same dial layout. 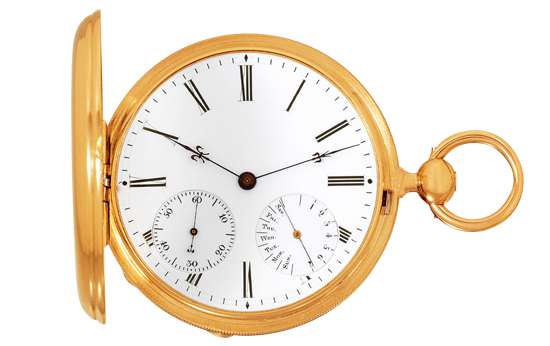 On their website, Czapek are very candid about the origins of the components that make up the watch. The movement, calibre SXH1, is made by Jean-François Mojon’s company Chronode, with two mainspring barrels providing its excellent 7-day power reserve. Its balance runs at 21,600 vibrations per hour, 3 Hertz. The movement is 32 mm in diameter and 4.75 mm thick. 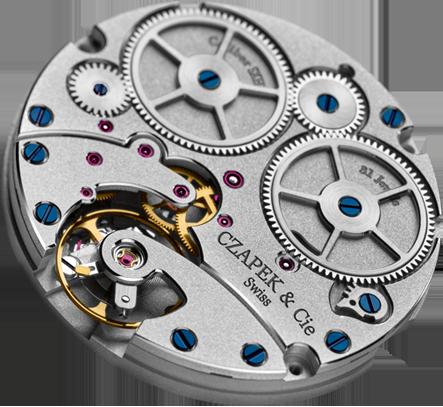 Like the complete watch, the appearance of the movement is also based on the 1850 watch, shown in the image below. 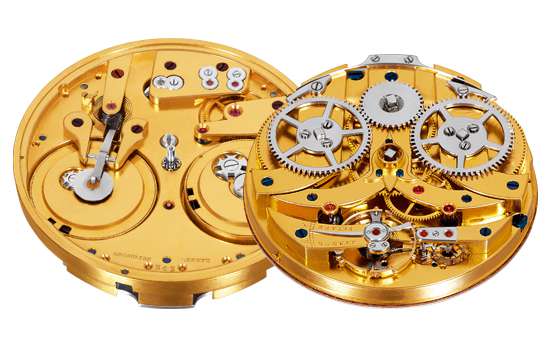 The case is made by Les Artisans Boîtiers in La Chaux-de-Fonds, the dial by Donze Cadran in Le Locle, the delicate and amazingly thin fleur-de-lys hands by H.M. Waeber S.A. in Fleurier, and the strap by Camille Fournet, La Chaux-de-Fonds. The steel used for the steel versions is a special alloy with very high resistance to corrosion, so-called XO steel made by Montanstahl, Stabio. 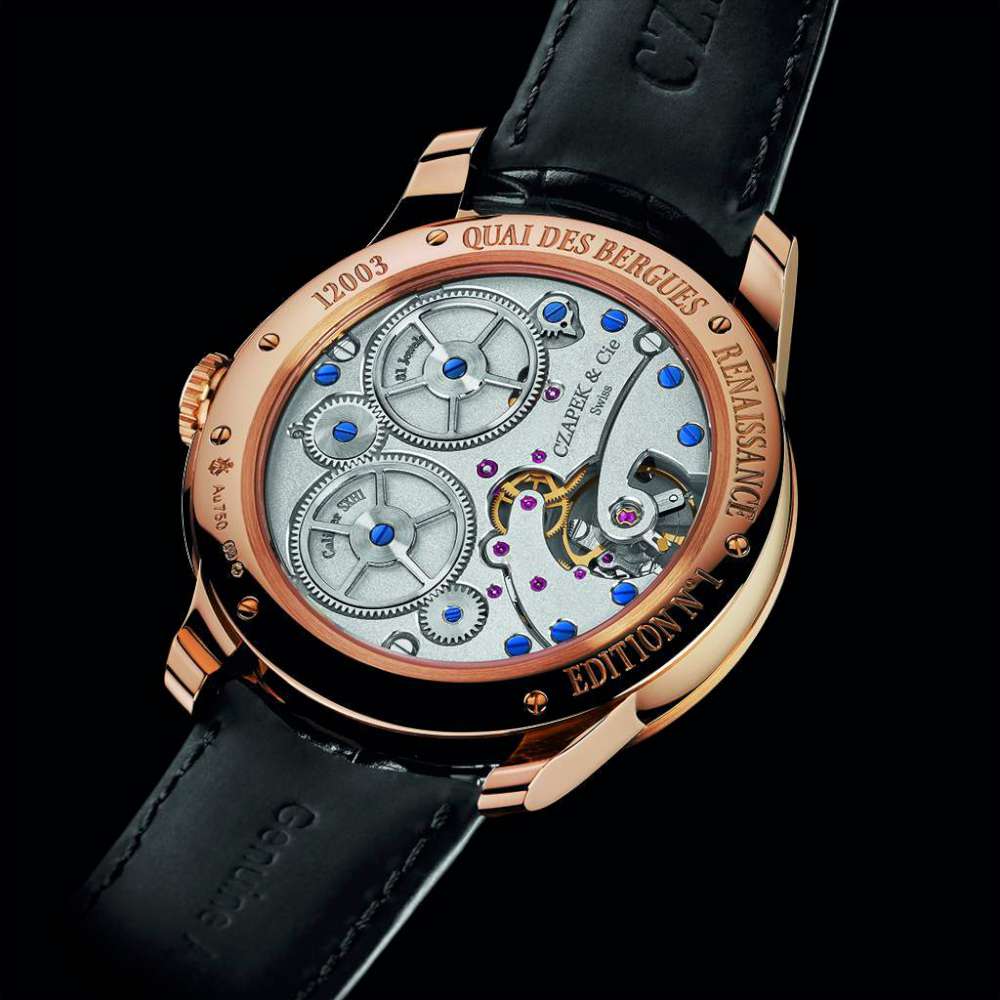 There are a total of 9 versions of the Quai des Bergues watch, in red gold, white gold, titanium or steel. They all have cases 42.5 mm in diameter, with an interesting treatment of the crown protector, resembling a circular disc inset into the caseband. The enamel dial includes a Czapek “secret signature,” and purchasers can ask for their own phrase to be added to the dial. These secret texts are visible only at certain angles of lighting. Another possible form of personalization regards the right-hand subdial, in which the days of the week can be in different languages, or – if you really don’t like the idea of the power reserve being bound to the day – they can be omitted and replaced by a more conventional power reserve arrow.

Another detail is the Golden Bee symbol that appears on the caseback. As François Czapek became watchmaker to the court of Emperor Napoleon III, he used this ancient symbol of the French monarchy, and the new brand has done the same.