The Tudor Heritage Black Bay is a diving watch that was introduced in 2012 and won the Revival Prize at the 2013 GPHG competition. In 2016 a new version of the Heritage Black Bay was presented, Tudor Heritage Black Bay Bronze, with a bronze case and the in-house movement first seen in 2015. The new version has some subtle stylistic updates: for example, the Tudor rose logo on the dial has been replaced by the shield, and there are three lines of text at 6 o’clock, providing details of the water resistance (200 metres) and the chronometer certification. 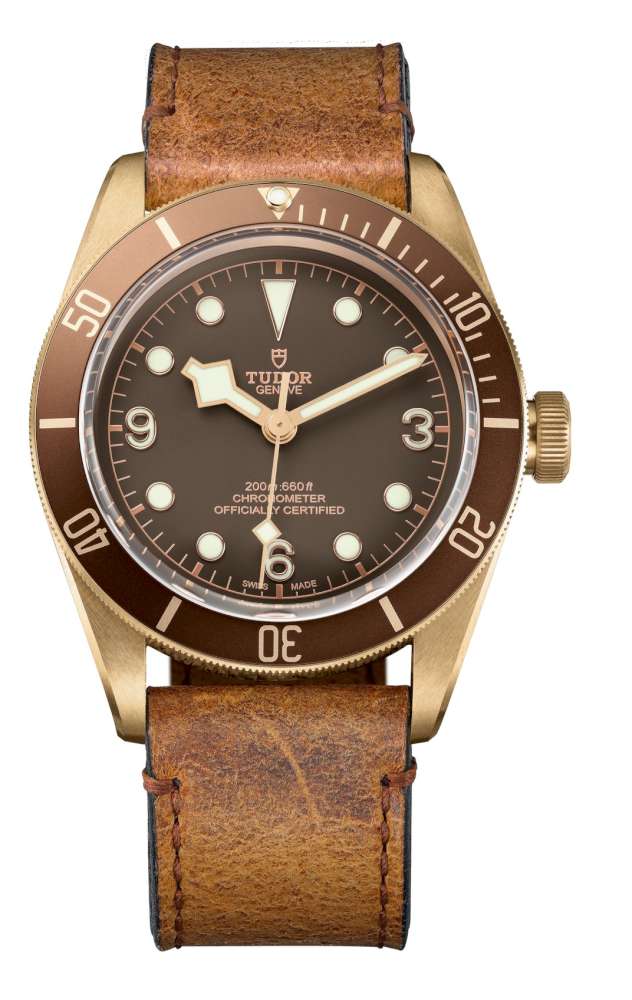 The bronze case introduces a dynamic aspect to the watch’s appearance, in that it changes over time. When you take it out of the box, it has the subtle gleam characteristic of this aluminium bronze alloy, chosen for its links to naval functions such as propellers and other underwater components, but after just a couple of weeks it starts to develop a patina caused by the atmosphere and the acids in the wearer’s skin. The way the patina develops depends entirely on the user’s lifestyle, and it eventually reaches a dark, chocolatey tone. The back of the case is in PVD-coated stainless steel, to prevent the watch from staining the skin. 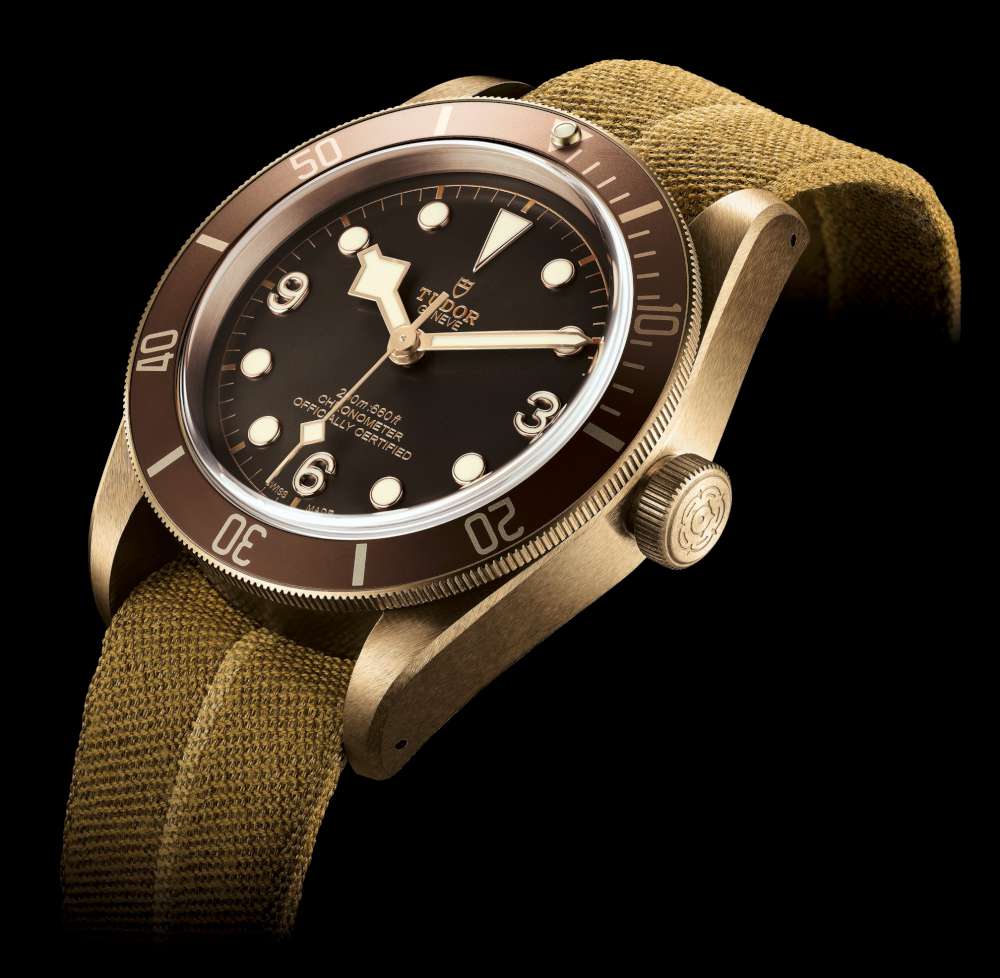 The Black Bay Bronze is slightly larger than the previous Heritage Black Bay models, 43 mm instead of 41 mm. The thickness is the same at 12 mm. The dial now has three Arabic numerals, and it retains the triangle at 12 o’clock. The lugs have a useful feature: drilled holes that enable the user to change the strap quickly and easily – a fabric strap is supplied with the watch in addition to the aged leather strap. The fabric strap looks back to 1977, when Tudor supplied watches to the French Navy. One of those historic pieces was found, and it had a strap made using parachute textile, with a thin yellow central stripe. 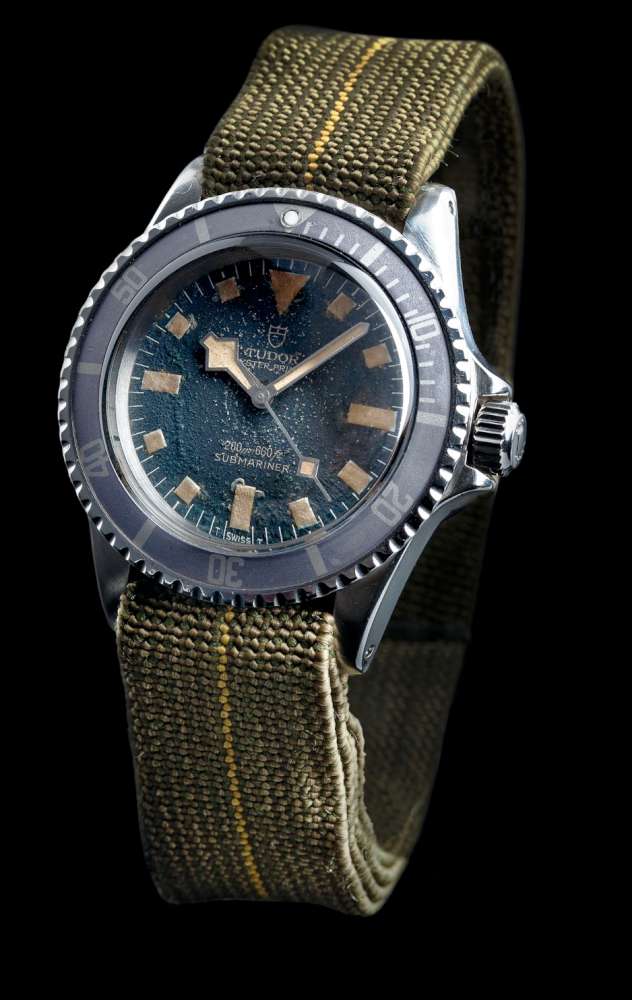 The self-winding MT5601 movement was developed from the first Tudor in-house movement (MT stands for Manufacture Tudor) presented in 2015. It is slightly larger in diameter, a perfect fit for the case, though of course you can’t see it. It offers excellent performance and precision, with a 70-hour power reserve, and COSC-certified precision (-4/+6 seconds per day max deviation). The balance runs at 28,800 vibrations per hour, 4 Hertz. The balance wheel is variable inertia; the balance spring is in silicon. 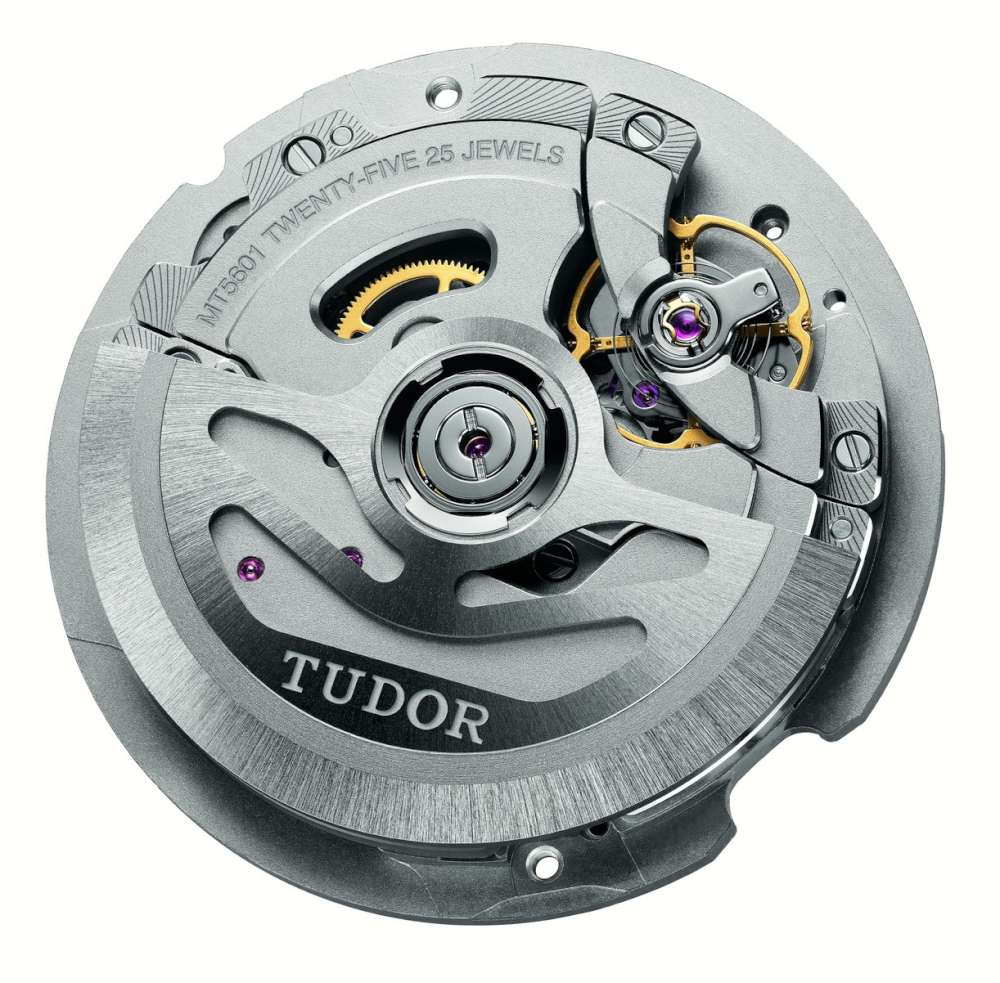 The Tudor Heritage Black Bay Bronze is the ideal everyday watch for anyone with a moderately dynamic, sporty lifestyle. The unidirectional rotating bezel is part of the diving watch heritage, but it also transforms the watch into a rudimental chronograph, capable of timing events to the nearest minute. 200 metres water resistance and the fabric strap are features that enable you to keep the watch on whatever you’re doing. The so-called “snowflake” hands and the generous areas of SuperLuminova make the watch very legible. The lack of a date window is a positive feature in my opinion. The crown is large and screw-down for easy time adjustment.