The Oris Artelier Calibre 112 features the brand’s third in-house movement following the introduction of the Calibre 110 in 2014, their first in-house movement after a break of about 35 years. Calibre 110 (named because it was introduced in the brand’s 110th anniversary year) was a time-only movement with power reserve indicator, Calibre 111 introduced the date, and the new Calibre 112 has the GMT function. Like the other two, Calibre 112 was entirely developed in-house, and assembly takes place on the company premises. Components are made by external suppliers, but, as Executive Chairman Ulrich W. Herzog has said, “Over the last two years we have invested heavily in expertise, people and infrastructure… Calibre 112 moves Oris one step closer to the process of manufacturing. We are doing more and more of the production ourselves.” The watch is magnificent, with a polished stainless steel case, an alligator strap or metal bracelet, and a narrow bezel. The looks have something of the IWC Portugieser but Oris are definitely going their own way, with very attractive results. 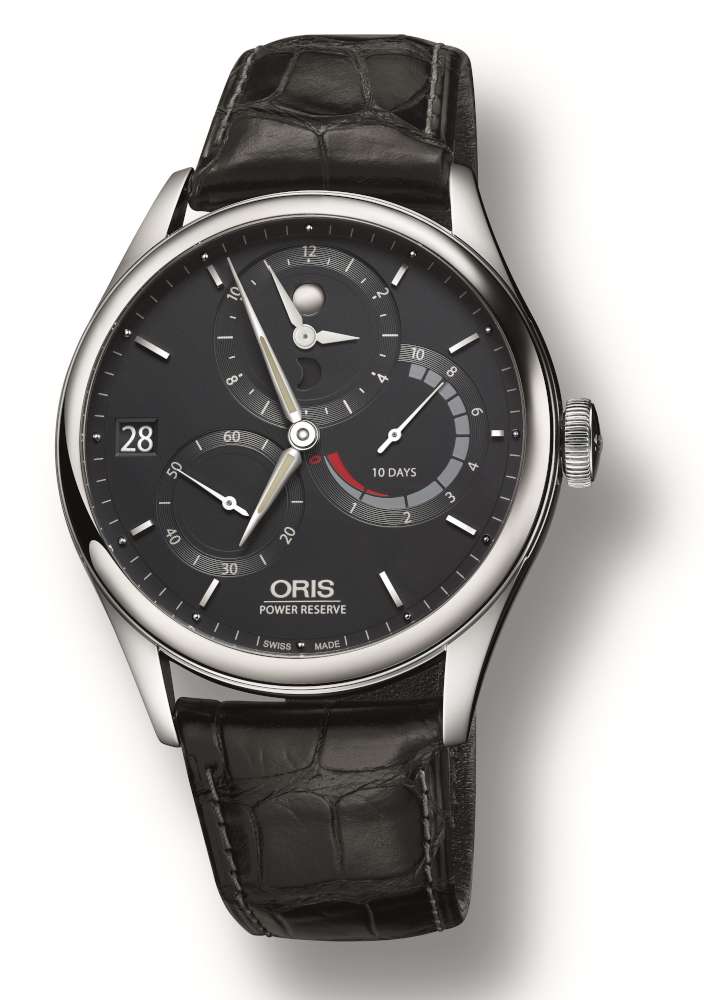 The dial is unusual and original. Framed by the 43 mm case (thickness is not specified, it looks about 10 mm), it’s fairly large but wears comfortably on the wrist. The first thing you notice is the dial layout, with an asymmetric arrangement of subdials. At the top is the second time zone (usually used for home time), with an analogue, two-hand subdial. It has two windows, a circular window above and a crescent window below. Underneath the dial is a disc with black and white areas, so that the two windows form a day/night indicator. At sunrise and sunset (I would guess 6am and 6pm), there is a gradual transition in both these windows.

The crown has several positions, with the usual position 0 for winding. Pulled out to one position, you can set the time and the GMT subdial adjusts contemporaneously. All four hands move together, which is an interesting sight. In another crown position you can adjust the GMT subdial separately. 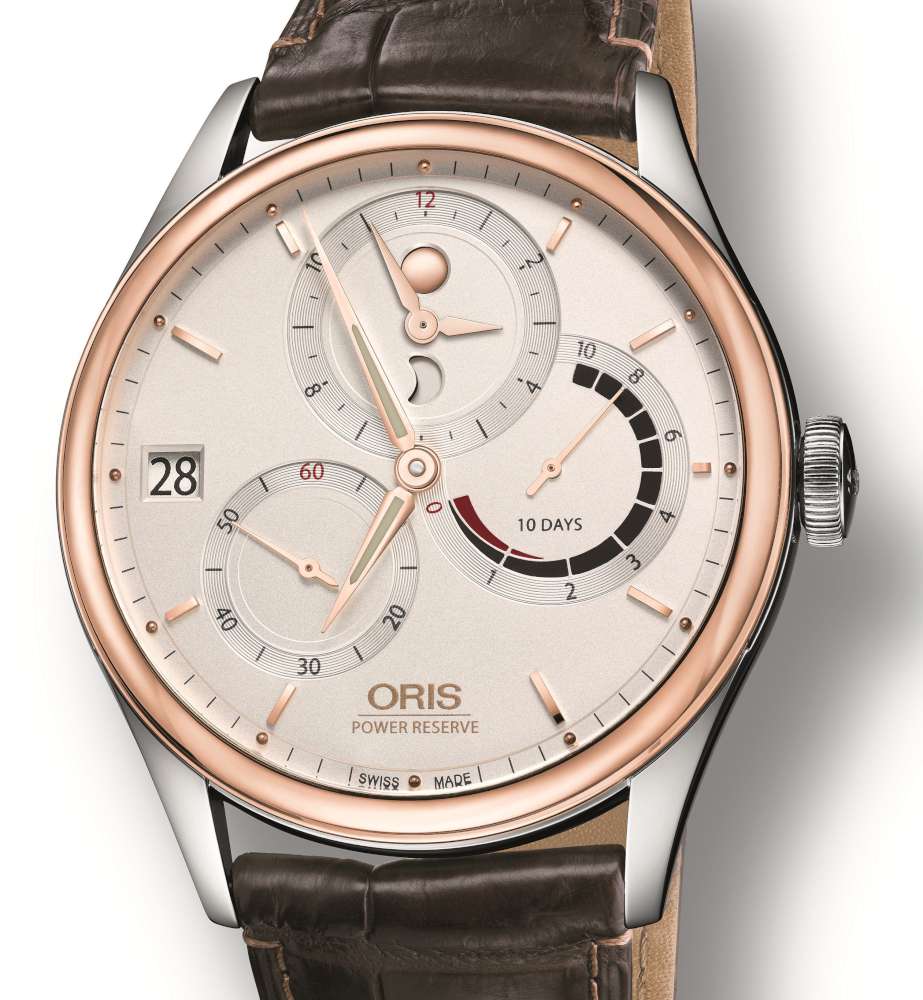 At three o’clock, there is a power reserve indicator for the 10-day power reserve. The indicator has the unusual characteristic of changing scale as the watch runs down, so that you can see the situation in extra detail as you get down to one day of power reserve left. When you turn the watch over, you see a double window in the bridge, revealing two cam-shaped gears. Their geometry determines the variable-scale power reserve indicator. The ten day’s power reserve itself is provided by a single barrel with a massive 1.8 metre spring. That takes some imagining: a mainspring as tall as I am, wrapped into a barrel just a couple of centimetres across! Exceptional, considering that Glashütte Original’s new Calibre 36 has a new Nivarox mainspring whose length has been increased to 68 cm, providing a 100-hour power reserve. Oris’s Calibre 112 has three times as much mainspring and four times as much power reserve. It would be interesting to find out how the Oris Calibre 112 performs as regards precision over the span of the ten days – its isochronicity. Oris say that the calibre has been engineered so that the power is released evenly over the 10-day period.

At bottom left of the dial, there is a subdial for continuous seconds, and just above this, at 9 o’clock, a date window. Oris have maximized the size of the date numerals for the best possible clarity. It’s in the opposite position with respect to most watches, and so most of the time the date is hidden under your cuff. Power reserve has pride of place. This is a nice touch, particularly as it’s a hand-wound watch. 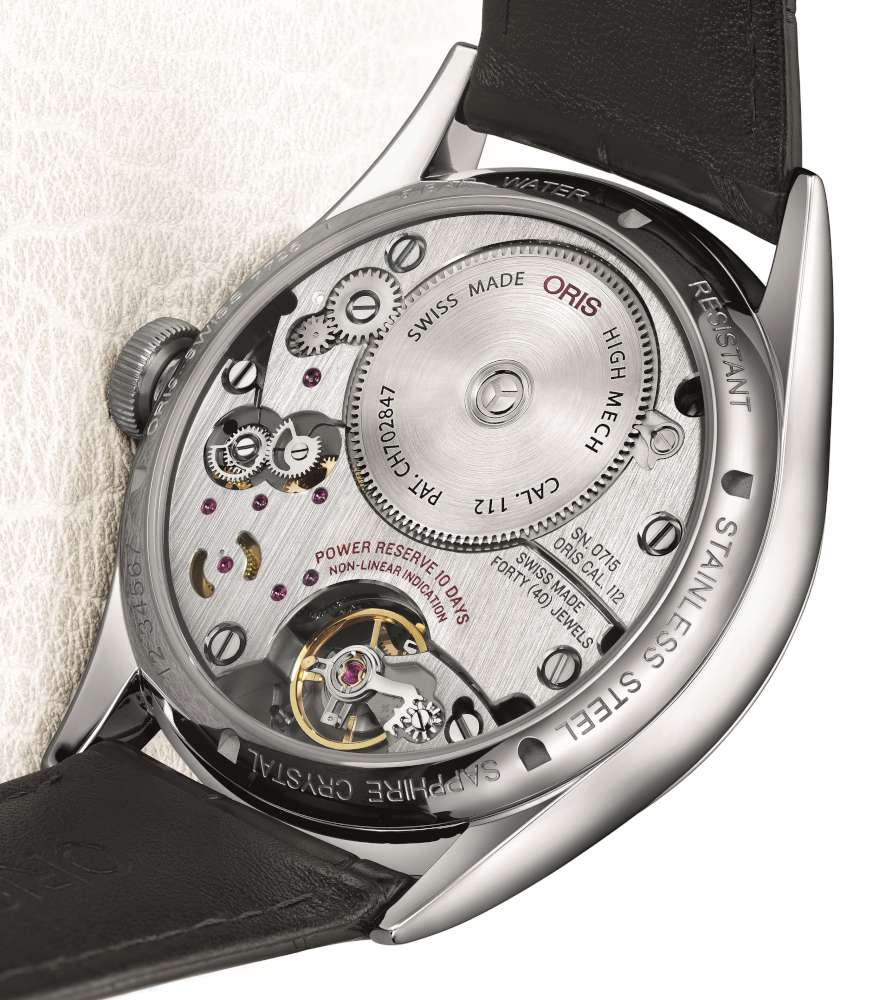 Turn the watch over, and you see the Calibre 112 in all its beauty. The movement is of course a perfect fit for the case and so it’s a truly lovely sight. At the bottom, the balance is surprisingly small, considering that the movement runs at 21,600 vibrations per hour, 3 Hertz. The balance is fitted with a regulator of original design, in which a tooth wheel engages with teeth on one side of an L-shaped lever. The other visible features are the two power reserve cam-shaped gears already mentioned, and the large barrel with two of the gears in the winding train. The mainspring requires a lot of winding, but it’s a pleasurable task, with the crown comfortable to use, and the winding feeling silky smooth. Ten days is the declared power reserve: in actual fact, it’s closer to eleven days. The power reserve indicator is built so that when it reaches zero, it stays there while the watch continues to run on its last few millijoules of energy. 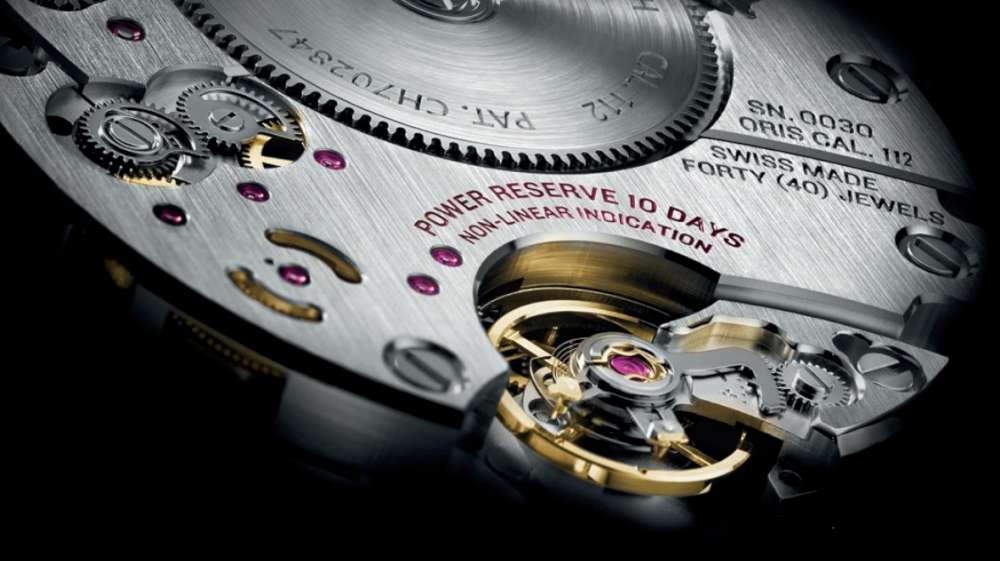 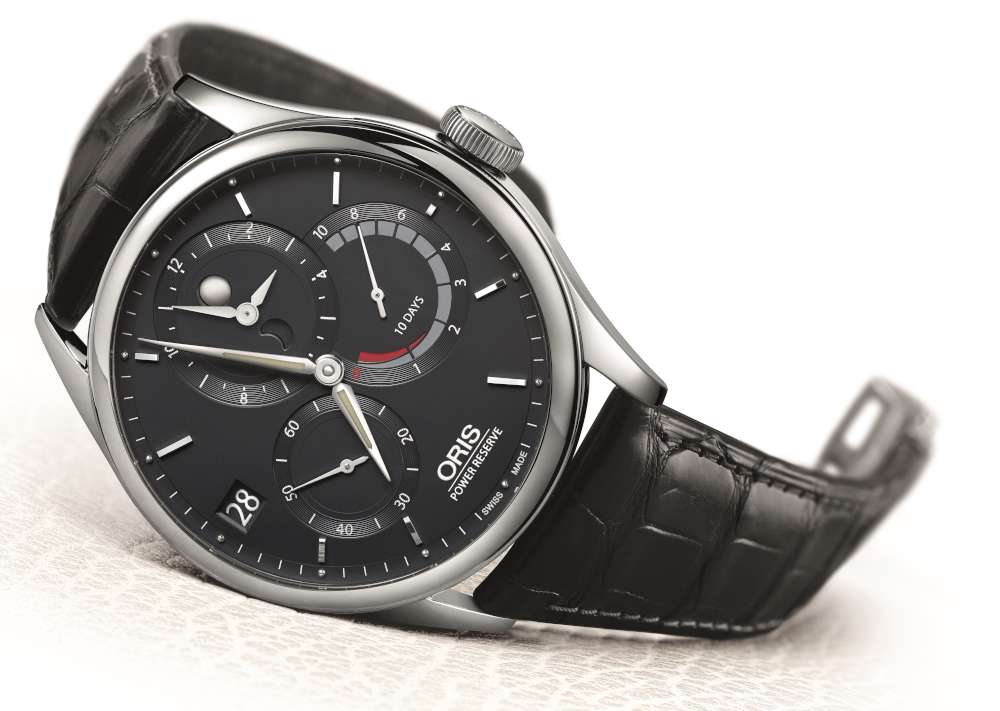