The Royal Oak is a true legend in watchmaking, from its design – created by Gérald Genta in one night (the story goes), inspired by an old-fashioned diving helmet attached to a diving suit with screws – to its name, taken from a series of eight Royal Navy warships, in turn named after an old oak tree with a hollow trunk in which King Charles II hid to escape the Roundheads in 1651, during the Civil War. The Royal Oak watch was first presented in 1972, and it was totally different to anything seen previously, in stainless steel finished to very high levels, and with a very high price tag, 3,300 Swiss francs, more than some Patek Philippe gold watches and about ten times the price of a Rolex Submariner. The basic shape, octagonal bezel with exposed screws, tapisserie guilloché dial, and beautifully engineered integrated bracelet, has remained virtually the same ever since. 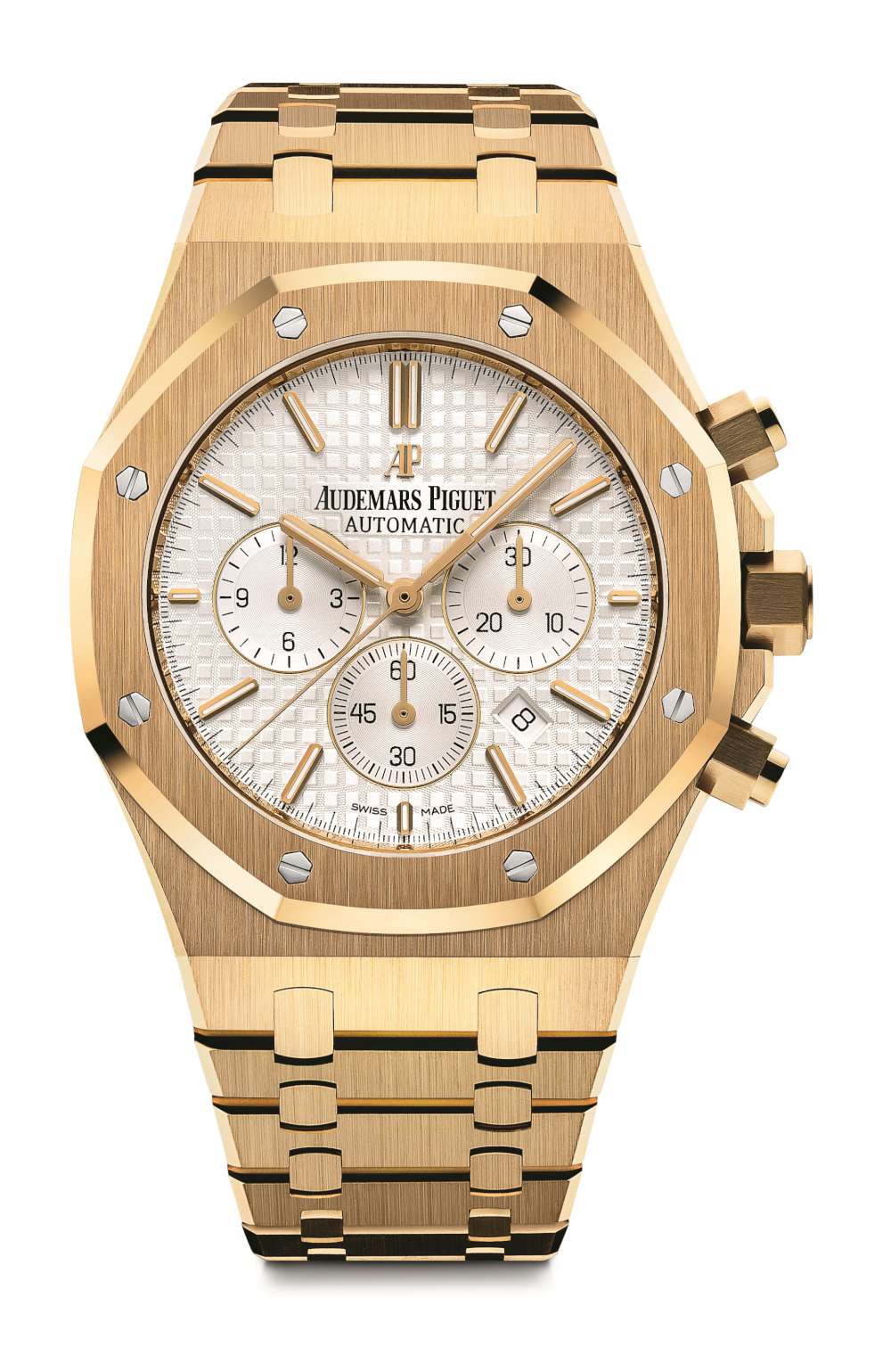 Audemars Piguet sprang another surprise at the SIHH watch show in January 2016, presenting a new series of Royal Oak watches in yellow gold. This colour of gold is unequivocally lavish, because it’s the colour of ingots. It doesn’t have the sophistication of pink gold, or the ambiguity of white gold that could be passed off as stainless steel if necessary. It speaks of exhibited wealth. In these watches, it is crafted to perfection, with contrasts between brushed and bright areas, and super-sharp edges. It is dramatically good-looking. It’s a courageous move on the part of Audemars Piguet, who banked on the return of yellow gold, popular in watchmaking in the 1970s, but more recently eclipsed by the other colours.

The Audemars Piguet Royal Oak Chronograph is reference 26320BA, a 41 mm watch with distinctive octagonal screw-down crown and pushers. It is slim at 10 mm. Water resistance is 50 metres. On the dial, hands and hour markers are in yellow gold, with luminescent paint. The tapisserie guilloché is superb, tiny relief squares against a backdrop of tiny machined circles. 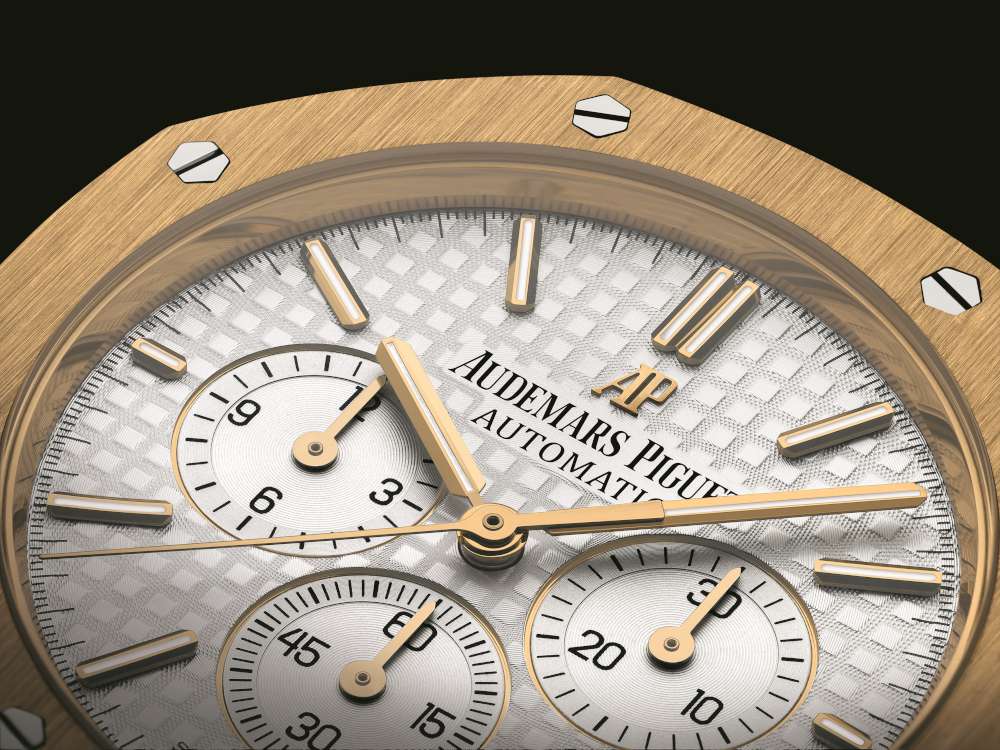 The watch is powered by the Audemars Piguet calibre 2385, which is a movement with a long history. It was introduced by Frédéric Piguet in 1988, as calibre 1185. It runs at 21,600 vibrations per hour (3 Hertz), with a power reserve of 40 hours. It has a crown wheel and a vertical clutch, and so offers a lot of added value when compared to horizontal-clutch movements. More specifically, the chronograph can be left running indefinitely without any risk of undue wear or reduced precision.

Audemars Piguet, Frédéric Piguet? This is getting confusing, particularly as they are both based in the same location, Le Brassus. Louis Elisée Piguet, founder of Frédéric Piguet, studied as apprentice to Henri Golay in Geneva, and returned to Le Brassus in 1859 where he began working with his brother Henri, designing movements for Louis Audemars (co-founder of Audemars Piguet). Then for a number of years they worked with Ami LeCoultre producing finished watches until 1877. Louis Elisée Piguet began making specialist movements for Audemars Piguet from 1891. By 1930 they were making about 740 very complicated movements per year. The company passed down from father to son, and at a certain stage took the name of Frédéric Piguet. In 1982, Jacques Piguet purchased the brand name Blancpain with Jean-Claude Biver, and so naturally, Frédéric Piguet movements were used in Blancpain’s watches from the start. In 1992 the company was acquired by Swatch Group, and in 2010 Frédéric Piguet became part of Blancpain’s movement-manufacturing division. The Frédéric Piguet 1185 is very thin, 5.5 mm, which enables the case thickness to be limited to 10 mm. So all in all, it’s an unusual situation, with Swatch Group selling this movement to a company outside Swatch Group. The Frédéric Piguet 1185 is used by Vacheron Constantin in their Overseas watches, and by a number of other brands as well. 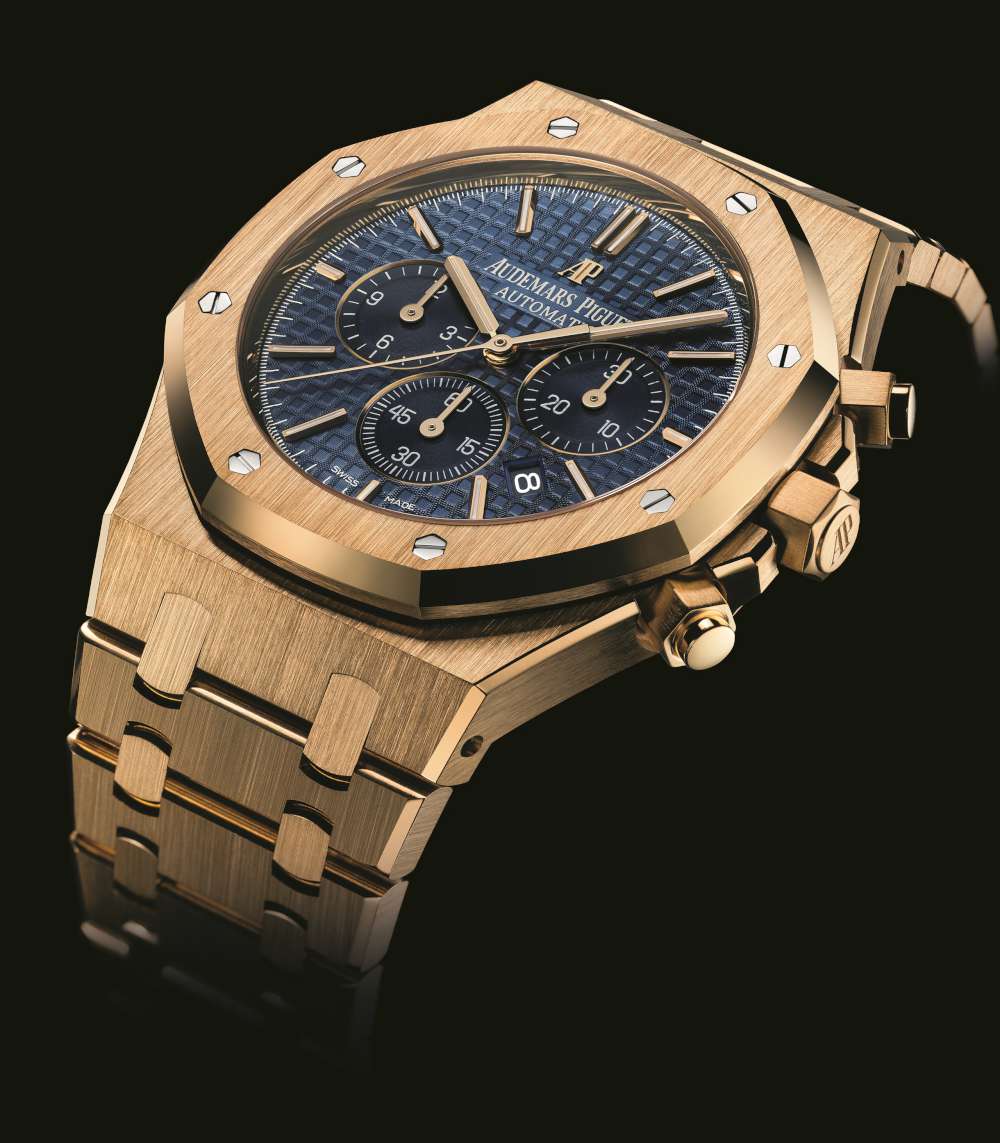 All this means that the Audemars Piguet Royal Oak Chronograph doesn’t have an in-house movement, even though Audemars Piguet is a totally vertically-integrated company and makes many of its own calibres. But then again, the Frédéric Piguet 1185 is a superb movement, slim, vertical clutch, providing excellent feel on the pushers.