1858, because in 2007, the Richemont Group purchased Minerva and assigned it to Montblanc. Minerva is a historical brand founded in 1858, and it developed a reputation for fine movements and in particular for chronographs. The 1858 collection was presented in October 2015 with two timepieces with a distinctly early pilot’s watch appearance, based on Minerva’s military chronographs dating back to the 1930s. Three new watches have been added to the collection, and they will be available in boutiques from April 2017. They all feature a combination of steel and bronze, and they represent the first time that Montblanc has used bronze in its watches. The alloy that they have adopted develops a unique patina over the years, reflecting the way that the owner uses the watch.

The Montblanc 1858 Automatic has all the looks of a vintage military watch, with deep black dial, cathedral-shaped hands, Arabic numerals, and beige SuperLuminova that enhances the period feel as well as ensuring readability in low light conditions. The case is 44 mm in diameter, 11.8 mm thick, in stainless steel, with bronze bezel and crown. The crown in particular has a distinctive design, with the modern Montblanc logo. The original Montblanc logo appears on the dial, with the Mont Blanc emblem and the name Montblanc in the historical font. 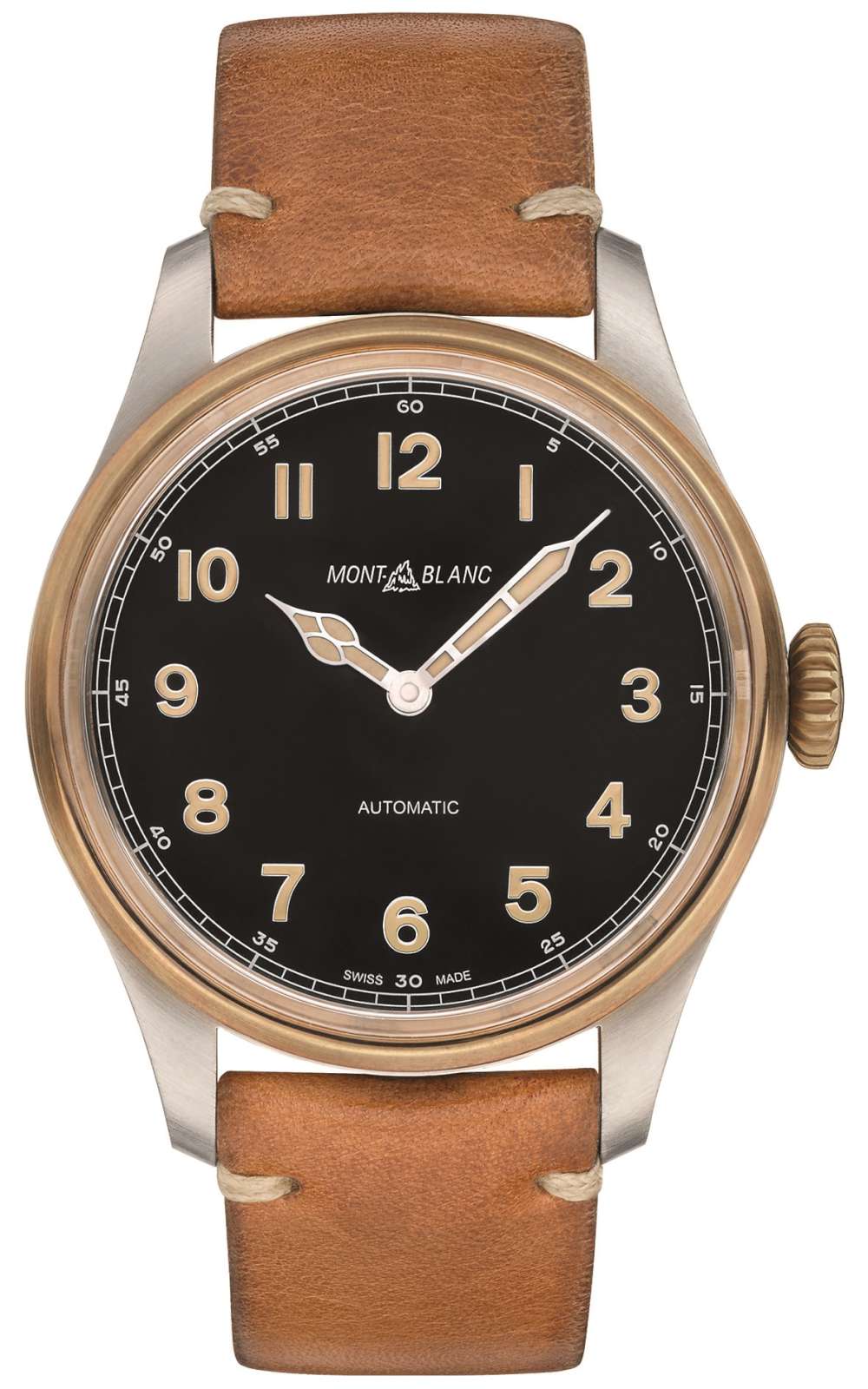 The caseback is solid, with an engraving of the Minerva Manufacture in Villeret. Inside, the watch is powered by the Calibre MB 24.16, an automatic movement that is in fact the Sellita SW260-1, providing 38 hours power reserve and running at 28,800 vibrations per hour, 4 Hertz. The watch has a cognac-coloured calfskin strap with beige stitching and a vintage look. It is made by Montblanc’s leather factory in Florence, Montblanc Pelletteria. 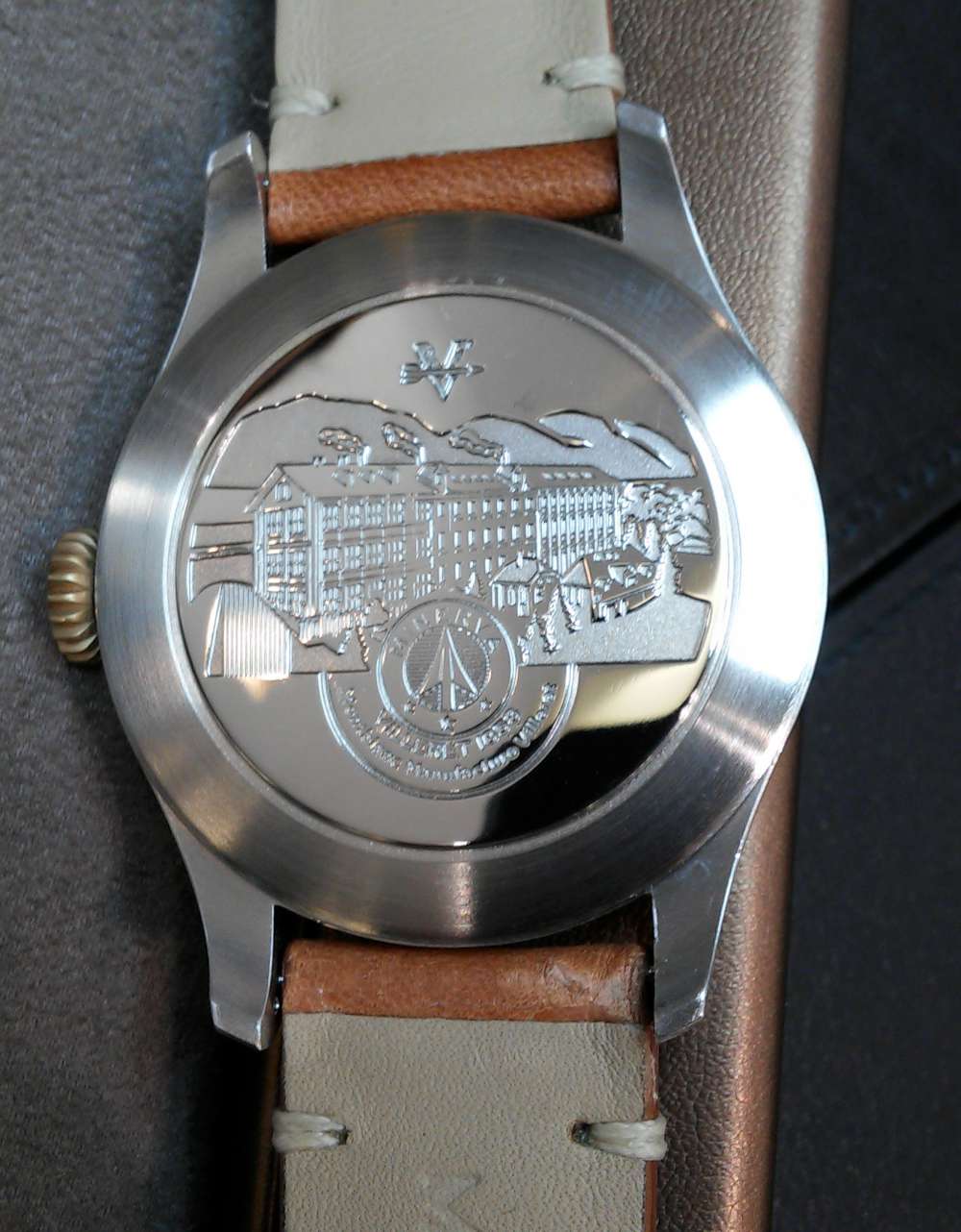 The Montblanc 1858 Automatic is reference 116241, price €3,490, $3,490. It’s an aggressive price point that puts the watch directly into competition with IWC Schaffhausen (another Richemont brand) and Longines. Available from April 2017.

Watches are made by people, and recently at Montblanc, things have changed quite a lot as regards people. In late 2015, Jérôme Lambert, then CEO at Montblanc, created a new watch division headed by Davide Cerrato, known in the industry for guiding the new course of Tudor. In November 2016, the Richemont Group radically revised their executive structure, with new managers for watchmaking. Johann Rupert, Chairman of Richemont, basically decided to abolish the Richemont Group CEO position, a role that had been occupied by Richard Lepeu for many years. Two people were in everybody’s thoughts as regards Lepeu’s replacement: Georges Kern, currently CEO of IWC, and Jérôme Lambert, whose career includes a lot of watches, at A. Lange & Söhne from 1998 to 2002, then CEO at Jaeger-LeCoultre from 2002 to 2013, then at Montblanc up until now. In actual fact, Kern will become head of watchmaking, marketing and digital for all brands, while Lambert will be “head of operations responsible for central and regional services and all Maisons other than jewellery and watchmaking.” So Kern will coordinate the work of Richemont Group’s watch brands, except for Cartier and Van Cleef & Arpels which look after themselves, and Jérôme Lambert will coordinate the fashion and lifestyle brands Lancel, Alfred Dunhill, Chloé, Azzedine Alaïa, Shanghai Tang etc… and Montblanc, which fits into the “non watchmaking brands” by virtue of its leather products and writing instruments. The transition should end in April 2017.