Watch fair SIHH in Geneva is approaching – it starts on 16 January – and some of the exhibiting brands have presented their previews. Greubel Forsey’s big news is the Greubel Forsey Grande Sonnerie. They’ve been working on it for eleven years in total secrecy, and the result is a watch with 935 parts, in a relatively compact format, 43.5 mm in diameter and 16.13 mm thick, albeit with the occasional bulges in the case that are a trademark of designs by Robert Greubel and Stephen Forsey. 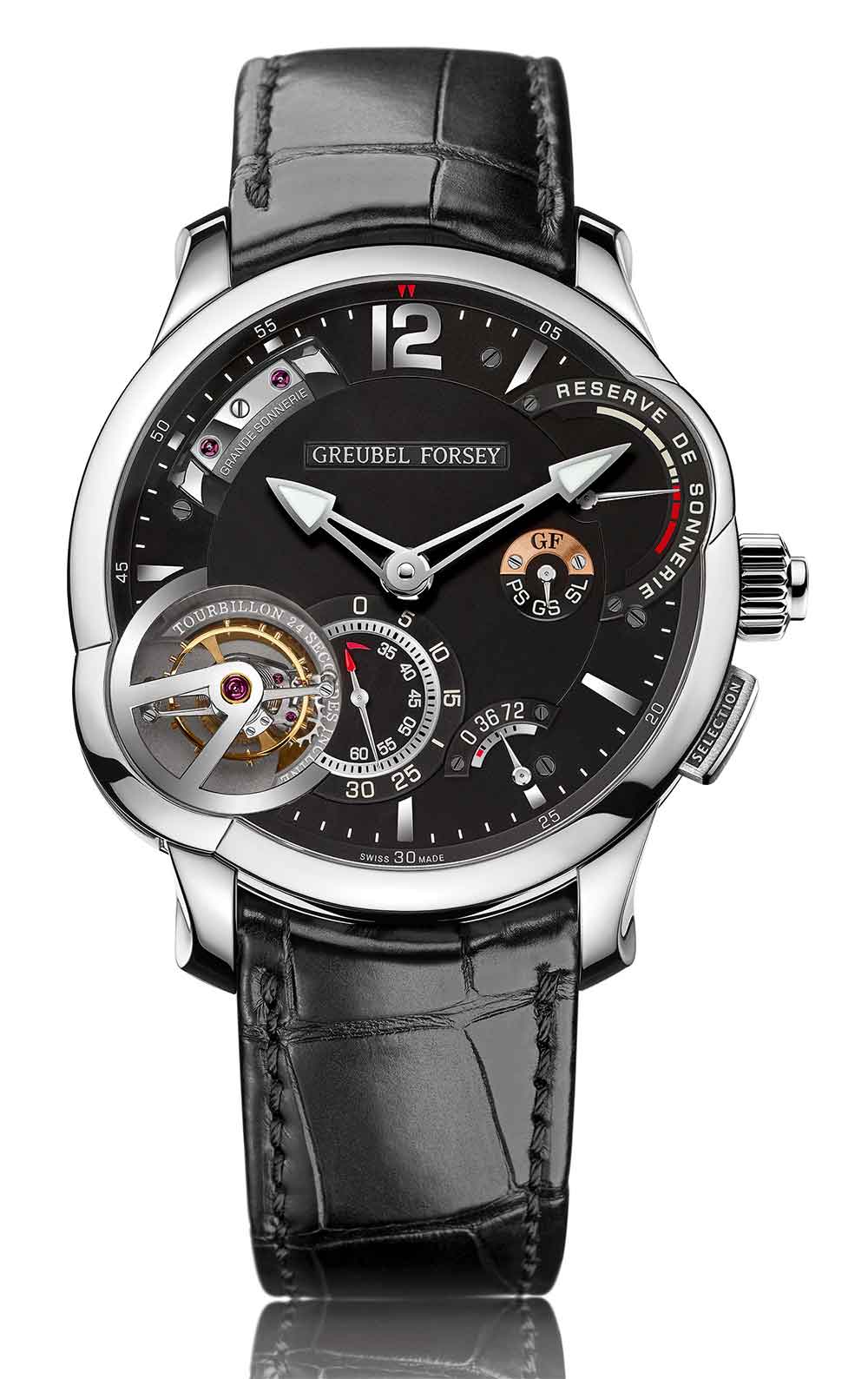 A striking watch is probably the most difficult complication of all, because there’s so much to get right, and so much that can go wrong. What happens if you try to change the time while the watch is chiming the time? What happens if the spring providing the power for the chimes runs out of energy while it’s chiming? Apart from the difficulties involved in getting a watch to chime hours, quarters and minutes on demand, and to chime the hours and quarters automatically, or just the hours, or to keep quiet, there is also the greatest problem of all: getting the sound out from inside the case, while ensuring a degree of water resistance. This watch is rated at 3 atm, 30 metres, which is the standard for just about all watches.

Greubel Forsey say that this watch has “powerful acoustics,” with an acoustic resonance cage made in titanium. Sound quality is really the primary requisite for a chiming watch, and some brands have made remarkable progress in this area – for example, Audemars Piguet and Bulgari – inventing ways of allowing the sound to resonate, transforming the watch into almost a musical instrument. Other brands make chiming watches that are, to tell the truth, painfully quiet. So, what does it actually sound like? At the presentation at SIHH in January 2017, the Greubel Forsey assistants demonstrated the watch, but did not allow any videos or recordings. Let’s just say that this piece is one of the quiet ones. To hear it, you have to be close.

There are many interesting innovations – and two patents – in the Greubel Forsey Grande Sonnerie. The mainspring is manually-wound, but the spring for the striking mechanism has a self-winding system that provides about 20 hours of power reserve in Grande Sonnerie mode (automatically striking the hours and quarters). 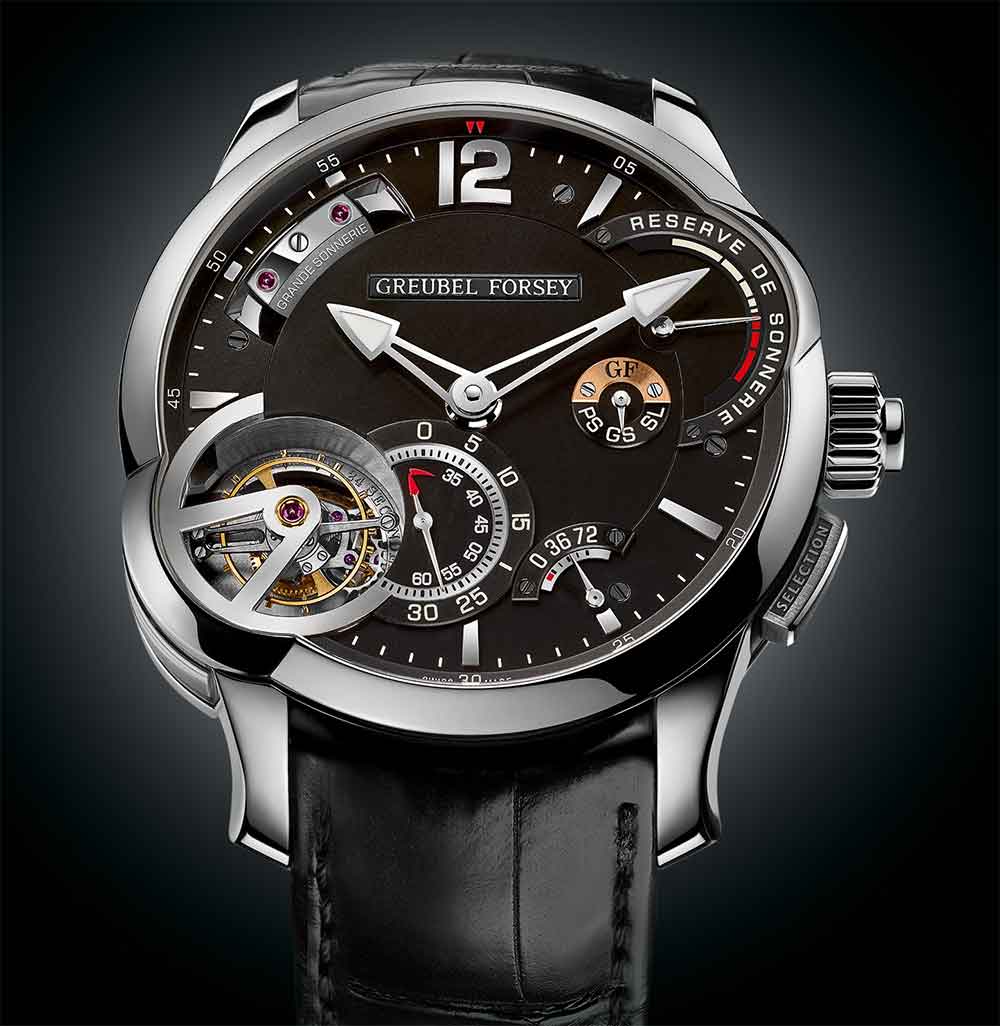 Quick guided tour of the dial. At bottom left, Greubel Forsey’s patented 24-second tourbillon, with a balance that runs at 21,600 vibrations per hour, 3 Hertz. Next to this, continuous seconds, shown with a double-ended hand. Next to this, the small power reserve indicator for the mainspring, with its maximum of 72 hours. At top left, there is a window revealing the two striking hammers, one for each note. At about 2 o’clock, there is the large power reserve indicator for the striking mechanism. To the left, the function indicator, with three indications, PS (Petite Sonnerie, in which the watch strikes just the hours), GS (Grande Sonnerie) and SL (Silent). Function is chosen by means of the pusher at four o’clock. The tourbillon can be seen from above, but not through the caseback. However there is a window on the side of the case that admits light to enhance the tourbillon, and this window also provides a view of the cathedral gongs. The crown is in white gold, and it includes a pusher used for striking the time on demand. 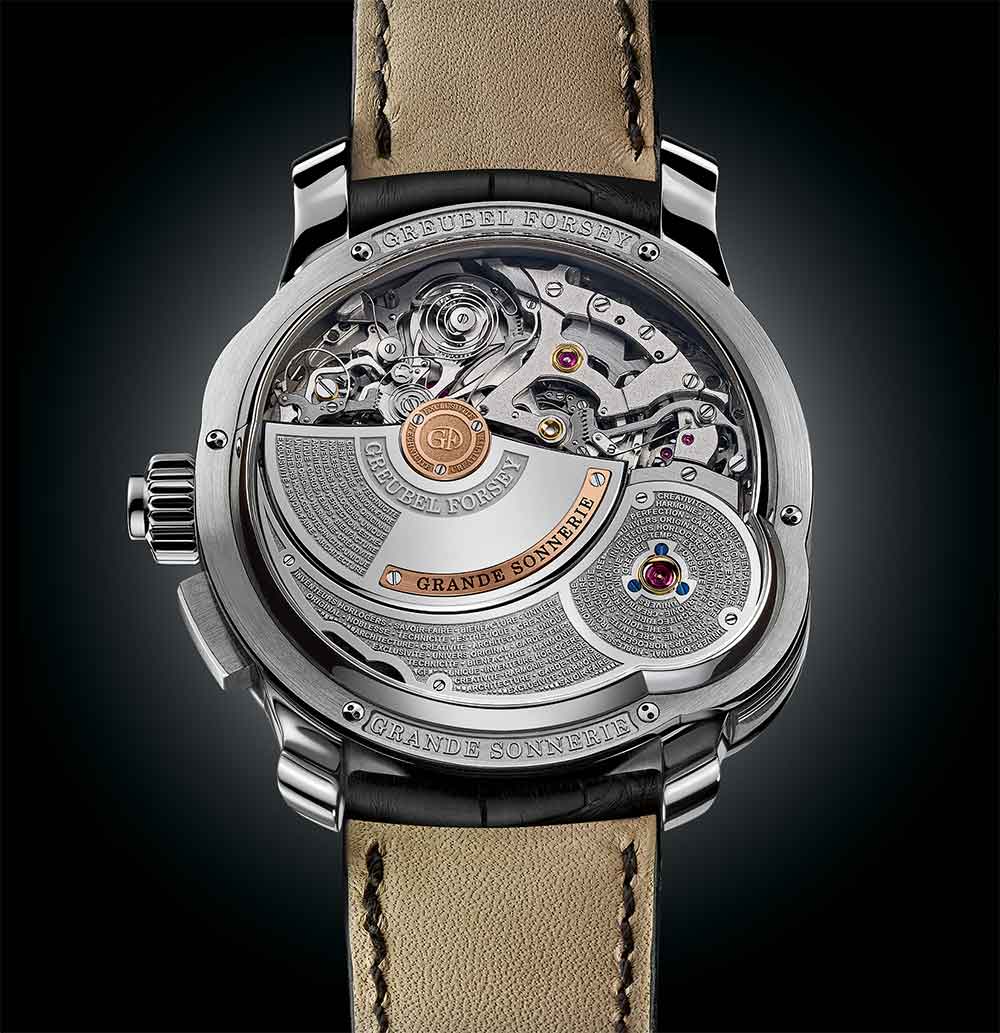 The striking is optimized, so that if there are no quarters to sound (for example, five minutes past ten), the watch sounds the hours and then, straight after, the minutes. The system is protected by eleven security features, that cover the situations mentioned above, for example time setting while the watch is striking.

Beauty through the caseback

The caseback shows a beautiful view of the movement. In particular, the bridges and oscillating weight in the lower section have an intricate finish based on words in relief, rather than the usual Côtes de Genève. The case is in titanium to optimize sound transmission. The lugs look interesting, described as “three-dimensional variable geometry.” 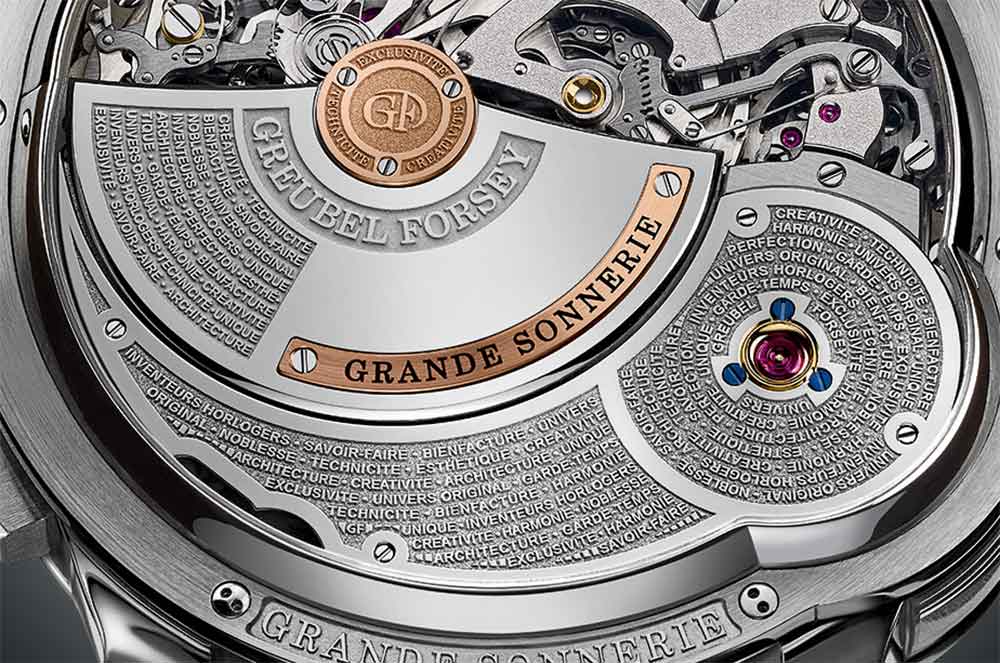 The watch will cost 1,150,000 Swiss francs plus VAT. At the moment there is no indication of when it will be available in boutiques. From five to eight of these watches will be made every year. More at the Greubel Forsey website. 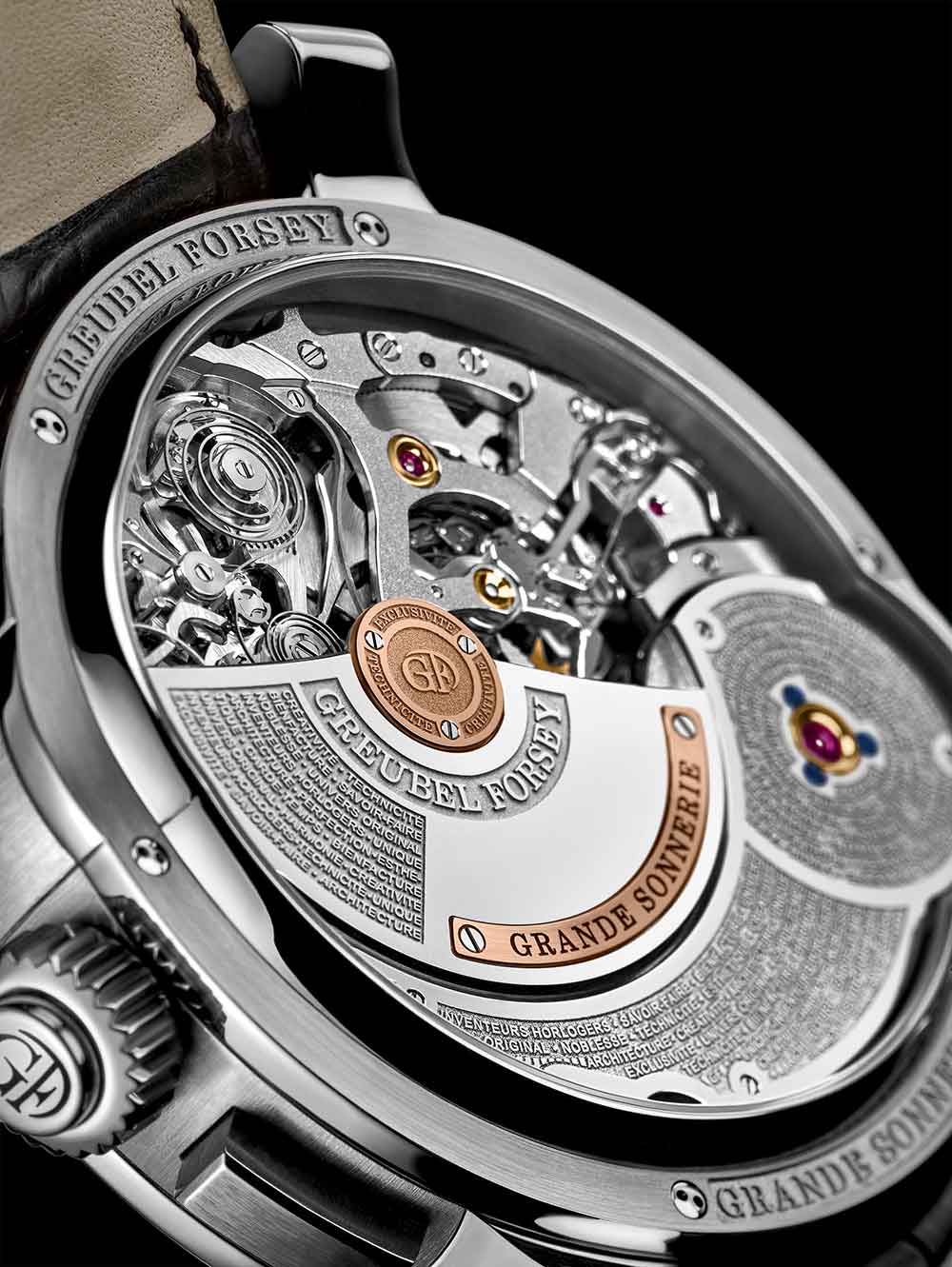