MB&F continue to make some of the most original machines out there. Their latest, HM7 (the HM stands for horological machine) is inspired by the underwater world, after their explorations of space, the air, and the road. HM7 has a profile that recalls a jellyfish, but there are lots of other visual links, such as the external unidirectional rotating bezel that resembles a lifebuoy as well as the bezel on a diver’s watch, and the rotating weight underneath that suggests an anemone or the tentacles of some other marine animal. 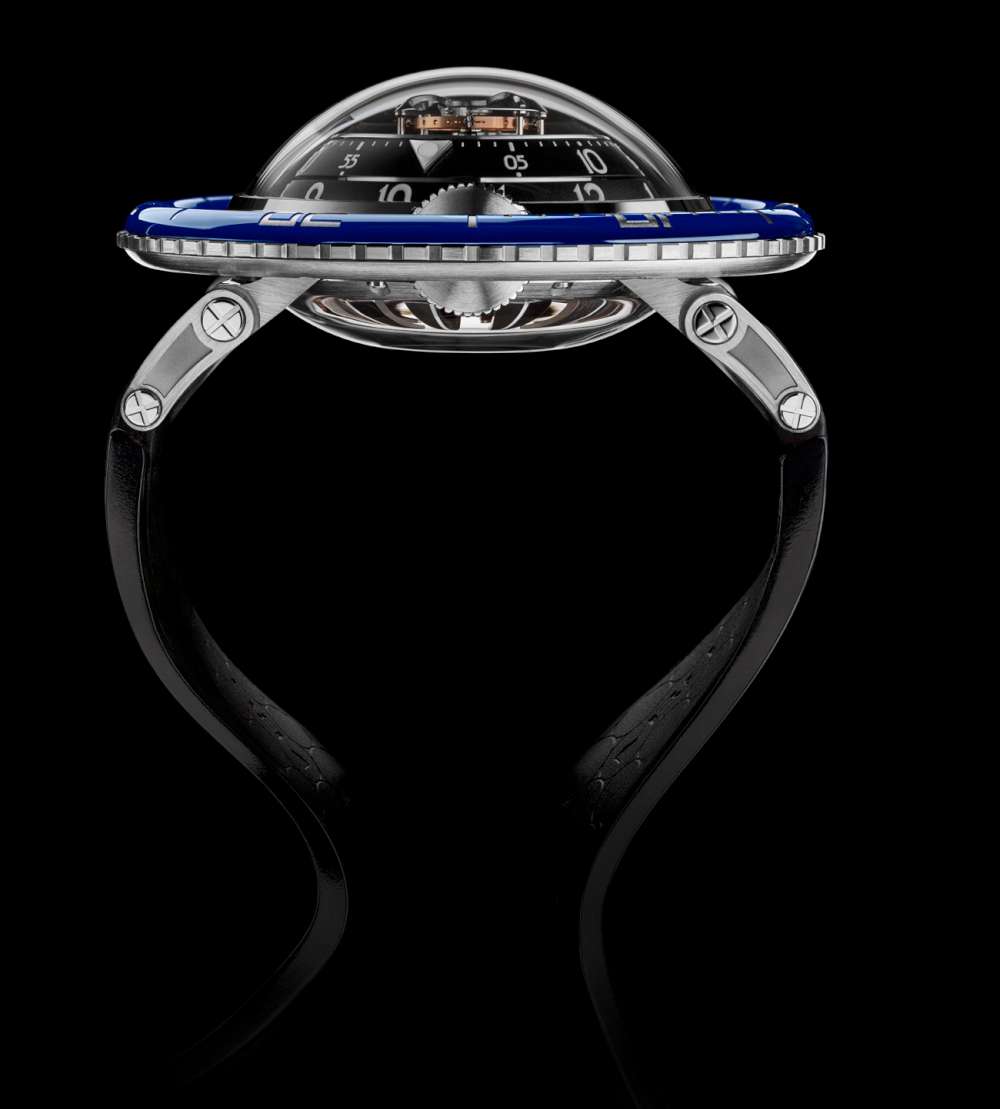 In low light conditions, the luminescent markings both on the time indications and underneath evoke a Jules Verne-type steampunk submarine exploring the underwater world. The basic concept is by Maximilian Büsser, with design by Eric Giroud, and development took a number of years, which is why HM7 was presented in January 2017, after the appearance of HM8 last year. 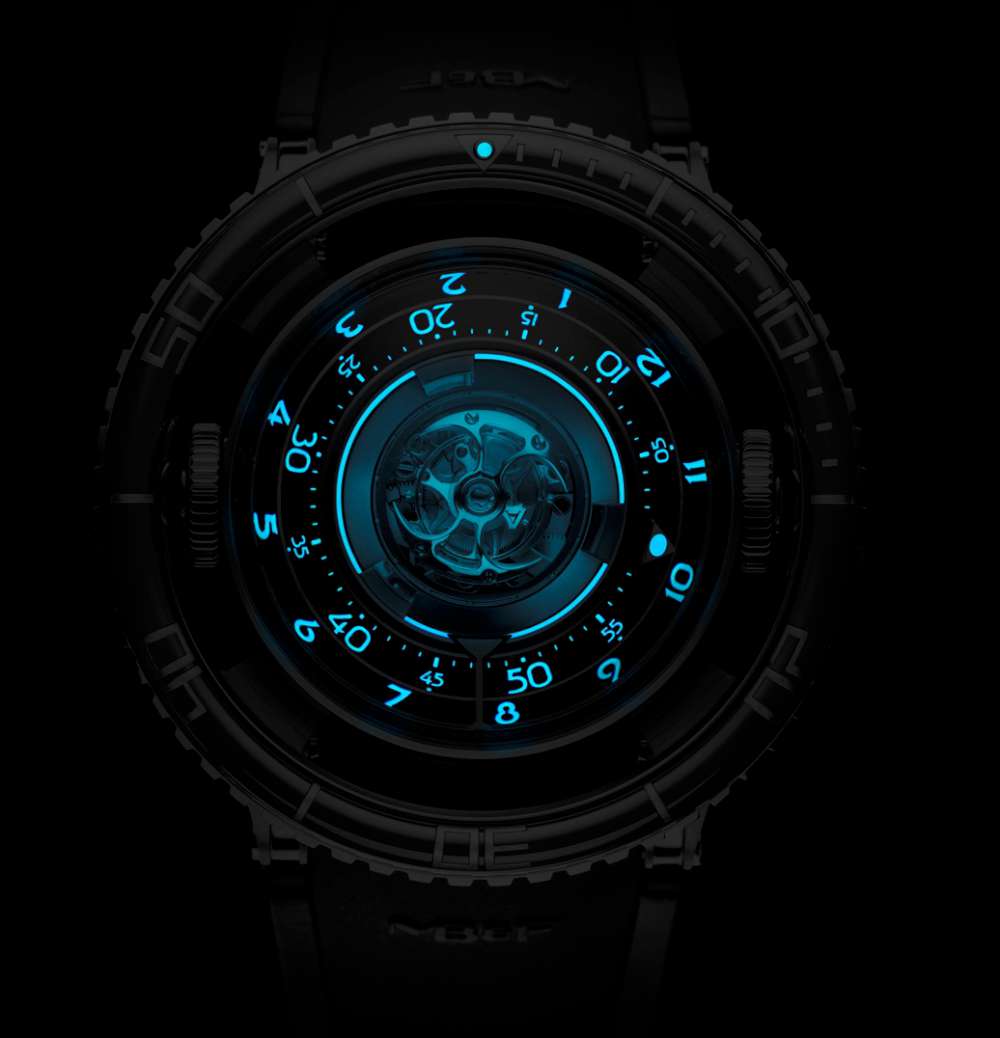 But, even though the rotating bezel suggests the contrary, it’s not a diving watch. I asked the MB&F Head of Communications, Charris Yadigaroglou, whether they had considered giving it a degree of diving-level water resistance, and he was quick to point out that MB&F make kinetic sculptures, not tool watches. But he did also say that they had considered it, but that making the two crowns screw-down – essential for raising the water resistance to say 100 metres – would have increased the total size of the watch and so they abandoned the idea.

The HM7 Aquapod is very large, almost 54 mm across and over 21 mm thick, but the central case is only about 35 mm in diameter. The rest is taken up by the rotating bezel and the space separating it from the central case (in titanium or red gold, according to the version). The case consists of two hemispheres of sapphire crystal with a metal caseband at the centre, along with many other components: a total of 95. The two crowns are part of the concept of symmetry that underpins design: the one on the left is for winding (only necessary when the watch has completely run down, because it has a self-winding movement), the one on the right for setting the time. The rotating bezel is in ceramic, with numerals created by laser-engravng followed by filling with metallized titanium. The strap is in engraved aircraft-grade rubber with folding buckle. Water resistance is 5 atm/50 metres (splash resistant only, not suitable for taking into the water). 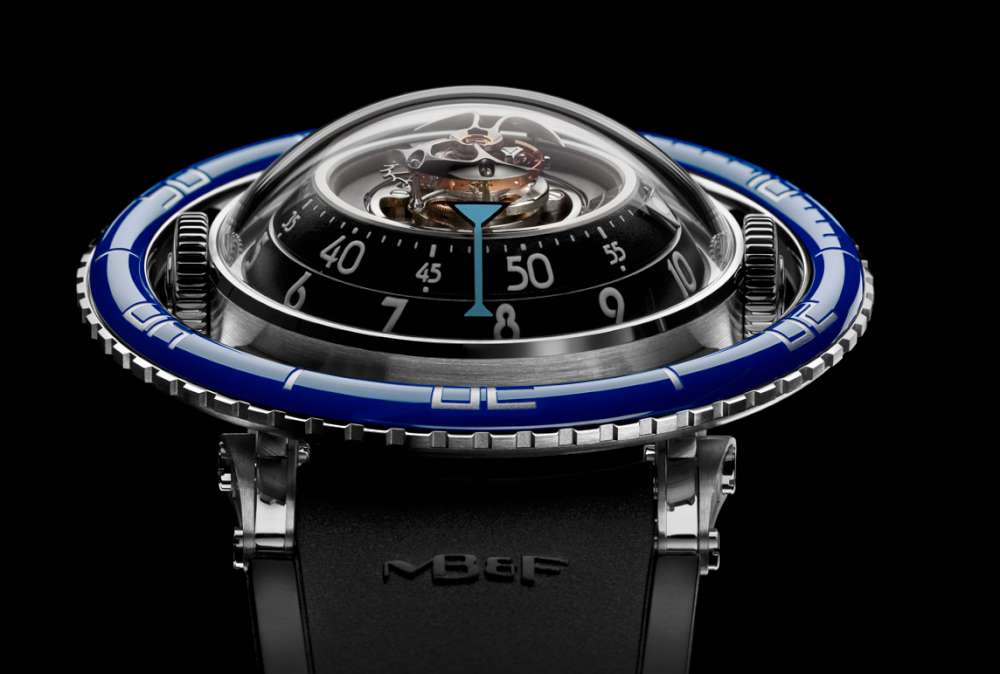 Most watch movements are developed horizontally to reduce final watch thickness. In the HM7 Aquapod, the calibre is built vertically, so that energy is progressively transferred from the rotating weight at the bottom, up through progressive layers, reaching the flying tourbillon at the top. The movement was designed by Ruben Martinez (MB&F) and built in-house, with 303 components. It is wound by the rotor at the bottom, machined from a solid block of titanium. Below this, a platinum section provides the mass assymetry necessary to get the rotor spinning with the user’s wrist movements. The 60-second tourbillon has a balance running at 2.5 Hertz (18,000 vibrations per hour), and the watch has a power reserve of 72 hours. 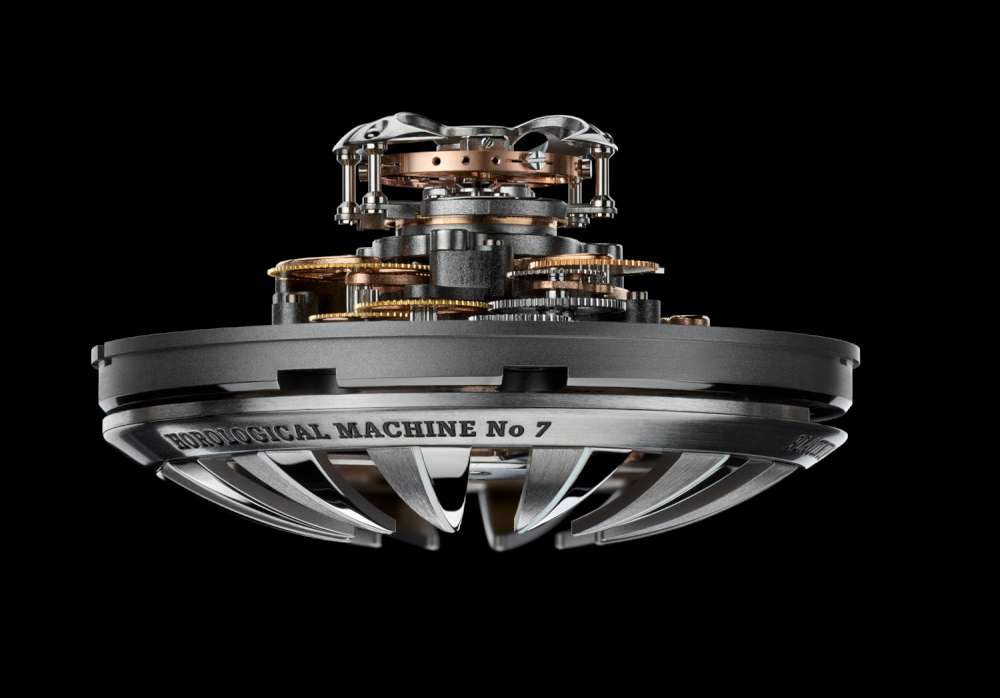 The time display rings are curved to follow the profile of the sapphire crystal that forms the top half of the case. Indications are hand-painted with luminescent paint to make the watch attractive in the dark. Lume is also applied to the rotor, and there are three panels of AGT Ultra (Ambient Glow Technology) lume around the inside of the movement to light the flying tourbillon. The rings represented a considerable design problem, because they are much heavier than normal hands and so potentially could absorb an excessive amount of energy. This was prevented by means of the materials chosen, aluminium and titanium, and ceramic ball bearings for minimal friction. 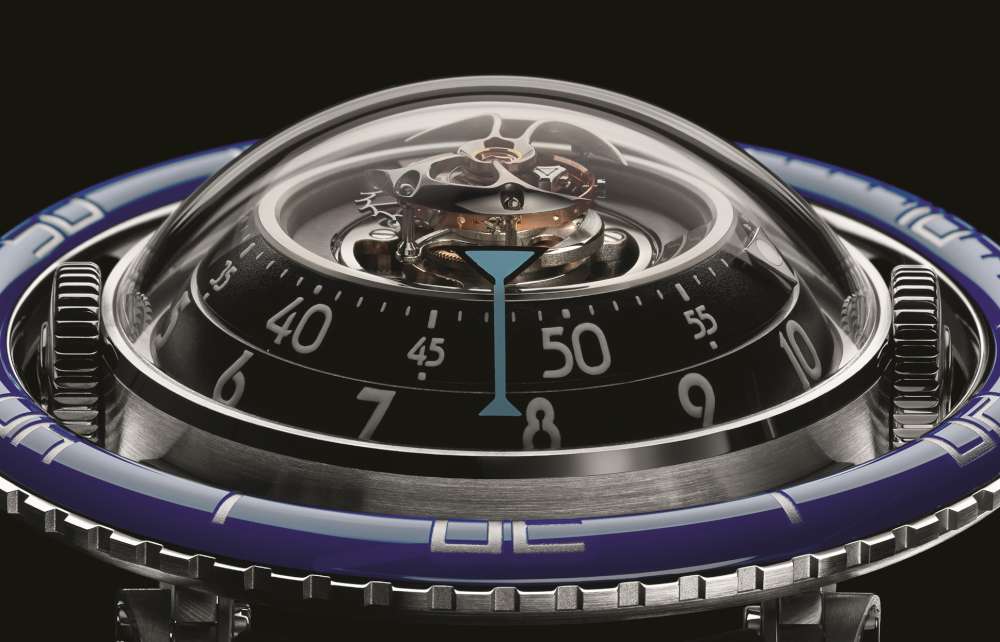 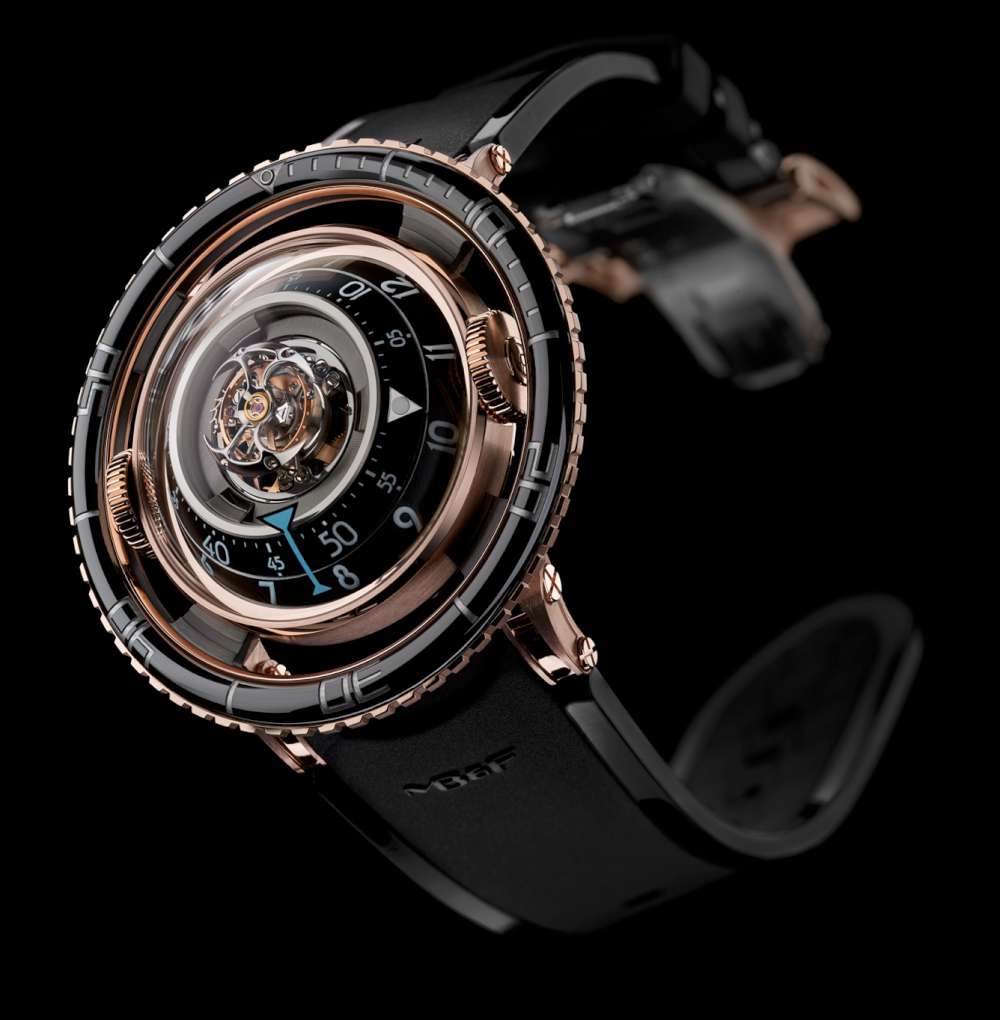 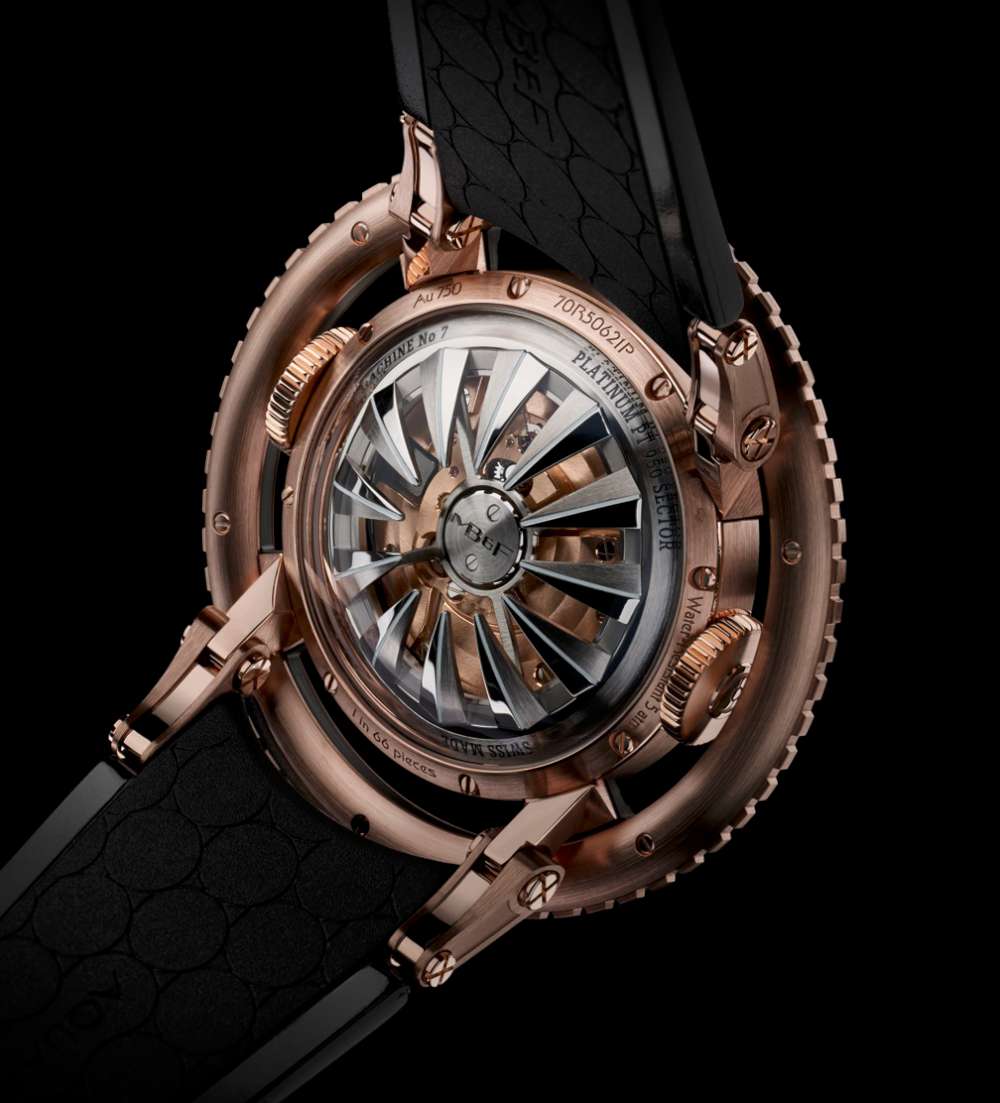