I really like this watch, for several reasons. First of all, it’s a bit crazy. A massive, bulky piece, 50 mm in diameter, 15.2 mm thick, the sort of exaggerated passion that is quite unusual for a measured, Germanic brand such as Montblanc. It has a refreshing brashness. Second, it has some features which, refined a little, would be excellent on any watch, such as the case that can be rotated with respect to the strap so you can see it more easily when you are driving. Third, Montblanc are highlighting the heritage of Minerva, the watch company that Richemont Group bought in 2006 and assigned to Montblanc in 2007. All too often, during this process of absorption, the purchaser prefers to obliterate any memory of the original name in order not to dilute its own brand identity (for example, Bulgari’s purchase of Daniel Roth and Gerald Genta). 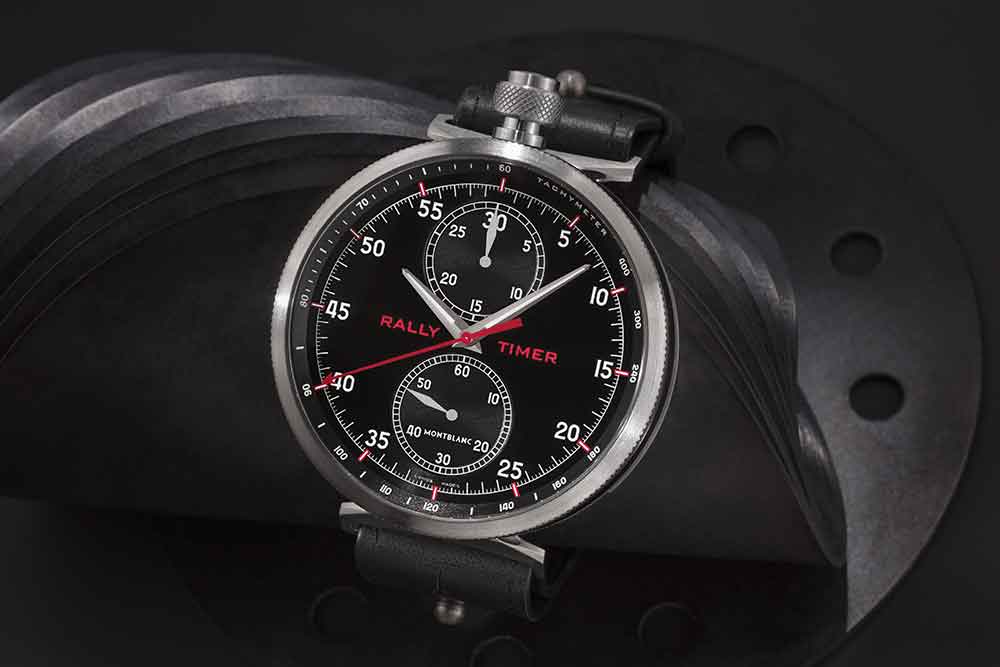 In the early 20th century, Minerva, based in Villeret, was one of the top three brands for stopwatches, developing timepieces capable of recording 100th second times, and becoming involved in Olympics timekeeping. They made special stopwatches for football, water polo and other sports. Montblanc did some research and found a stopwatch, the Rally Timer, designed to be fastened to the dashboard of a car, used in motor sports. Certain features of this watch, such as the black bezel, became unifying motifs in the new TimeWalker collection. In the TimeWalker Rally Timer, that original stopwatch has been recreated, remarkably close to the original in terms of dial layout, and with the necessary adaptation to provide a multi-functional performance: dashboard instrument, table clock, wristwatch, pocket watch. 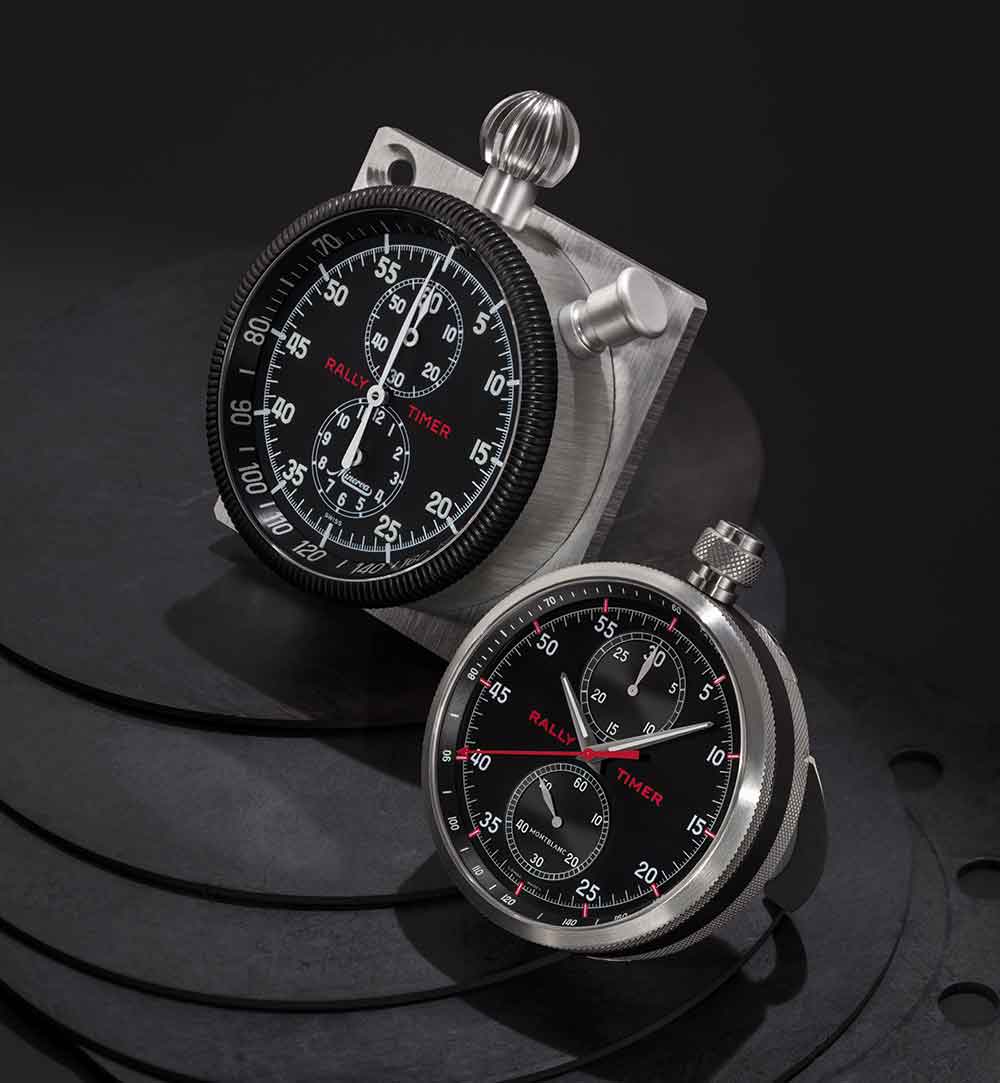 The case, in brushed titanium, has two folding lugs, and it’s quick and easy to remove the black calf leather strap and fold the lugs under the case to turn it into a stopwatch. By opening two legs on the caseback, the watch can be placed on a table. A leather-covered metal plate is also provided – it can be screwed to a car dashboard – into which the watch can be fitted. (Hamilton did the same thing a few years back with their Khaki Aviation Takeoff Auto Chrono). When you have it on your wrist, the watch can then be rotated with respect to the case, all the way through to 180° if required. The caseband is knurled and has a black DLC finish, another reference to motor-racing. The caseback has a shaped display window displaying the movement. 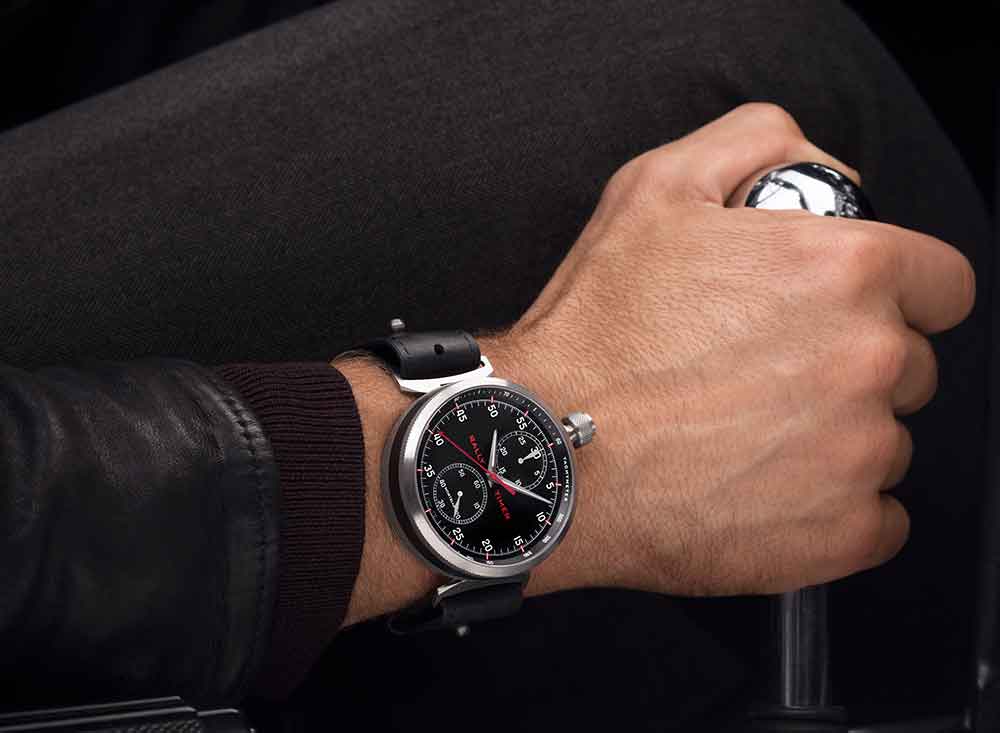 All of the chronographs in the new TimeWalker collection are designed to be practical timing devices, and the dial of this piece reflects the original in its layout and clarity. (Some chronograph watches out there seem to have been designed to be illegible). The quarter-second divisions on the scale are uninterrupted. The chronograph seconds hand has an arrow-shaped tip, a reference to the Minerva trademark arrow that can also be seen in the movement. 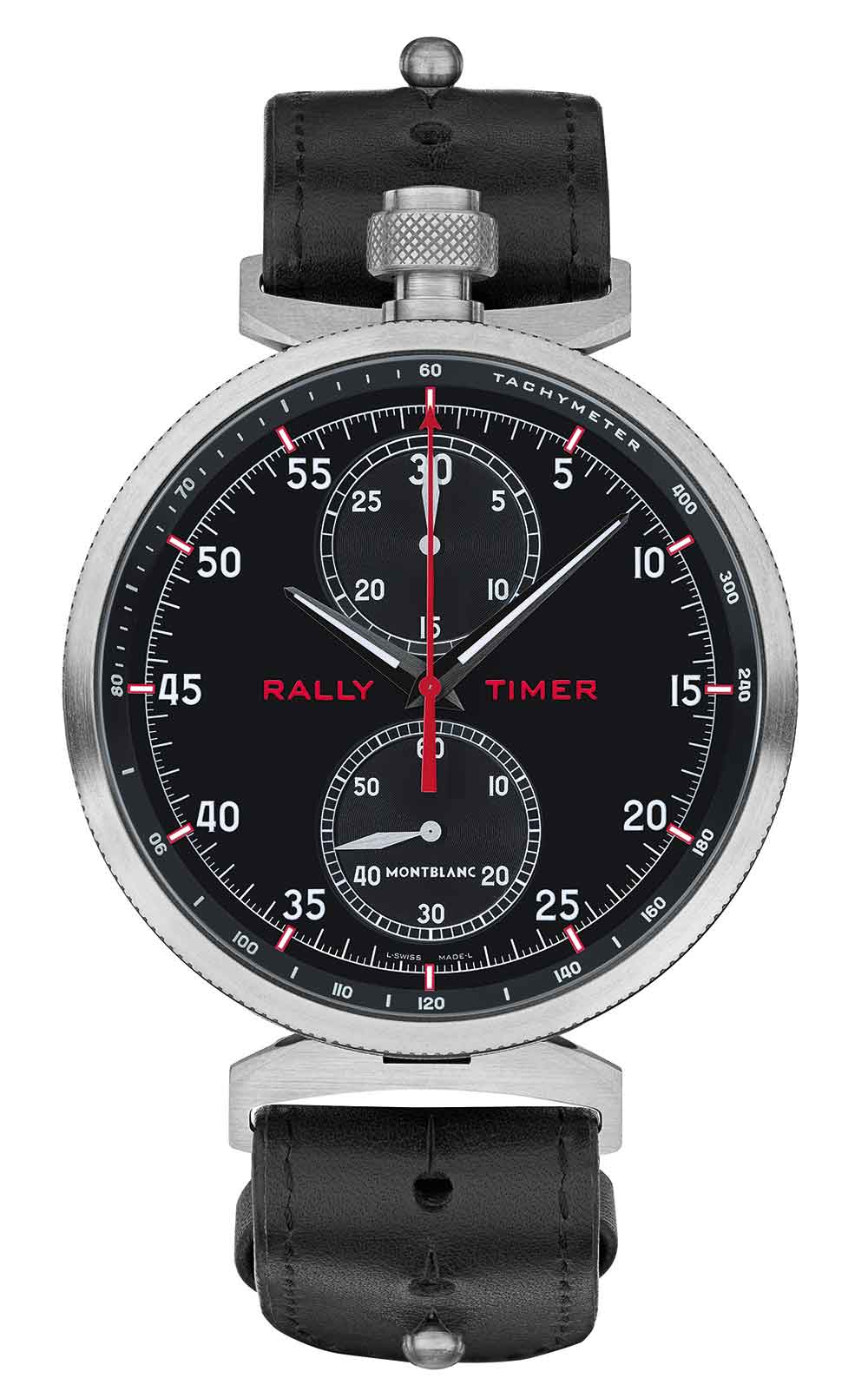 The MB M16.29 movement is inspired by the Minerva calibre 17.29 dating back to the 1930s, and it runs at 18,000 vibrations per hour, 2.5 Hertz. With this frequency, Montblanc could have used a fifth-second scale as was used on the original 1930s Rally Timer stopwatch; perhaps they opted for the quarter-seconds for increased clarity, in order have room for the red hour markers with a central section of SuperLuminova. One advantage of the low frequency is that the balance is larger than in most watches, 14.5 mm in diameter, nice to watch. The movement can be viewed through the display caseback, and it has the fine hand-finishing typical of movements made in the ex-Minerva workshops at Villeret – Côtes de Genève, circular graining and bevelling, in addition to the differentiated surfaces, with red-gold-plated bridges and gold-plated wheels in the going train. The movement has a column wheel for the chronograph functions, with horizontal clutch. The pusher in the crown is used to start, stop and reset the chronograph. 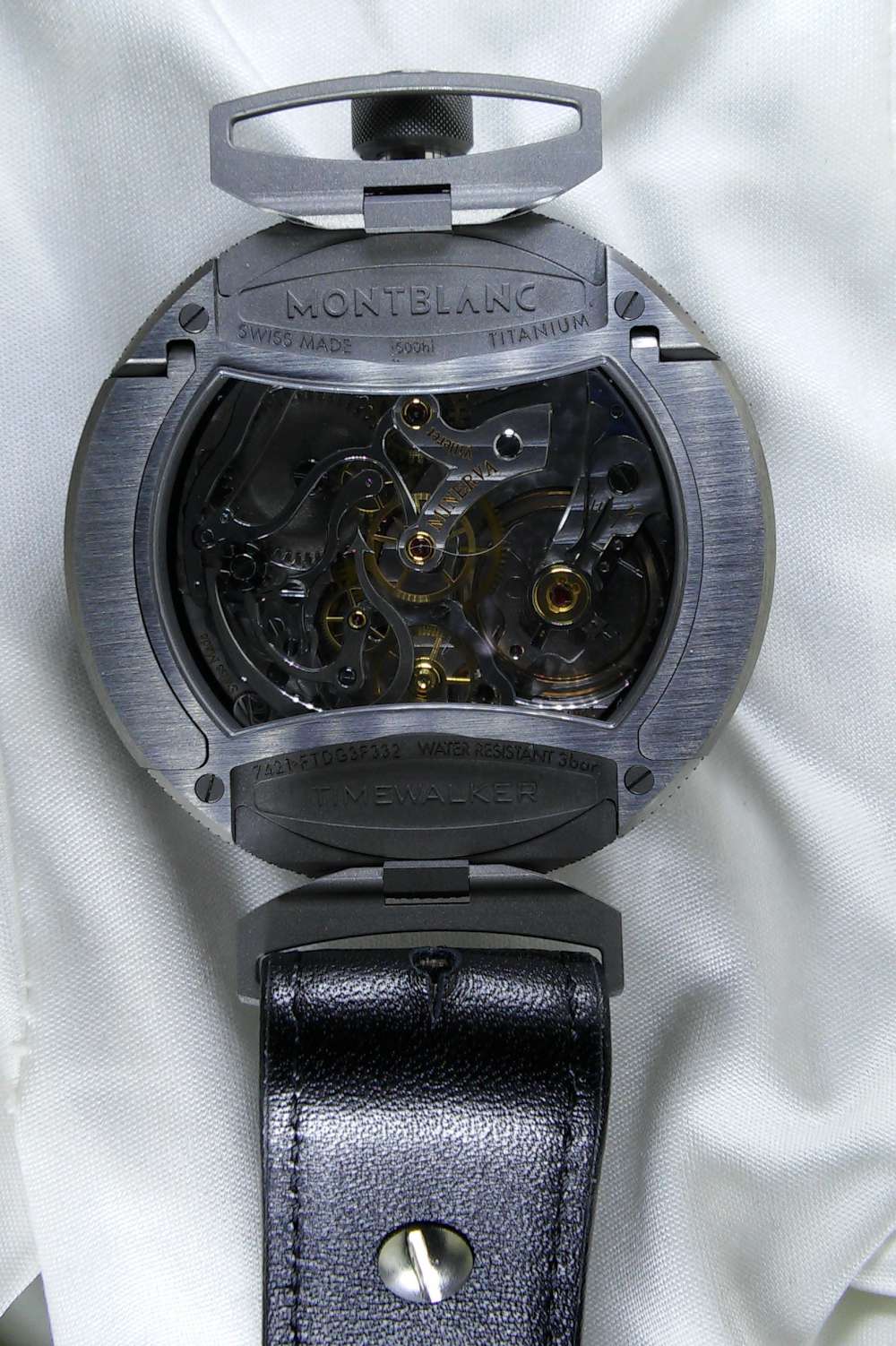 The Montblanc TimeWalker Rally Timer is water-resistant to 30 metres. Each Montblanc watch undergoes the Montblanc Laboratory Test 500, which simulates real-life wear for over 500 hours. 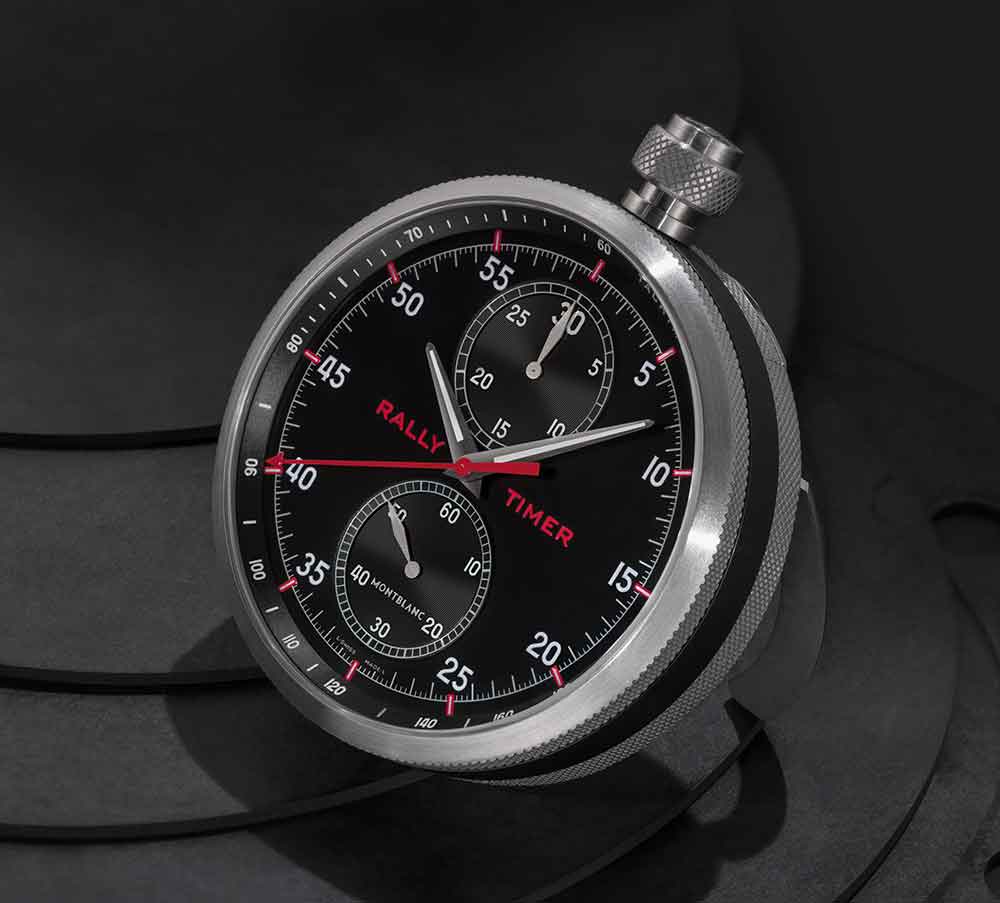