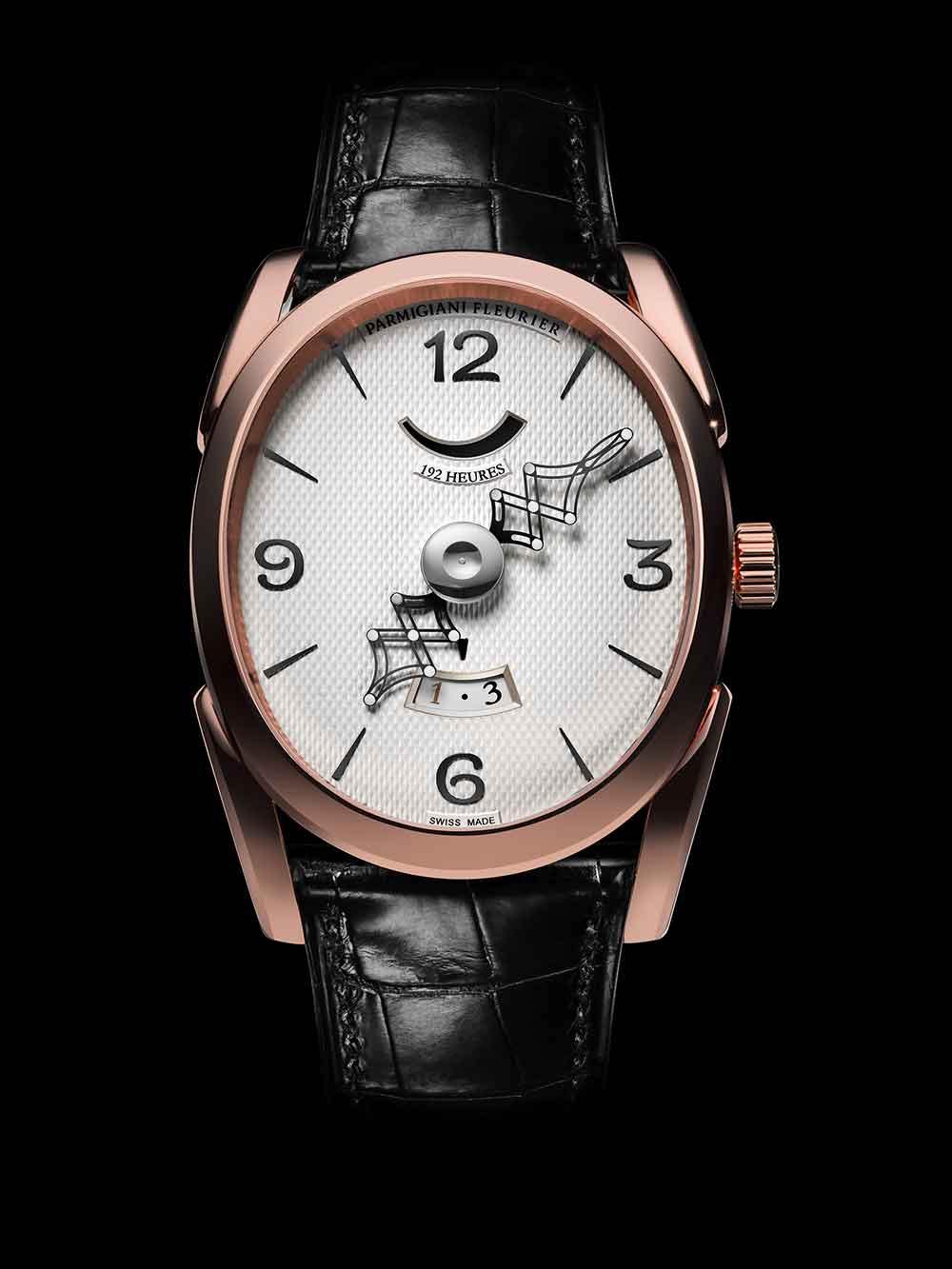 New features of the 2017 Ovale Pantographe

This year’s edition has black hands and hour markers (in the previous edition they were blue) on the barley-grain-textured dial. Another difference between this 2017 version and the previous releases is the movement, which is still the same Parmigiani PF111 calibre, except that it is made in gold, white or pink according to the version. It is hand-wound, and runs at 21,600 vibrations per hour, 3 Hertz, with an exceptional power reserve of 8 days, or 192 hours. The movement is visible through the sapphire window in the caseback, revealing the swan-neck regulator on the balance, and the gracefully curving design of the bridges. While they were working on the original concept, Michel Parmigiani and his watchmakers dedicated a lot of attention to the pantographic hands controlled by two pawls in a cam, which could potentially absorb a lot of energy. Each hand is made up of about 15 parts, with titanium used to keep weight to a minimum. 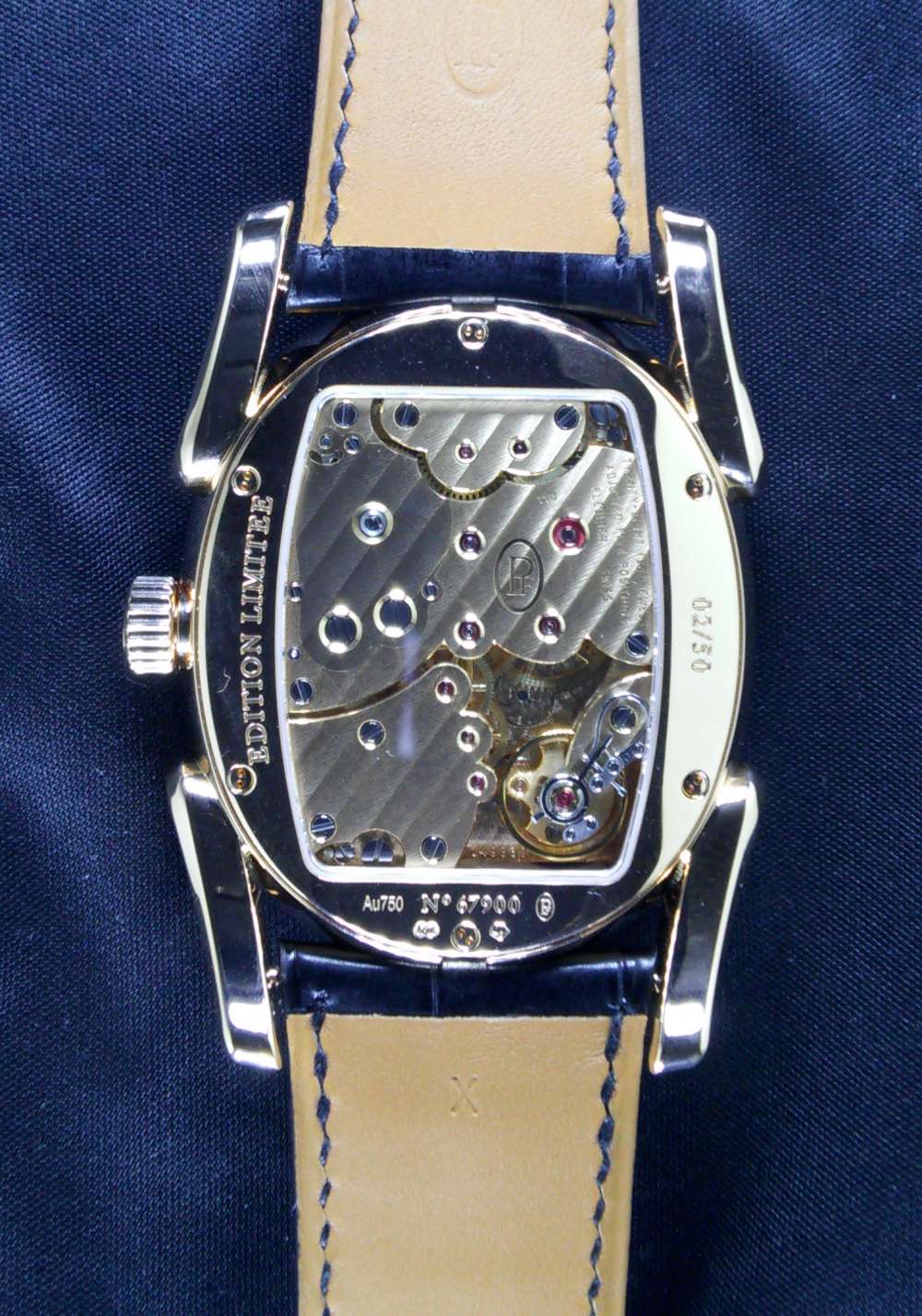 The dial has Parmigiani’s hallmark sense of balance, with the brand name modestly placed at the top in the shadow of the bezel, a power reserve indicator, and a curved date window at the bottom. The case is a masterpiece of complex curves, with a distinctive squarish oval shape, and, from the side, a beautiful profile with a delicate curve for case and watchglass, and the teardrop lugs whose geometry is generated by the Fibonacci sequence, one of Michel’s sources of inspiration. It is 45 mm from top to bottom, and 37.7 mm wide. 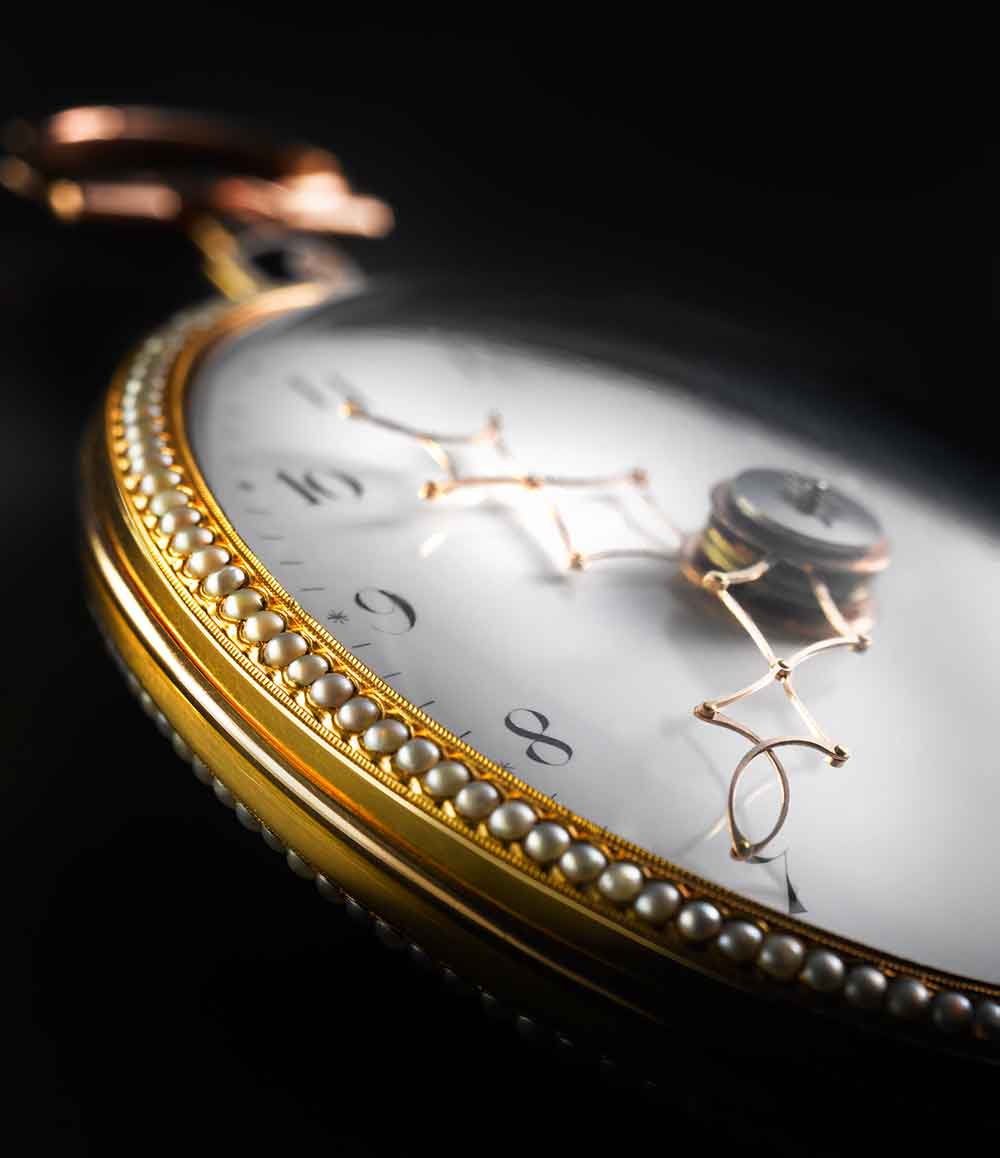 The Ovale Pantographe is not an original idea by Michel Parmigiani. Over the years, an important part of his work has been the restoration of historic watches, and as he himself says, even though his brand is just 20 years old (they celebrated their 20th anniversary in 2016), he has worked on many antique watches – mainly from the Sandoz collection – that have given him a privileged view of fine watchmaking through the centuries. In about 1997, he was delivered a pocket watch made by London watchmakers Stedman & Vardon (John Stedman, Samuel and Thomas Vardon, Soho) in about 1790, a graceful, oval piece with telescopic hands. 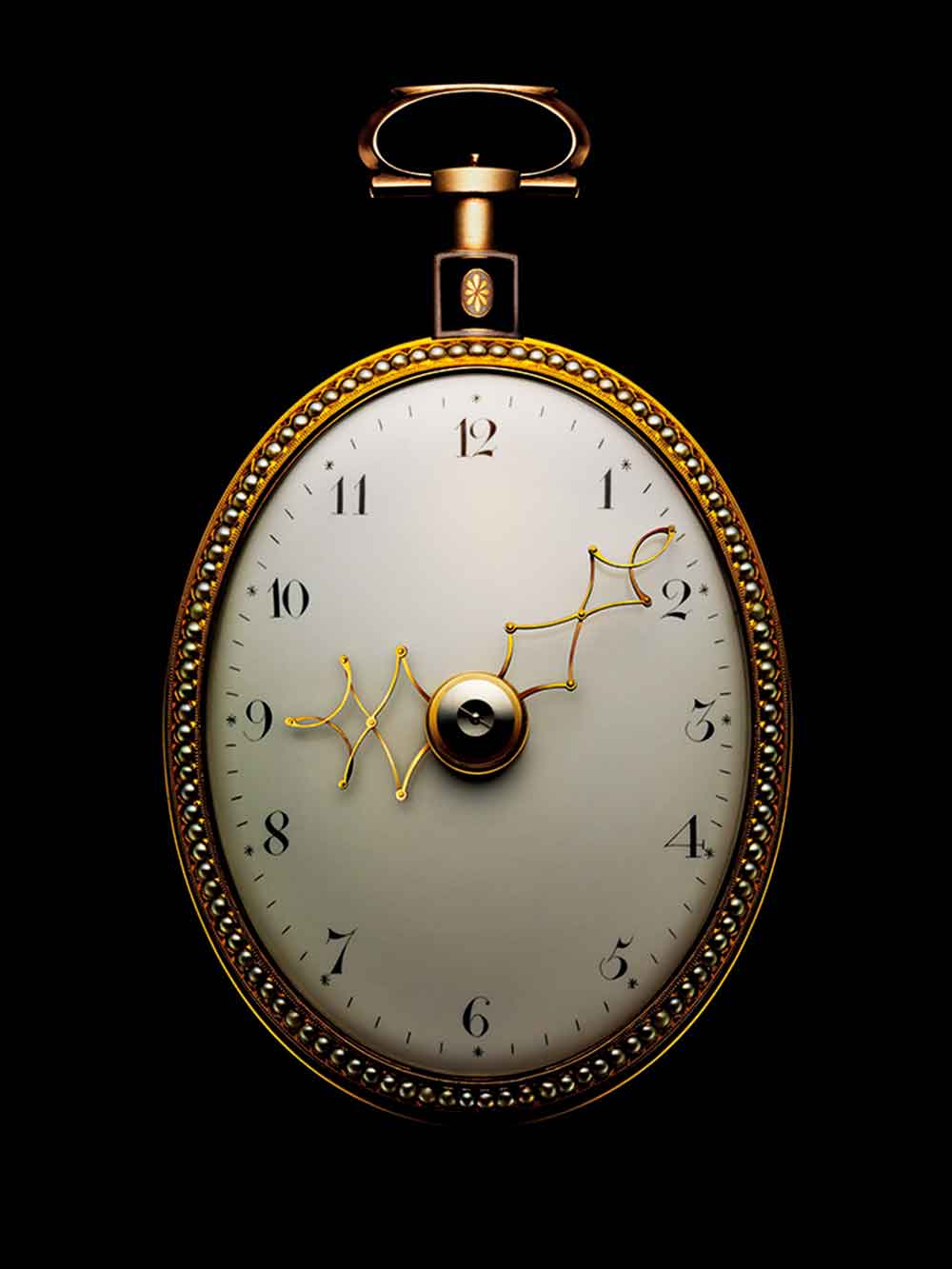 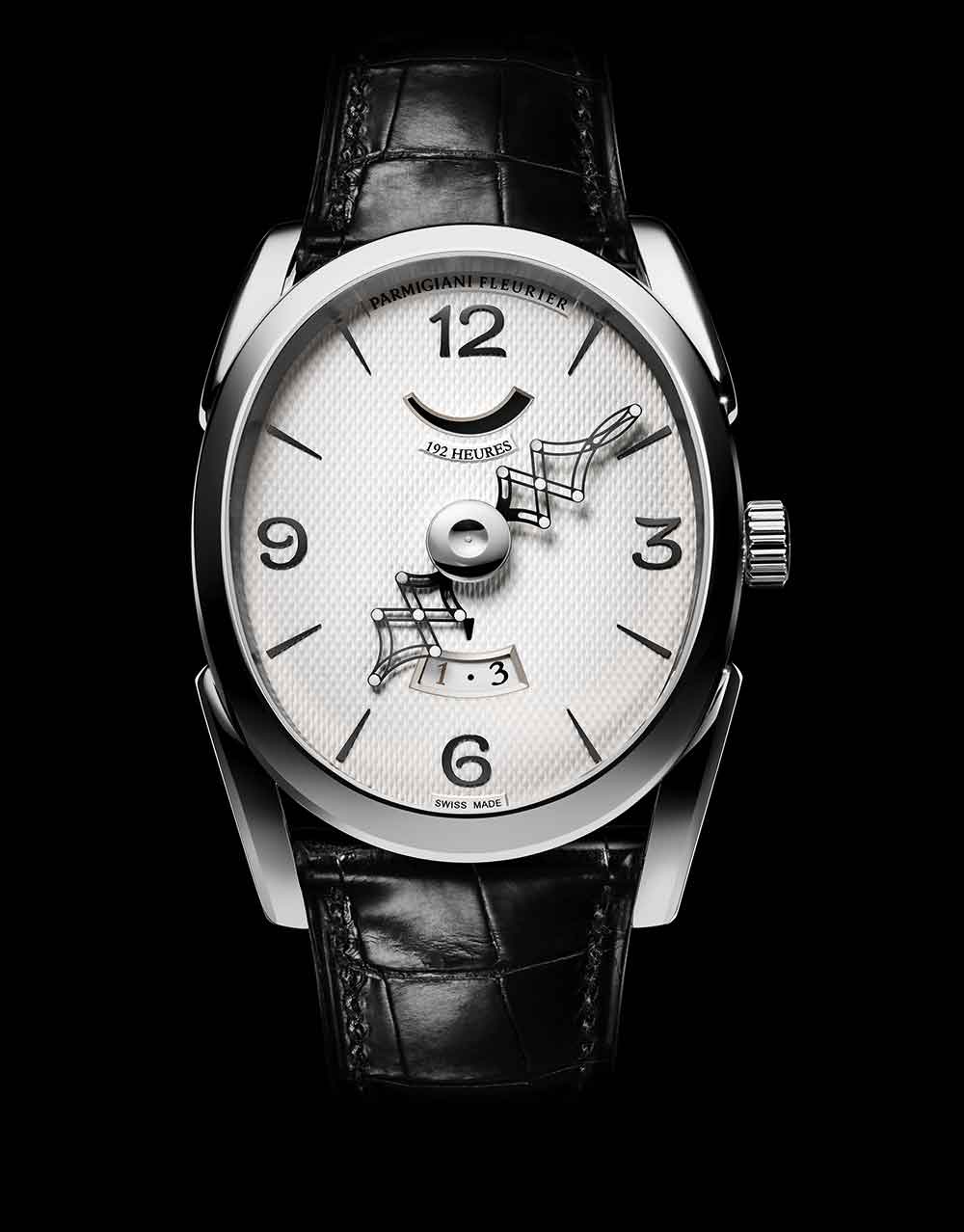