This year is the 60th anniversary of the Altiplano. “Today,” said Piaget CEO Philippe Leopold-Metzger, who will be retiring on 31 March 2017, “it has become the line that we sell most, and most transversally, with 40% sold to women. We are working on complications, introducing the chronograph two years ago, and now we are presenting a tourbillon movement. Celebrations of the Altiplano anniversary began on the first day of SIHH 2017, and will end on the last day of SIHH 2018. We are a radiant brand, we like to think about the sunny side of life, with lots of colourful dials. There will be many new products during the year, including a concept watch, something amazing. We will make just two, we won’t sell them. The basic idea is to go smaller. We have many records with Altiplano, and today, ultra-thin is an important segment in high watchmaking. With all this heritage, and the fact that at Hollywood, Altiplano is the watch that men and women prefer to wear, the future is bright, even though the last two years have been difficult.” 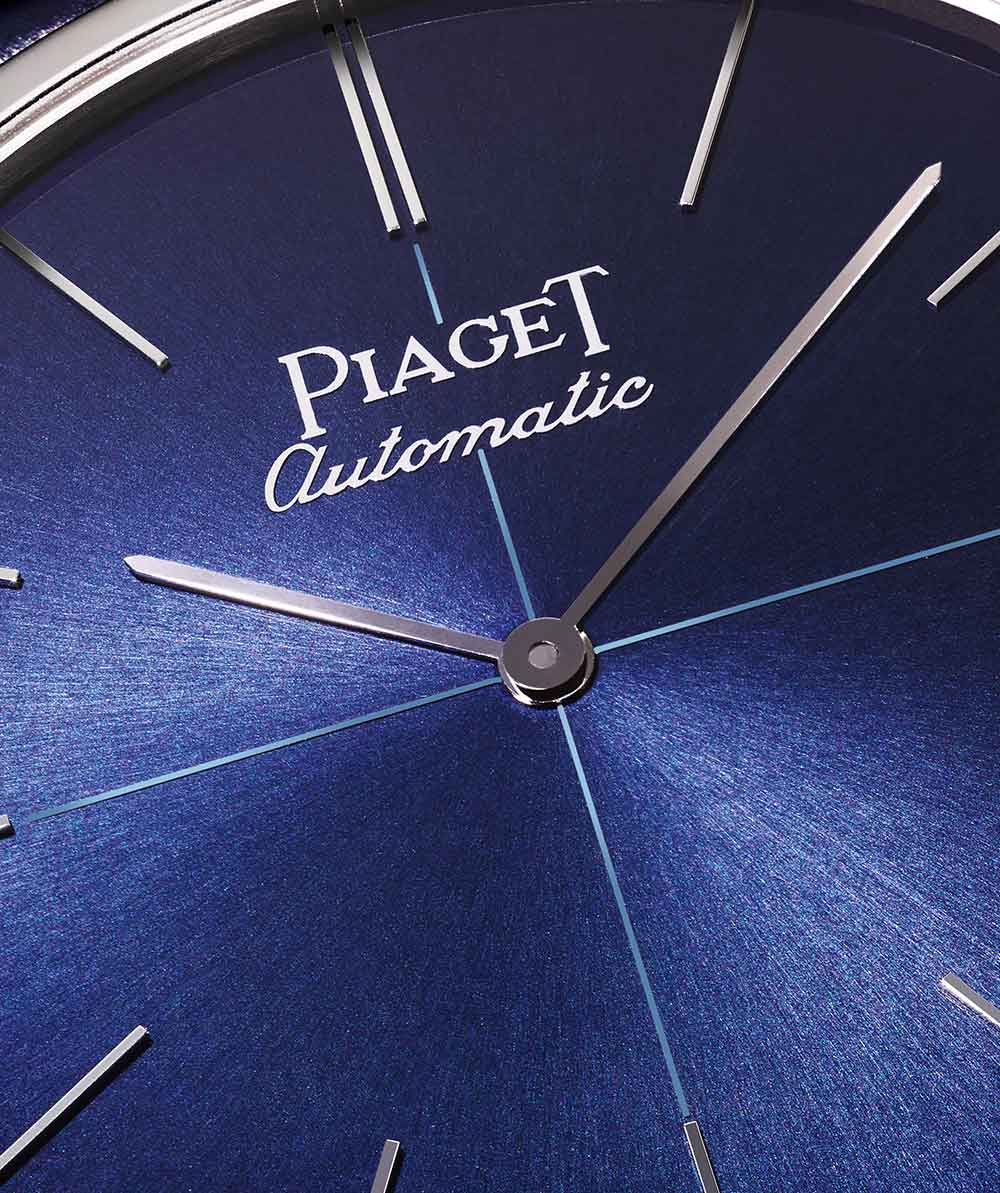 Philippe Leopold-Metzger provided an upbeat summary of the brand at the presentation in Geneva at SIHH 2017. The ultra-thin segment is interesting for Piaget because, unlike many other watch types, it’s difficult to copy. The expertise necessary to develop ultra-thin movements is possessed by a small number of high-end brands, and there are no third-party ultra-thin movements that someone wanting to make an imitation can just go out and buy and put into a case.

The ultra-thin story began in the early 20th century when Piaget was making ultra-thin components for other brands, but it was in 1957, when the ultra-thin 9P hand-wound movement designed by Valentin Piaget, the founder’s grandson, just 2 mm thick, was introduced at the Basel watch fair. This was followed in 1960 by the 12P movement, self-winding and just 2.3 mm thick, made possible by an off-centred micro-rotor. The new Piaget ultra-thin watches were given elegant, minimalist cases and dials that also became a classic, accompanied by a memorable name, taken from the high-altitude plateau of the Andes Cordillera range. 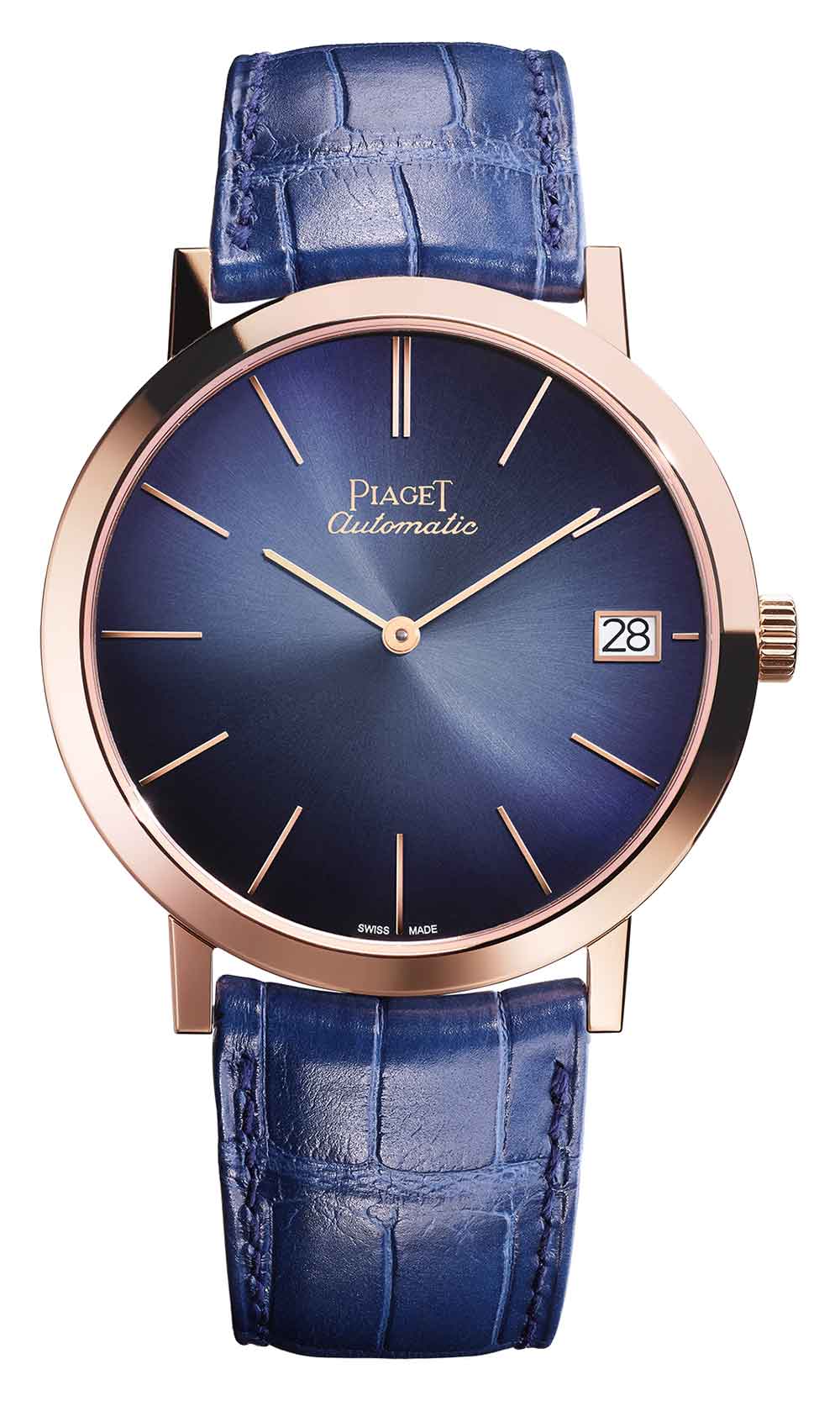 This year’s anniversary celebrations comprise the colourful dials that Philippe Leopold-Metzger mentioned. The blue 40 mm watch has a pink gold case, and a sunray patinated dial with gold appliqué hour batons. All the new coloured Altiplano watches have subtly graded dials, darker at the edge, rather like watches by H. Moser and Glashütte Original. Inside, the in-house Piaget 1203P automatic movement, 3 mm thick, runs at 21,600 vibrations per hour, 3 Hertz, and has a power reserve of 44 hours. The caseback provides an attractive view of the movement, with the Côtes de Genève centred on the micro-rotor, bevelled bridges and blued screws. The Altiplano 40 mm with blue dial, G0A42051, is a 260-piece limited edition, available in boutiques from April 2017. Price €26,100. 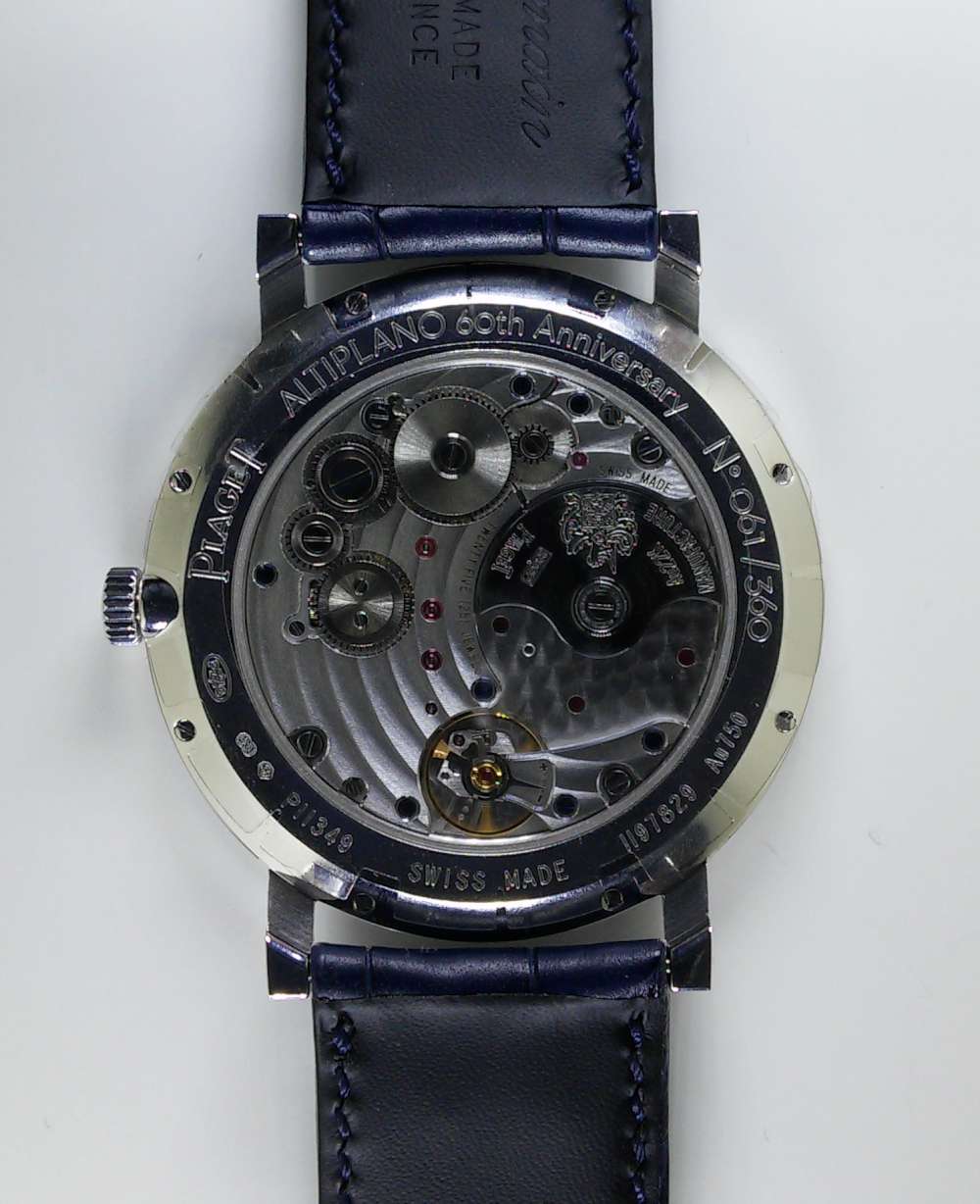 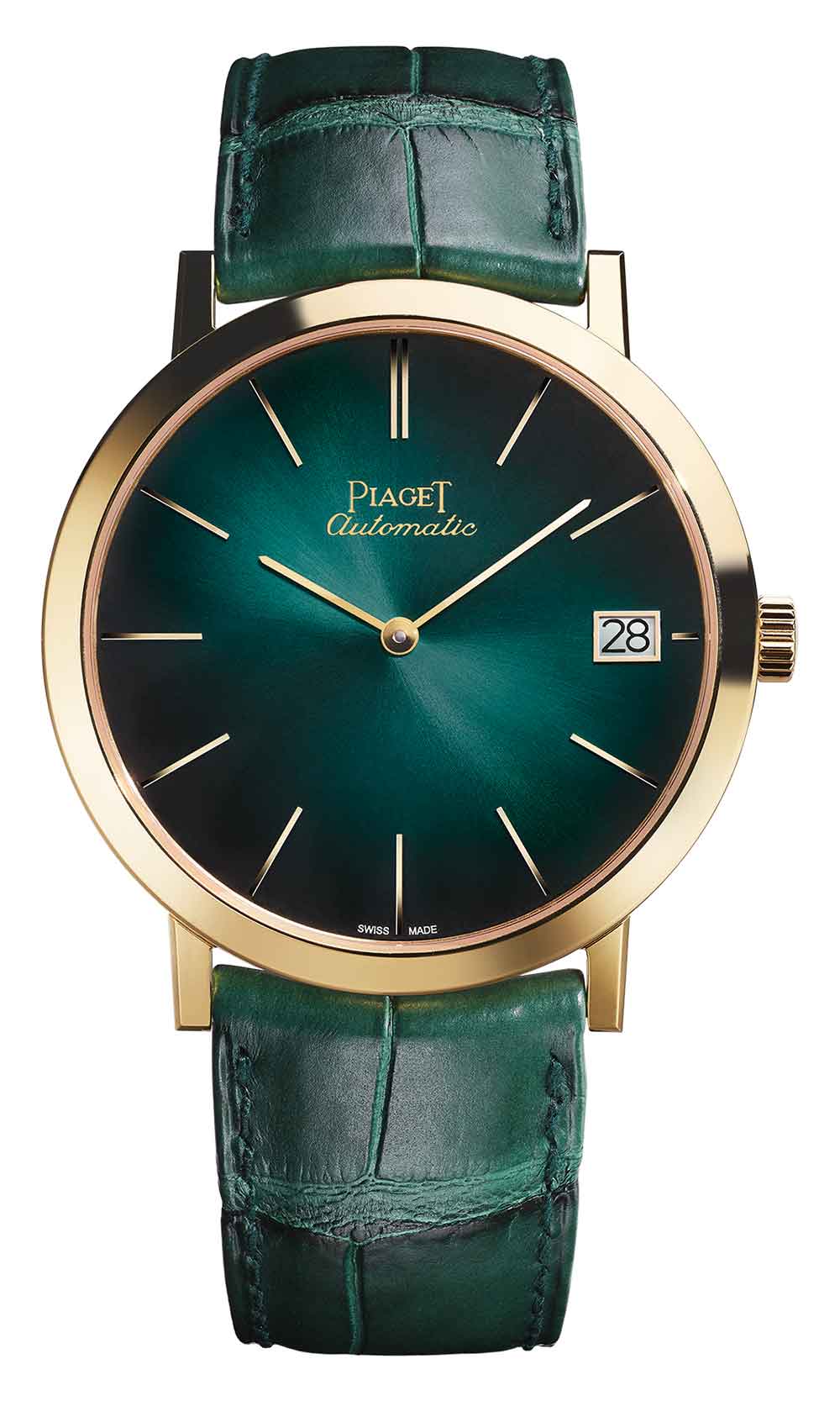 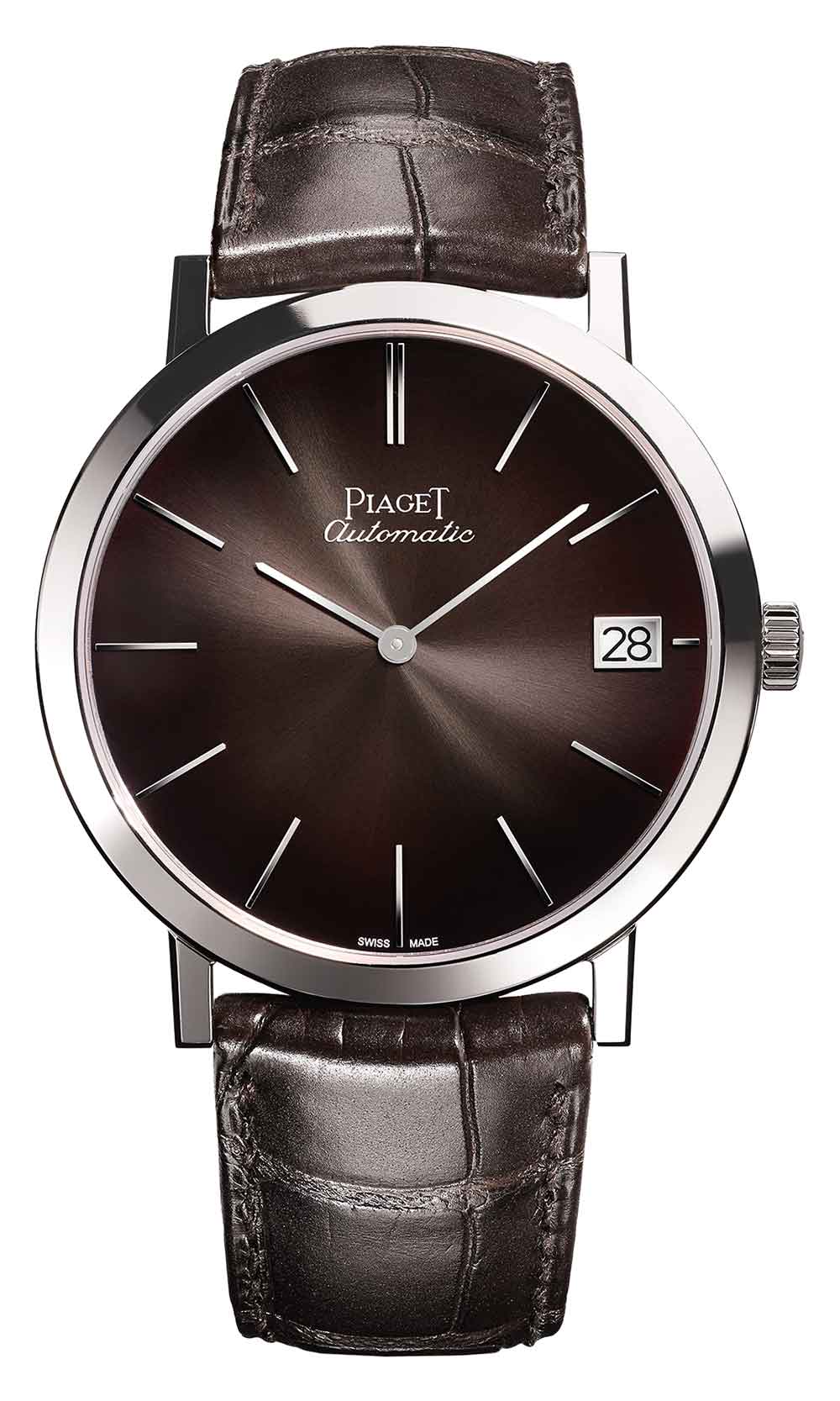 This model looks back to the first Piaget ultra-thin watches, with a historic logo, and a central cross. The sunburst dial is in a blue that has become a Piaget trademark, framed by a white gold case. The watch is powered by the hand-wound calibre 430P, 2.1 mm thick, built in-house and following in the footsteps of the 9P that marked the start of the brand’s ultra-thin story. It runs at 21,600 vibrations per hour, 3 Hertz, with a power reserve of about 43 hours. The watch has a blue alligator strap with a white gold pin buckle. G0A42107 is a limited edition of 460 pieces, in boutiques from April 2007, price €18,900. 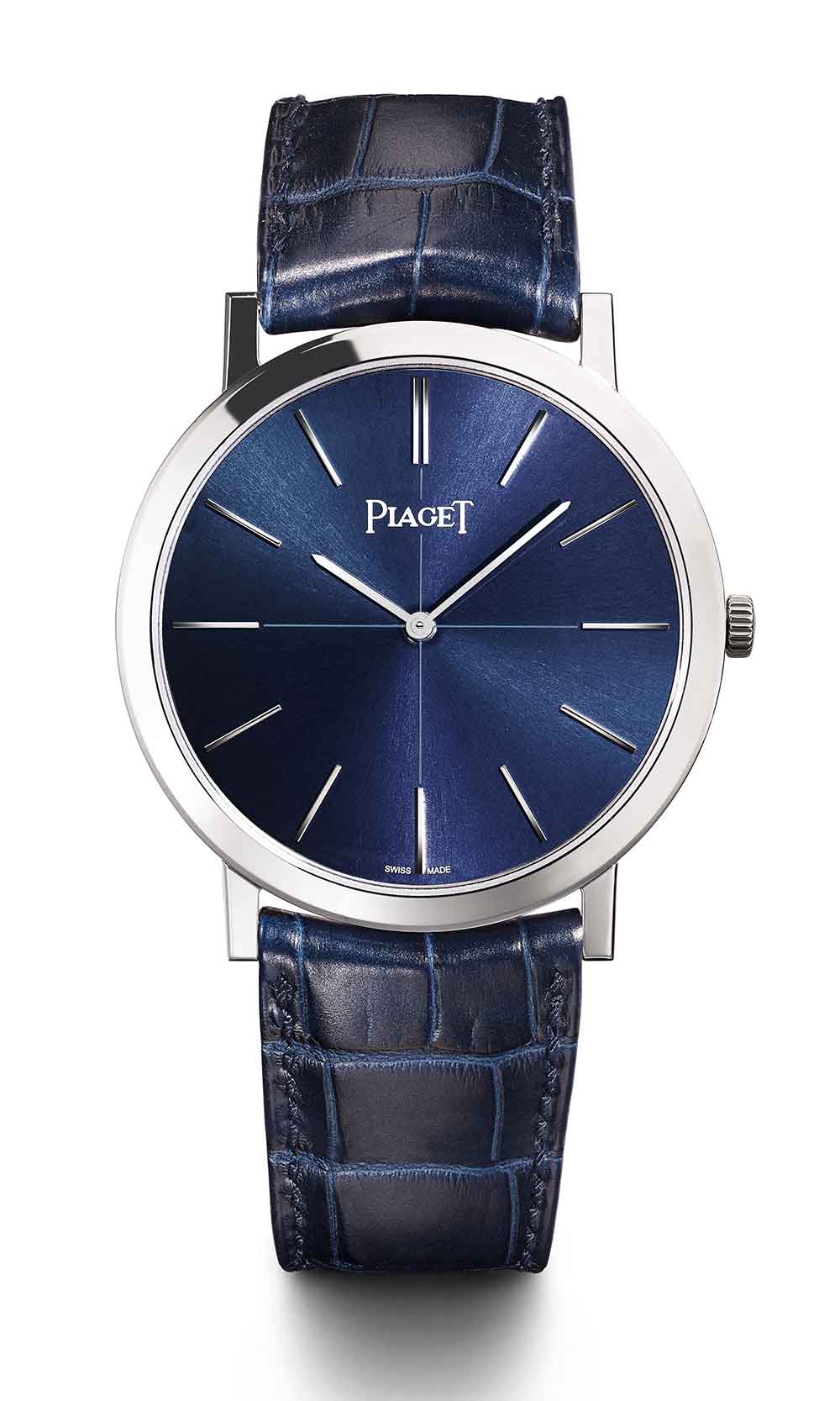 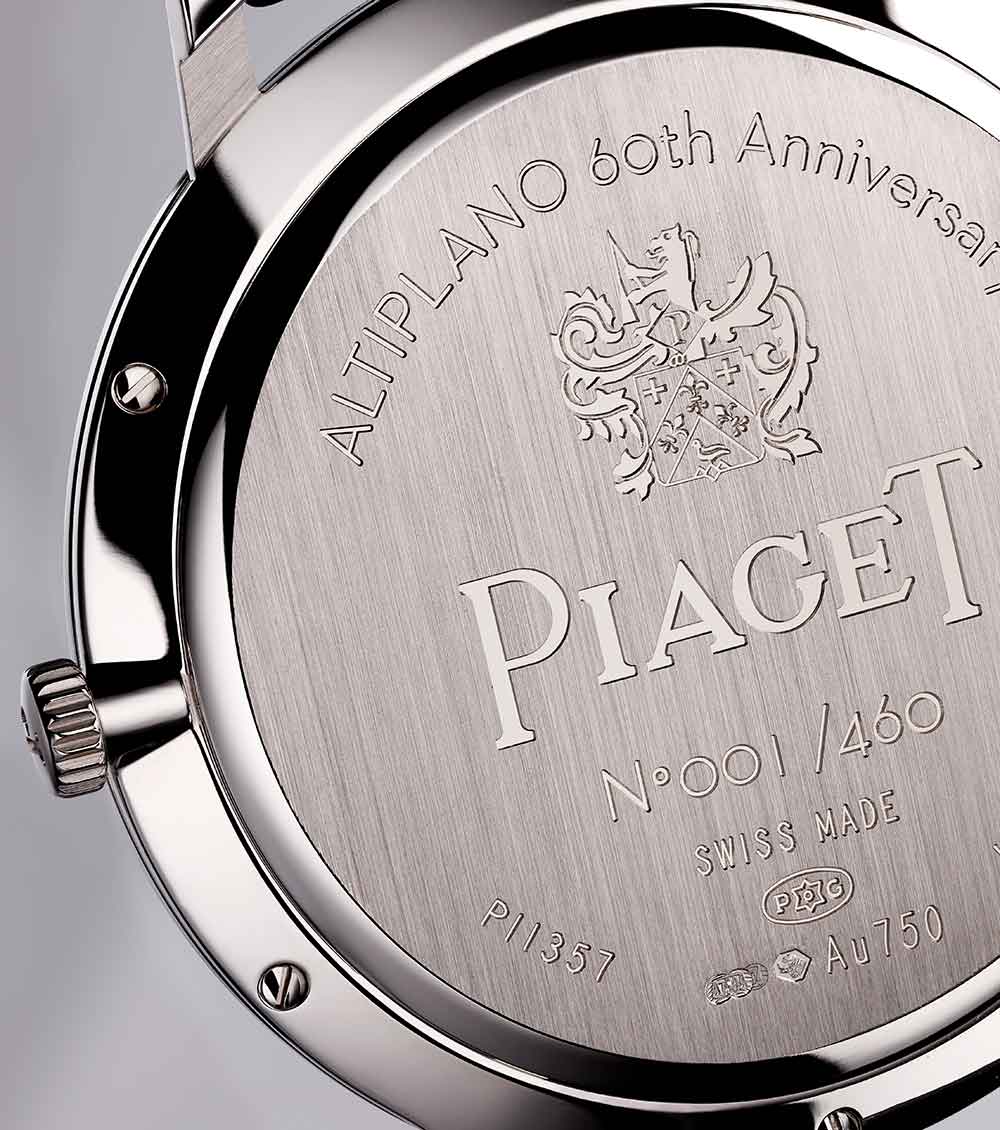 This model celebrates the first Piaget ultra-slim watch, and it has a white gold case, sunray blue dial with a slim cross motif at the centre, and a historic Piaget logo. The watch is powered by the Calibre 1200P, 2.35 mm thick, a movement presented in 2010. The sapphire crystal display window in the caseback reveals the customary fine movement finish. The G0A42105 is a 460-piece limited edition. It will be available in boutiques from April 2017, price €25,000. 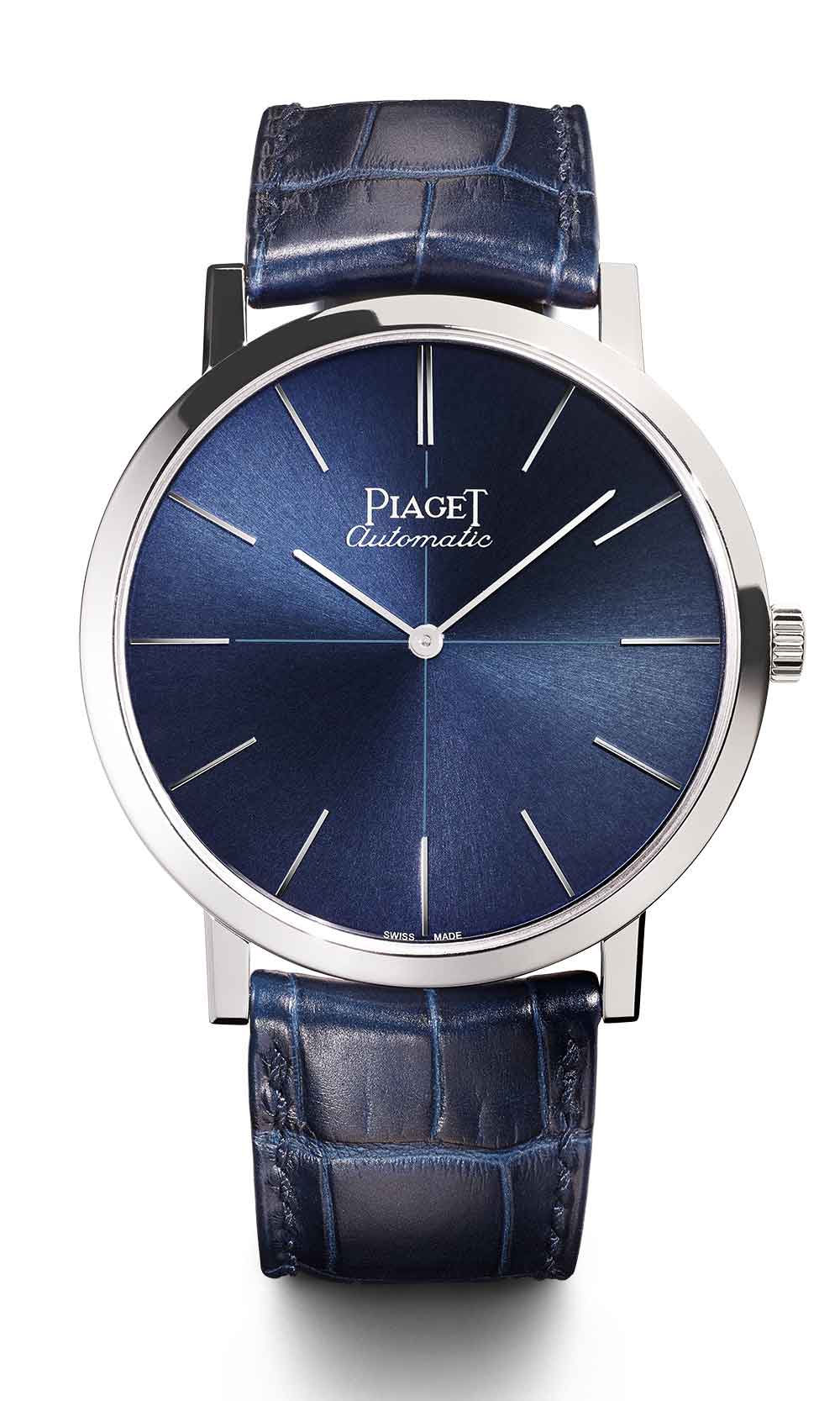 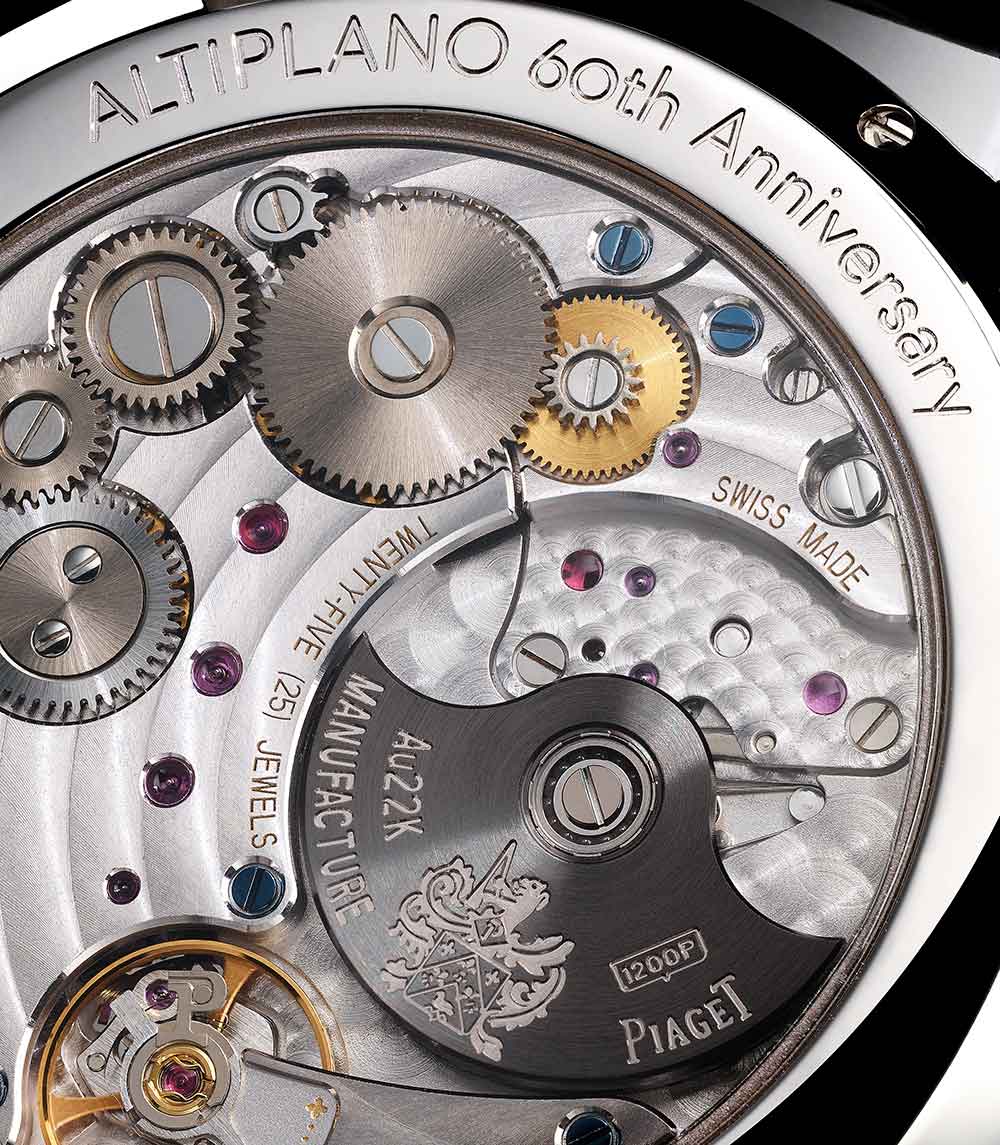 This watch with a case diameter perfect for women has a white gold case, and a graded pink dial with gold appliqué hour indices. It is powered by the hand-wound Piaget 430P movement, 21,600 vibrations per hour (3 Hertz), power reserve 43 hours. Pink alligator strap with white gold pin buckle. A 360-piece limited edition, available in boutiques from April 2017, price €18,800. 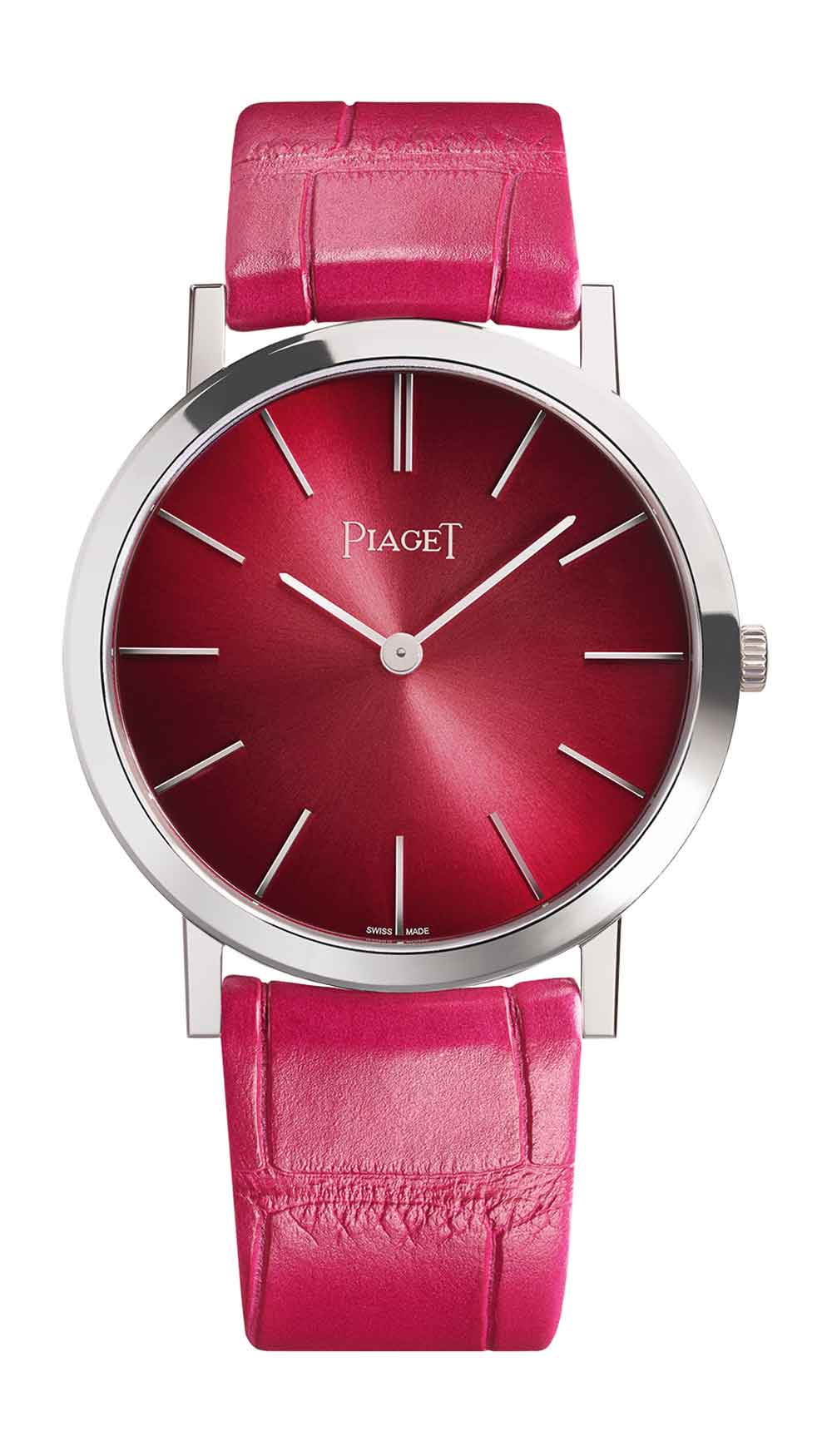 This watch has a white gold case set with 72 diamonds on the bezel. It is powered by the hand-wound Piaget 430P movement, 21,600 vibrations per hour (3 Hertz), power reserve 43 hours. Pink alligator strap with white gold pin buckle. A 360-piece limited edition, available in boutiques from April 2017, price €26,600. 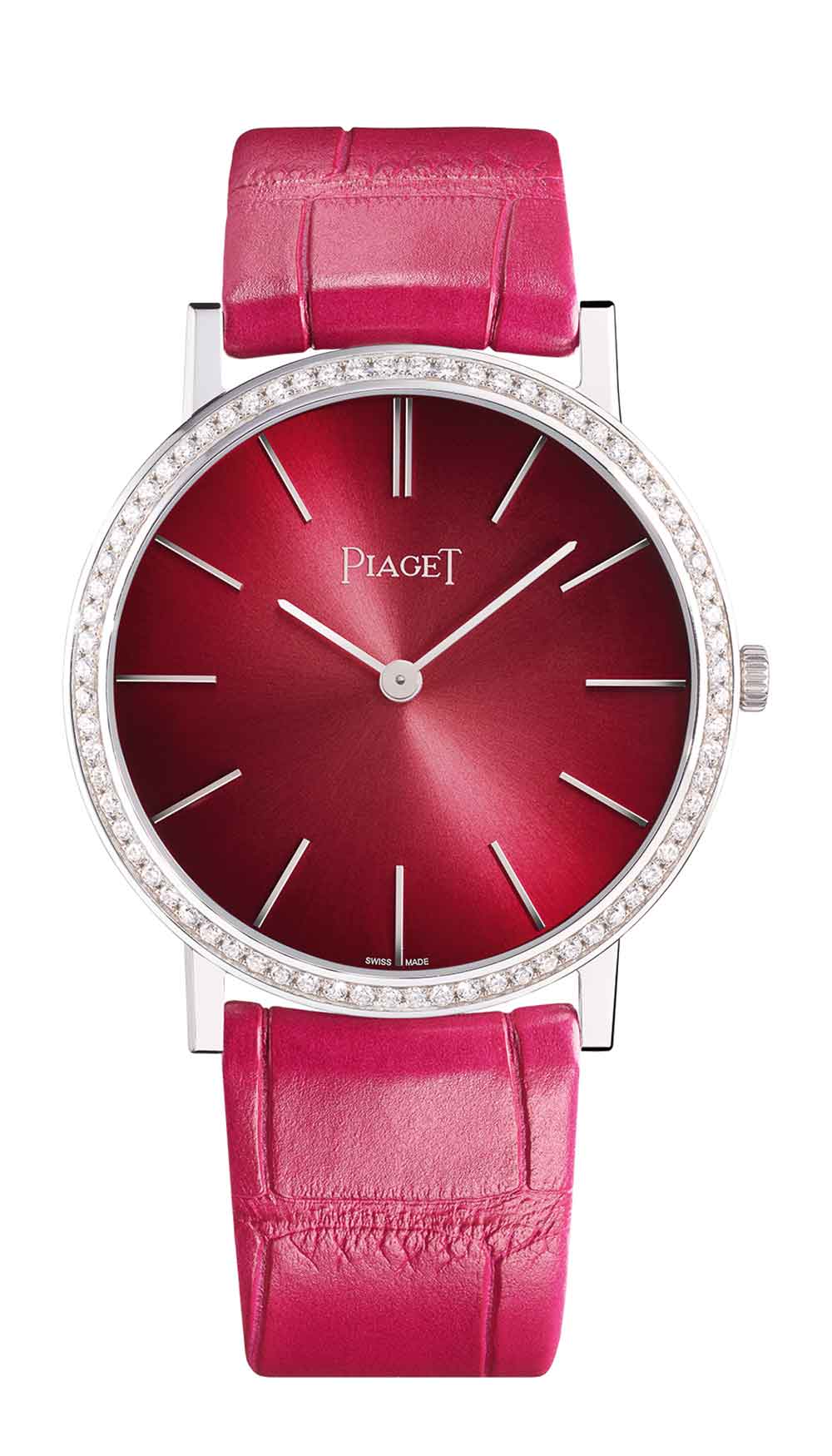