To say that the Excalibur Quatuor by Roger Dubuis is an example of thinking out of the box would be a negative exaggeration. It has literally exploded the box. Abraham-Louis Breguet invented the tourbillon to constantly vary the position of the balance and even out the variations in rate caused by gravity. Roger Dubuis thought: why not start with four balances in different positions? And the result was the Excalibur Quatuor, presented in 2013 after five years of research. A new limited edition has now been presented, in which the unusual mechanics is accompanied by a new material, cobalt chrome micromelt alloy. 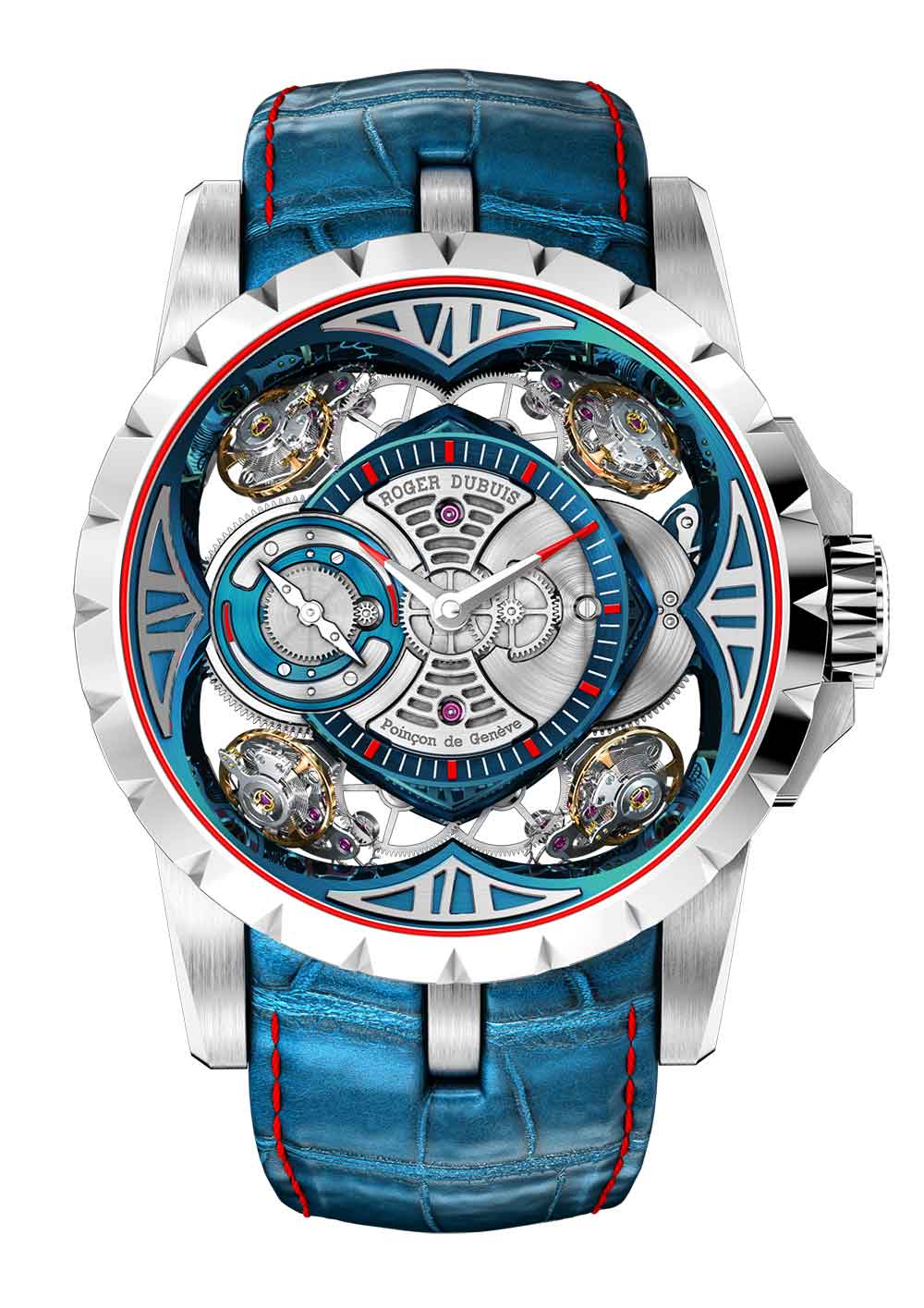 Cobalt chrome is used for the case, bezel, caseback and crown. The micromelt alloy is made by melting it and then atomizing it before being cast into solid bars, ready for processing. The resulting alloy is polarized and non-crystalline, resistant to corrosion and heat, and very tough. It is used in exhausts and in the aerospace industry. It forms a passive protection film which ensures that it retains its silvery gleam indefinitely. It is 100% tolerated by the human skin, and in fact the brand tested it, making it into a ring that was then worn by an employee for a year. 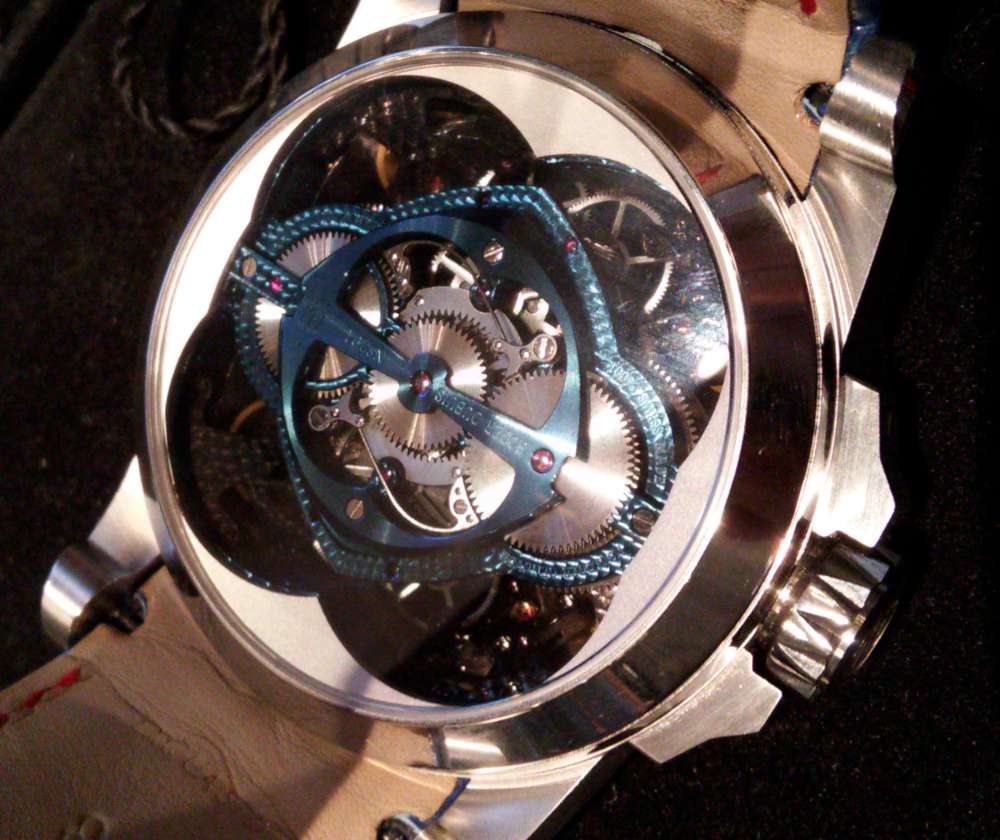 Cobalt chrome micromelt has another property that is more difficult to appreciate: its exceptional reflective ability, making it whiter than steel or titanium. So it’s the opposite of the blacker-than-black carbon nanotubes material used by Panerai and MCT. The silvery case contrasts with the racing-inspired red details, including red SuperLuminova on the white gold hands and red stitching on the strap. The blue surfaces are in blue PVD finish. 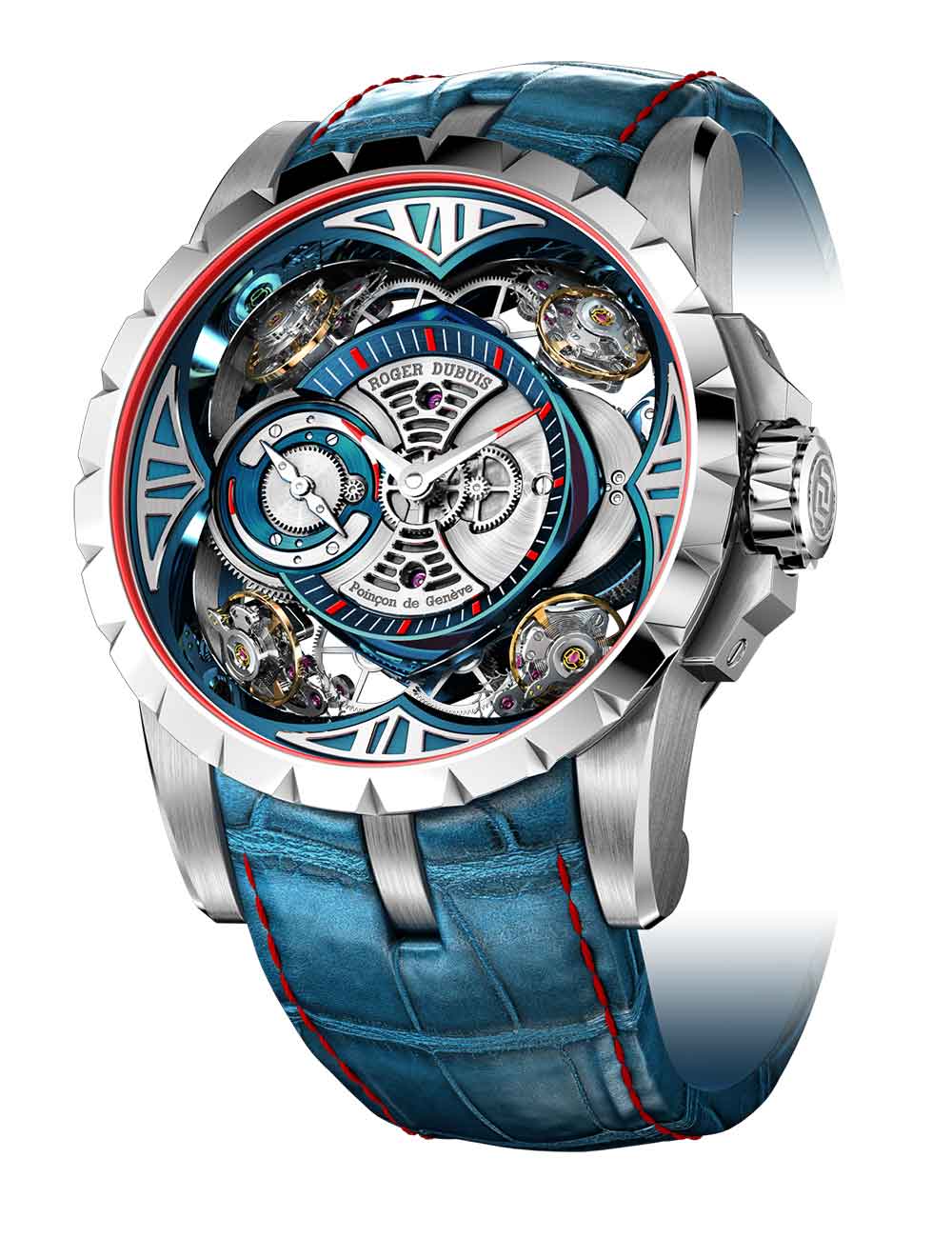 The hand-wound movement designed by Roger Dubuis’ movement developer Gregory Bruttin has remained unchanged. The RD101 Quatuor calibre has four balances, each running at 4 Hertz, 28,800 vibrations per hour (and so Roger Dubuis claims a total frequency of 4 x 28,800 = 115,200 vibrations per hour). The balances are connected by three differentials that average out any differences in rate. (There is another differential for power reserve transmission, and a fifth between the winding stem and the two barrels). The four balances are not synchronized and so this creates the watch’s famous and unique sound.

The power reserve indicator is prominently positioned to the left of the dial. This has a double-ended hand, and two crescents, indicating the power reserve of the two barrels. They discharge together and so there is some logic in having a double-sided hand, even though it’s fundamentally a theatrical touch. What is different about this power reserve indicator is that the base also rotates, 4.25 revolutions per day, while the hand rotates a little more slowly. An unusual concept and one that Roger Dubuis patented. 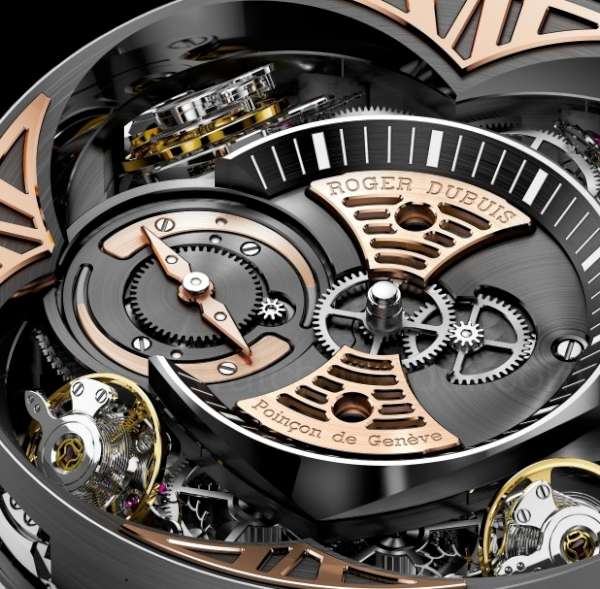 RD101 calibre, detail of the power reserve indicator, from the previous 2013 version of the Quatuor

The watch has a power reserve of 40 hours, 590 components, and a high price tag: 390,000 Swiss francs. The Excalibur Quatuor Cobalt MicroMelt is a limited edition of eight pieces. The first was sold before its presentation at SIHH, when an important customer from China was being given a guided tour of the Roger Dubuis manufacture. Three of the brand’s top watchmakers were working on the new Excalibur Quatuor, and the customer approached to take a look. The manager accompanying the VIP said, “Sir, you shouldn’t be seeing this, it’s a world premier.” The guy from China said, “I want it,” so on the first day of the show, there were seven left.