There are diving watches, and diver’s watches. They are not equivalent terms. Diving watches in general are designed for use underwater and so have a number of specific characteristics, principally water resistance of at least 10 bar/100 metres and a unidirectional rotating bezel. On the other hand, watches that have “Diver’s” on the dial have been tested by an external authority for compliance with ISO 6425. This means extra costs for manufacturers, and so not many watch companies have their watches tested for ISO 6425. Some have their own internal tests and say that their watches surpass the parameters of ISO 6425 (and still use the word “Diver’s” on the dial). All in all, it’s not a situation of total clarity. 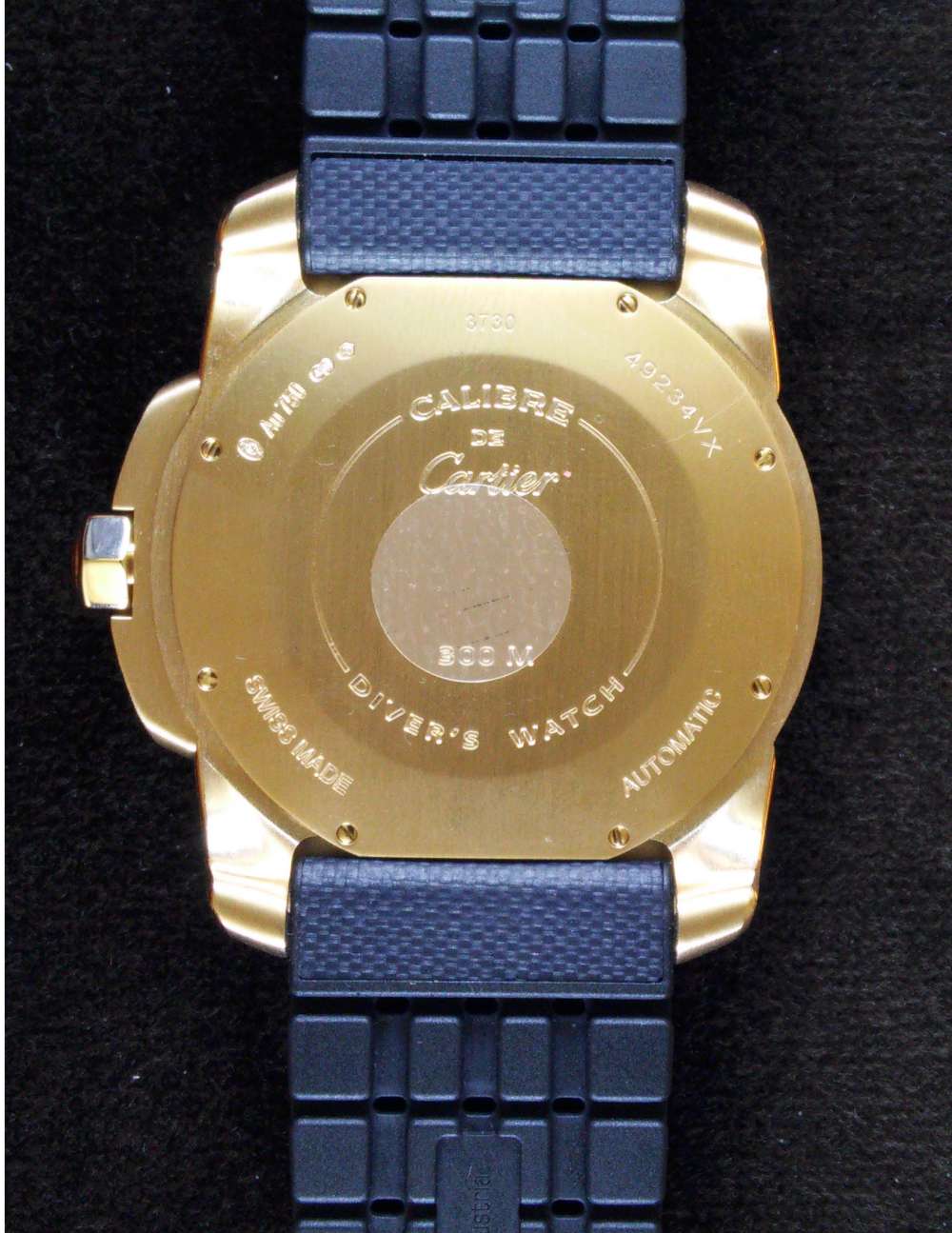 The minimum water resistance for a diver’s watch is 100 metres, but most are rated at 300 metres Differently to normal watches which are tested for water resistance by compression in an air chamber, diving watches are tested in water under pressure. They have other functional characteristics, based principally on the pioneering work performed by Jean-Jacques Fiechter, CEO of Blancpain from 1950 to 1980, and Captain Robert “Bob” Maloubier, which led to arguably the first modern diving watch, the Fifty Fathoms, in 1953. In Robert Maloubier’s words, “Finally there was a small watch company, Blancpain, which agreed to develop our project which imagined a watch with a black dial, large numerals and clear indications using triangles, circles and squares, as well as an exterior rotating bezel mirroring the markers of the dial. We wanted at the beginning of a dive to position the bezel opposite the minute hand so as to be able to read the elapsed time. We wanted in effect that each of the markers be as clear as a guiding star for a shepherd.” 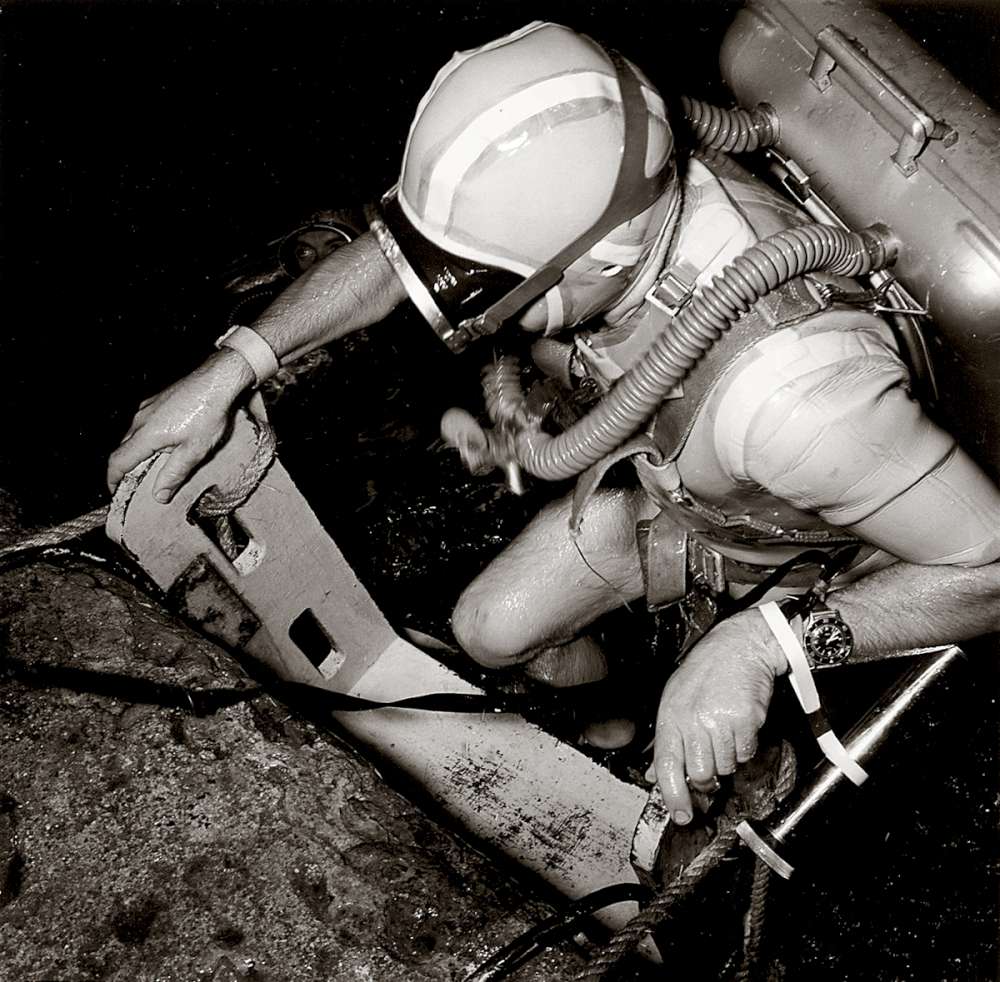 Bob Maloubier during the 50s, photo courtesy of Blancpain

A unidirectional rotating bezel allows the diver to set the zero mark on the bezel opposite the minute hand, so that at any time he or she can read off the elapsed dive time. The bezel can only rotate counterclockwise, so that in case of inadvertent rotation, the displayed dive time can only increase, and never decrease. The first fifteen minutes are often shown with minute markings for increased precision on decompression stops. The minute and hour hands have to be visible in the dark, and visibly different one from another. It should be possible to see that the watch is operating both in normal light conditions and in the dark, generally by means of the seconds hand that is also treated with luminescent paint. 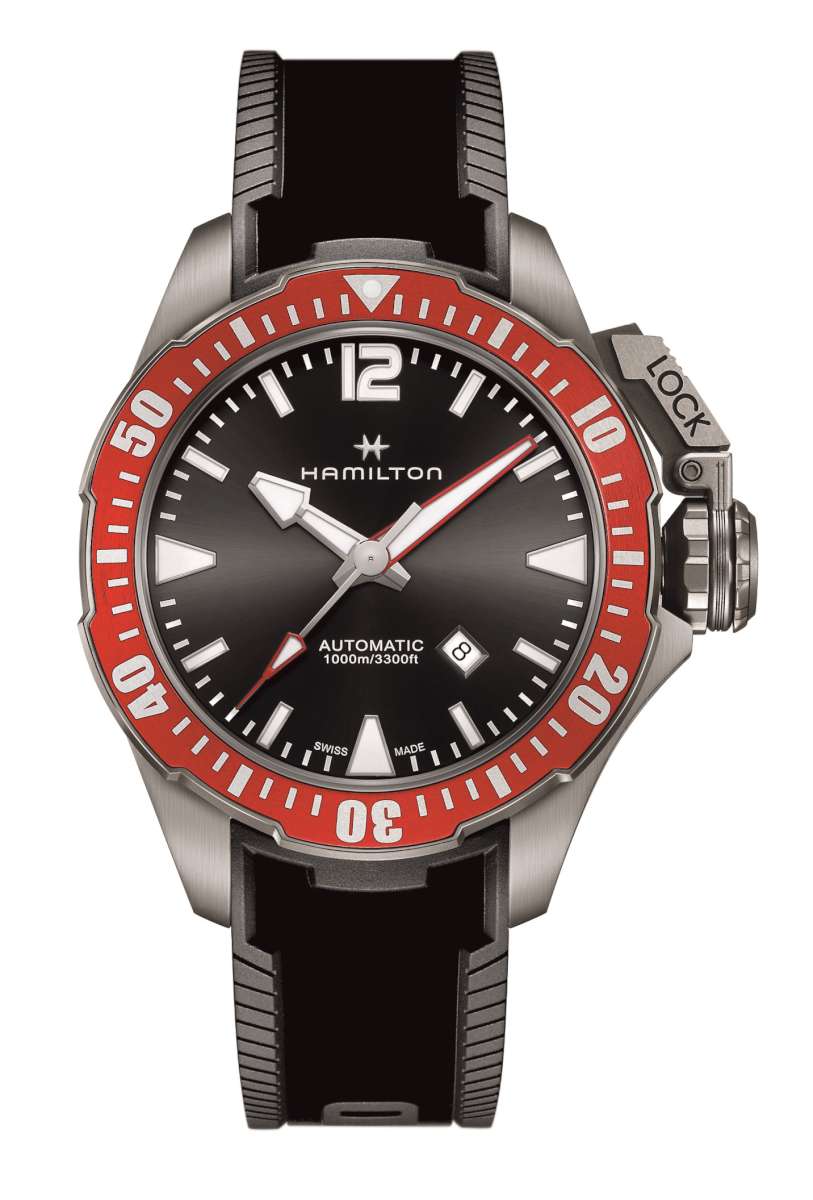 The principal feature of an ISO 6425 diver’s watch is water resistance, that is tested in static water to 125% of the rated pressure. For example, a watch rated at 300 metres is tested to a pressure equivalent to 375 metres.

The tests performed for ISO 6425 certification are:

Reliability under water. The watch is immersed to 30 cm in water for 50 hours at 18-25°C, and all functions have to operate correctly at the end of the test. It is followed by the condensation test, in which the watch is placed on a heated plate at 40-45°C for 10-20 minutes, and then a drop of water at 18-25° is placed on the watchglass, left for one minute and then cleaned off. It sounds rather empirical, but it is the best way of revealing even the slightest infiltration of water into the case, because any humidity inside is transformed into vapour by the heat, and then obediently condenses under the cool drop on the watchglass.

Resistance of crowns and pushers to external force. The watch is subjected to 125% of the rated pressure in water, and a force of 5N is applied to crown and pushers for 10 minutes. The condensation test is performed to ensure that no water has entered.

Resistance to thermal shock. The watch is immersed into 30 cm of water at different temperatures, remaining at each temperature for ten minutes: 40°C, 5°C and then 40 °C again. After this, no water must have entered.

Timing device, i.e. unidirectional rotating bezel. The unidirectionality protects it from inadvertent rotation, so that the displayed dive time can be inadvertently increased, but never decreased. It has to have a 60-minute scale, with 5-minute markings, coordinated with the markings on the dial.

Visibility in the dark. The minute hand, hour hand (clearly distinguishable from the former), and an indicator that the watch is functioning (usually the seconds hand) have to be legible at a distance of 25 cm in the dark.

Magnetic resistance. The watch has to retain an accuracy of up to +/- 30 seconds deviation per day after 3 exposures to a field of 4,800 A/m.

Shock resistance. The watch is subjected to a shock on the side at 9 o’clock, and a shock on the watchglass perpendicular to the face, delivered by a 3kg plastic hammer with a speed of 4.43 metres per second. The watch has to continue functioning with a maximum change in rate of +/- 60 seconds per day.

Resistance to salt water. The watch is immersed into a salt solution corresponding to the salinity of seawater for 24 hours. After this, the case, crown, pushers and rotating bezel are examined to ensure that they are all working correctly.

Strap/bracelet strength. A force of 200N is applied laterally to the two springbars. There should be no visible damage.

In these tests, the watch is tested for operation at gas overpressure. It is subjected to gas at a pressure that is 125% of the rated pressure for 15 days, and the pressure is then reduced to atmospheric pressure in a time not exceeding 3 minutes. The watch has to continue working correctly.

This is not a complete list. For the following watches, the manufacturer states explicitly that the watch has been tested for ISO 6425. However, in many cases the manufacturer does the testing themselves and then describes their watches as ISO 6425-compliant. To take one example, Helm told me, “Regarding the ISO testing, we conduct all the testing in-house in our own test lab, as would most watch brands that manufacture ISO rated watches. Continually sending watches to external test labs would quickly become cost prohibitive. The testing consists of two parts: 100% testing and type testing. The 100% testing covers the water resistance rating; every watch from every production is tested in water for 2 hours at a pressure equivalent to 125% of the watch’s rated depth. The type testing covers everything else (salt water resistance, magnetic resistance, thermal shock resistance, shock resistance, etc.). Only a portion of each production run is subjected to this full battery of tests (because most customers wouldn’t want their watch to be exposed to a magnetic field, put in salt water for 24 hours, dropped twice, etc. before they receive it). If that portion of each production run successfully completes the full test cycle, it’s assumed that the rest of the watches in that production run could also pass the tests.”

On another occasion I met a Blancpain technical director and he hadn’t heard of ISO 6425. I was surprised because Blancpain was the brand that, as mentioned above, did a lot of work on defining the characteristics of a diver’s watch. I have the feeling that, as mechanical diving watches have been supplanted by electronic dive computers, even a professional mechanical diver’s watch is going to be a back-up at best, and so manufacturers simply test all watches in water under pressure for water resistance, followed by the condensation test to verify that no water got in, and then test a few samples for the other ISO 6425 parameters, all internally. So the watch becomes ISO 6425-compliant, not certified

Panerai also make reference to ISO 6425, such as for the Panerai Luminor Submersible. The brand says that the watches “exceed ISO 6425,” but testing is probably entirely internal. They are marked “Divers professional” on the caseback. 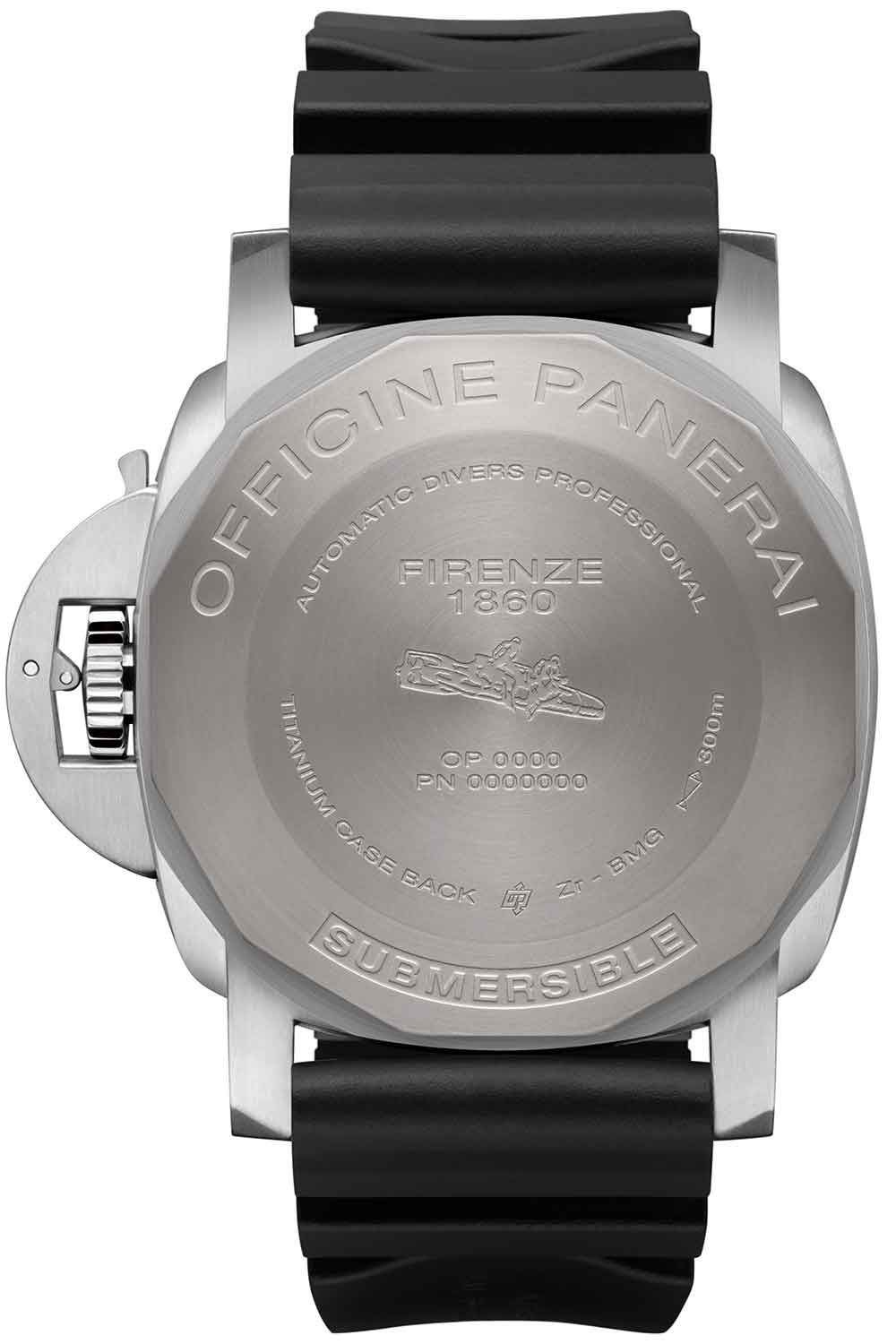