Hautlence is dedicated to making watches that tell time in a different way, as in this piece, Vortex Bronze. The Vortex was first presented in 2015 in a titanium case, and at SIHH 2017, Hautlence presented a new edition of 8 pieces in bronze. It has the same innovative HL2.0 movement, and similar case architecture. 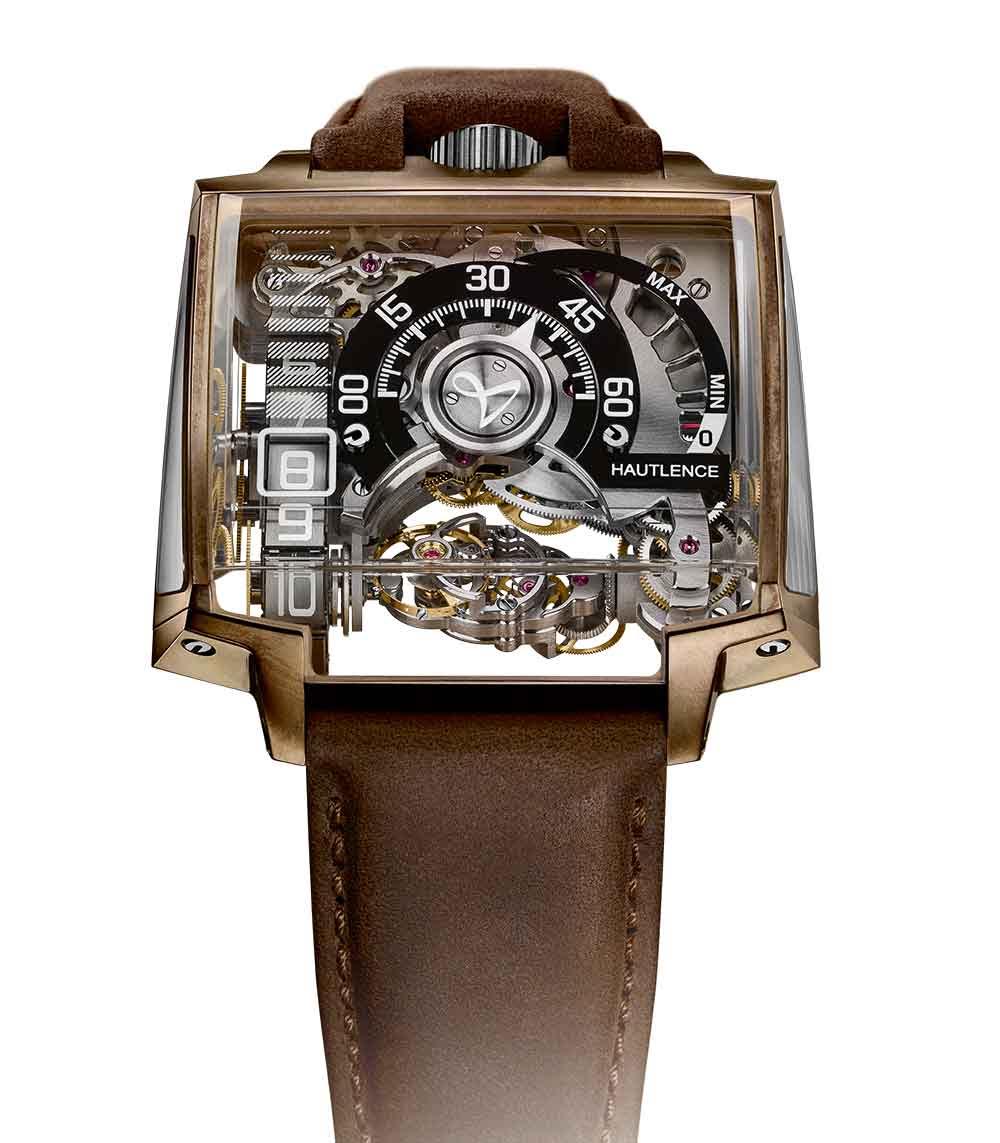 Balance assembly rotates once an hour

It’s a lovely concept. The hours are shown by a belt with numbers on the left, and every hour, the movement advances the hour by one numeral, and at the same time, the balance assembly at the lower edge – visible through the sapphire glass that at this point forms both the top and side of the case – rotates through 60 degrees. So it’s a concept similar to the tourbillon, though in this case it’s more of a theatrical feature. In the new Vortex Bronze, the balance is in clearer view than in the 2015 version shown below, without the central belt. But the video below gives an idea of the hourly performance.

The minutes are shown by the white arrow, which is retrograde. At the end of each hour it returns to zero. At the centre of this display is the Hautlence logo on a circular disc, that acts as a governor, regulating the speed of the animation that occurs every hour. So while the hour is changing, the disc spins around fast, and this slows the hour change to a process of about 4 seconds. There are two mainsprings, one for timekeeping, and one powering the hourly performance. The hour and minute numerals are coated in SuperLuminova. 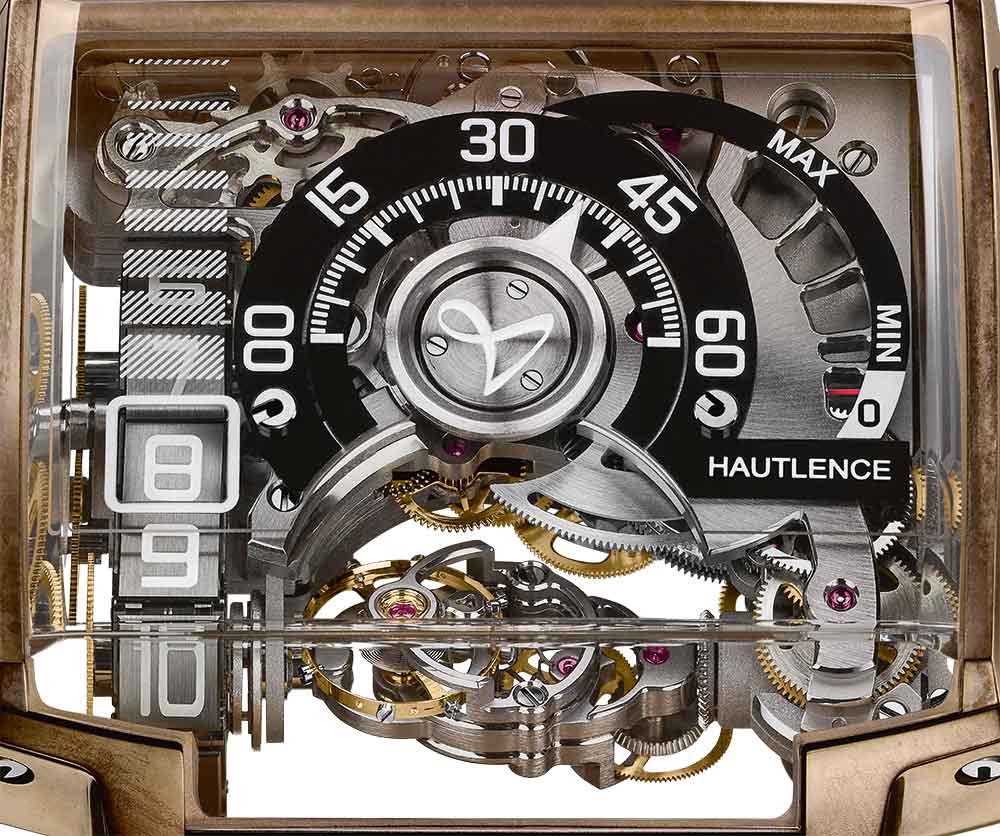 There are sapphire windows on the sides of the watch, and on the caseback, where you can see the white gold micro-rotor powering the self-winding movement. Power reserve is 40 hours, shown on a power reserve indicator to the right of the minutes dial. The case, a complex, architectural construction with 6 sapphire crystals, is very large at 52 x 50 x 17.8 mm. This is never going to be an everyday watch. The movement has 482 parts, and the balance runs at 18,000 vibrations per hour, 2.5 Hertz.
The watch has three strap alternatives, black alligator with rubberized treatment, or brown calfskin, or black rubber. All three are provided, along with a screwdriver used for changing them. They have a folding clasp. The image below shows the side view of the previous titanium version. 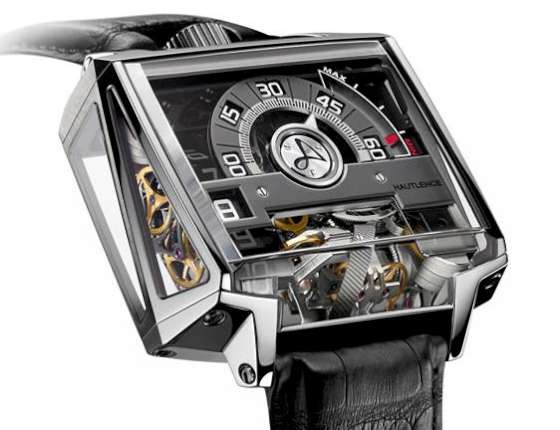 The Hautlence Vortex bronze costs 170,000 Swiss francs inclusive of tax. It is a limited edition of 8 pieces. See more at the Hautlence website. 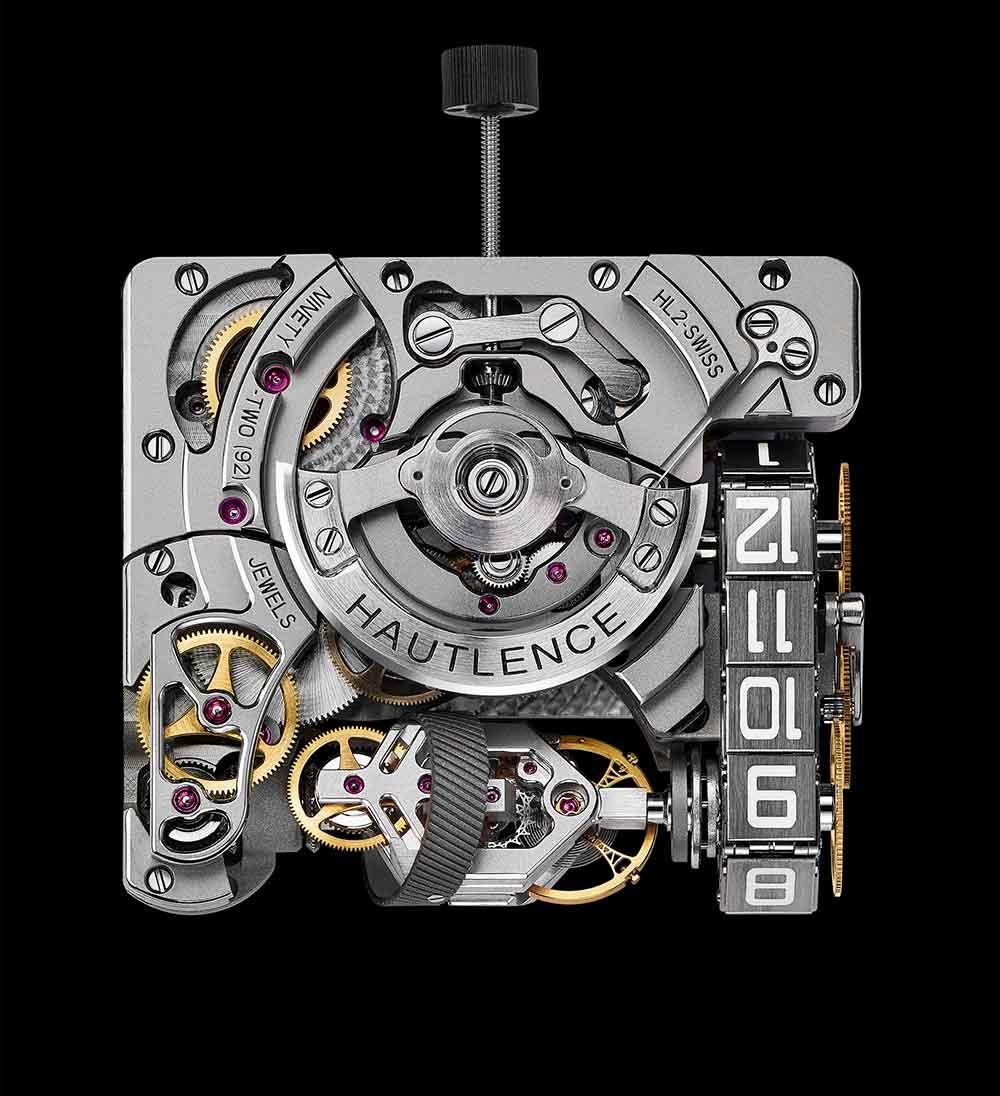