The Moon Orbiter GMT by Romain Jerome is a new version of a watch first launched in 2015. Back then it was a very unusual watch, with a rectangular case and lugs with spring-loaded shock absorbers. This new version, presented in 2016, is a bit more conventional in appearance, with a circular case. The extra space is dedicated to the GMT function with day-night indicator at the top, and a larger area for the power reserve indicator at the bottom. These two indicators have a satisfying symmetry The case is still in steel, 48 mm in diameter, an alloy containing some fragments of the Apollo 11 space craft. In the image below, the Romain Jerome Moon Orbiter 2014 on the left, and the Romain Jerome Moon Orbiter GMT 2016 on the right. 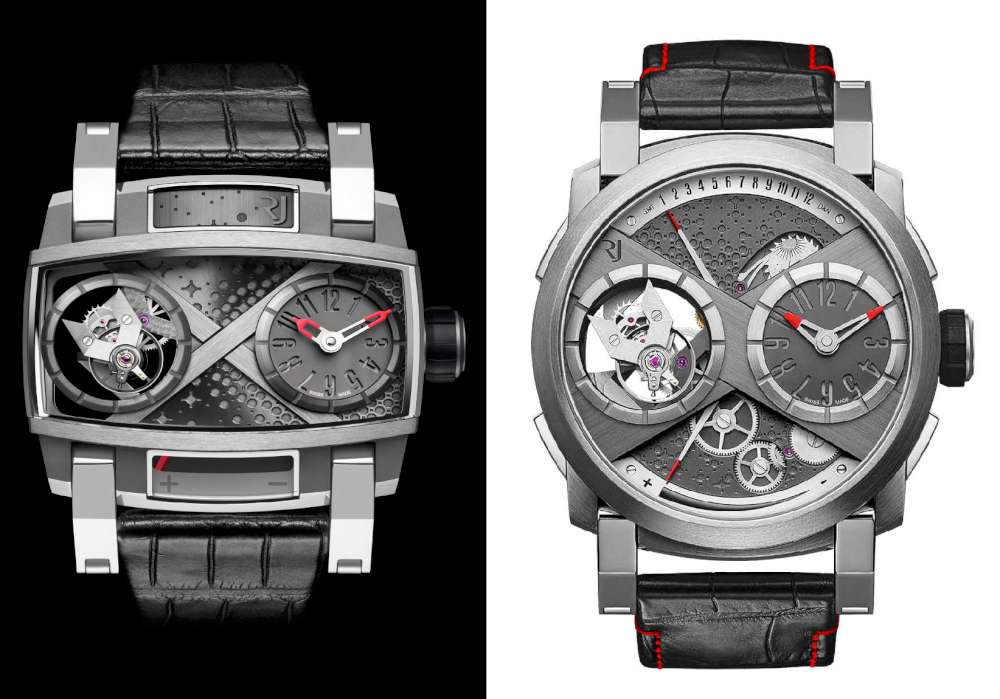 As in the previous version, the Moon Orbiter GMT has a movement built by La Joux-Perret; the overall watch design is by Romain Jerome, and more specifically by Manuel Emch, who is also CEO of the company. The space theme is reinforced by the material used for the oscillating weight visible through the sapphire caseback, made in low-rate oxidation silver in an alloy that Romain Jerome call Moon Silver and that contains some moon dust. The lugs are fantastic, pivoted and with shock-absorber-type pistons that are spring-loaded. This makes this very large watch more wearable. 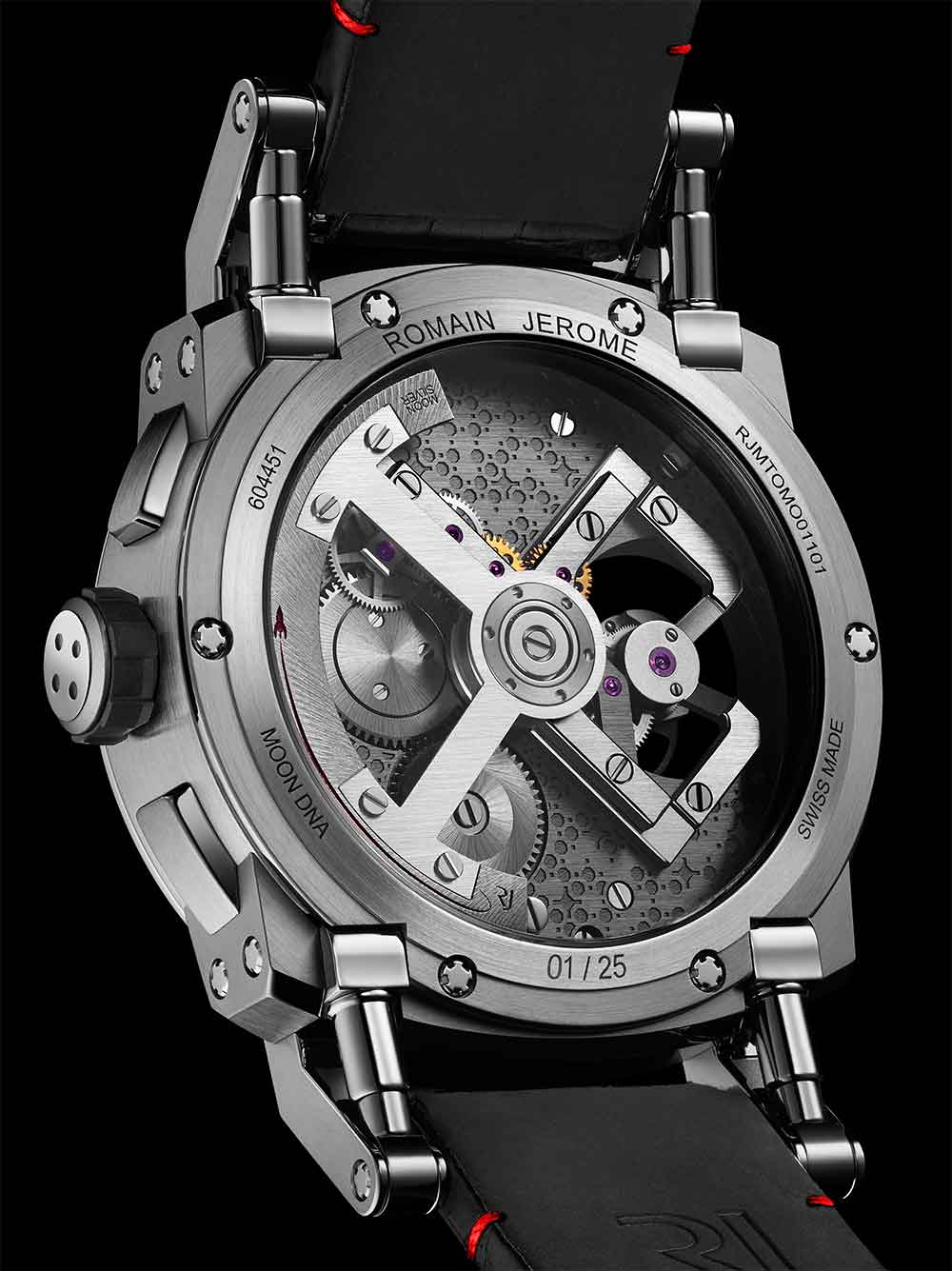 The dial has the X-shaped architecture that appears in many Romain Jerome watches. Below this, the dial is engraved with a pattern that at first glance looks like craters, but from closer up is more like stars. A very nice touch on the case is the way that the X-shaped bars seem to emerge from the caseband, with one tip, at 2 o’clock, which is in actual fact the pusher to adjust the GMT indicator. The tips of all the hands are red, coordinating with red stitching on the alligator strap. 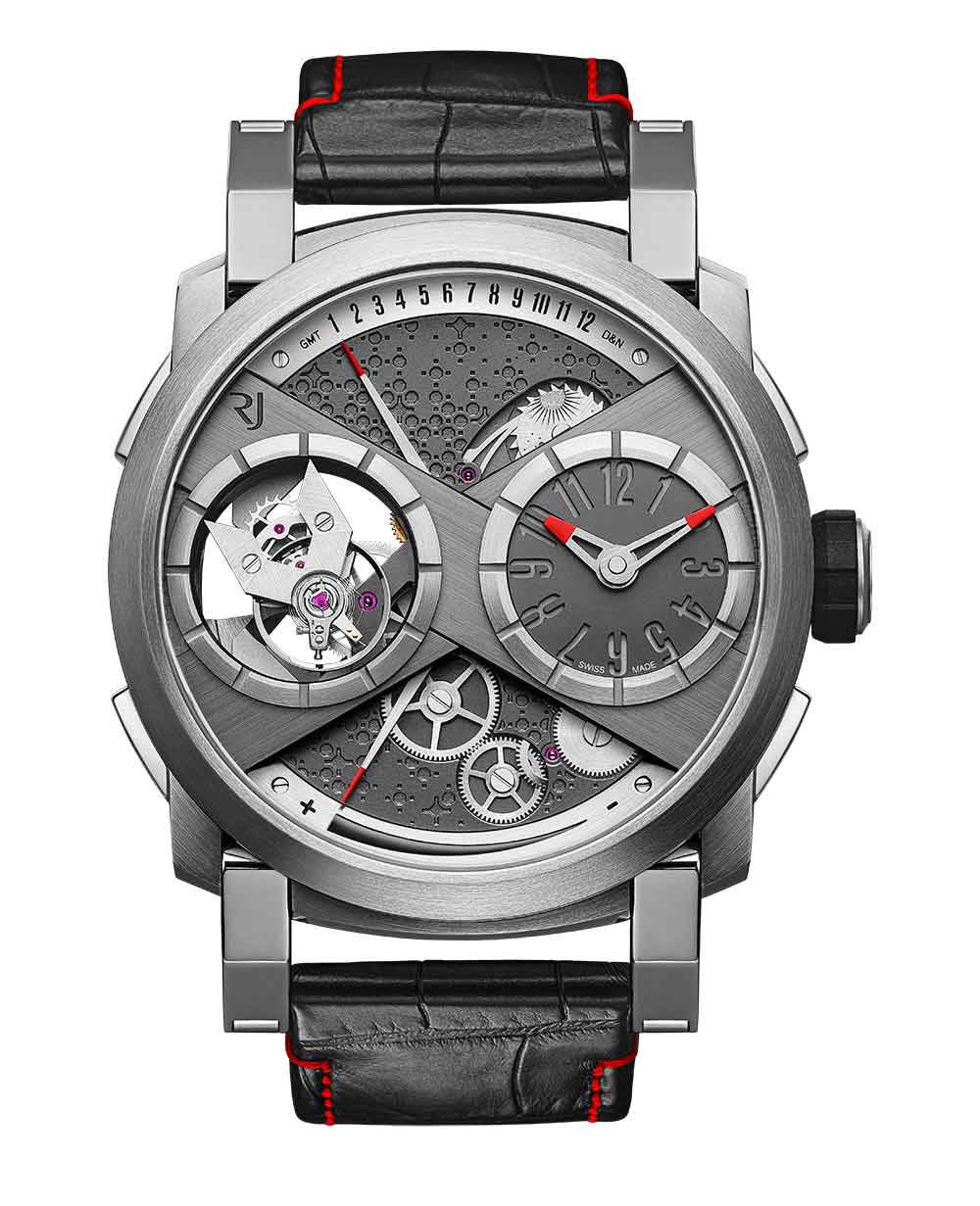 The movement is the RJ7813L calibre, self-winding, with 45 hours power reserve. It runs at 28,800 vibrations per hour, and the balance is visible in the flying tourbillon with its Enterprise spaceship-style bridge that rotates once a minute.