The Baume & Mercier Shelby Cobra Limited Edition reference M0A10344 is a flyback chronograph and a tribute to the Shelby Cobra Daytona Coupé car. It’s a good-looking piece, undoubtedly the most distinctive watch in Baume & Mercier’s 2017 collection. Like previous versions of the flyback chronograph in the Capeland series, this watch is fairly expensive at 7,100 Swiss francs, but I’m pretty sure that it will sell out quickly considering that it’s limited to 196 pieces. 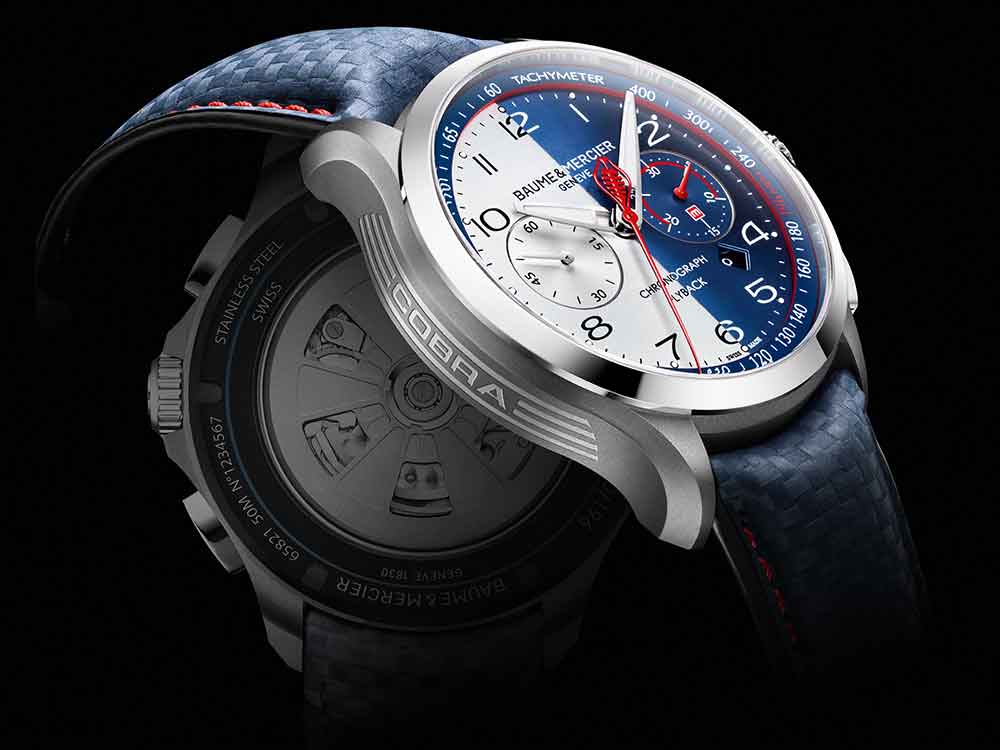 The Shelby Cobra Daytona Coupé is a racing car built by AC Cars and Shelby Automobiles in 1964, with design by ex-General Motors designer Peter Brock. Brock had found some 1930s documents on aerodynamics by German engineer Wunibald Kamm, and even though he couldn’t understand the text, he saw that the drawings showed that a cut-off rear reduced drag to a higher degree than the teardrop shape that at that time was considered as the most efficient. This led to the shape of the Shelby Cobra Daytona Coupé, a car that is not unlike the E-type Jaguar except for its chopped tail.

Six of the Daytona Coupé were built, with the half blue, half white tail – originally an idea by Brock to enable the car to be easily recognized in races – that features on the new flyback chronograph by Baume & Mercier. Along with its good racing performance, winning at Le Mans in 1963, the car attained 196 mph (315 km/h) on the Mulsanne straight on that track. 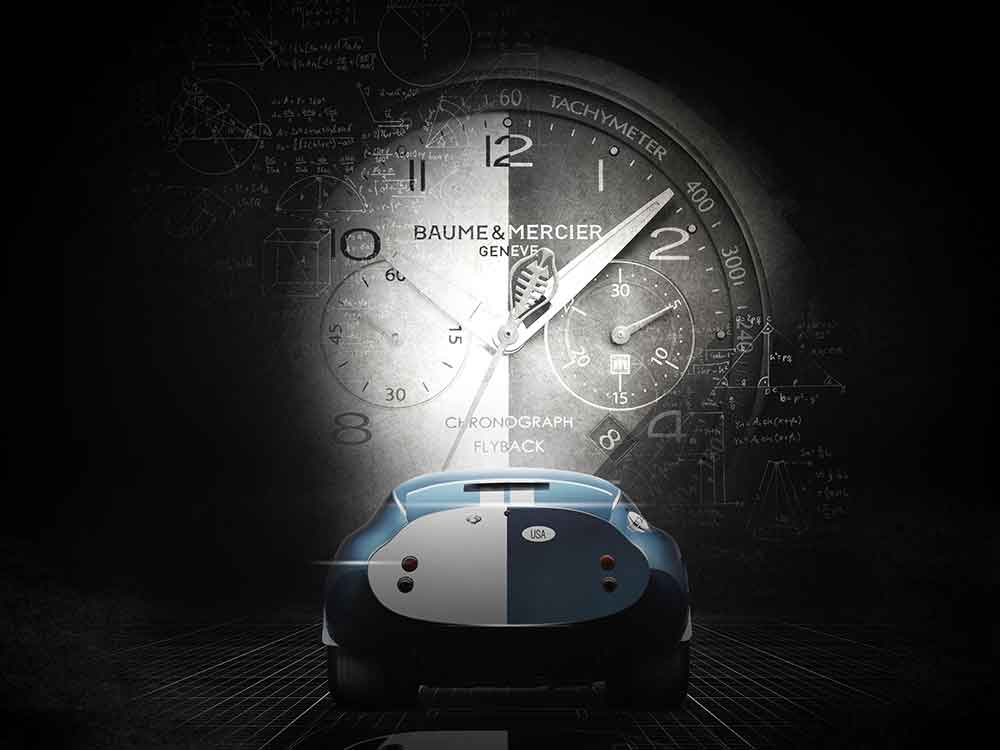 The Clifton Club Shelby Cobra M0A10344 was designed by Alexandre Peraldi, Design Director at Baume & Mercier, with Peter Brock himself, who said “There are thousands of watches out there, so you have to find those features that make it instantly identifiable.” They succeeded, taking features from the car and using it to give the watch its character. The 44 mm case in polished/satin finish steel, or steel and titanium, has a sweeping, aerodynamic shape, with engraved lines and the Cobra name on the caseband, a detail from the car’s engine. Water resistance is 5 bar, about 50 metres. The blue-white dial is based on the Daytona Coupé’s colour scheme, and it includes the 196 mph speed on the tachymeter chapter ring. The chronograph seconds hand incorporates the Cobra logo. The pushers are based on the car’s pedals, and the oscillating weight mirrors the wheels. The strap is in calfskin with a carbon-like finish, neatly profiled to eliminate the gap between strap and case; its reverse is in rubberized black calfskin. It has a triple folding clasp with security pushers. 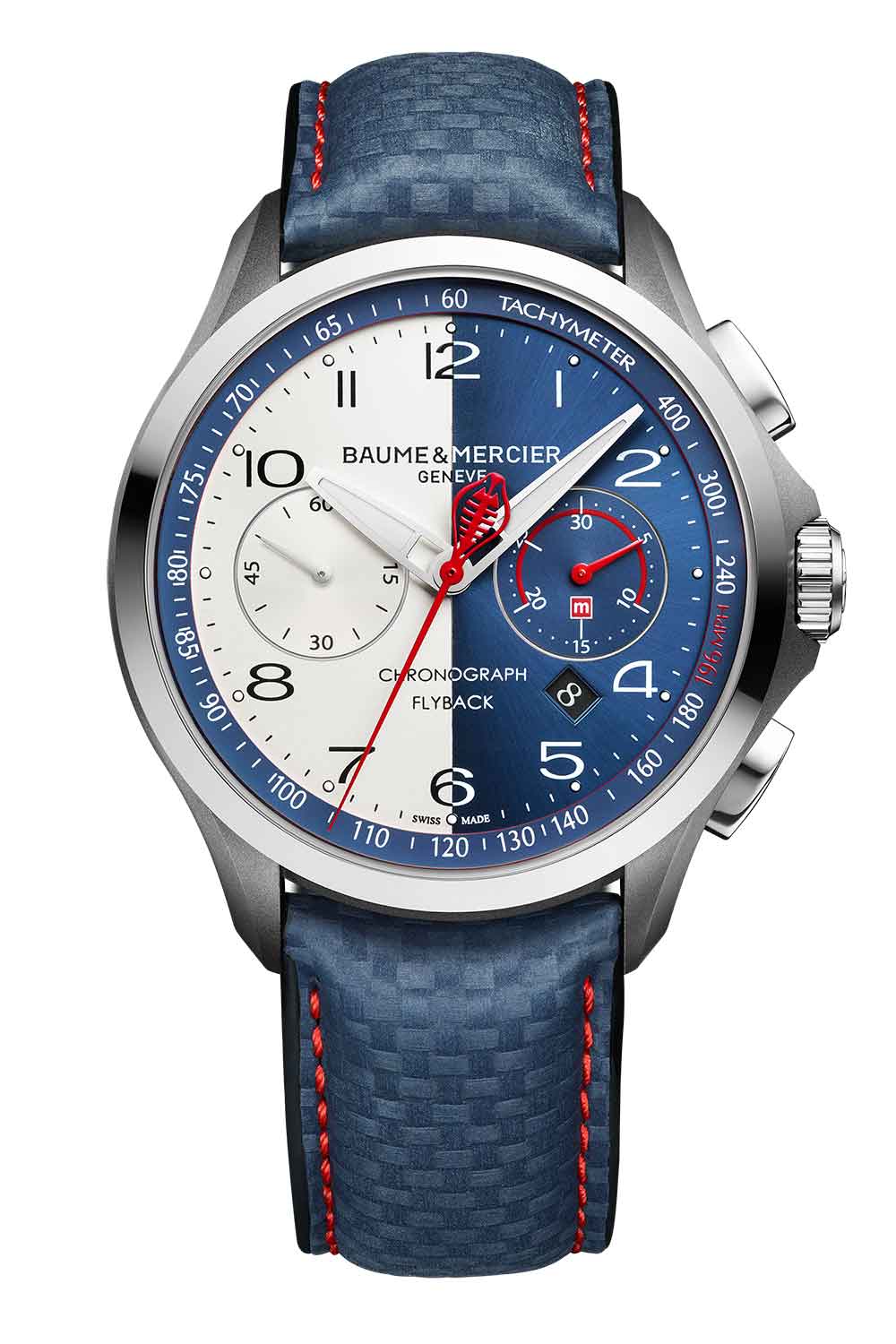 The watch is powered by the La Joux-Perret 8147-2 self-winding movement, based on the ETA Valjoux 7750, and a tried and tested calibre, part of the Baume & Mercier Capeland Flyback watch since 2011. It has the flyback function so that when the chronograph is running, a push on the reset pusher immediately returns the chronograph hands to zero and restarts it. The movement runs at 4 Hertz, and has a power reserve of 42 hours. The movement can be glimpsed through the oscillating weight. On the dial, the calibre drives the continuous seconds subdial at 9 o’clock, and the 30 minute chronograph minutes counter, labelled “m,” at 3 o’clock. The watch also has the date function, with a window positioned a bit uncomfortably, diagonally on the dial. 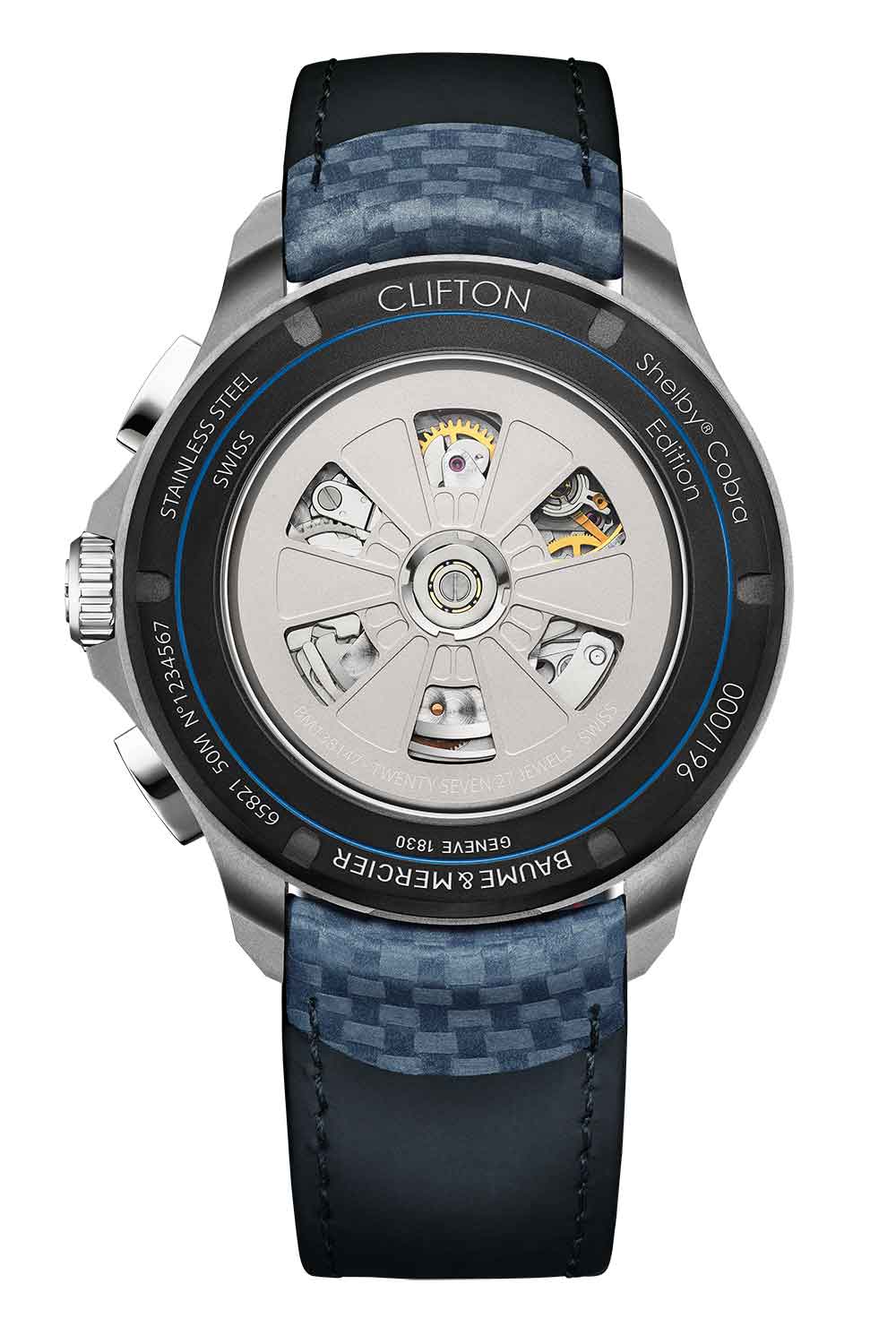 The watch is delivered in a box that includes a model of the Shelby Cobra Daytona Coupé, with a card signed by Peter Brock. The Clifton Club Shelby Cobra M0A10344 is a limited edition of 196 pieces, each engraved with the edition number. The watch costs 7,100 Swiss francs, $7,950. Available from April 2017. Read more at the Baume & Mercier website. 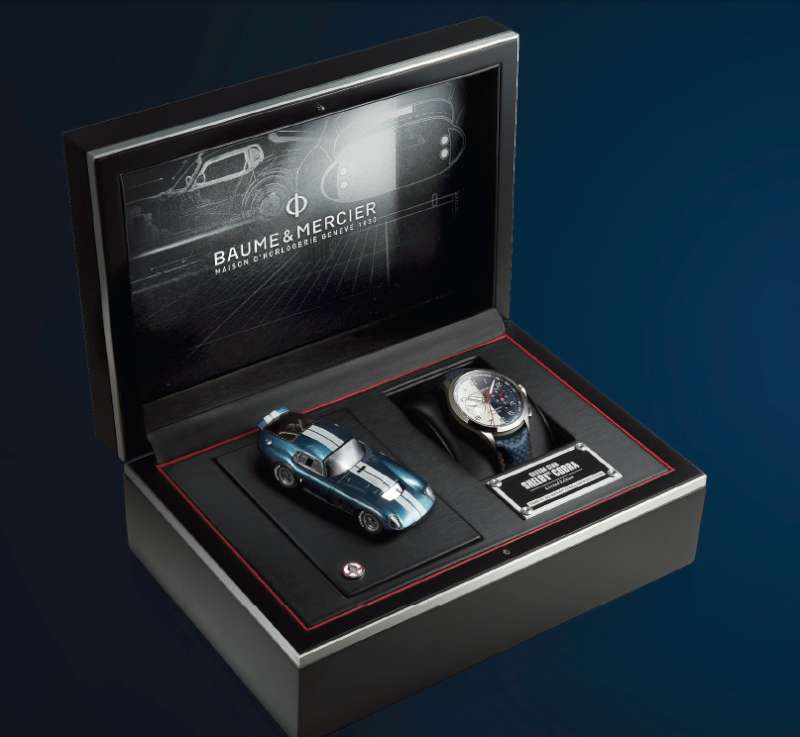