In-house. The capability of designing and building a mechanical watch movement is becoming increasingly important in watch marketing. There are different degrees of “in-house,” starting from companies such as Rolex and Jaeger-LeCoultre which make just about everything themselves, to others that design and assemble their own movements but buy some of the components from specialist suppliers. Having the capability to design your own movement gives more space for innovation and new functions. The Oris Artelier Calibre 113 is a good example, with an innovative calendar showing day, date, week and month. 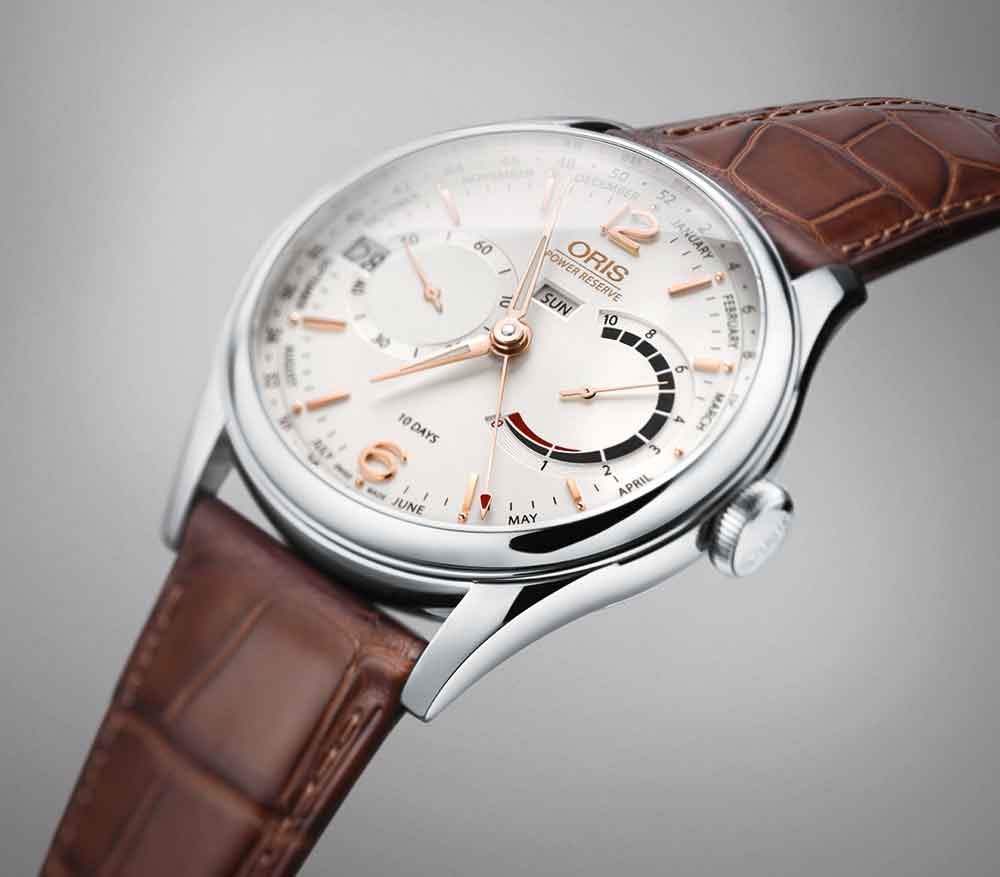 Oris was founded in 1904 and by 1980 it had created 279 calibres in-house. The quartz crisis changed everything, and they returned to making their own movements only in 2014, launching Calibre 110 (marking the brand’s 110th anniversary). This was followed by Calibres 111 and 112, and now 113. Calibre 113 is built on the basis of Calibre 110, with a 10-day power reserve, a patented non-linear power reserve indicator, and a subdial for continuous seconds. Ten day’s power reserve from a single barrel is exceptionally good: Oris achieve this in part through the 3 Hertz balance frequency (21,600 vibrations per hour), but above all through the mainspring, which has the incredible length of 1.8 metres, almost 6 feet! That long strip of metal gets wound into a spiral that fits into a barrel that looks like it’s about 22 mm in diameter. Oris have succeeded in managing the change in torque from when the mainspring is fully wound to when it is at its tenth day of power reserve. Presumably the same system of torque management generates the power reserve indication, which is similarly variable, with a more spacious scale at the bottom end, corresponding to the last couple of days. 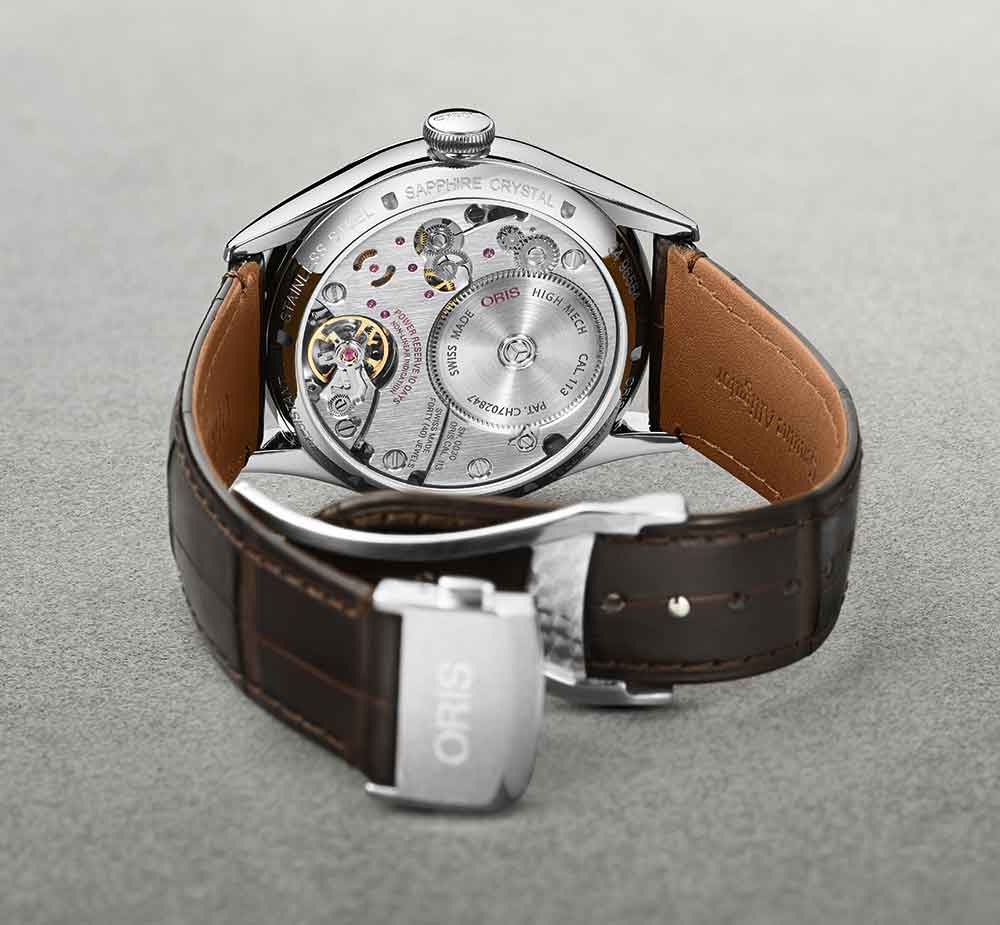 An extra function by means of a simple, effective concept

The idea of a calendar with weeks and months around the edge of the dial is typically Oris. It’s the concept that provides the added value and sets the watch apart. It makes the dial busier than the Calibre 110 but it’s still clearly legible, with its own distinctive style. All the time, date and winding functions are performed using the crown. Hour and minute hands have a coating of SuperLuminova. 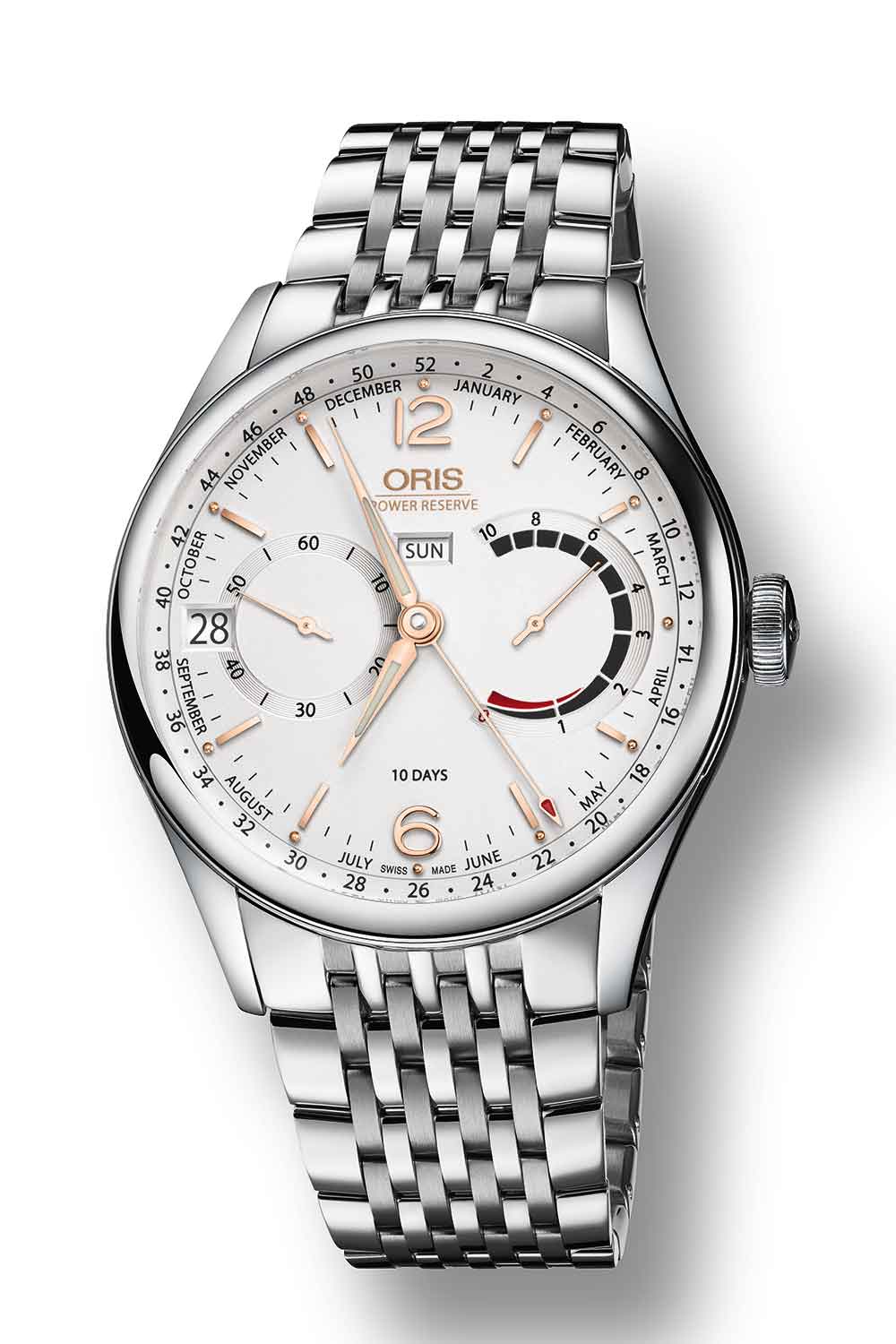 The watch is 43 mm in diameter, in stainless steel, water resistant to 5 bar. The sapphire caseback reveals the movement, which has a simple finish based on brushed metal surfaces. This no-frills finish reflects Oris’ commitment to making watches that ordinary people can afford. 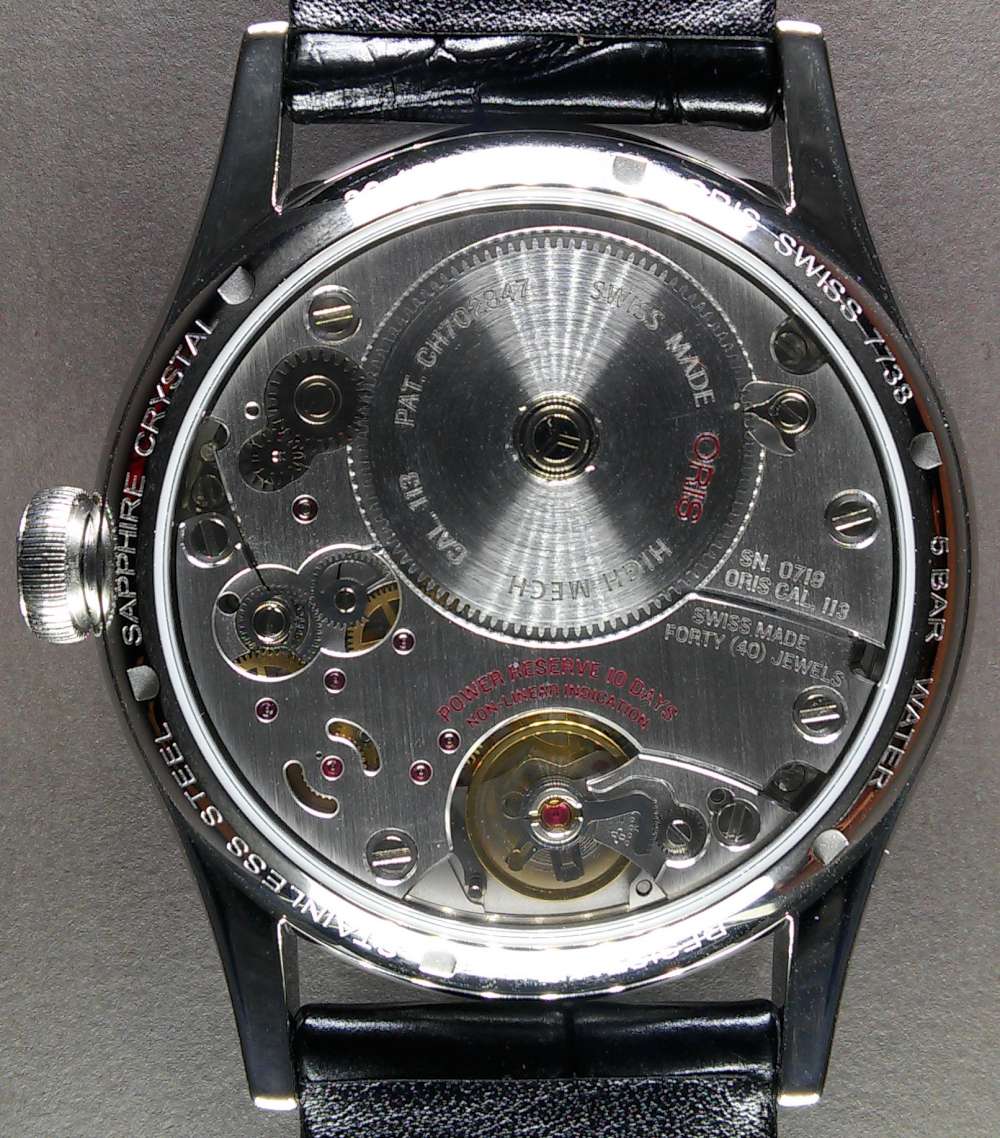 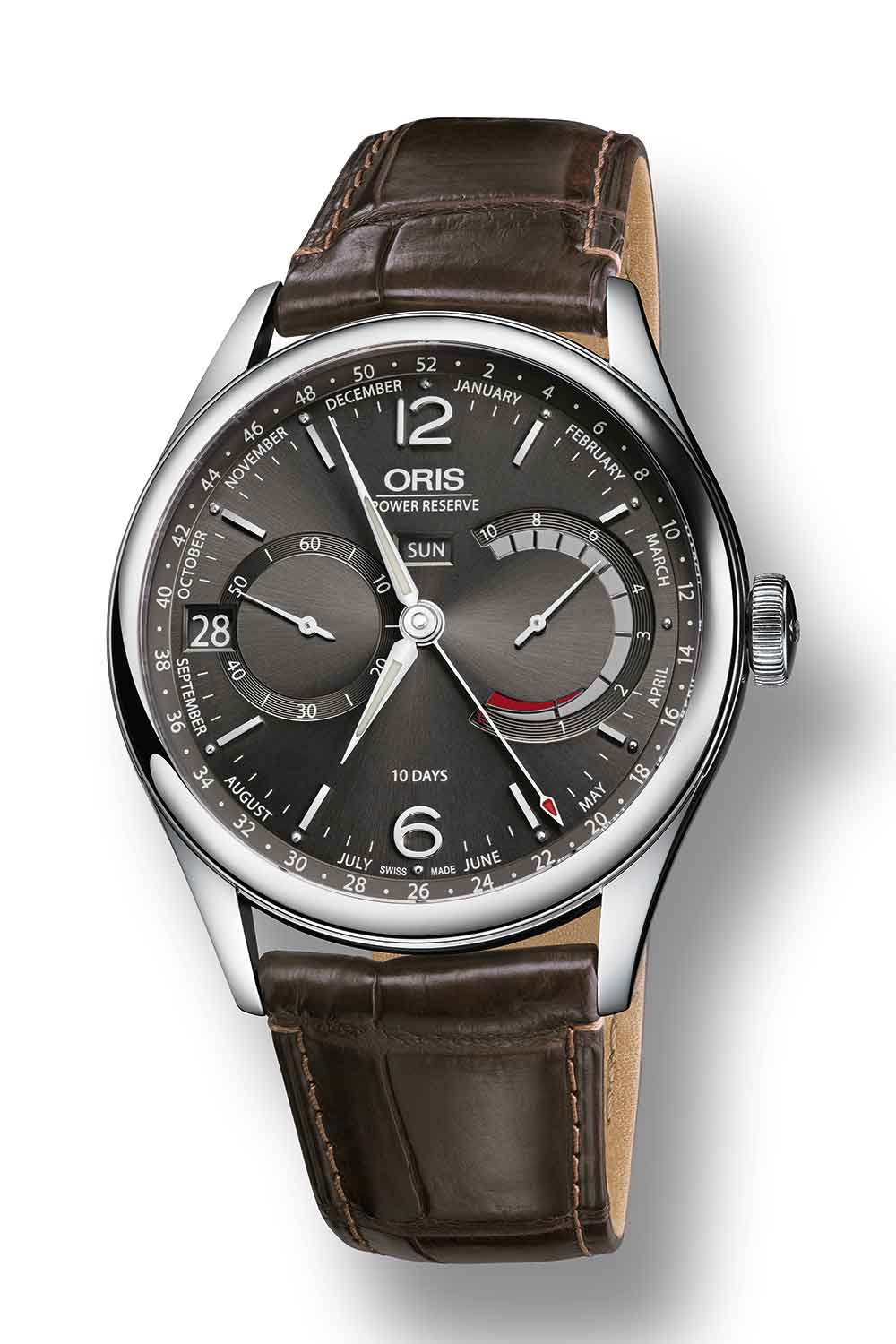 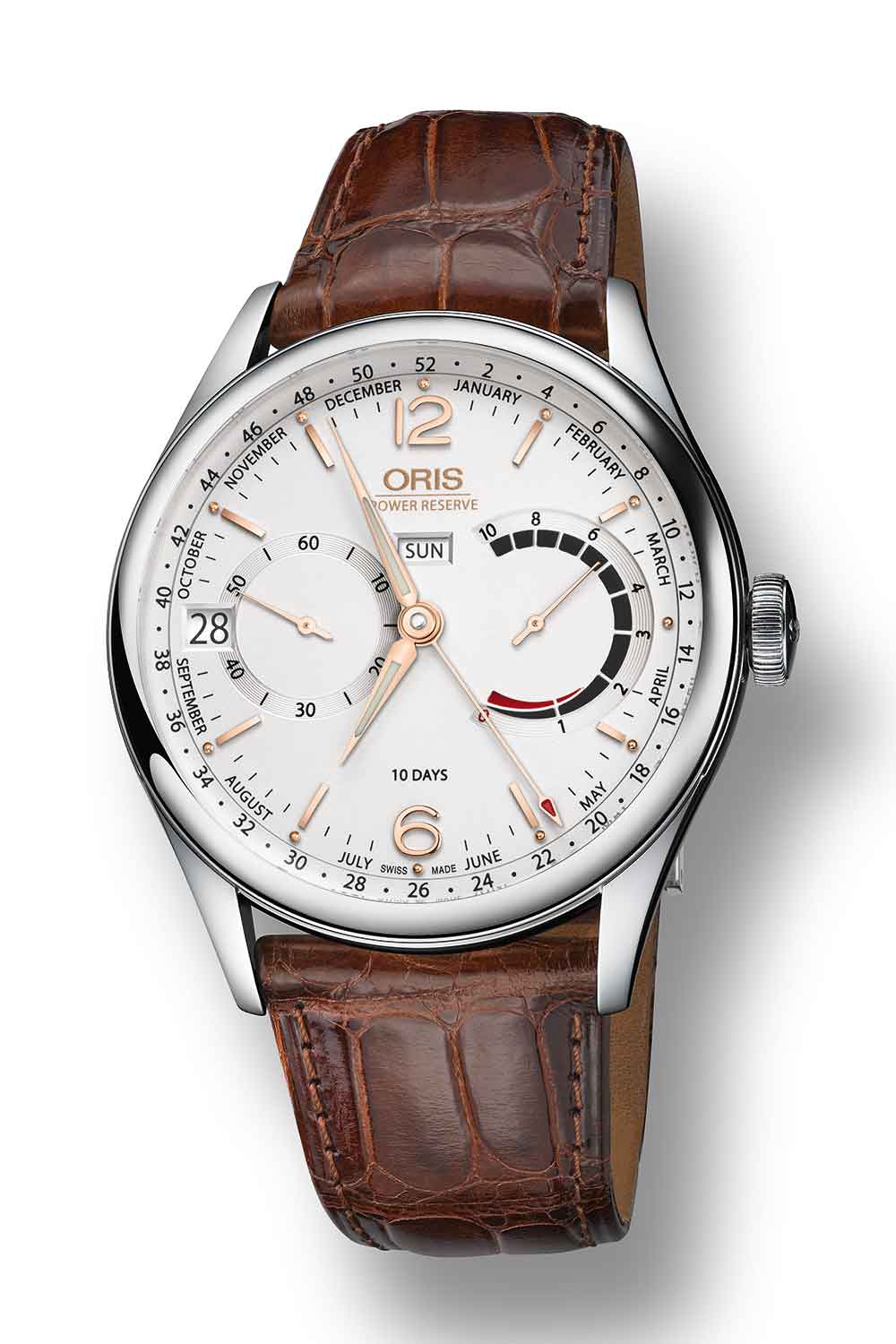