The Tudor Heritage Black Bay Chrono, the first chronograph in the Black Bay family, has an unusual appearance, with elements recalling both motorsports and diving. The watch has a 41 mm case, with a circular-brushed steel bezel engraved with a tachymetric scale, so that you can read off speeds by timing a unit mile or kilometre. The domed, matt black dial has hollowed subdials for continuous seconds and chronograph minutes, and the latter is marked for a 45-minute duration. This derives from the early days of motor sports, when cars and drivers had to be ready on the track 45 minutes before the start of the race. 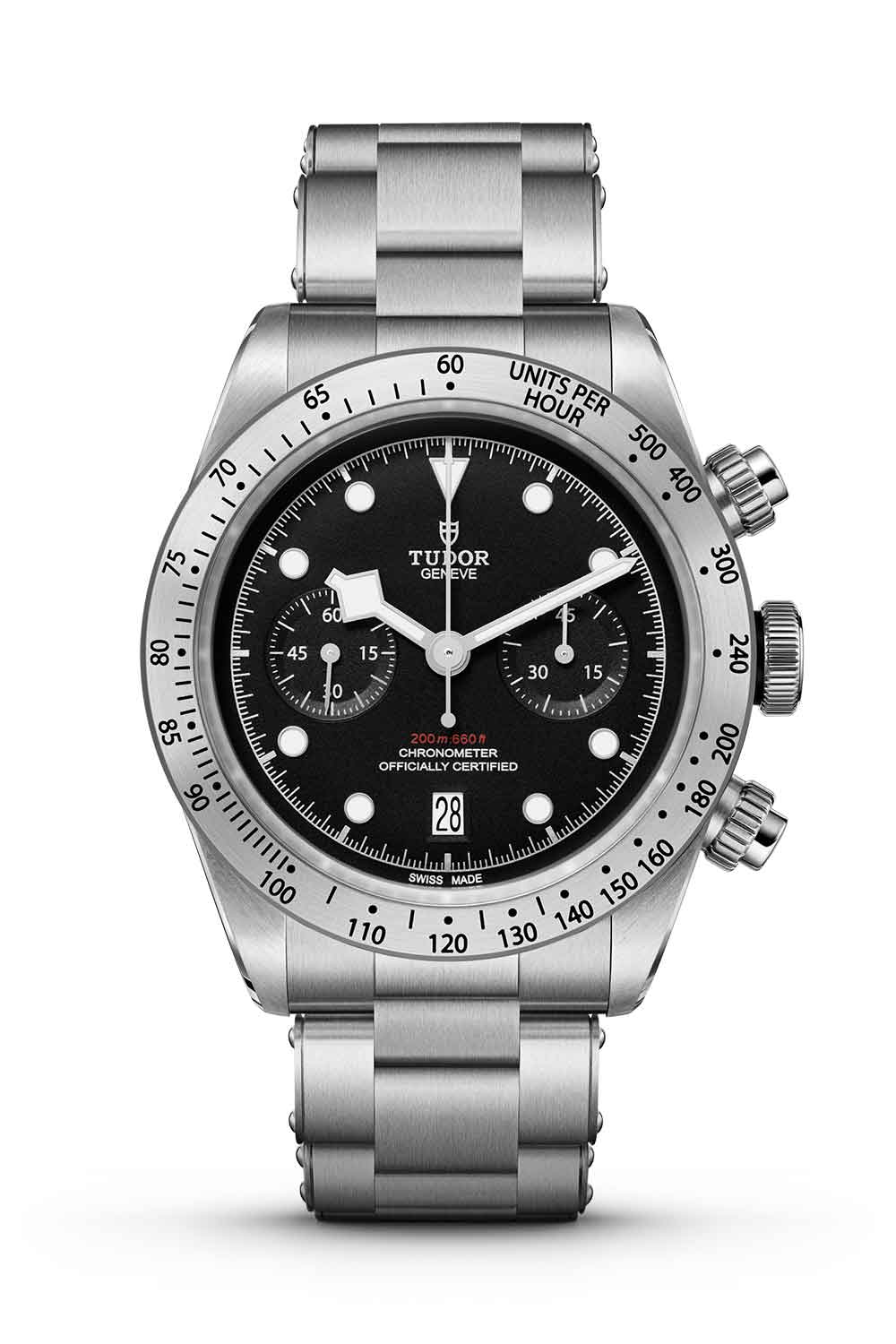 The hour hand has the characteristic Snowflake design, a feature of Tudor watches since 1969. There is a date window at 6 o’clock, nicely integrated into the overall layout because the white square background becomes like another hour marker. The pushers are a new design, with fluting that recalls watches made for the French Marine National and the U.S. Navy by Tudor, and they are a result of direct feedback from Tudor collectors who were asked what sort of pusher design they would like to see on the new timepiece. The Heritage Black Bay Chrono has a 200-metre water resistance and so it is perfectly at home underwater (it’s not clear whether you can use the chronograph pushers underwater or not). 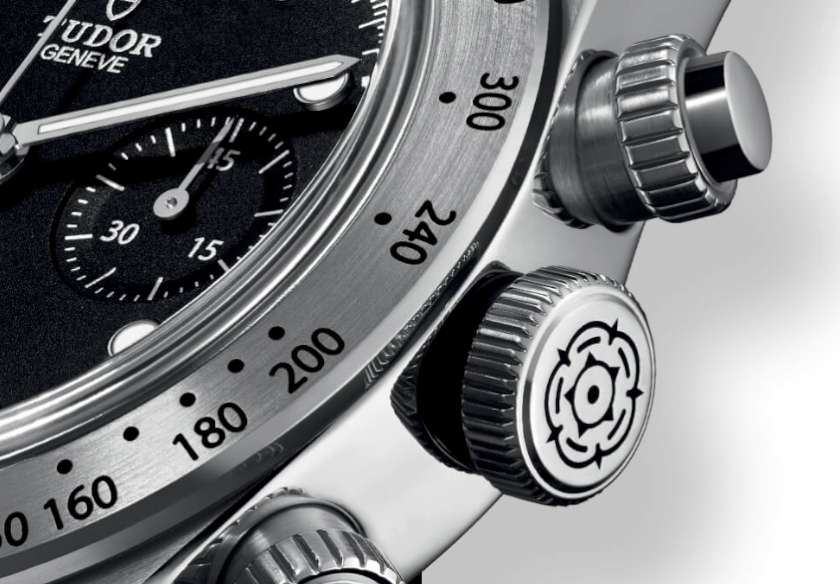 Its characteristics put it squarely into the sports watch area that is becoming increasingly crowded – watches with some diving characteristics but that are intended for a wider field of action. In this piece, the only thing that sets it apart from true diving watches is the fact that it doesn’t have a unidirectional rotating bezel. Hands and hour markers are coated in luminescent paint for legibility in darkness, and even the seconds hand has a circular counterweight with lume, so that you can see that the watch is working in the dark (another dive watch hallmark). 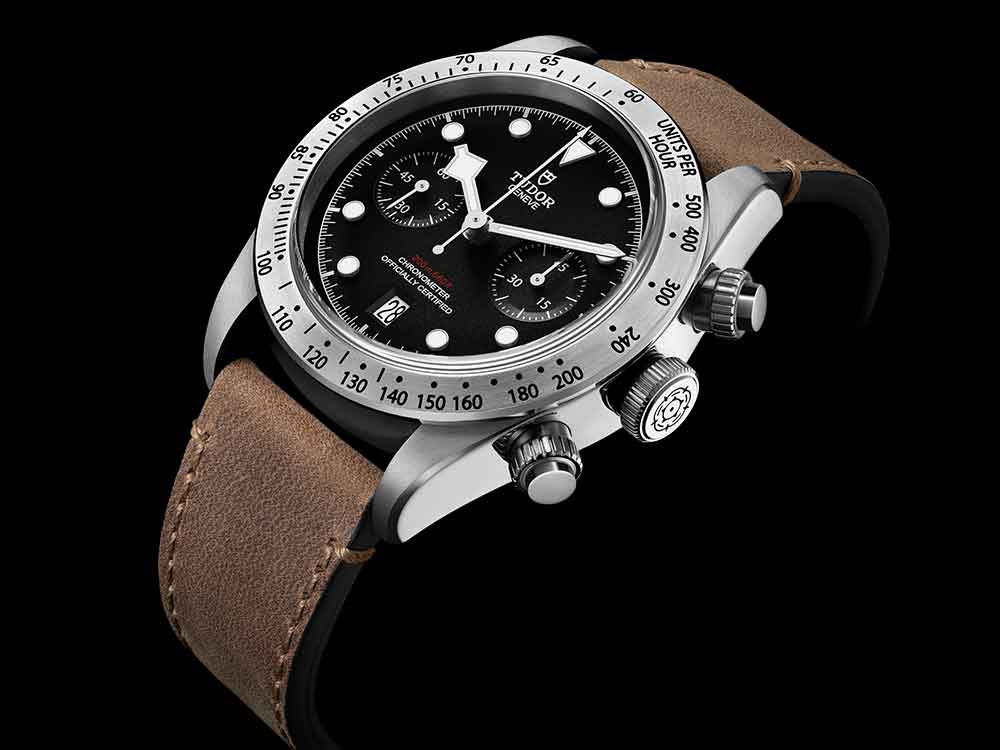 The watch also reflects current trends, in that the strap can be changed. It is supplied with either a steel bracelet, or a leather strap, together with a complimentary jacquard denim strap. All three have been carefully designed. The steel bracelet has “riveted” terminals on the side, another reference to 1950s and ‘60s Tudor watches, while the bracelet itself has solid links, differently to those earlier models in which they were hollow. The brown leather strap has a surface nap so that it is darker or lighter depending on which direction you smooth it. It has a folding clasp. The extra fabric strap is woven on 19th century jacquard looms in France. It is both hard-wearing and soft against the skin, and has a buckle. 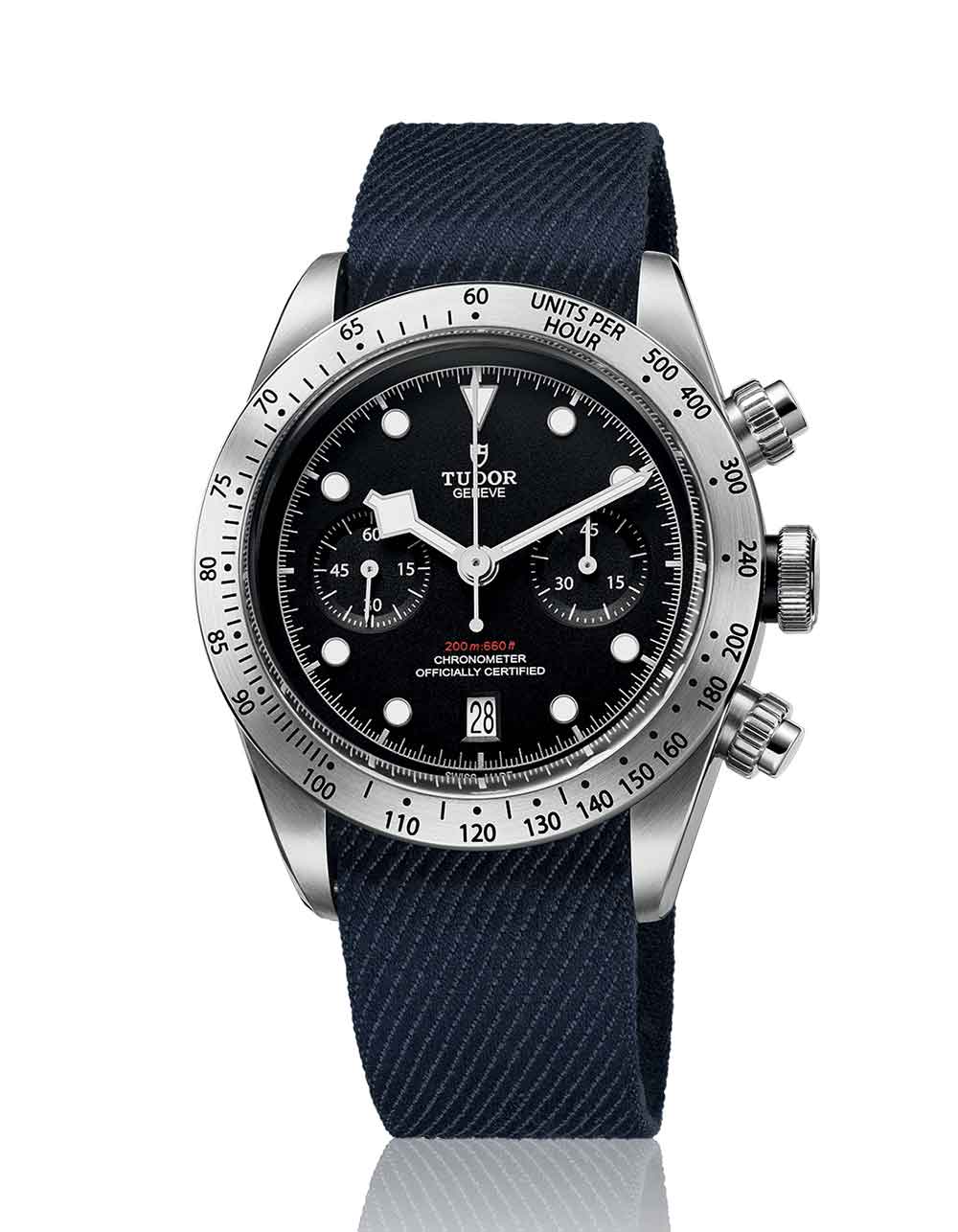 Chronograph movement made by Breitling

The real surprise of the Heritage Black Bay Chrono is inside. The movement is the “Manufacture” Tudor calibre MT5813. Watch brands use the word “Manufacture” to indicate an in-house movement, and in this piece the calibre isn’t made in-house, but it is supplied by Breitling. But all is forgiven, because Tudor very candidly say that the movement is made by Breitling as part of the recent agreement of collaboration in which the two brands are supplying each other with movements. The Breitling chronograph movement (it is derived from the Breitling calibre 01) is a lovely piece of mechanical watchmaking, with COSC chronometer certification, and the chronograph mechanism controlled by a column wheel. It has a vertical clutch, the most prestigious form of clutch ensuring maximum precision, smooth chronograph starting, and low wear. 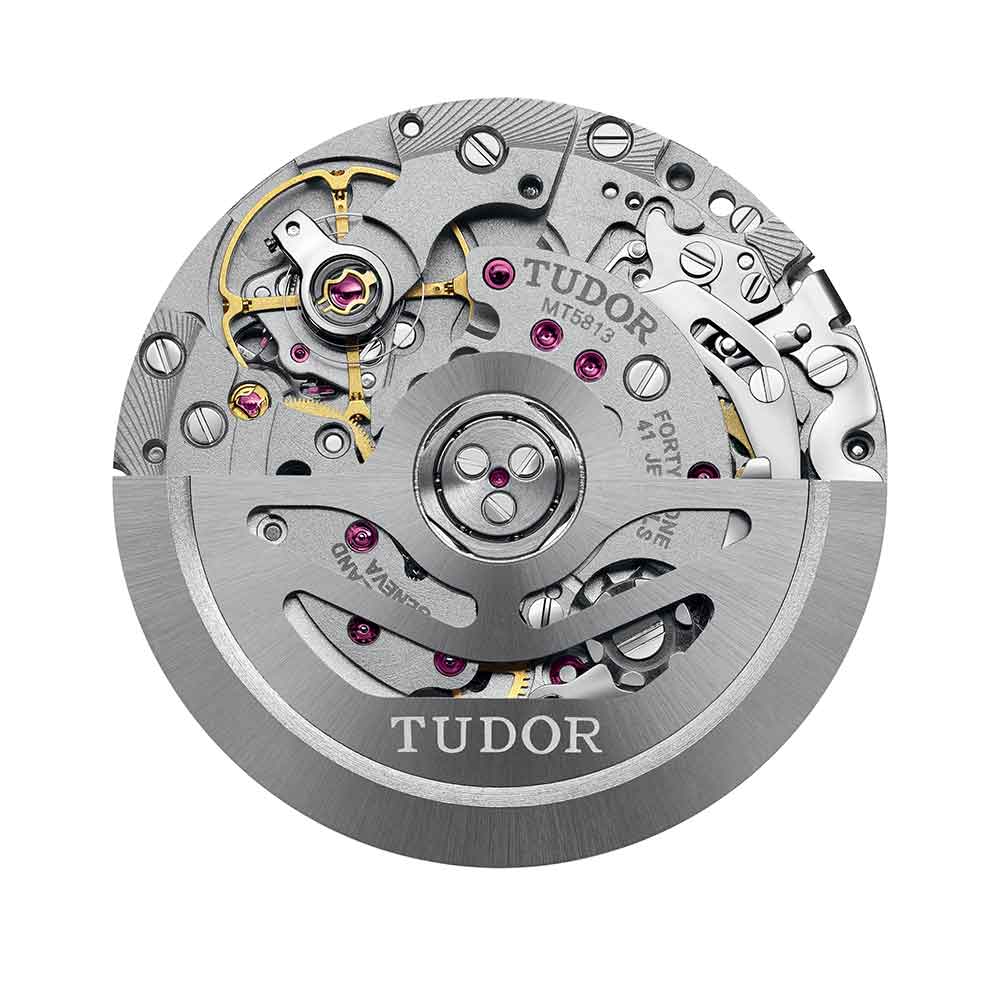 The movement has a non-magnetic silicon balance spring, and a rapid-adjustment date setting mechanism which can be adjusted at any time of day (in most watches, it’s advisable not to change the date between say 10 pm and 2 am). The balance is characteristically Tudor, with four screw weights that are used to regulate the watch. It runs at 28,800 vibrations per hour (4 Hertz, reflected in the quarter-second divisions on the seconds scale), and it offers a power resistance of about 70 hours, higher than average particularly considering that this self-winding movement has a single mainspring barrel. All these technical aspects are invisible to the user: the watch has a stainless steel caseback. 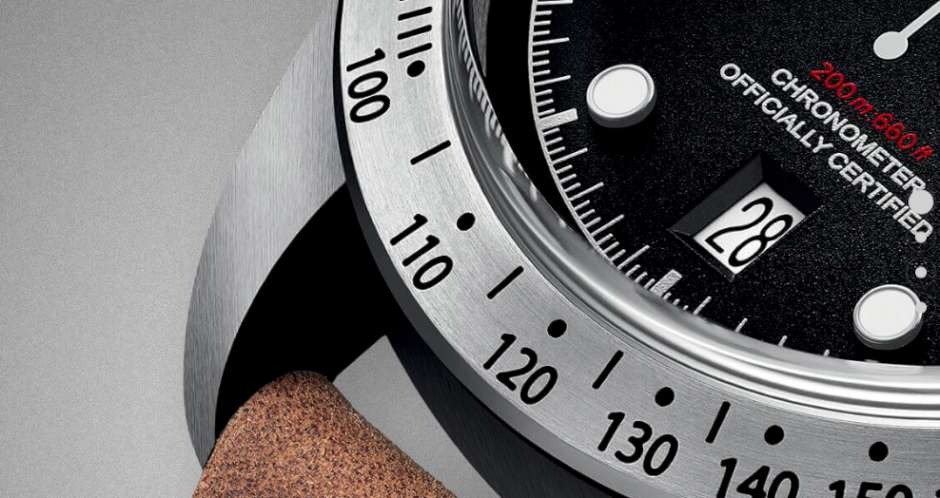