The Defy El Primero 21 by Zenith was undoubtedly one of the highlights of Baselworld 2017. With its chronograph seconds hand flashing around the dial once a second, and its movement that ensures timekeeping precision by means of two gear chains and two regulators, one for time and one for the chronograph, it is a truly exciting piece.

Zenith currently deserves attention for two reasons. First, its new products, which with pieces such as Defy and the Pilot Type 20 Extra Special 40mm which puts the brand’s classic pilot’s watch onto women’s wrists. Second, they have shown that they listen to bloggers. The new Zenith El Primero chronographs have been redesigned so that the subdials, though still overlapping slightly, no longer obscure their respective scales, something that was previously something of a contradiction, with the super-accurate 36,000 vph movement driving hands on a dial whose design made it virtually impossible to take accurate readings (I included an El Primero watch in a post on the five most illegible chronographs of 2016). 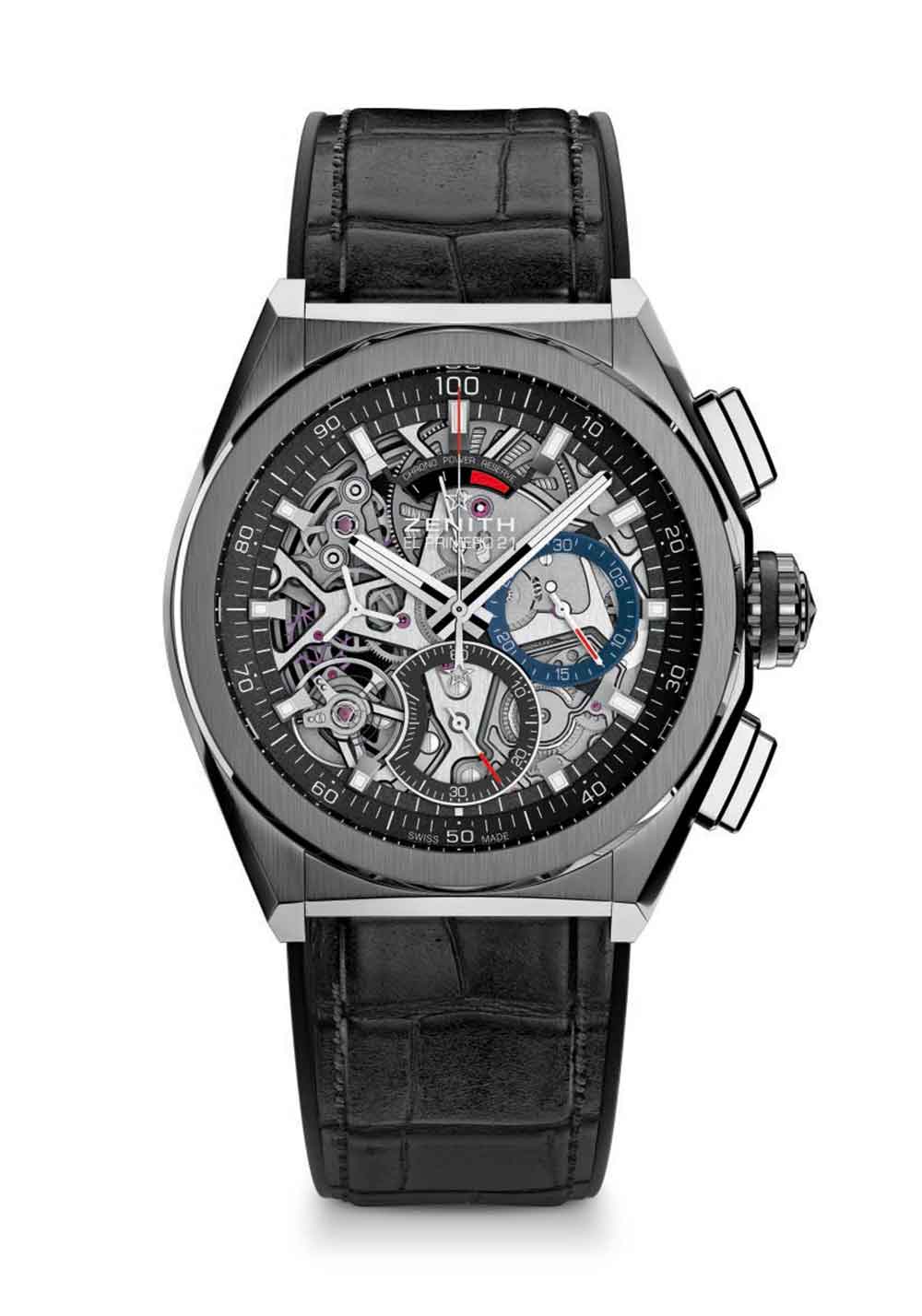 Since 1969, the El Primero movement, with its frequency of 36,000 vibrations per hour, 5 Hertz, has been one of the most accurate chronograph movements on the market. With the Defy El Primero 21, it is given ten times higher precision, from tenths to hundredths of a second, and it does it in the most intuitive and spectacular way possible, with a chronograph hand making a complete revolution once a second. It achieves this by means of a totally redesigned movement, which has 203 components, less than the 278 parts of the 1969 El Primero. With prices starting at just under €10,000, it’s not a cheap watch, but, considering the in-house movement, the 100th-second timing feature and the state-of-the-art new materials used to make it, it’s still exceptional value for money. Zenith’s task is now ensuring that the market of potential customers understands the significance of an in-house movement of this type. A comparison with other 100th-second chronographs puts the value of the Defy into perspective. 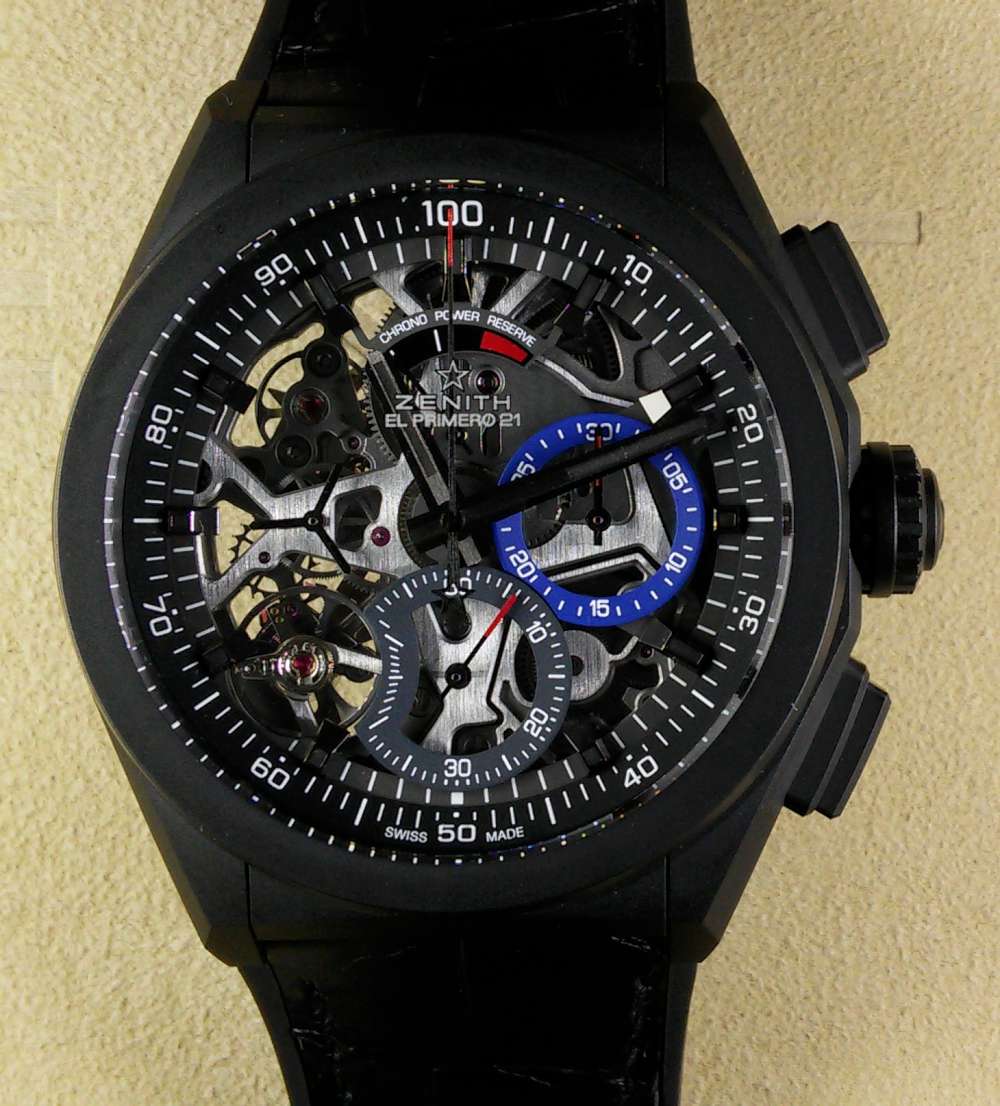 The watch is simple to read and use, even though the skeletonized versions have a deliberately complex aesthetic. There are two centre-pivoted hands for hours and minutes, small seconds at 9 o’clock, the 100th second central chronograph hand, a 30-minute counter at 3 o’clock, chronograph seconds at 6 o’clock, and a power reserve indicator for the chronograph movement at 12 o’clock. There are two barrels, one for each part of the movement, and the crown can be used to wind both, turning it clockwise for the chronograph, counterclockwise for the watch. The chronograph movement is manually-wound (25 turns to wind it completely); the star-shaped oscillating weight visible through the caseback winds the timekeeping barrel automatically. 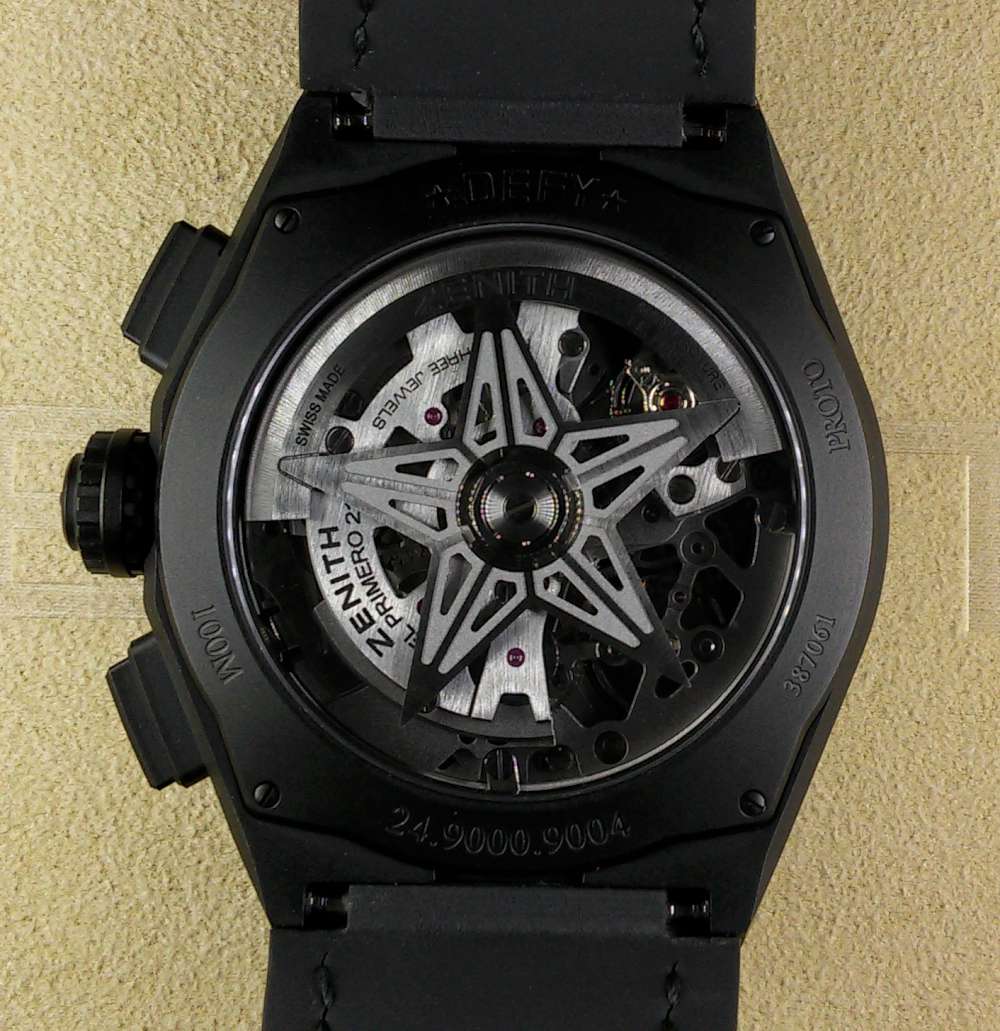 The El Primero 9004 movement is COSC-certified, so that the watch keeps time to a precision of within −4/+6 seconds deviation per day. When you start the chronograph running, it doesn’t alter this precision, because there are two independent gear trains, one for the time and one for the chronograph. Each has its own escapement system. The watch balance runs at 5 Hertz, 36,000 vibrations per hour, already a characteristic of the El Primero and faster than the usual 4 Hertz of most mechanical movements. The chronograph balance runs at the incredible speed of 50 Hertz, 360,000 vibrations per hour. The timekeeping part of the watch has a power reserve of 50 hours, while the chronograph can run continuously for up to 50 minutes. 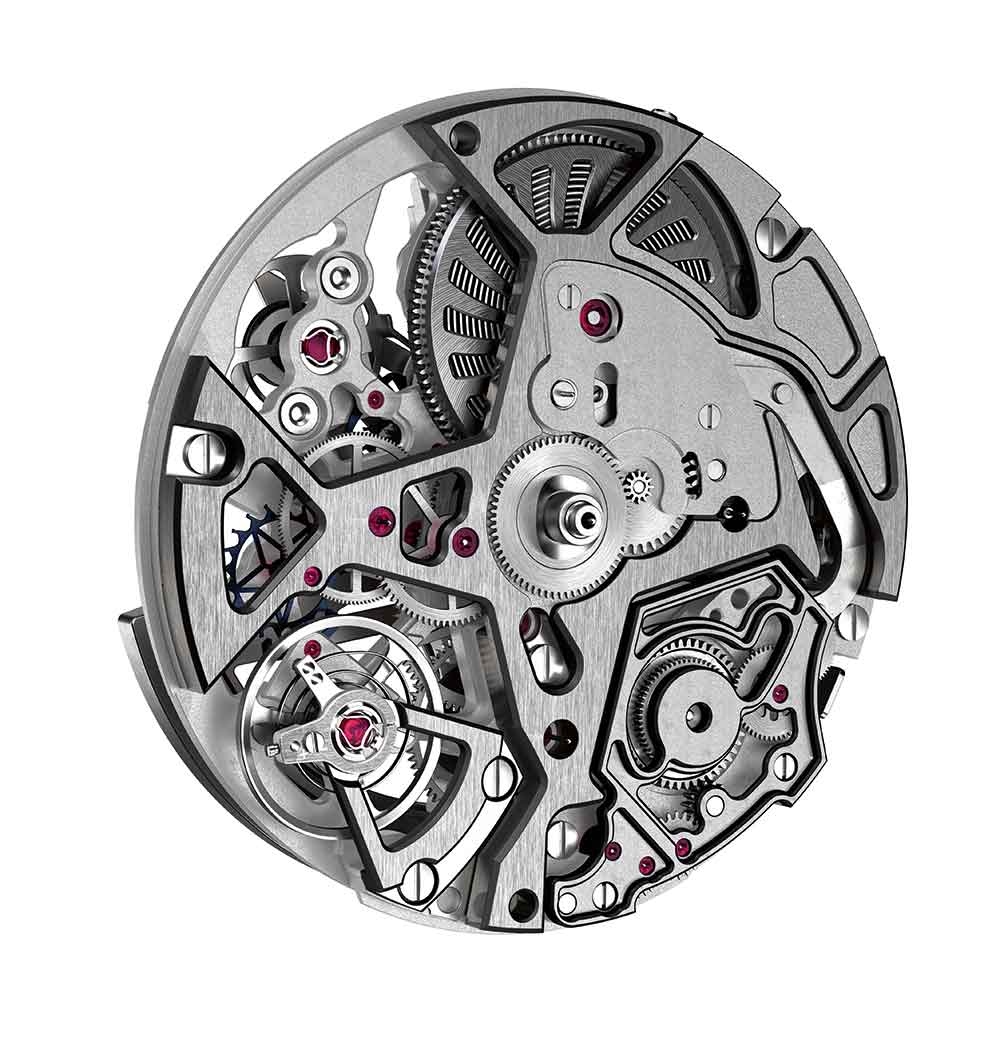 The balance springs are in Zenith’s own patented carbon-matrix carbon nanotube composite material, which exploits the remarkable strength and lightness of carbon nanotubes. They are also unaffected by magnetism (well beyond the 15,000 Gauss limit that Omega has established for its anti-magnetic movements), and very little by temperature. As the balance springs are also very light, their isochronism is also not disturbed by their position with respect to gravity.

The Zenith Defy El Primero 21 is made in three versions, all 44 mm in diameter, 14.5 mm in thickness, water resistance 10 atm (100 metres). They have a rubber strap with leather insert, secured by a titanium double-blade folding clasp. They will be available in boutiques from September 2017.

This version has a titanium case, and an openworked dial. Here the two chronograph subdials have two of the colours that hallmarked the original El Primero chronographs, blue and grey. It costs 10,900 Swiss francs, €10,600.

This version has a case in ceramicised aluminium and an openworked dial. It costs 11,900 Swiss francs, €11,500. 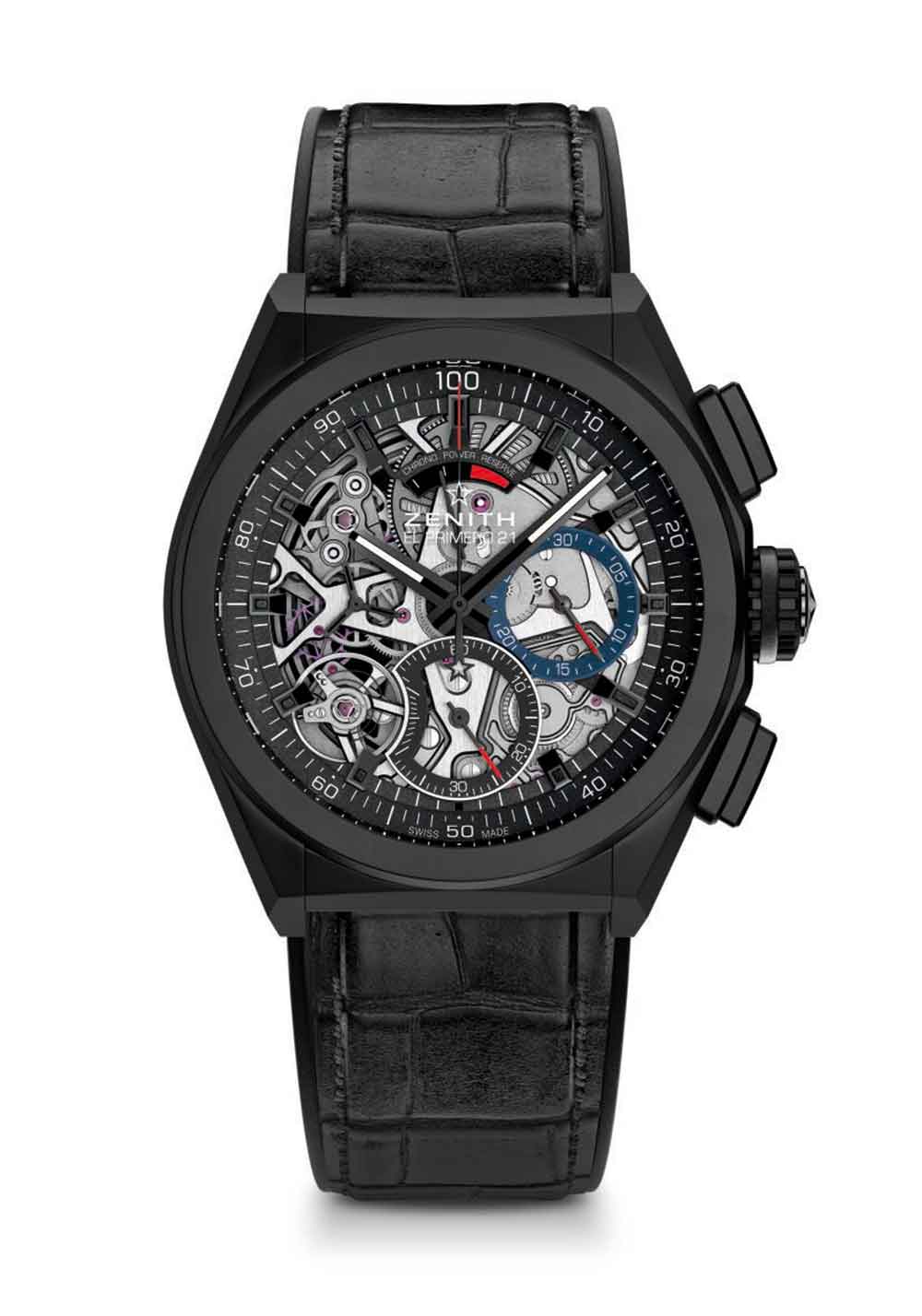 This version has a titanium case and a silver-toned solid dial, so with a completely different appearance with respect to the other two versions. As it was Jean-Claude Biver who particularly wanted to open up the movement in another new Zenith watch, the Chronomaster Full Open, perhaps this model is a marketing experiment: to see how many people prefer the skeletonized dial with respect to this more conventional arrangement. It costs 9.900 Swiss francs, €9,700. 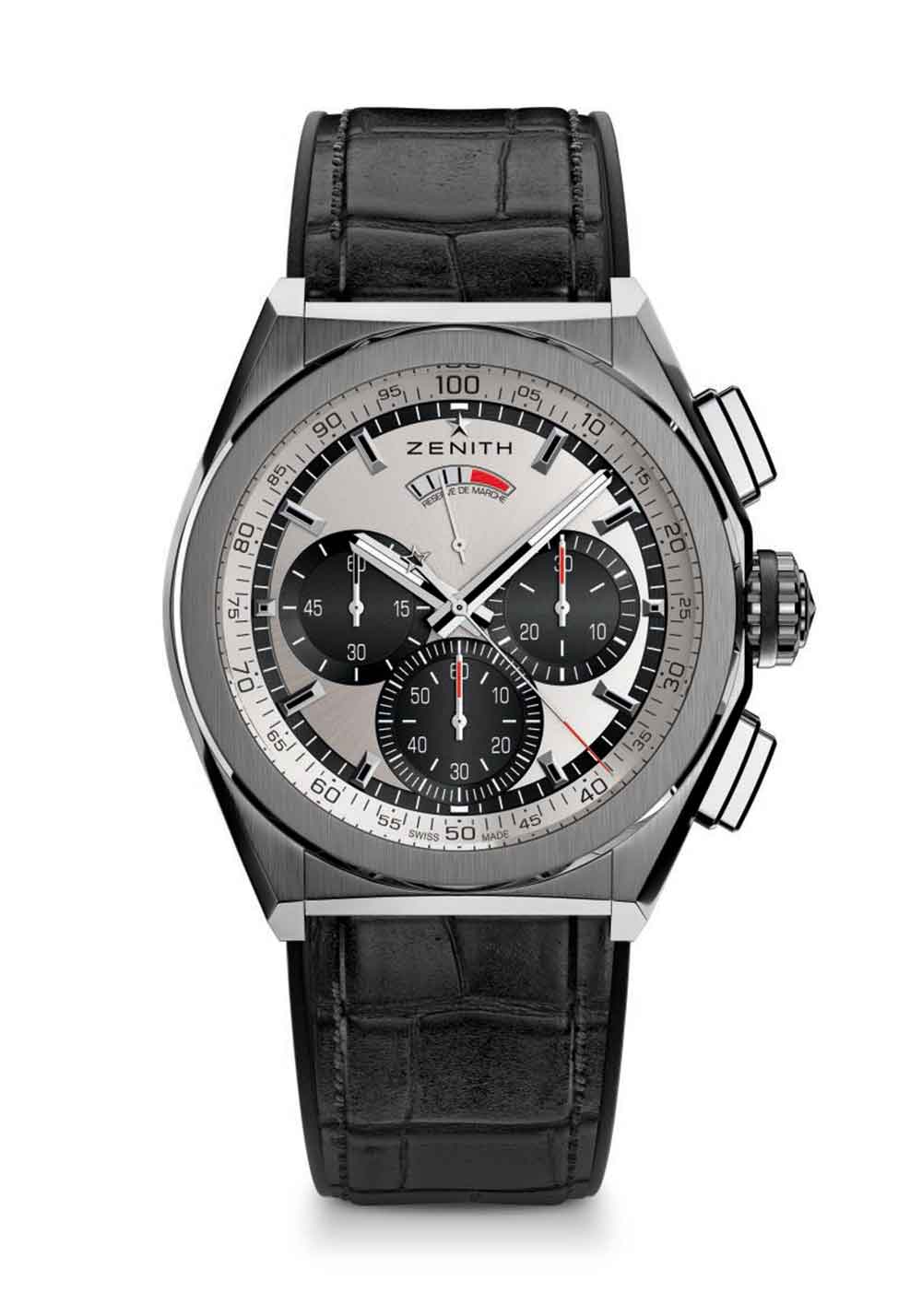