A lot is going on at Seiko. Even though the Grand Seiko brand was launched in 1960, for 50 years it remained something of a secret, with watches only available locally. It was launched internationally in 2010, and the first Seiko boutique outside Japan will open on 21 June 2017, on Brompton Road in London. This year, Grand Seiko will no longer be a secondary brand (up until now, Grand Seiko watches had both the Seiko and Grand Seiko logos) but will become entirely separate from Seiko’s other watch families. 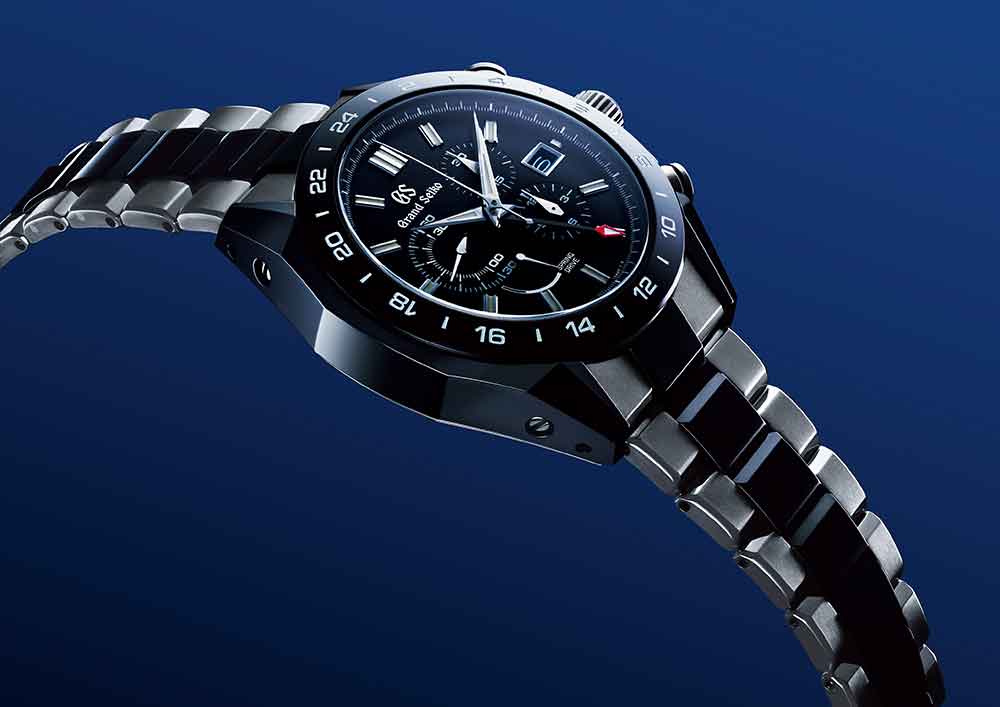 The Grand Seiko Black Ceramic Spring Drive Chronograph GMT will be available from June 2017 in three versions hallmarked by cases and bracelets in titanium and zirconia ceramic, one of the hardest and toughest ceramic materials in existence, seven times harder than stainless steel. The ceramic forms a sort of armour, screwed down over the titanium case. On the bracelet, the links in zirconia ceramic are raised slightly higher than the titanium, protecting it from scratching and ensuring a long life in its state of pristine beauty even when worn day to day. Case and bracelet have their own idionsyncratic form of beauty based on a typically Japanese approach to design, with mirror-finish polish of the ceramic parts, polyhedral facets, and sharpness of angles. The case is large at 46.4 mm diameter, 16.2 mm thickness, and it has a water resistance of 10 bar, 100 metres. It can be worn while swimming and for conventional diving. 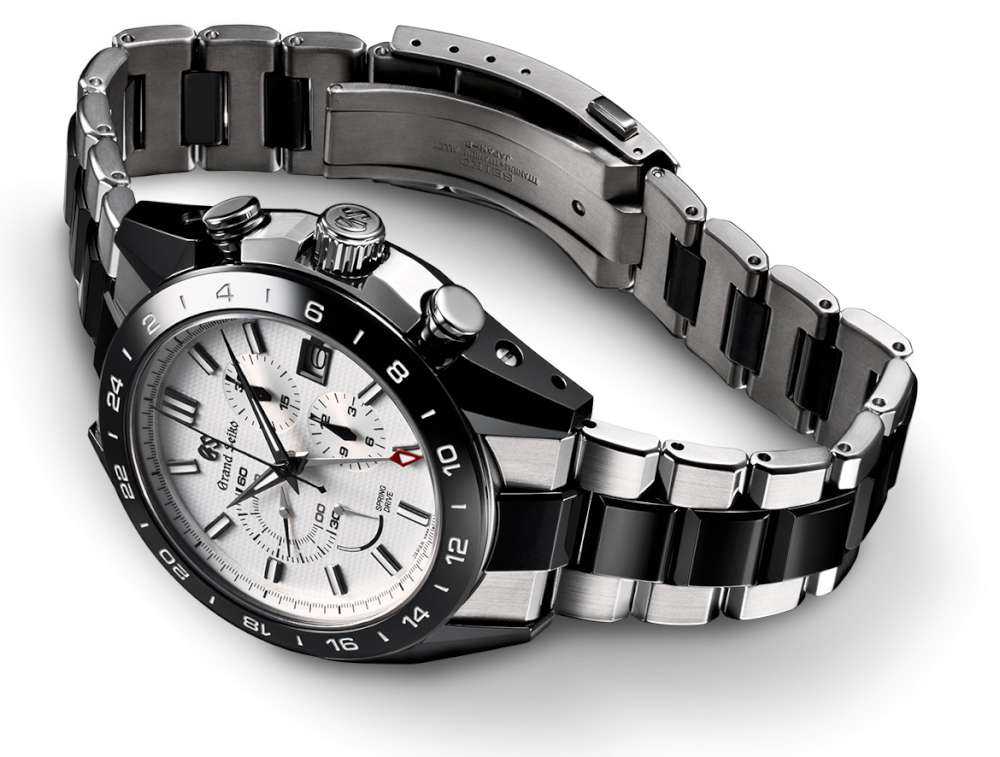 Seiko, and Grand Seiko in particular, strikes me as being in a situation analogous to the Galapagos Islands, where species were in isolation from the rest of the world and developed some totally unique characteristics. The Black Ceramic collection looks refreshingly different from other watches, and its dial is quirky and asymmetric. The continuous seconds hand on the left is double, so that each side of the hand corresponds to its respective scale. Below this, there is a power indicator for the spring drive movement. The Grand Seiko logo is shifted to the left, and the two chronograph subdials are vertically aligned and right of centre. The date window is large and horizontal. It all works to visual perfection. 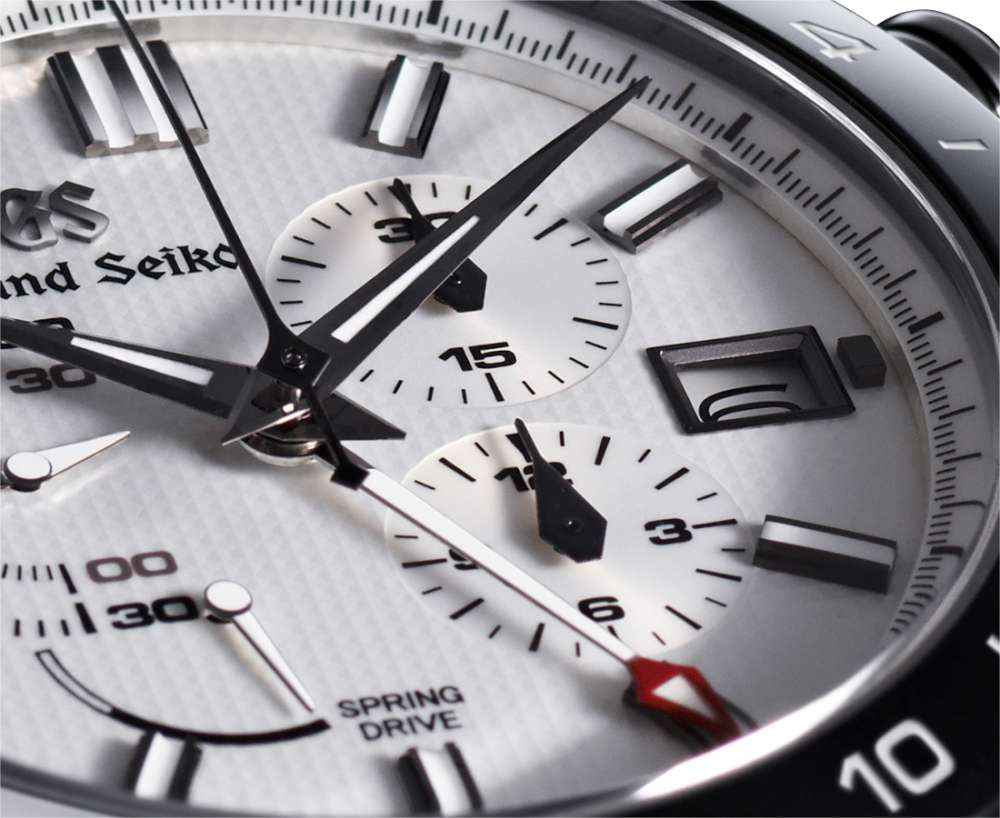 The three Spring Drive Chronograph GMT watches all have a GMT hand, which can be used in two ways: for a second time zone, read off the 24-hour scale on the bezel, or as a day/night indicator, setting it for the same time as shown by the hour and minute hands. The GMT hand can be adjusted from the crown, and the hour hand can be adjusted in one-hour increments for rapid setting when changing time zones. 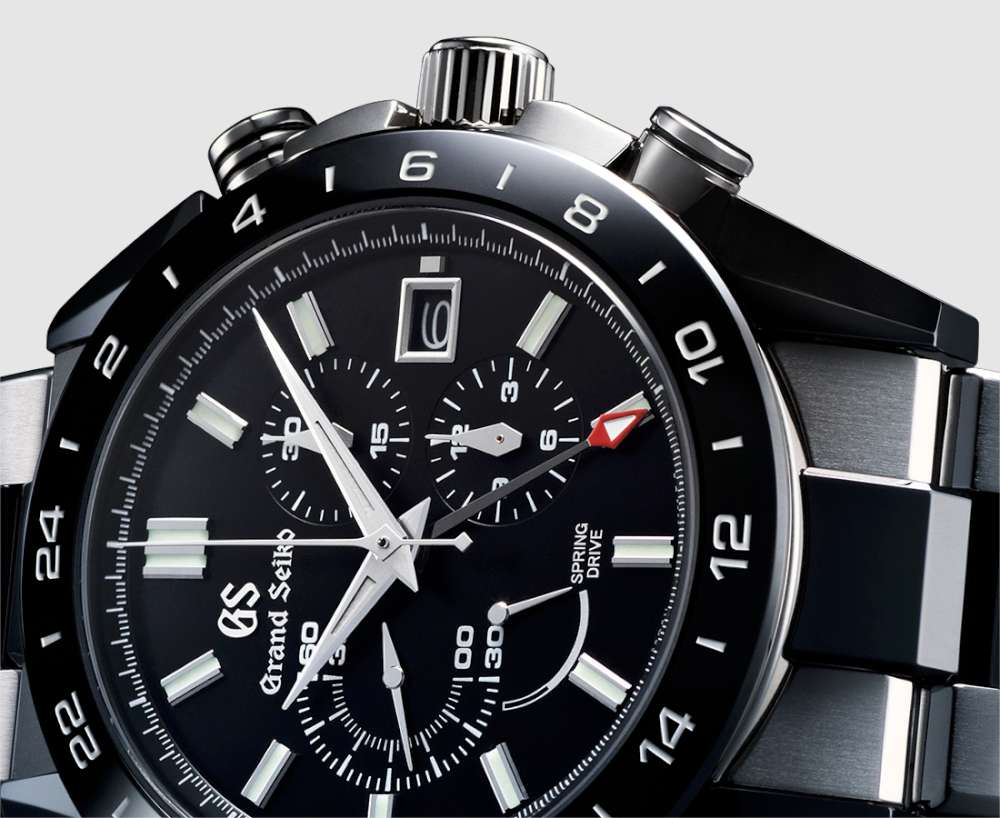 The watch is a hybrid, with a mainspring wound by the oscillating weight as in a normal automatic watch, or by turning the crown, and a gear train that transmits the mainspring’s power to the hands. The difference between a normal mechanical watch and this Spring Drive watch lies in the regulator. Instead of having a balance swinging back and forth, winding and unwinding the balance spring, the Spring Drive watch has a glide wheel, also powered by the mainspring. The glide wheel spins, and acts as a generator, producing electricity that is used to drive an integrated circuit and a quartz crystal oscillator. The integrated circuit measures the speed of the glide wheel, compares it with the timing signal produced by the quartz oscillator, and adjusts the speed of the glide wheel by regulating the power of an electromagnetic brake. So, no battery. The Spring Drive system is largely unaffected by temperature, by the watch’s position with respect to gravity, and by shock. It achieves an accuracy of +1/-1 second deviation per day, much better than any conventional mechanical watch. The small second and chronograph seconds hands move with a characteristic continuous glide, without the fractional-second jumps of a normal mechanical watch. Power reserve is 72 hours. 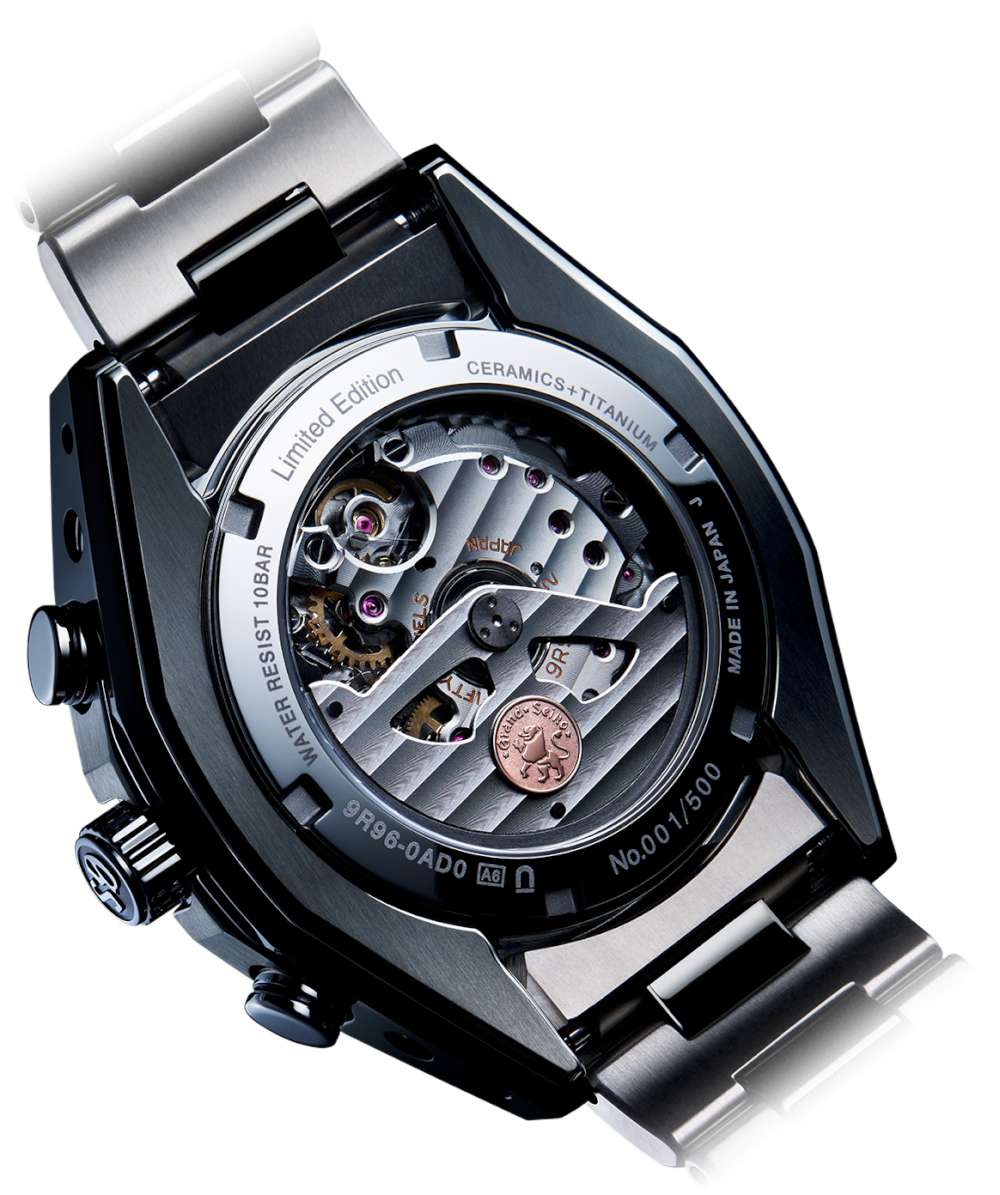 A version with blue dial and rose-gold-colour hands and hour markers has been made to celebrate the 10th anniversary of the Spring Drive Chronograph GMT calibre. The bezel has a tachymeter, and the position of the 24-hour GMT scale has been moved to the dial, just inside the inner bezel flange. The oscillating weight bears a Grand Seiko lion medallion in rose gold, denoting the extra-precise movement, which attains an accuracy of max +0.5/-0.5 seconds per day. 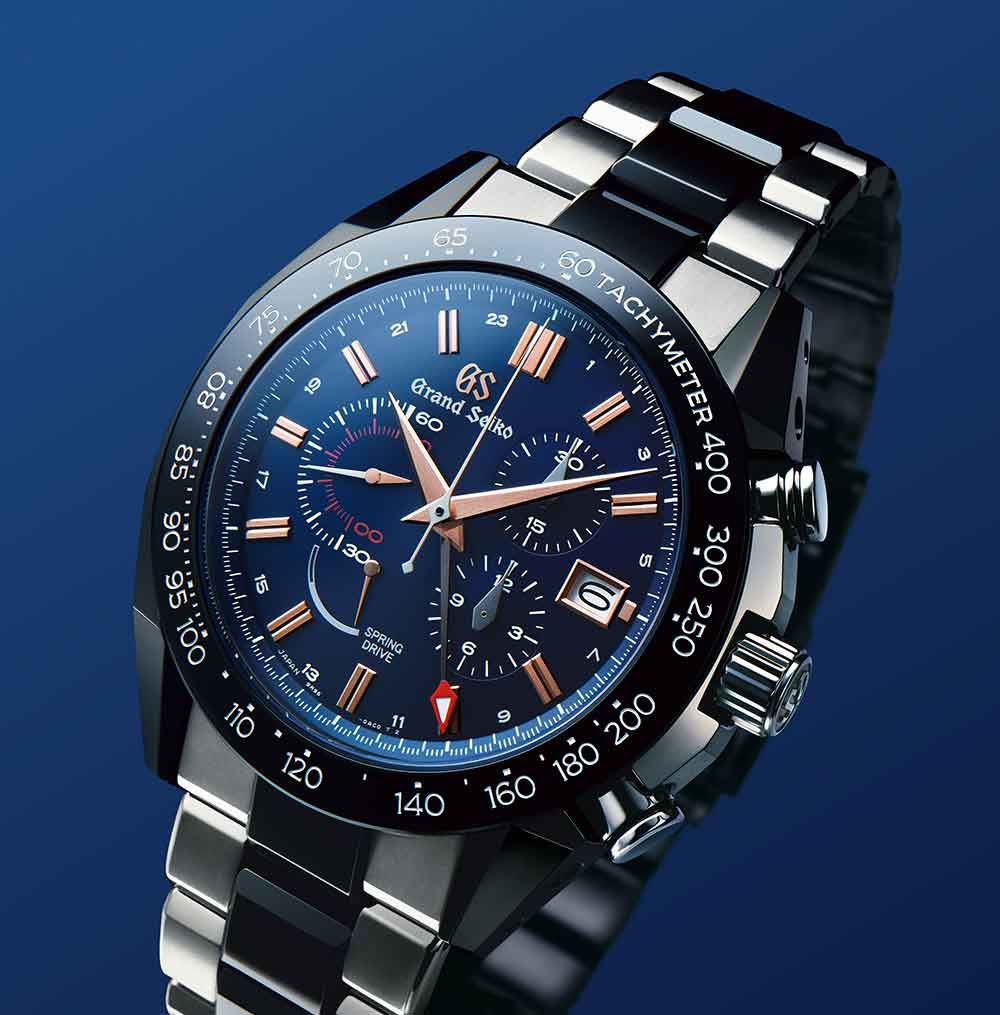 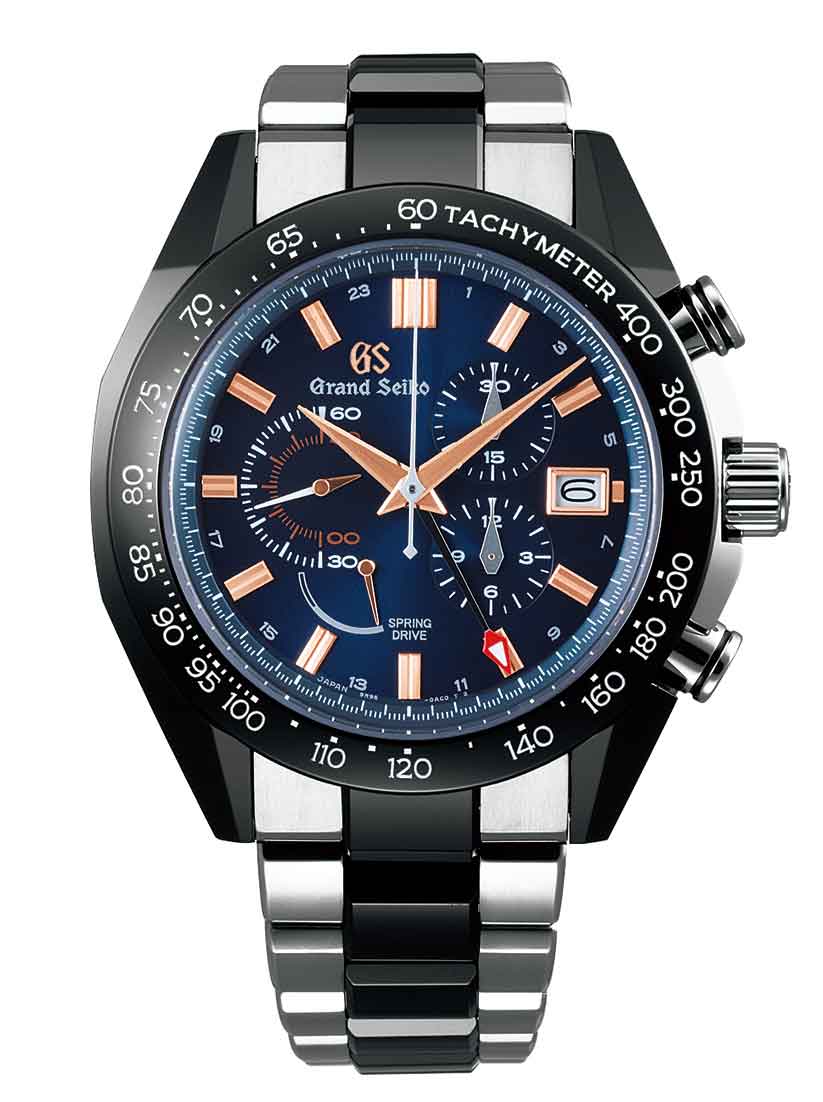 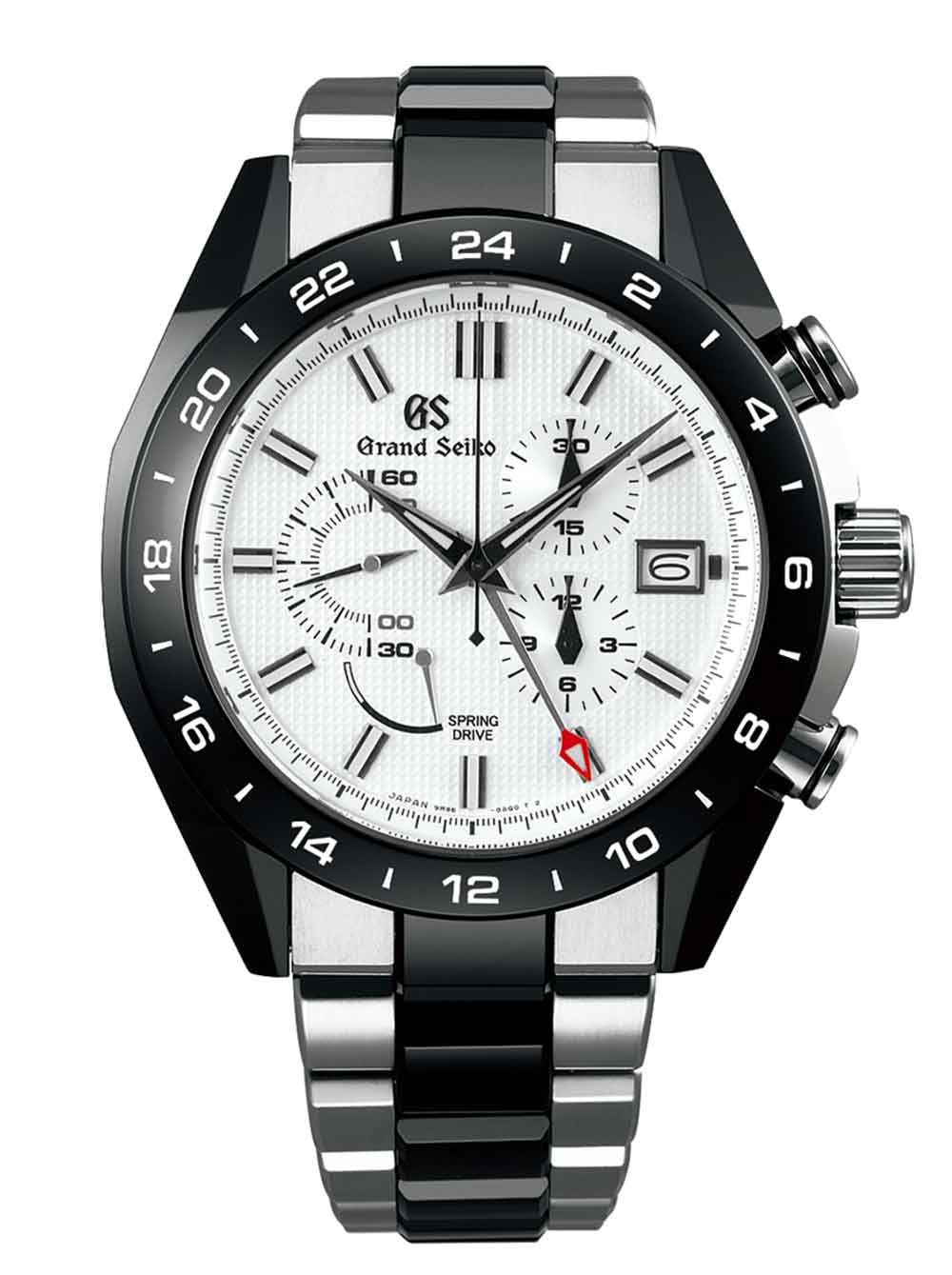 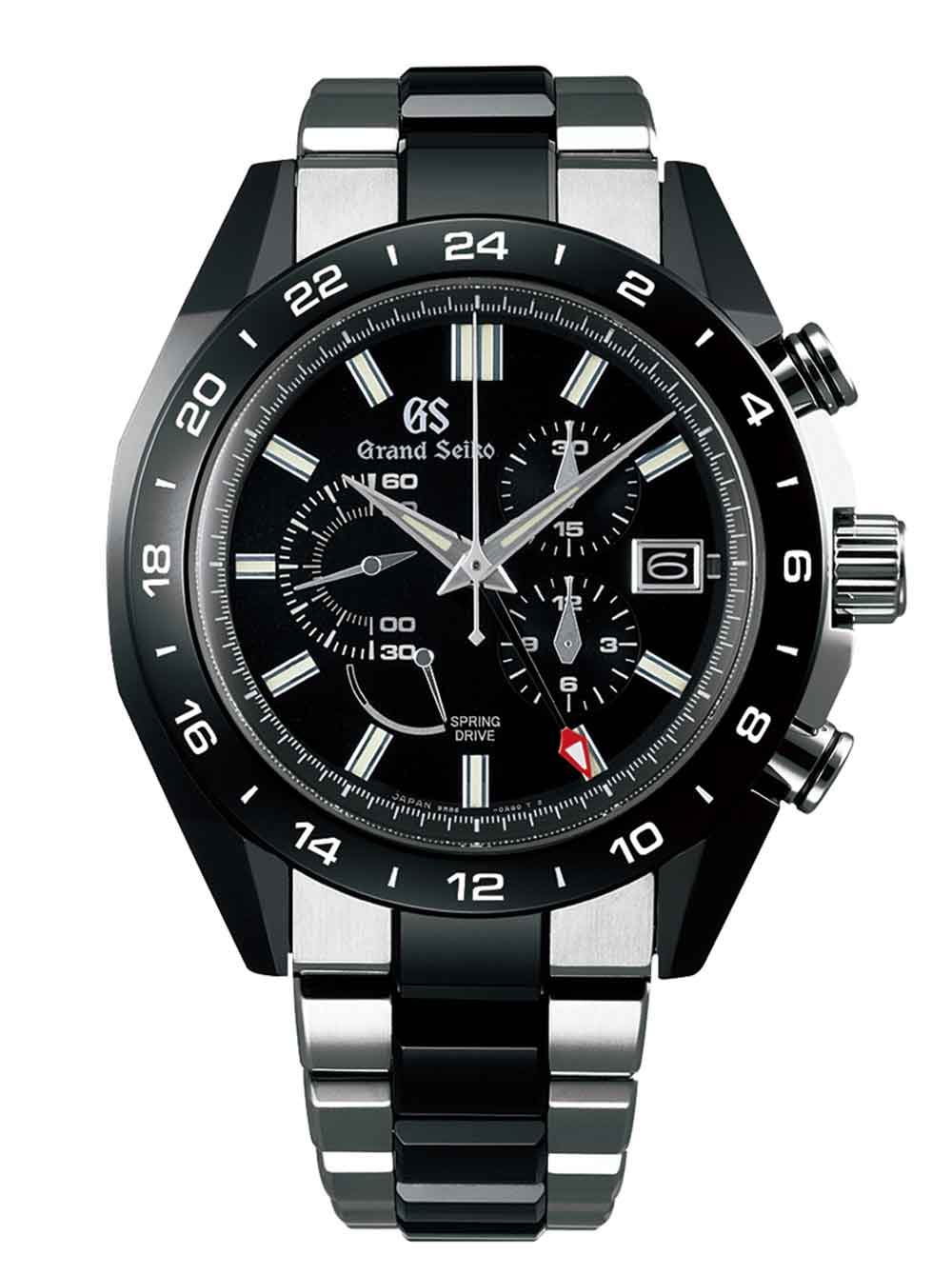