This watch by Montblanc is interesting for many reasons. There are a few other watches that measure time to a precision of 1000th of a second, but the Montblanc TimeWalker Chronograph 1000 Limited Edition 18 is probably the watch with the clearest display. Its movement reveals the heritage of Minerva and its traditional manufacturing unit at Villeret, part of Montblanc since 2007, but the case design is wholly TimeWalker, showing that Montblanc are concentrating on their watch families and giving them a powerful identity regardless of their simplicity or complexity. The TimeWalker Chronograph 1000 builds on the 2014 TimeWalker Chronograph 100, adding an extra decimal place to measurements of elapsed time. 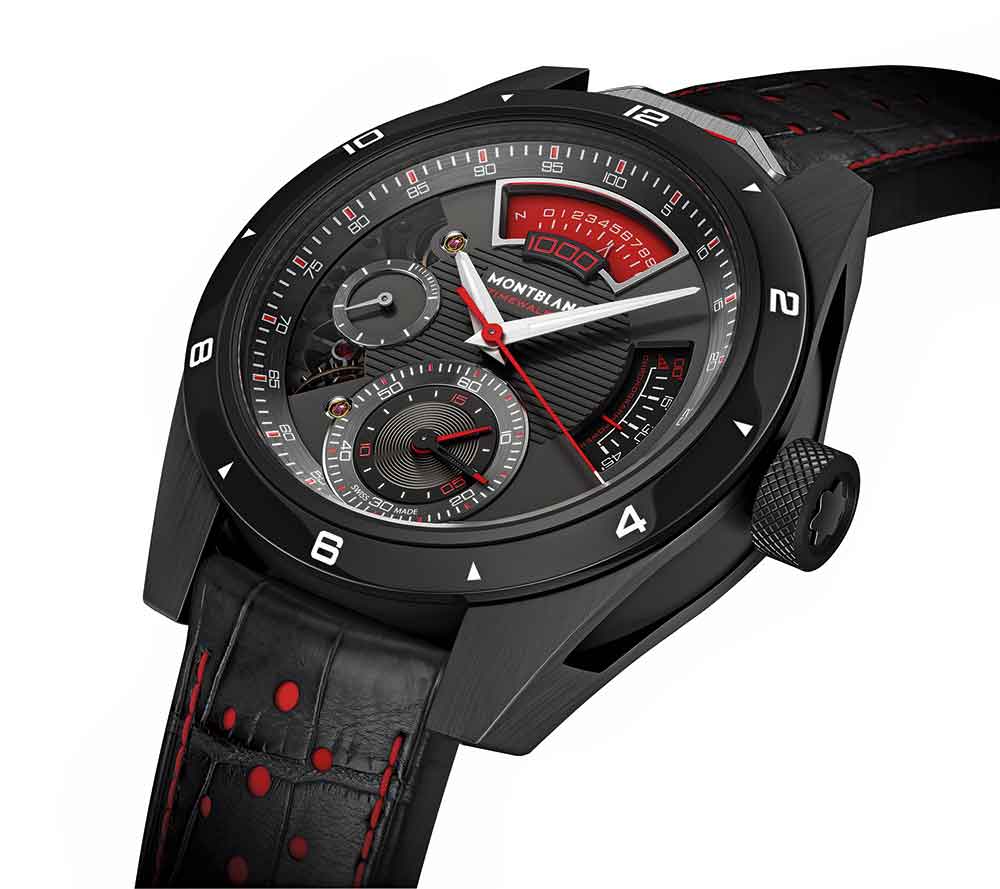 The case is large at 46.4 mm diameter and 17.34 mm thickness. It is in black DLC-coated titanum, with a black ceramic bezel that does not rotate, and serves purely to read the time using the hour and minute hands. There is a single pusher at the top of the watch. The red trim on case and dial reinforce the automotive feel, with other features shared by the 2017 TimeWalker collection such as the knurled crown, the recesses in the lugs, designed to resemble car air intakes, and the perforated leather strap with red stitching and lining. The watch has the standard 3-bar (30 metres) water resistance. 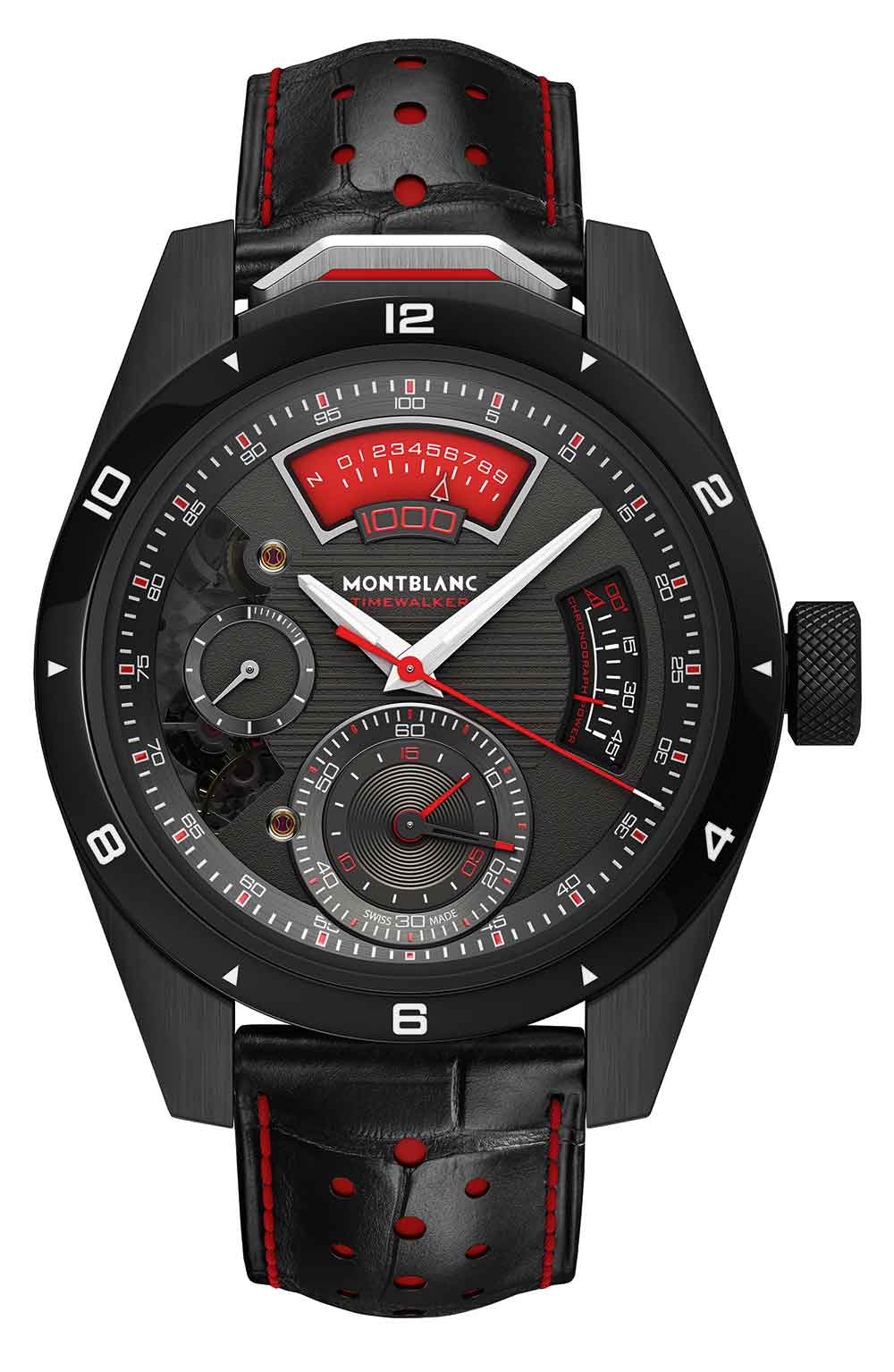 Automotive inspiration on the dial

The dial’s automotive appearance can be seen above all in the chronograph power reserve indicator at 3 o’clock, inspired by dashboard fuel gauges. Chronograph minutes (15 minutes) and chronograph seconds (60) are shown on the large subdial at 6 o’clock, thousandths of seconds are shown on the red scale at 12 o’clock, and continuous seconds are shown on the small subdial at 9 o’clock, which for some reason has the first ten seconds marked individually, then just markers every 5 seconds. The bearings for the two balance wheels can be seen, with their gold chatons, and a cut-out window reveals part of the two balances, the large 2.5-Hertz balance at 8 o’clock for the time function, and the small 50-Hertz balance at 10 o’clock for the chronograph function.

When you start the chronograph, the central red chronograph hand starts rotating around the dial, performing one rotatioin every second. It is regulated by the 50-Hertz balance wheel, therefore 100 half-cycles per second, 360,000 vibrations per hour, and so progresses with a jump every 100th of a second. After you have stopped the chronograph, you can read elapsed time in minutes and seconds (shown on the subdial at 6 o’clock), and hundredths of seconds directly from the red central hand. On stopping the chronograph, the indicator on the red scale at the top of the dial moves from the N (neutral) position to the numeral corresponding to the thousandths, so instead of (for example) 5.76 seconds, you can immediately see that it’s 5.762. This extra precision was added to the movement of the 2014 TimeWalker Chronograph 100, and it consists of a wheel powered by the chronograph gear train. It rotates at ten revolutions per second, so ten times faster than the central hundredths-second hand, providing the resolution necessary to display thousandths. 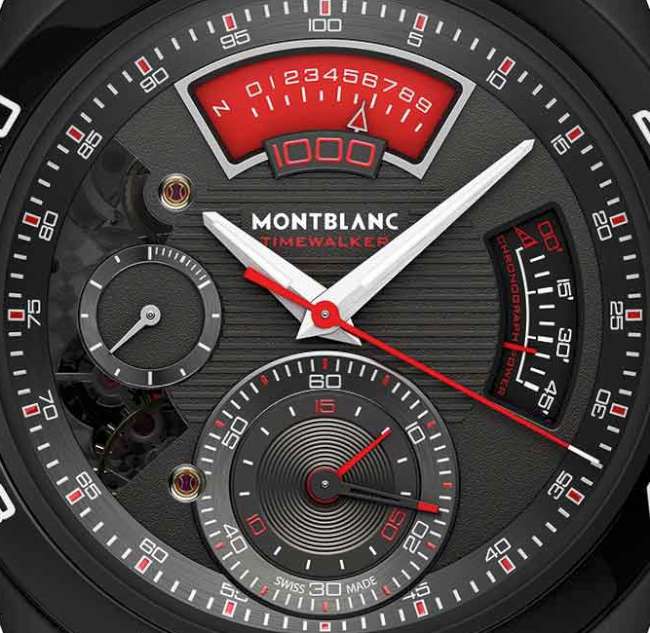 The MB M66.26 movement has the high level of finish that you would expect from of watch of this type, with the impeccable artisanal skill that is typical of the Villeret manufacturing unit. The view through the caseback reveals a Minerva hallmark, lever extremities that end in an arrow. 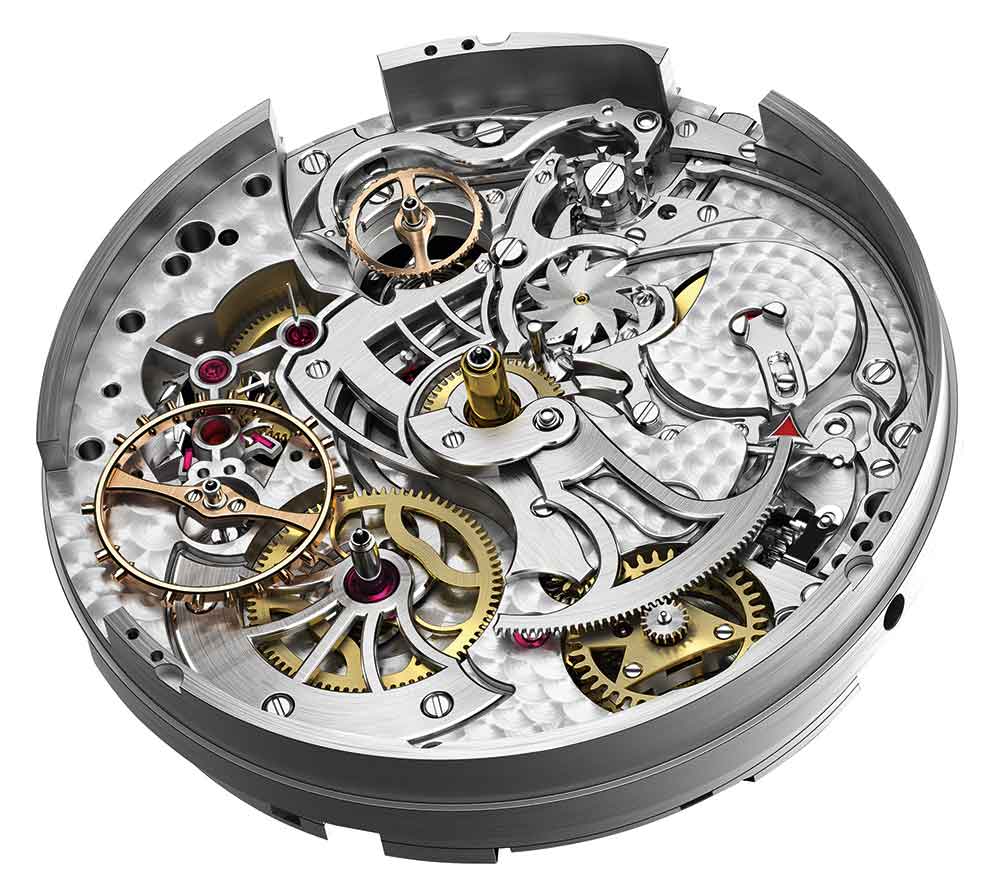 There are a couple of things that I don’t find entirely logical. The chronograph mechanism has a power reserve of 45 minues, but only 15 minutes is displayed on the subdial. If the ceramic bezel rotated, you could start the chronograph and then use the bezel and minute hand to provide an approximate reading of the duration. It’s a pity that the thousandths-second scale doesn’t have the same curvature as the concentric elements, bezel, chapter ring and so forth. But more than anything, it’s a concept watch, so these observations on practical aspects are irrelevant. 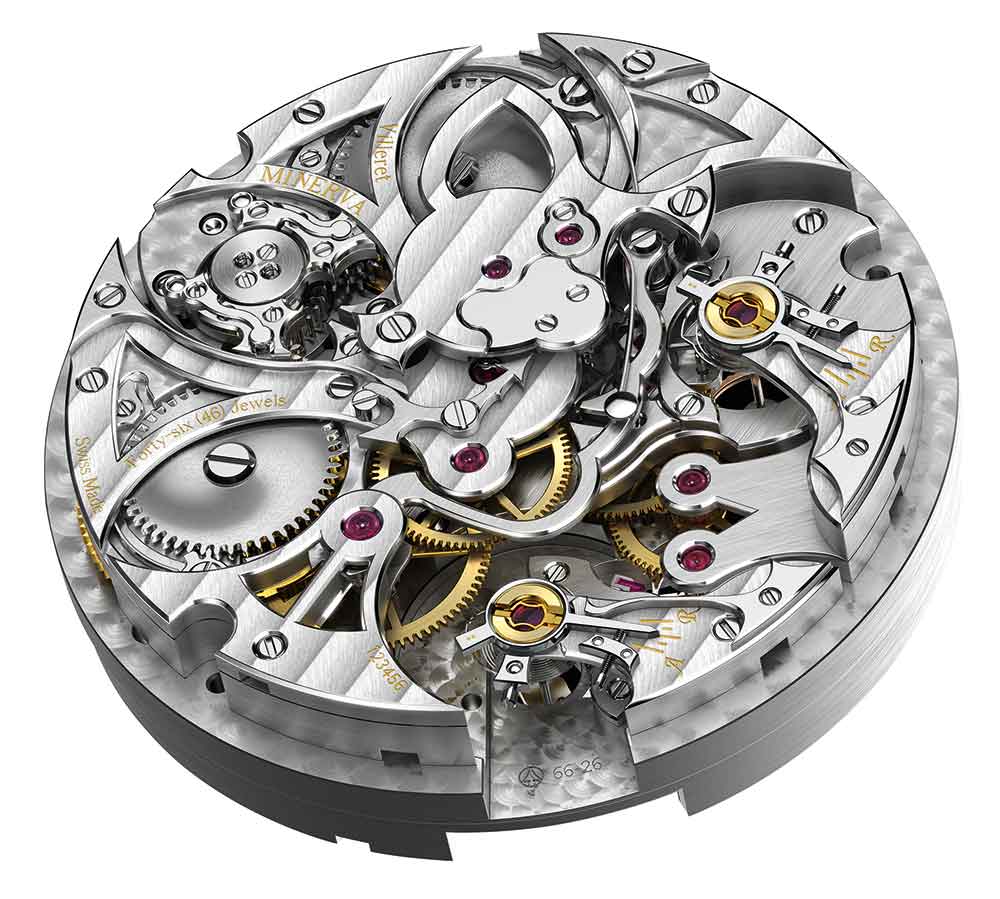 The Montblanc TimeWalker Chronograph 1000 Limited Edition 18 (18 pieces will be made) is reference 116828, and it will be on the market from June 2017. Each piece is tested and certified by Montblanc’s Laboratory Test 500, which simulates 500 hours of use. Its price is €175,000. In a way I find this surprising, because the 2014 TimeWalker Chronograph 100 cost €50,000, and this new piece shares a lot with that watch. Perhaps it was the 2014 Chronograph 100 that was exceptionally low-priced. The company spokespeople say that the €175,000 price tag demonstrates Montblanc’s quest to reduce the prices of its high-end watches as well as its entry-level watches, because timepieces of this complexity made in its Villeret manufacture used to cost €200.000-€275,000.