Omega haven’t exactly gone over the top with effort on this one. This is a watch celebrating their partnership with Emirates Team New Zealand in the 35th America’s Cup, one of the two watches it has presented for the occasion. While several other brands have designed watches capable of timing the countdown to the start of a regatta (there is a selection of regatta chronographs here), Omega have simply adapted their existing Seamaster Planet Ocean GMT by giving the rotating bezel two five-minute sectors that can be used for an empirical countdown against the minute hand. The degree of approximation is compounded by the distance between the minute hand and the scale on the rotating bezel. The rest of the scale on the bezel is designed in such a way as to make timings or countdowns beyond 10 minutes virtually impossible, with a scale formed of a circle of dashes. The extra blue hand is for the GMT function, with a 24-hour scale on the inner bezel flange. The other notable feature of the watch is a helium escape valve, on the caseband at 10 o’clock. In its original format the Seamaster Planet Ocean GMT is already a questionable combination of features. This ETNZ version is equally attractive on the wrist but, in terms of functions, a compromise timepiece to an even greater degree. 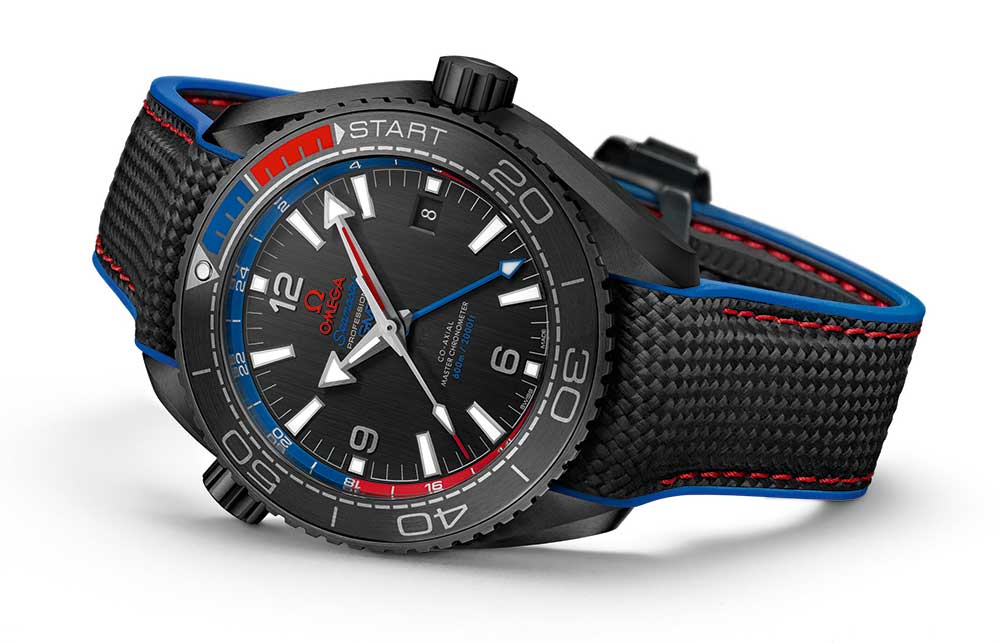 The case is in Zirconium Dioxide ceramic, 43.5 mm in diameter, with the chemical formula ZrO2 marked on the lugs and dial. The bezel is also in ceramic, with the first two five-minute sectors in blue and red rubber. The indicator at 12 o’clock on the bezel is filled with green-emitting SuperLumiinova. The hour indices on the dial are in white gold. The watch has a solid caseback with the logo of Team Emirates New Zealand. The strap is in black rubber with blue trim and red stitching. The water resistance rating is 600 metres. 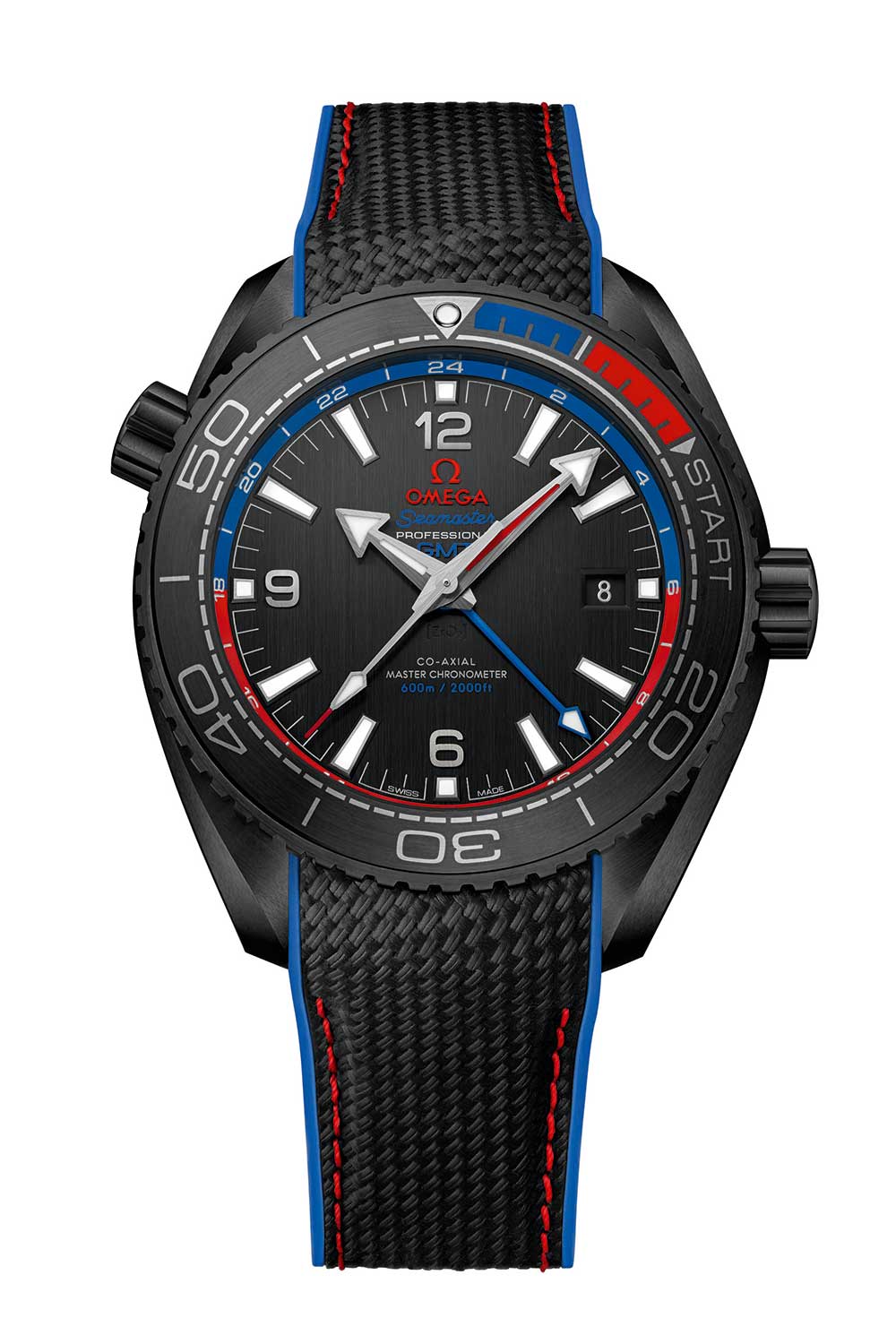 The watch is powered by the Omega co-axial Master Chronometer 8906 calibre, with two barrels providing 60 hours power reserve, and a silicon balance spring. It is anti-magnetic to 15,000 gauss, and has METAS certification (Master Chronometer) which comprises eight tests including chronometer precision.

The second watch released by Omega for the America’s Cup and the Emirates Team New Zealand is a more technical quartz watch which provides absolute precision for the regatta countdown on liquid crystal displays, and also has an audible alarm function. This watch is called the Speedmaster X-33 Regatta ETNZ Limited Edition, and it is a series of 2,017 pieces. It has a brushed titanium case with lots of pushers on the caseband, and it has a water-resistance rating of 3 bar/30 metres. So, when you’re on your boat wearing this watch, take care not to fall into the water! This timepiece is already available in boutiques at the price of €5,000, $5,900. Further information from the Omega website. 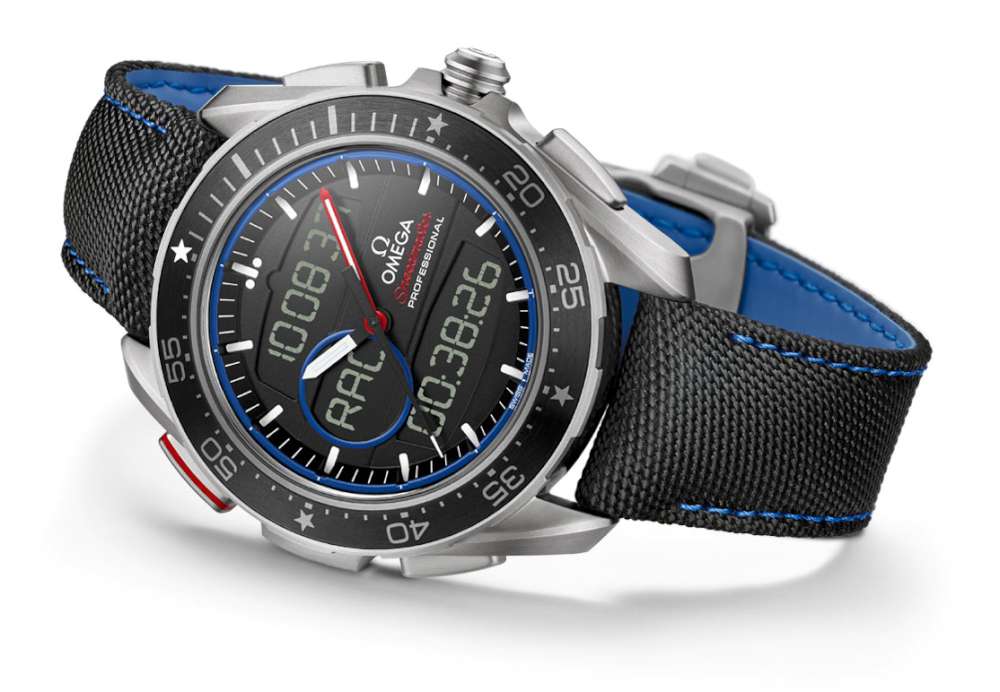