At first sight, it’s a tourbillon watch with a big date, but there is more to the Bovet 1822 Virtuoso VIII than meets the eye. One thing is difficult to see in the official photos: the case is slightly angled, wedge-form, only 4.5° but nonetheless it creates a sort of theatrical stage effect. In the presentation, Bovet owner and CEO Pascal Raffy said that the case design also improves ergonomics. This is the first timepiece in the Bovet Fleurier Grandes Complications collection that is non-convertible – others have the ingenious system whereby they can be transformed into a pocket watch or pendant. 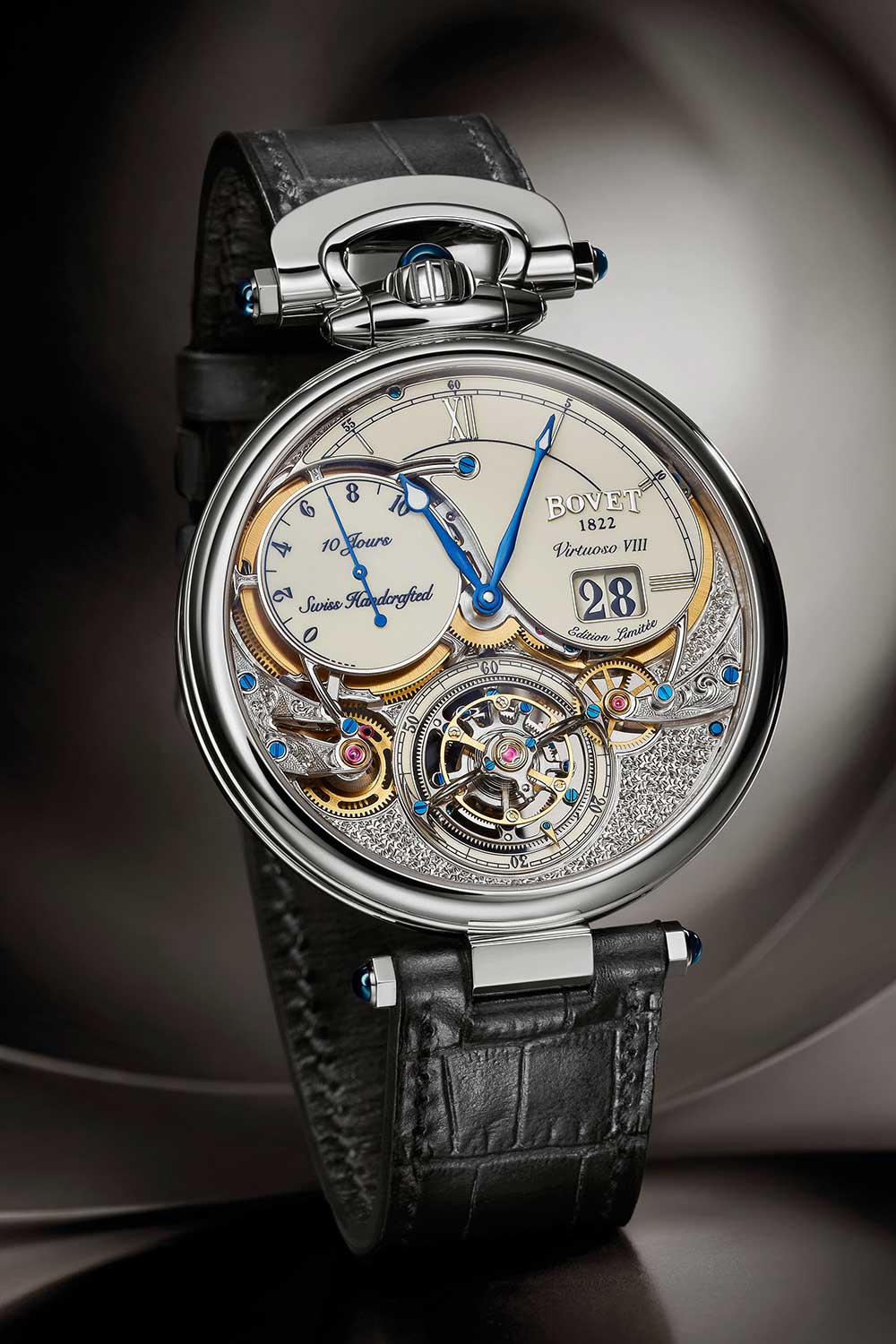 Tourbillon given pride of place

The dial is arranged to maximize the space for the tourbillon, which is patented for its two-sided effect, achieved by not having a visible pivot point for the carriage. The balance wheel is regulated by six variable-inertia weights. At the top of the face, there is an ingenious arrangement that looks like two symmetrical dials, but that in actual fact comprises just the left-hand dial for power reserve, and another larger portion above. The dial parts are held by beveled arms. A big date display is on the right, while hour and minutes hands are almost central. The design is highlighted by the parts of the movement visible below that create a sort of partial figure-of-eight, always a popular motif in watchmaking because beloved by Chinese customers. The pivot for the hour and minute hands is slightly eccentric, shifted upwards to enhance visibility of the tourbillon. 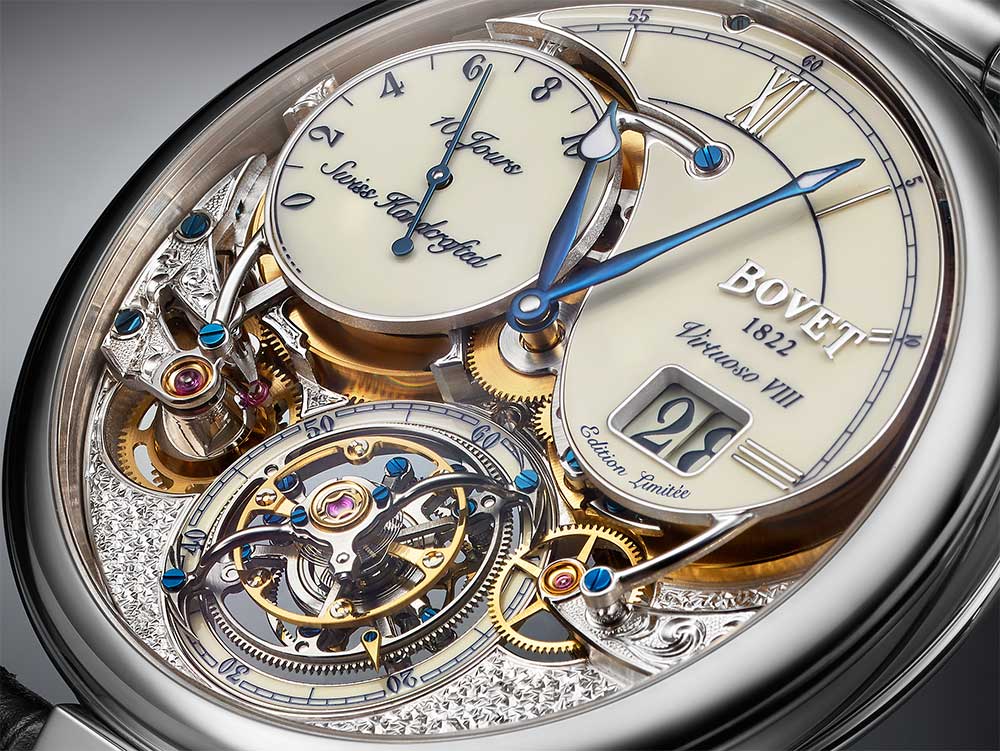 The size of the big date is exceptional and it’s difficult to see where the two discs for the numerals can be. The effect is of high legibility. The same sort of user-friendly design can be seen in date adjustment, achieved by pressing the crown. The bow on the strap attachment prevents accidental date-changing. 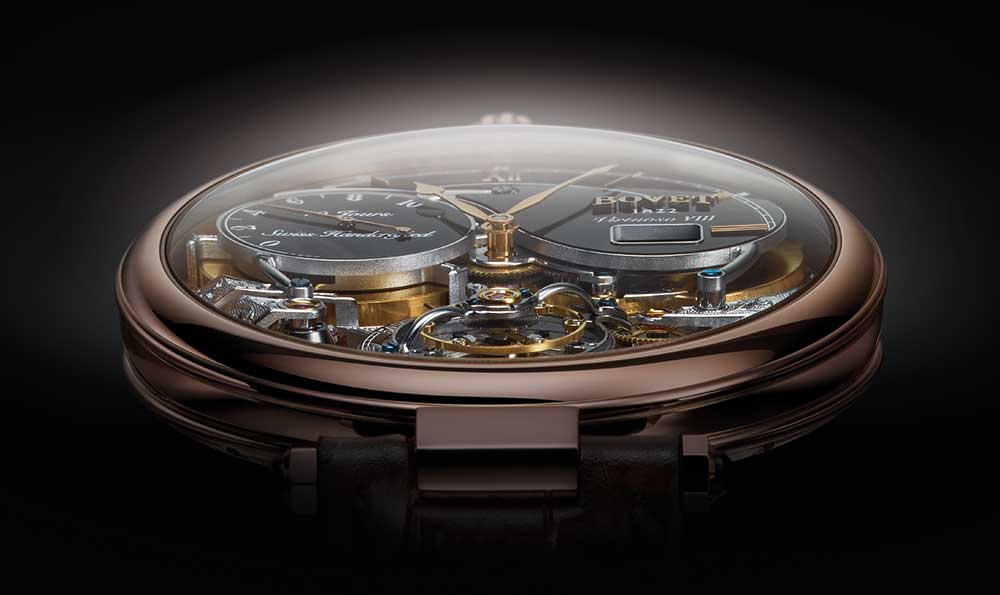 The tourbillon carriage and bridge is in titanium, and it bears a pointer indicating the seconds on a scale around the tourbillon well. The watch includes two other patented features: a winding system that reduces the number of turns of the crown necessary to wind the movement, and the three-dimensional teeth used in this spherical winding system. The appearance of the face is one of classical watchmaking, and this is even more true on the caseback, which reflects traditional 19th-century pocket watches. Pascal Raffy has no problems with this sort of celebration of antique watchmaking, because the Fleurier Grandes Complications collection is designed to showcase these time-honoured artisanal skills. In addition, 2017 is the 195th anniversary of the brand, which is why Raffy thought that a “big date” would be particularly appropriate. 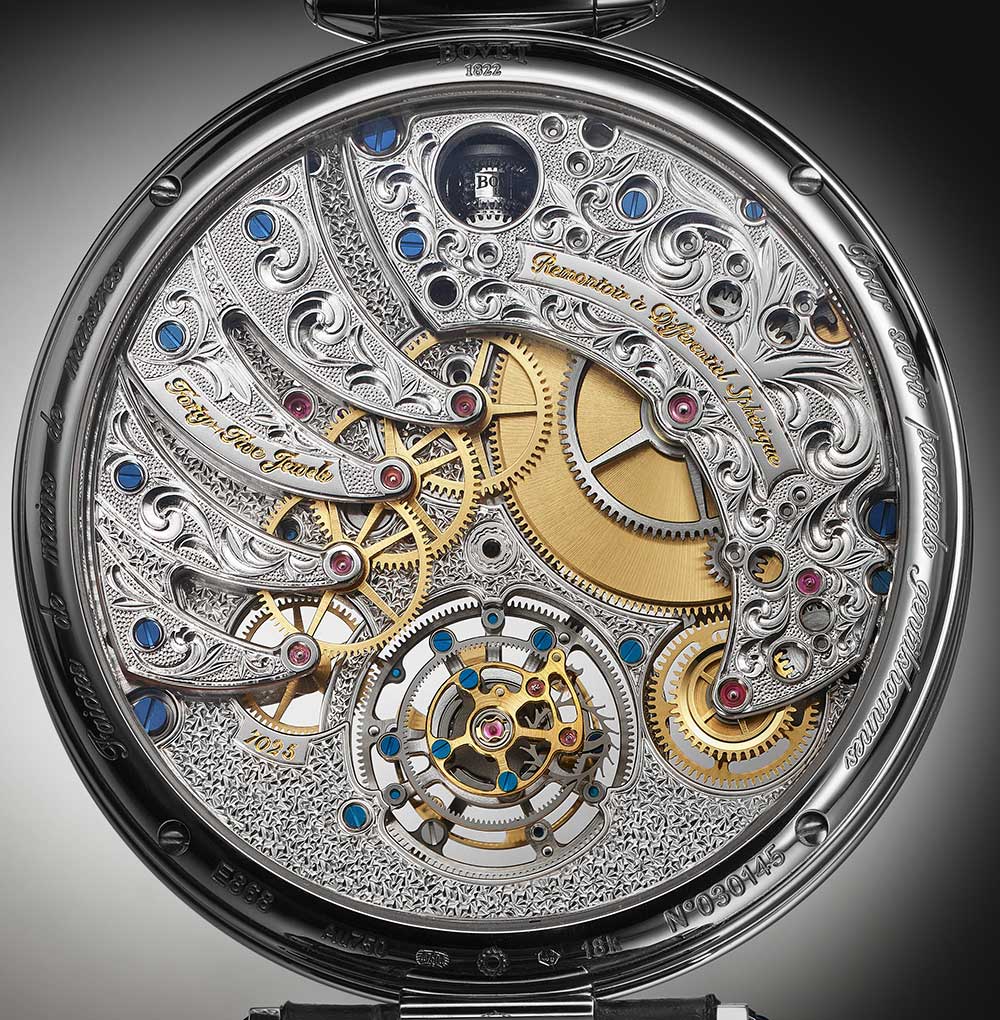 Ten day’s power reserve from a single barrel is good going, particularly for a tourbillon. It is achieved in part by the traditional balance rate of 18,000 vibrations per hour, 2.5 Hertz, but also by some other features connected to the mainspring (I imagine). 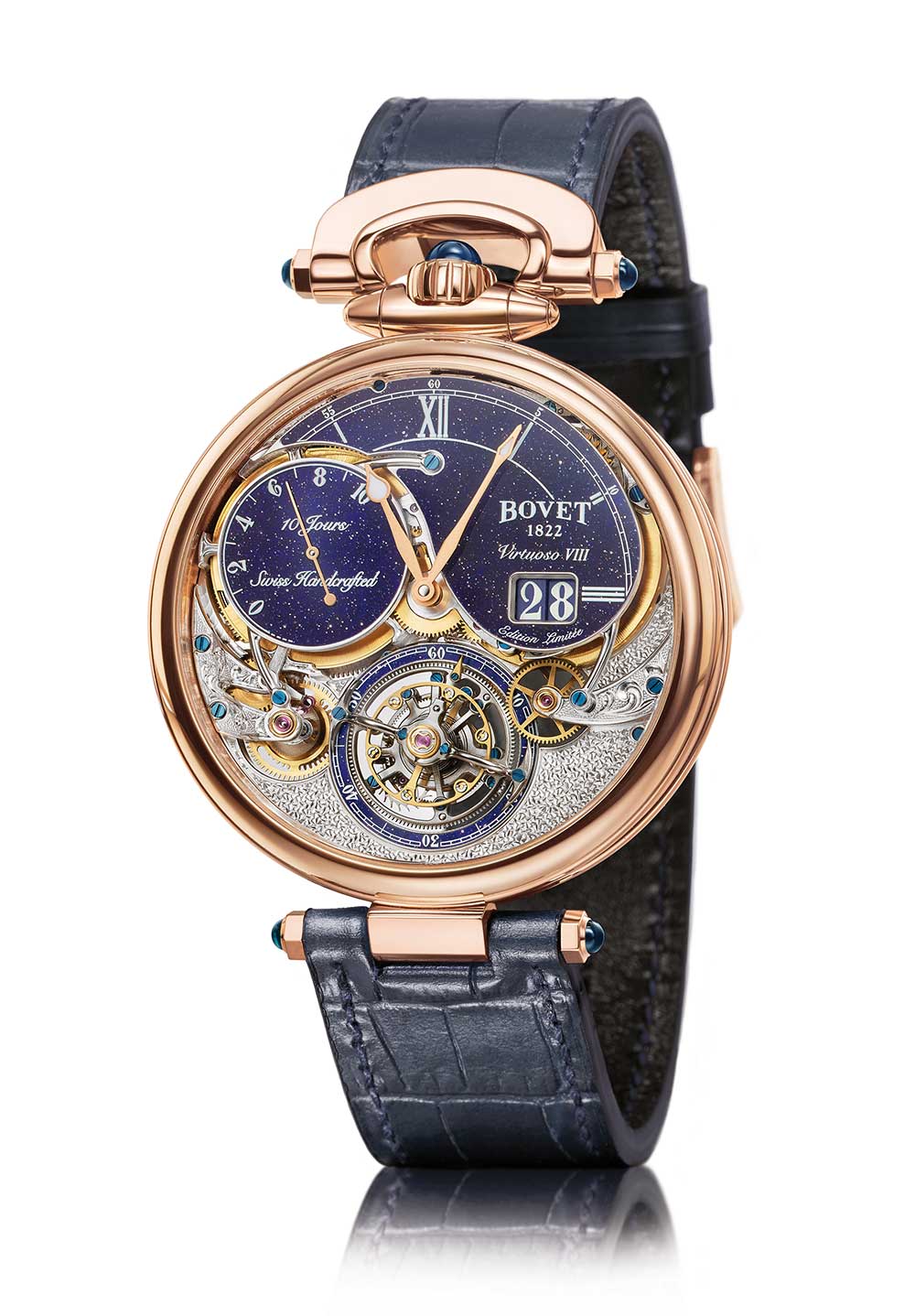 The Bovet 1822 Virtuoso VIII is a limited edition. 80 movements (calibre 17BM03-GD) will be made. Customers can choose between red gold, white gold or platinum cases, with or without diamonds, and with white, black or aventurine dial. The watch is 44 mm in diameter, 13.45 mm thick, with a 30 metre water resistance and an alligator strap. 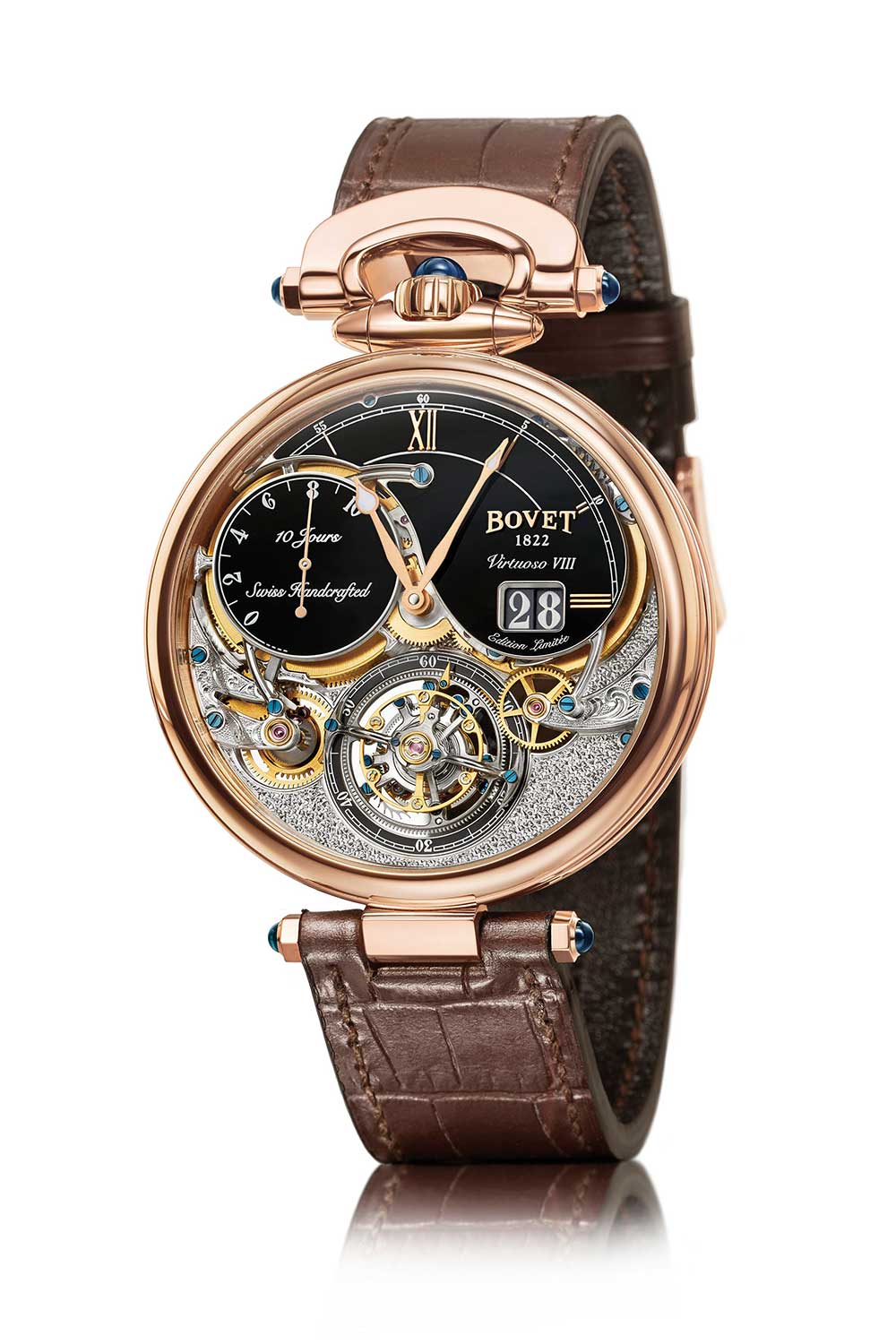 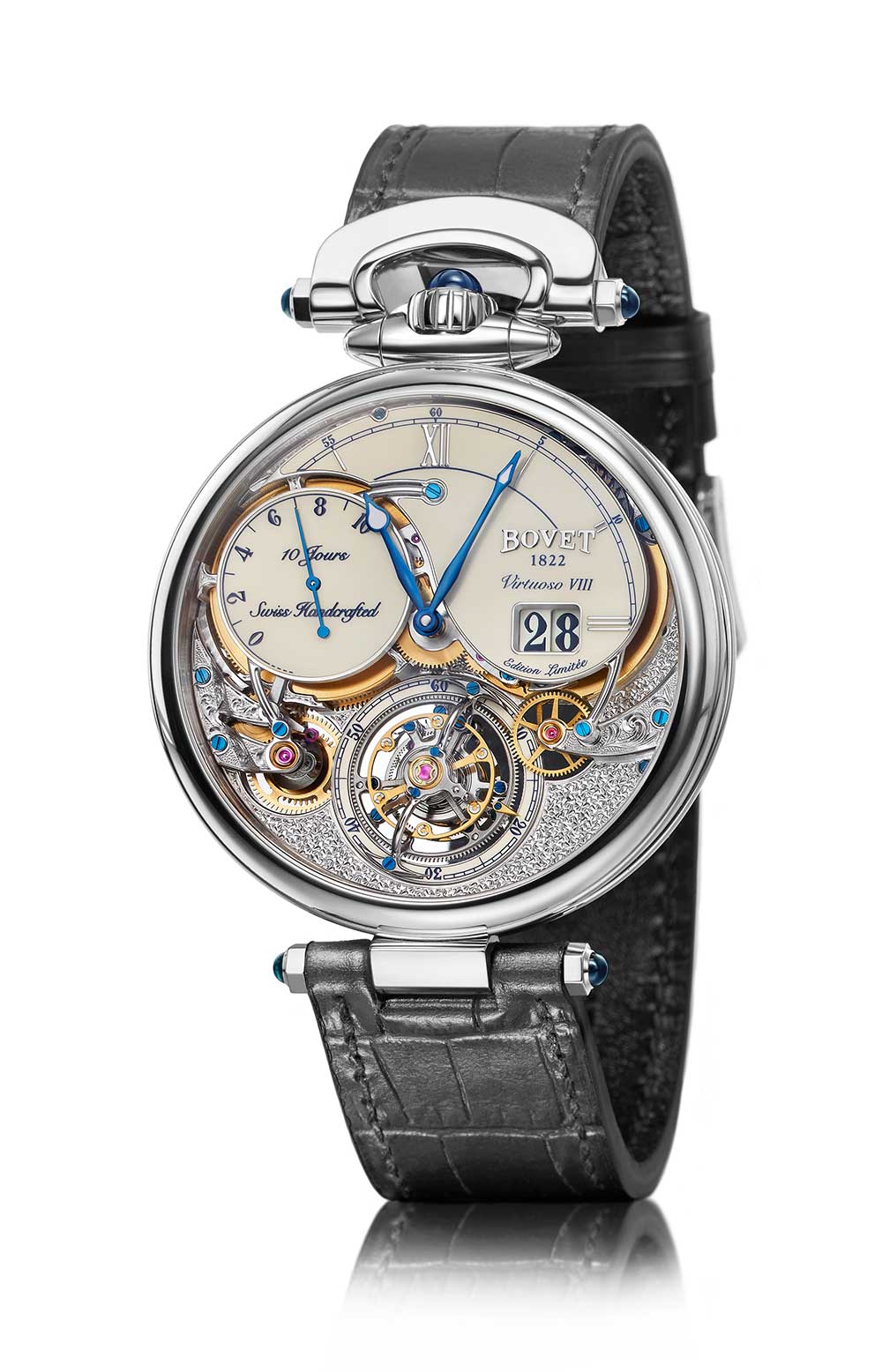