The RJ X Donkey Kong is a tribute to the like-named arcade game, and it is a limited edition of 81 watches in reference to the year in which the game was first released, 1981. Gaming arcades weren’t my scene and so I have to rely on what Romain Jerome tells us: before starring in his own game, Super Mario (celebrated in another Romain Jerome watch) appeared first as the jumping handyman in Donkey Kong, dodging obstacles in the effort to rescue his girlfriend. Donkey Kong was the first game in which players could jump over obstacles and across gaps, and here Super Mario is rushing to grab a hammer while he tries to avoid the barrels that Donkey Kong is throwing at him. 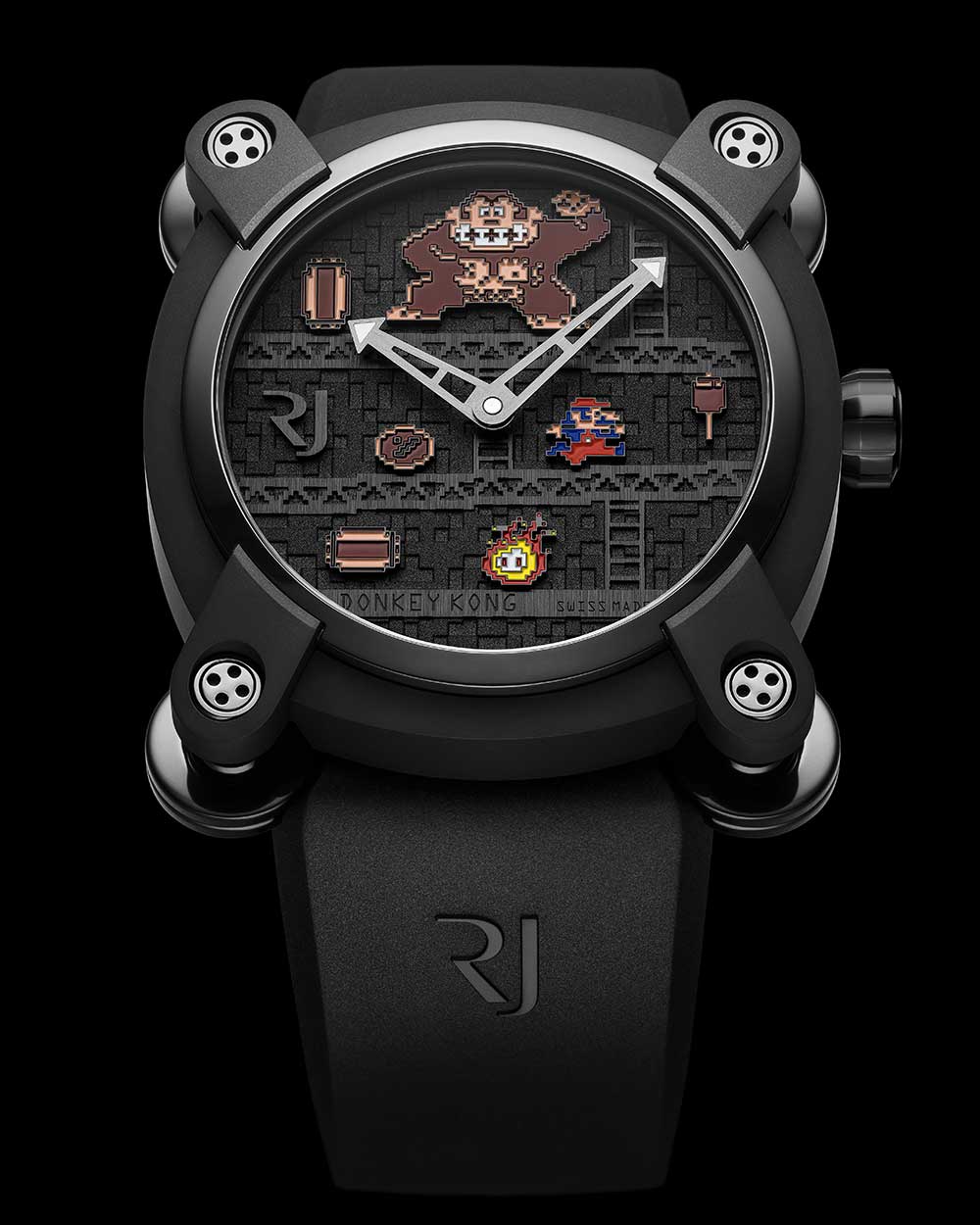 The highlight of this watch is the link to the Nintendo game, the limited numbers produced, and the manual techniques used on the dial. The principal features are hand-painted in enamel, in an artisanal fashion whose objective is to recreate the simple computer-generated images, with their flat colours and visible pixels. The dial is cast with a three-dimensional pixelated effect and different finishes, satin and DLC-coated. The hands match the building-site appearance, and have a SuperLuminova coating, blue emission. The watch has a strap in rubber with black PVD-coated steel folding clasp. 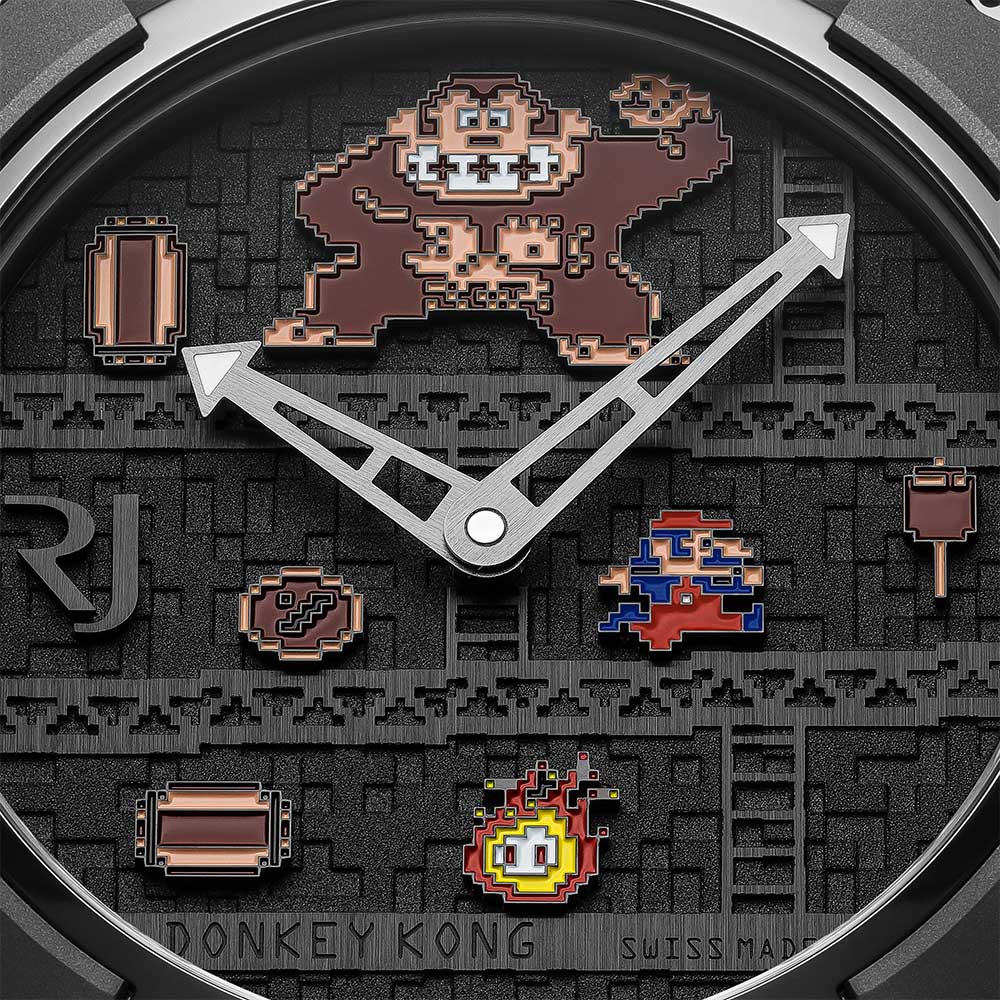 The Romain Jerome Moon Invader case is large at 46 mm dameter, in black PVD-coated titanium, with articulated lugs whose mobility is provided by ball-and-socket joints. The lugs are designed to provide a perfect fit on whatever type of wrist. Water resistance is 3 atm. The caseback is solid with a star pattern and a Donkey Kong medallion. Inside, the movement is the RJ001-A, self-winding. Romain Jerome don’t make their own movements, it could be an ETA, Sellita or similar. It has 23 jewels, runs at 4 Hertz, and has a power reserve of 42 hours. 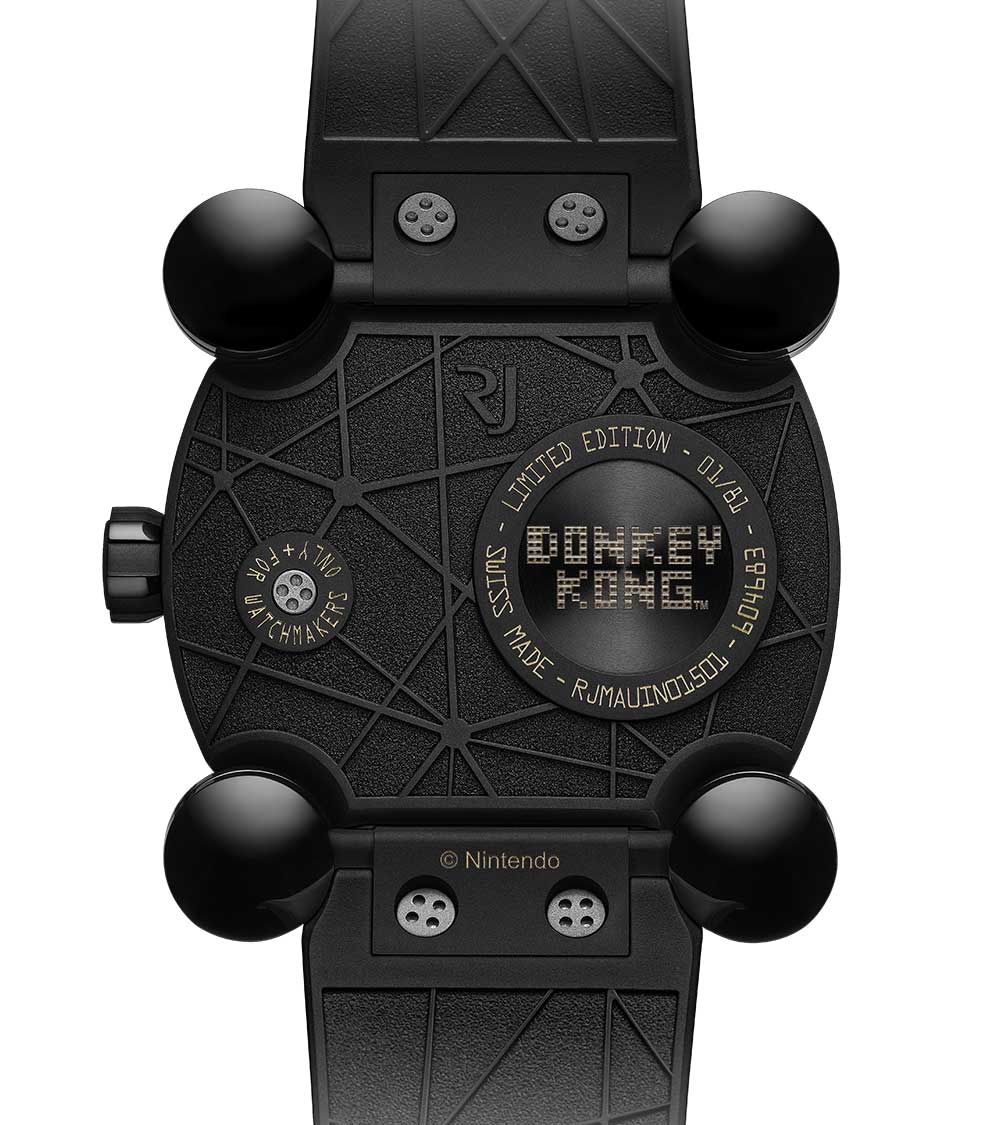 The Romain Jerome RJ X Donkey Kong is reference RJ.M.AU.IN.015.01, part of the Generational Icons collection, Collaborations. It is a limited edition of 81 pieces. Like all Romain Jerome’s game watches, it has the standard price of 15,555 Swiss francs, €17,500, £14,500, $16,500. Further information from the Romain Jerome website.