What is the connection between Iron Maiden and watchmaking? Heavy metal, I suppose, but the story of the chronograph Track1 by new watchmaking company Singer Reimagined goes a bit further.

Singer is a company that was founded by Rob Dickinson from Great Yarmouth, Norfolk, U.K., cousin of Bruce Dickinson, Iron Maiden’s lead singer, and it refurbishes Porsche 911 cars. He studied automotive design in Coventry, worked for a few years at Lotus, and then left to sing in a band called The Catherine Wheel (the Iron Maiden and the Catherine Wheel are both Medieval instruments of torture) that recorded five albums from 1990 to 2000, toured extensively above all in the U.S.A. and created a rich, guitar-laden sound that is a bit like Oasis but heavier. 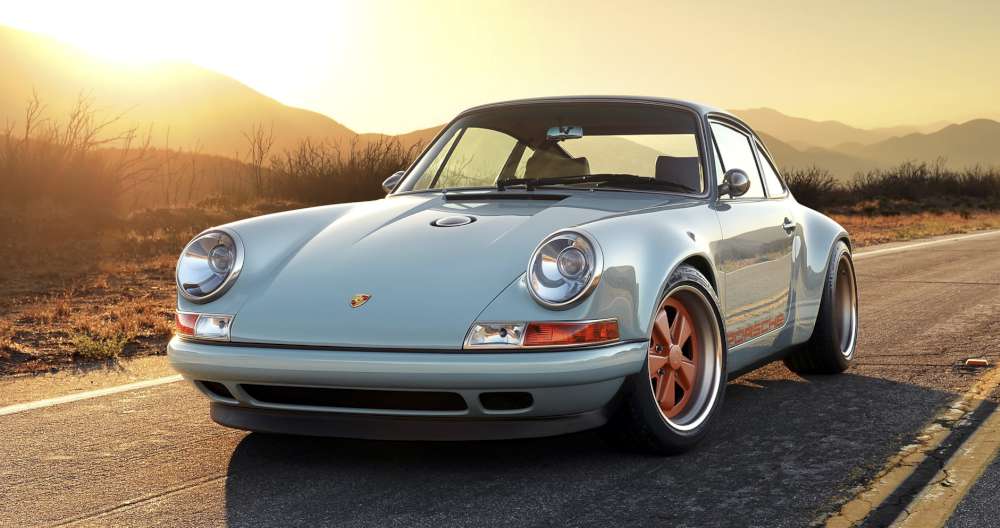 During that time, Rob was restoring Porsche 911s and ended up totally personalizing a 911C R for himself. This sparked his business enterprise. Today, Singer continues to turn customers’ Porsche cars into completely personalized vehicles in which every detail is reworked to perfection, a task requiring over 4,000 man-hours and an investment of between $400,000 and $600,000. His company Singer Vehicle Design was founded in 2009 and operates at Sun Valley, California.

Somewhere on the way, Rob developed a passion for watches as well, in particular chronographs dating back to the 1960s and ‘70s. In 2014 he met watch designer Marco Borraccino – born and raised in Milan, worked for Panerai, now has his own design studio – and they founded Singer Reimagined in 2014. According to the press release, Marco showed his initial sketches for the concept to movement designer Jean-Marc Wiederrecht, who realized that there was a connection to a movement that he had designed, the AgenGraphe. 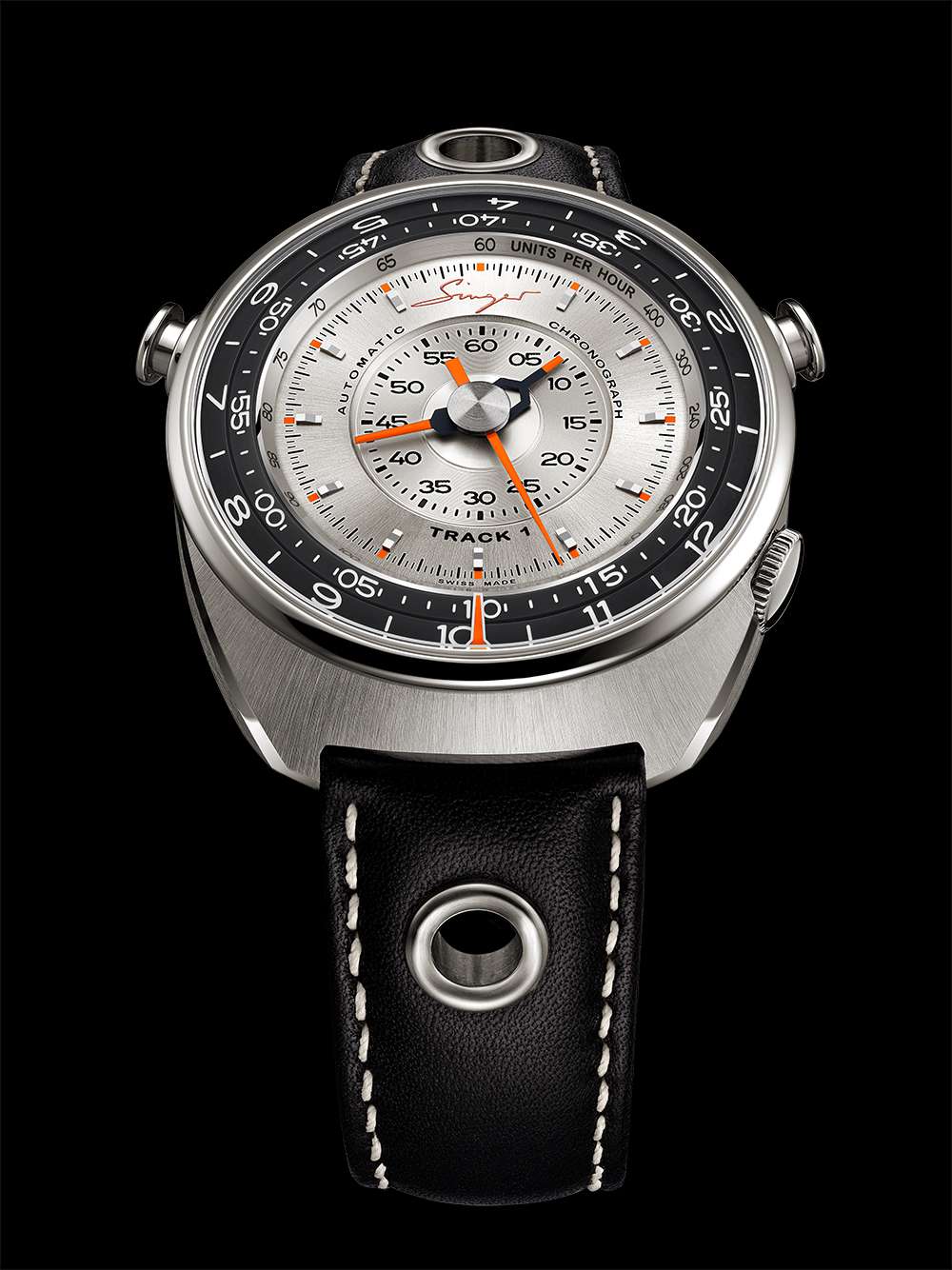 The concept of Track1 is simple: all the chronograph indications are placed at the centre of the dial. You read the time from the two concentric rings at the periphery, which are instantaneously jumping – they move at the completion of every minute or hour. A small marker above the rings marks the point in time. The case is in titanium, with a narrow bezel, and chronograph pushers in an unusual configuration, start/stop on the right and reset on the left. The crown is at 4 o’clock. Water resistance is 10 bar, 100 metres, 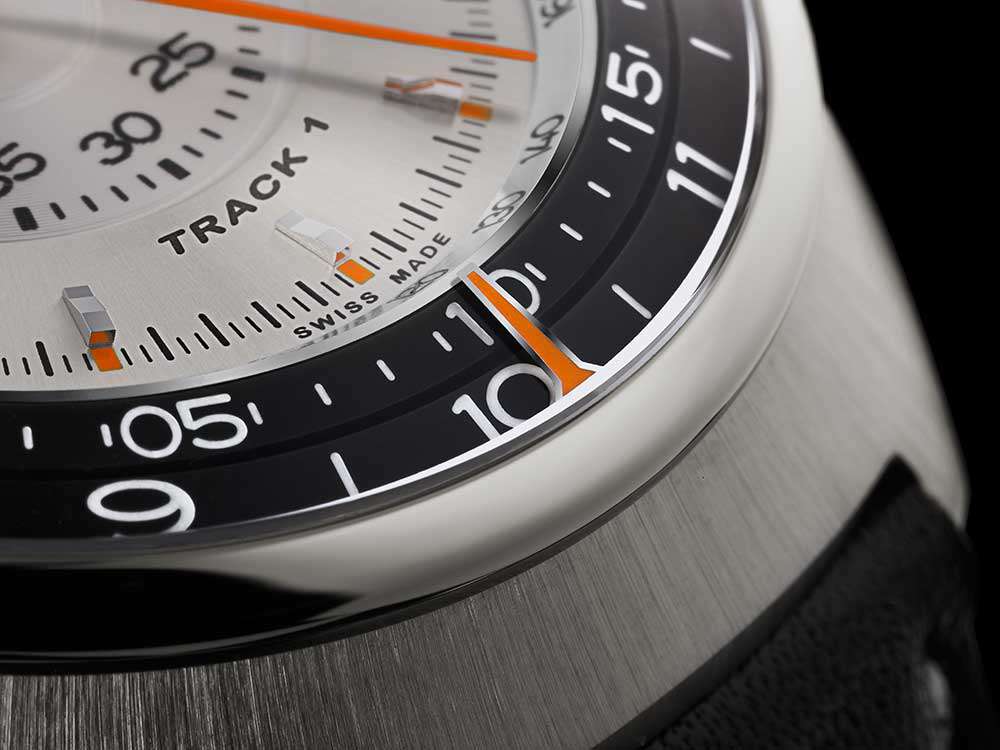 AgenGraphe is an automatic column-wheel chronograph movement, whose layout reflects the dial arrangement. In fact the chronograph module is at the centre, inside a ring-shaped base calibre. This concept by Wiederrecht will probably lead to other complications (such as moon phase, perpetual calendar etc.) in which the specialist indications are at the centre and the time indications at the edge of the dial. The rotor is also annular, on the dial side of the movement. The calibre has a new clutch system allowing smoother operation: it is a lateral friction clutch that combines the reduced friction of the vertical clutch with the space-reducing layout of the horizontal clutch. 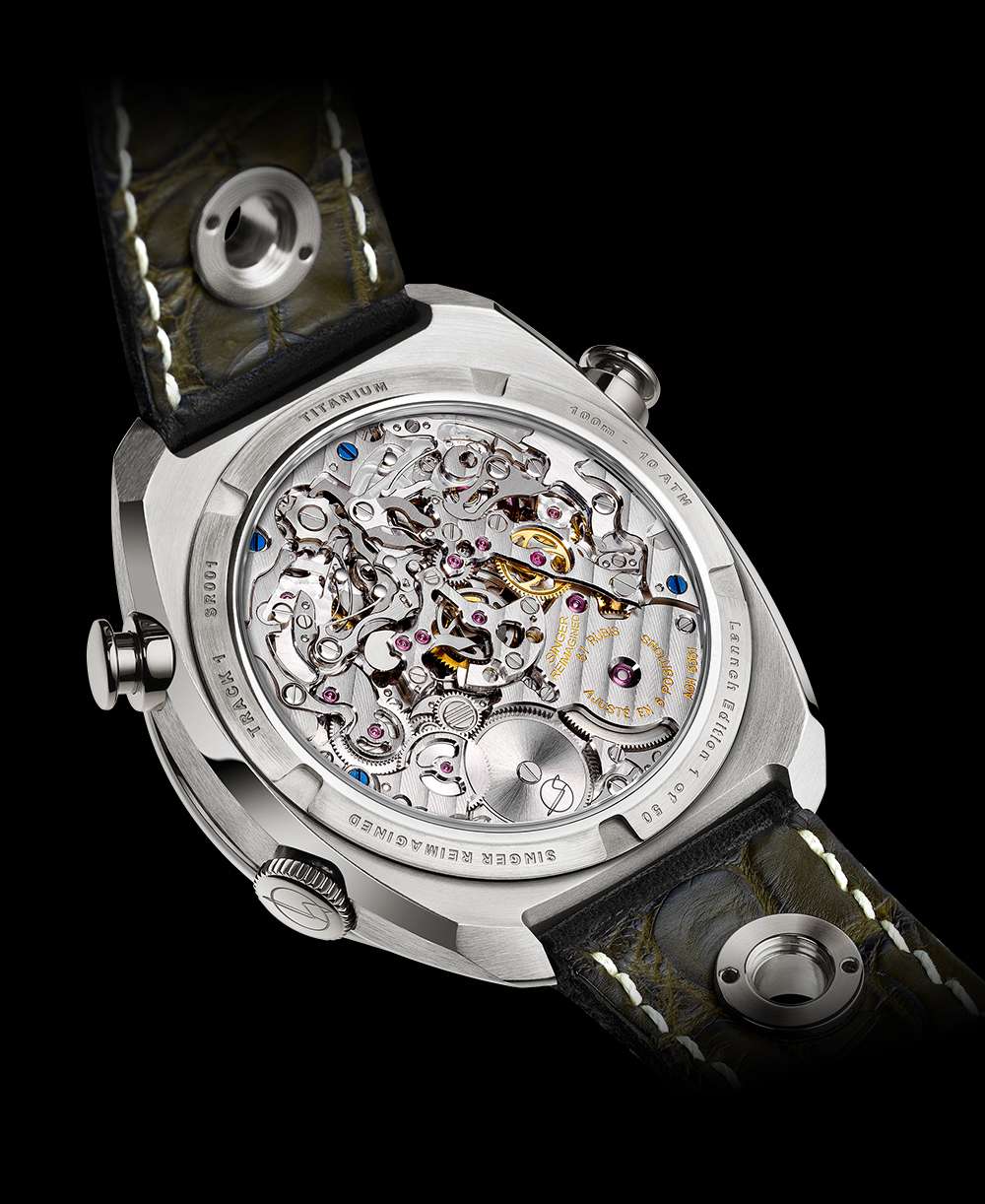 AgenGraphe, Calibre 6361, is so-called to link it to Wiederrecht’s design studio Agenhor, an abbreviation of Atelier Genevois d’Horlogerie. It has five patents, two of which are linked to the chronograph module. The movement has already been seen recently, on the the Visionnaire Chronograph by Fabergé. This watch has the same basic concept as Track1, in other words with chronograph indications at the centre of the dial and hours and minutes at the edge. I don’t know exactly how these things work, but I suspect that Marc Wiederrecht created the movement design and quietly offered it to brands without an exclusivity deal. 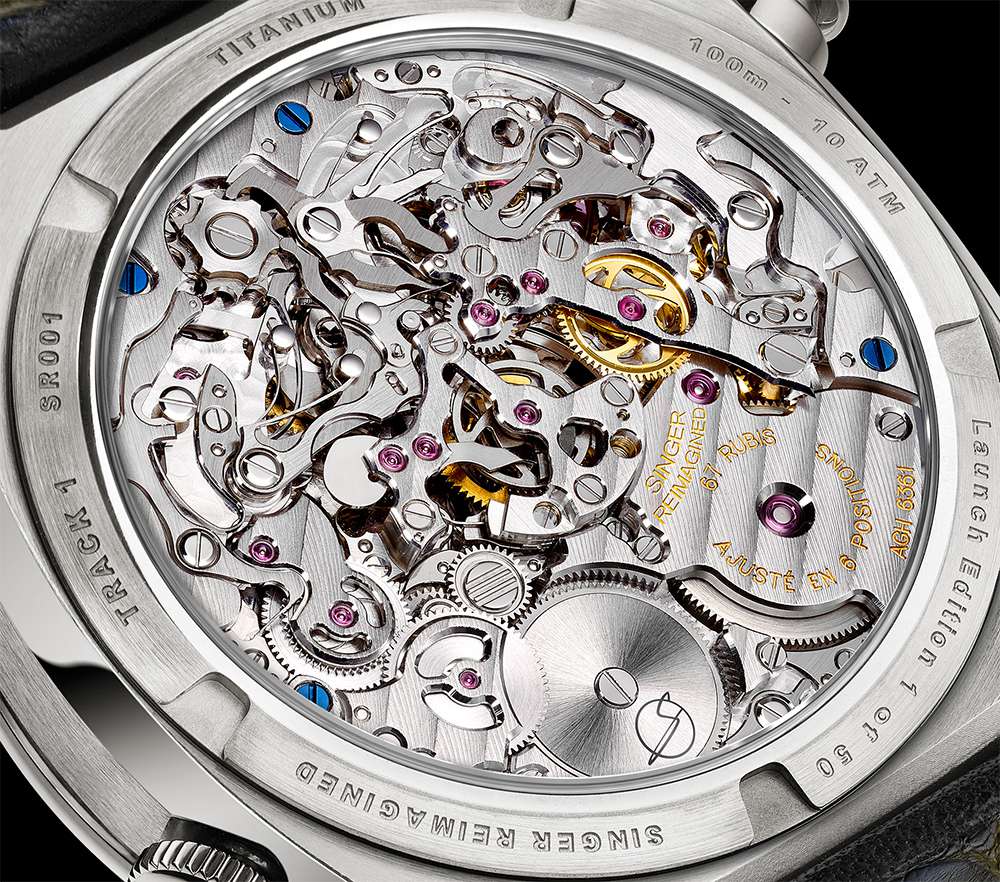 Singer Track1 has a soft black calf leather strap with khaki green alligator lining and brushed titanium rivets. Another interesting touch is the SuperLuminova, on the hour and minute rings. 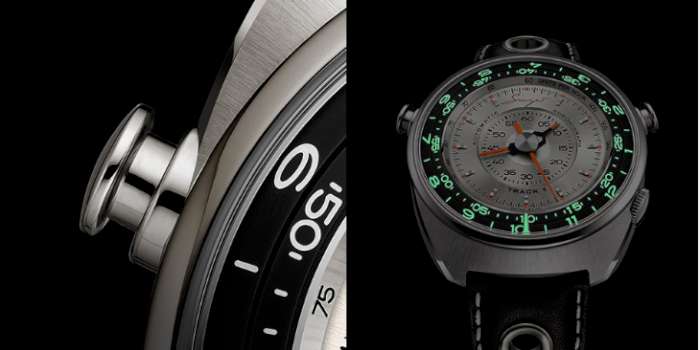 The watch is distributed direct through the website singerreimagined.com. It costs 39,800 Swiss francs plus VAT and local taxes if applicable. 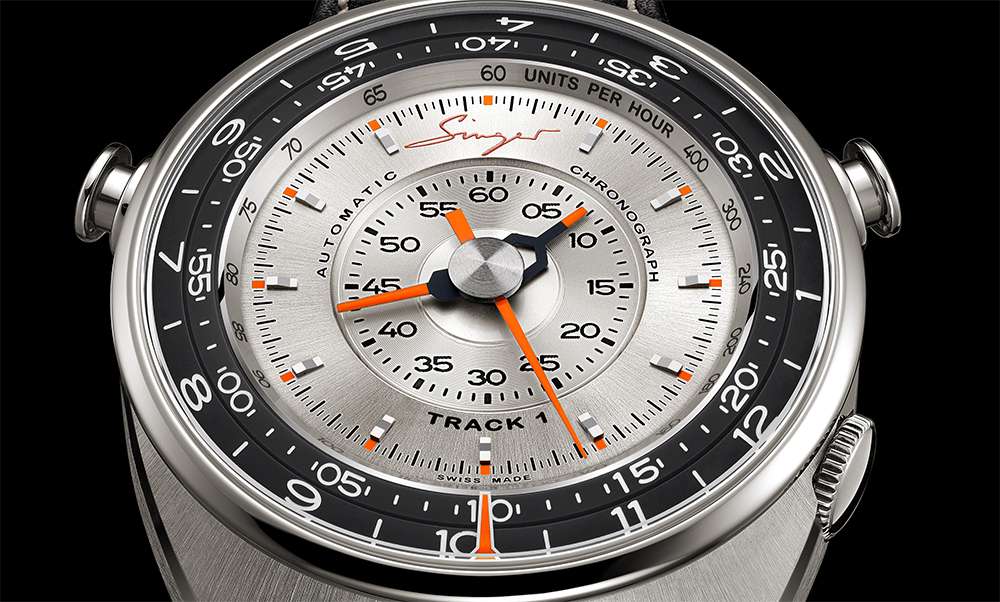