The Patrimony perpetual calendar that Vacheron Constantin presented in 2017 is a new version of an existing watch – last year it was presented in platinum with silvered dial. All the calendar information is shown on three subdials, day of the week at 9 o’clock, date at 3 o’clock, month and leap year cycle at 12 o’clock. 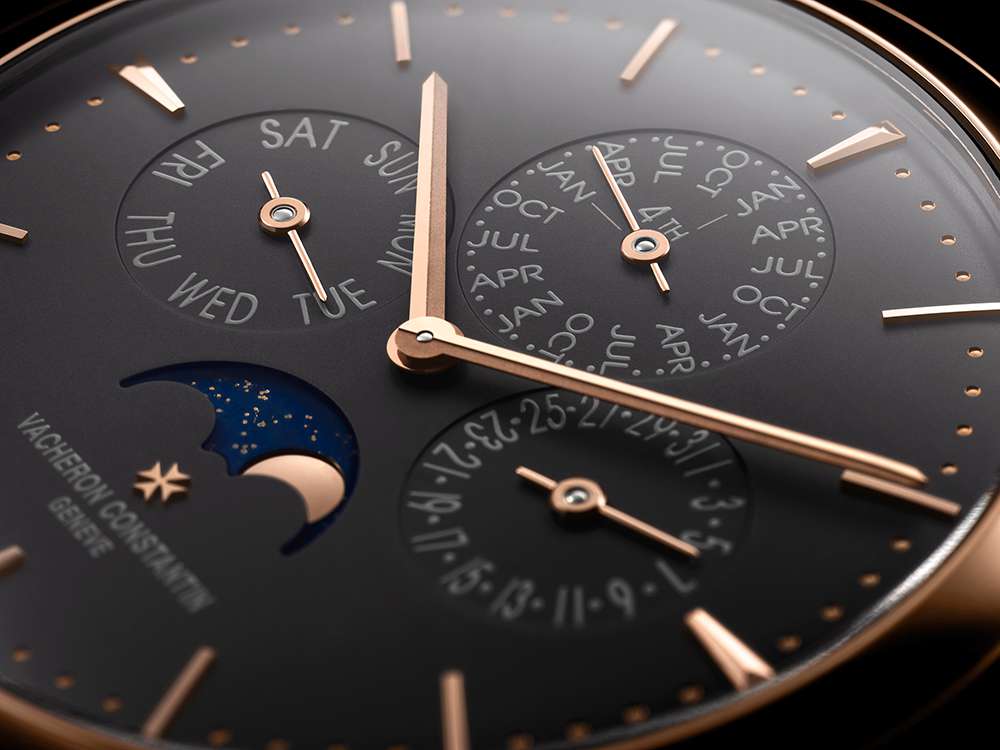 The case is 41 mm in diameter, and 8.9 mm thick. The result is a watch that is larger than the classical formal watch, but still very slim, so that it can easily slip under a shirt cuff in moments when discretion is required. Corrector pushers are located on the caseband for the correction of the various date functions should the watch stop running. It doesn’t have a seconds hand. 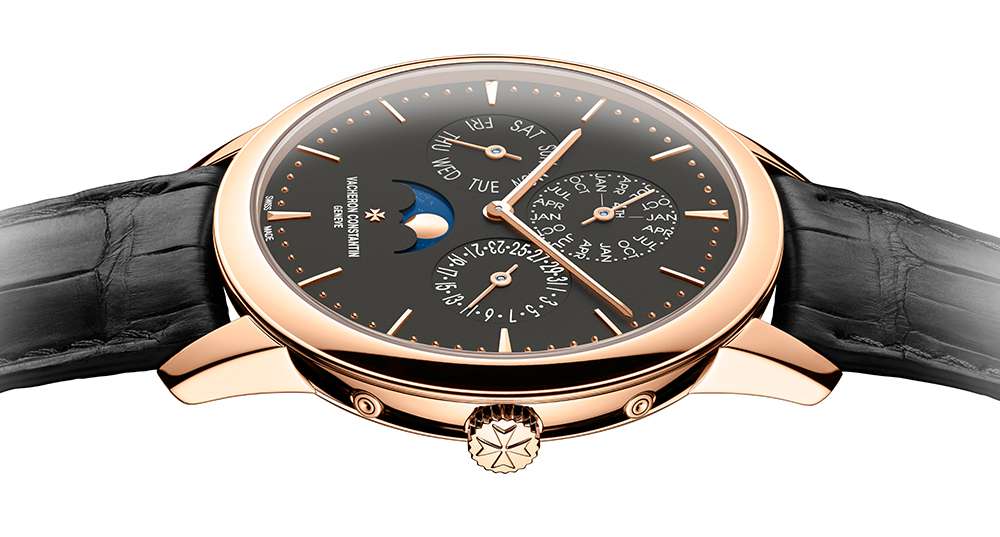 The dial provides a sense of space, though legibility is made more difficult for people who don’t have the eyesight that they used to by the scales of the dates and months subdials. Dates are alternating, while the months subdial has 48 months marked out. This is a plus factor for two reasons: the single hand goes around the dial once every 4 years, and so it is a good visual expression of the mechanical wizardry in the movement; and there is a single hand on that subdial, instead of the two hands normally used, one for months and one for the leap year cycle. On the negative side, there is just the question of legibility. But then, the owner of a watch like this is unlikely to actually use the watch to see which date it is. This is a different type of product, linked to other dynamics, of prestige and exclusivity. 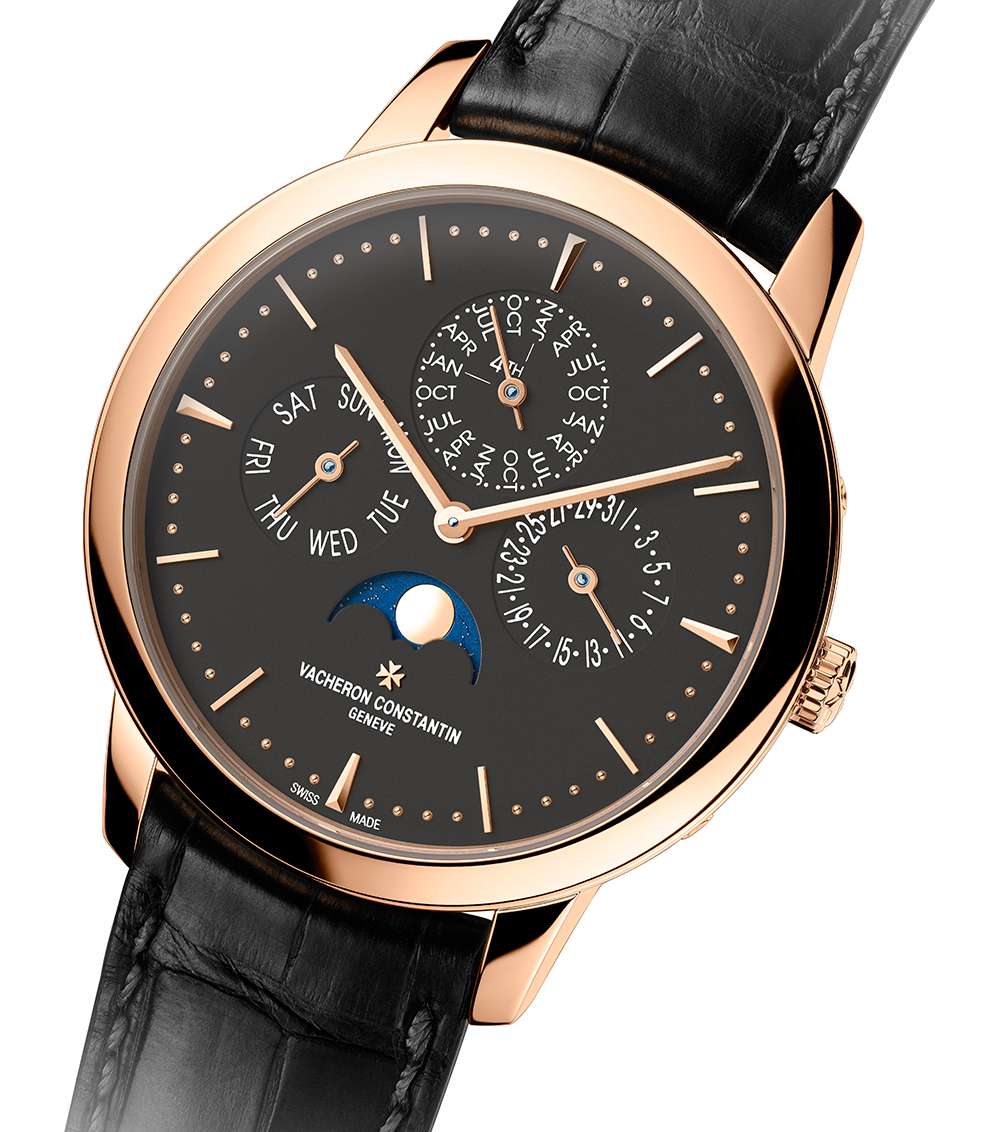 A touch of colour from the moon phase

Perhaps the real highlight of the dial is the moon phase, with a sky created by a blue galvanic treatment, and a golden moon and stars. The opaline slate-grey dial is slightly domed, with a minute track in pearl-like beads, and hour markers in pink gold batons. Water resistance is 30 metres. The watch has a black alligator strap with a pink gold clasp. 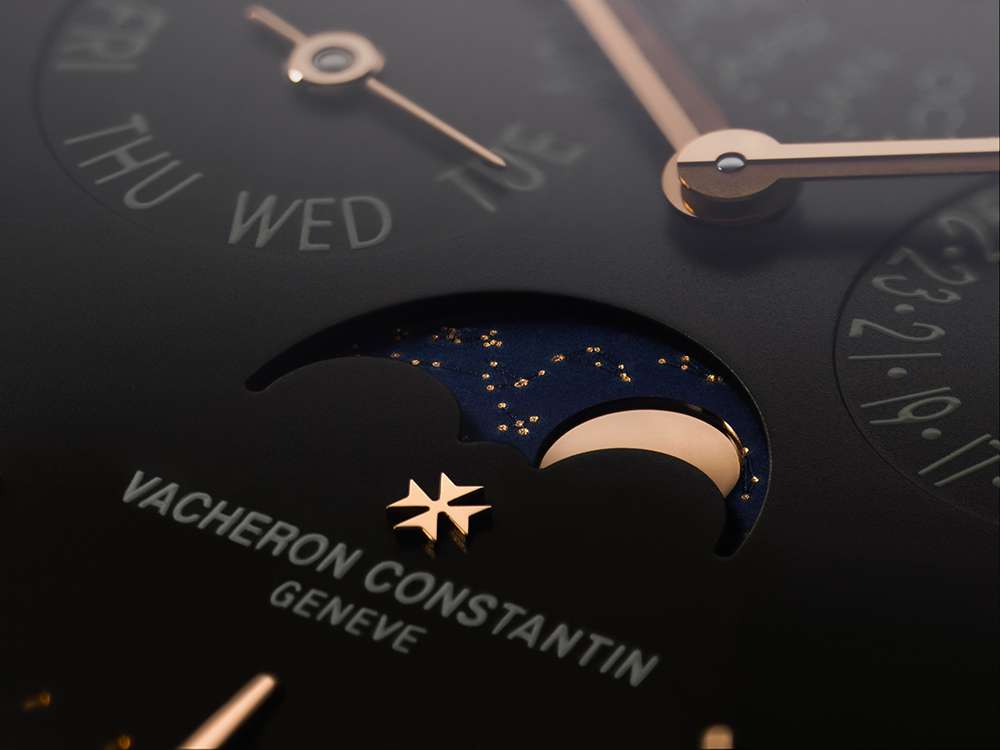 Calibre 1120 QP is an interesting movement, based on the 1120, often described as one of the most beautiful automatic movements ever built. The 1120 began life as the Jaeger-LeCoultre calibre 920, introduced in 1967 and supplied to Audemars Piguet, Patek Philippe and Vacheron Constantin as ébauches – apparently the three brands provided financial backing for the design – and never used by Jaeger-LeCoultre. Patek used it as calibre 28-255, Audemars as calibre 2120. It has many distinctive technical features, including the unusual balance frequency of 19,800 vibrations per hour, 2.75 Hertz. I have to find out the reason for this frequency, which means 5.5 half-beats per second. The movement provides a 40-hour power reserve. The oscillating weight includes Vacheron Constantin’s Maltese cross emblem. 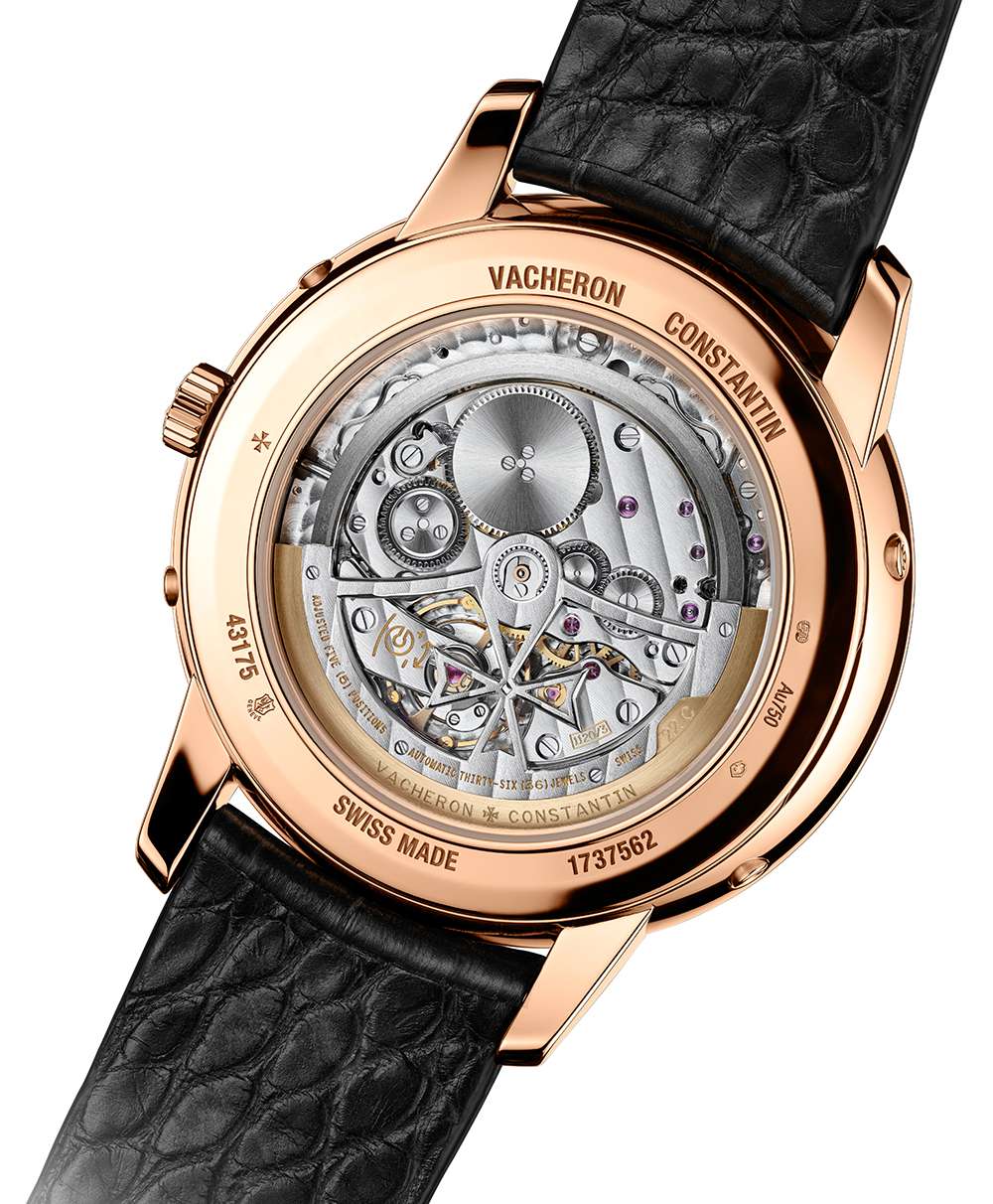 The Patrimony perpetual calendar by Vacheron Constantin is reference 43175/000R-B343. It has Hallmark of Geneva certification, and it is delivered in a presentation casket that includes a watch winder and a corrector pen. Price €83,300. 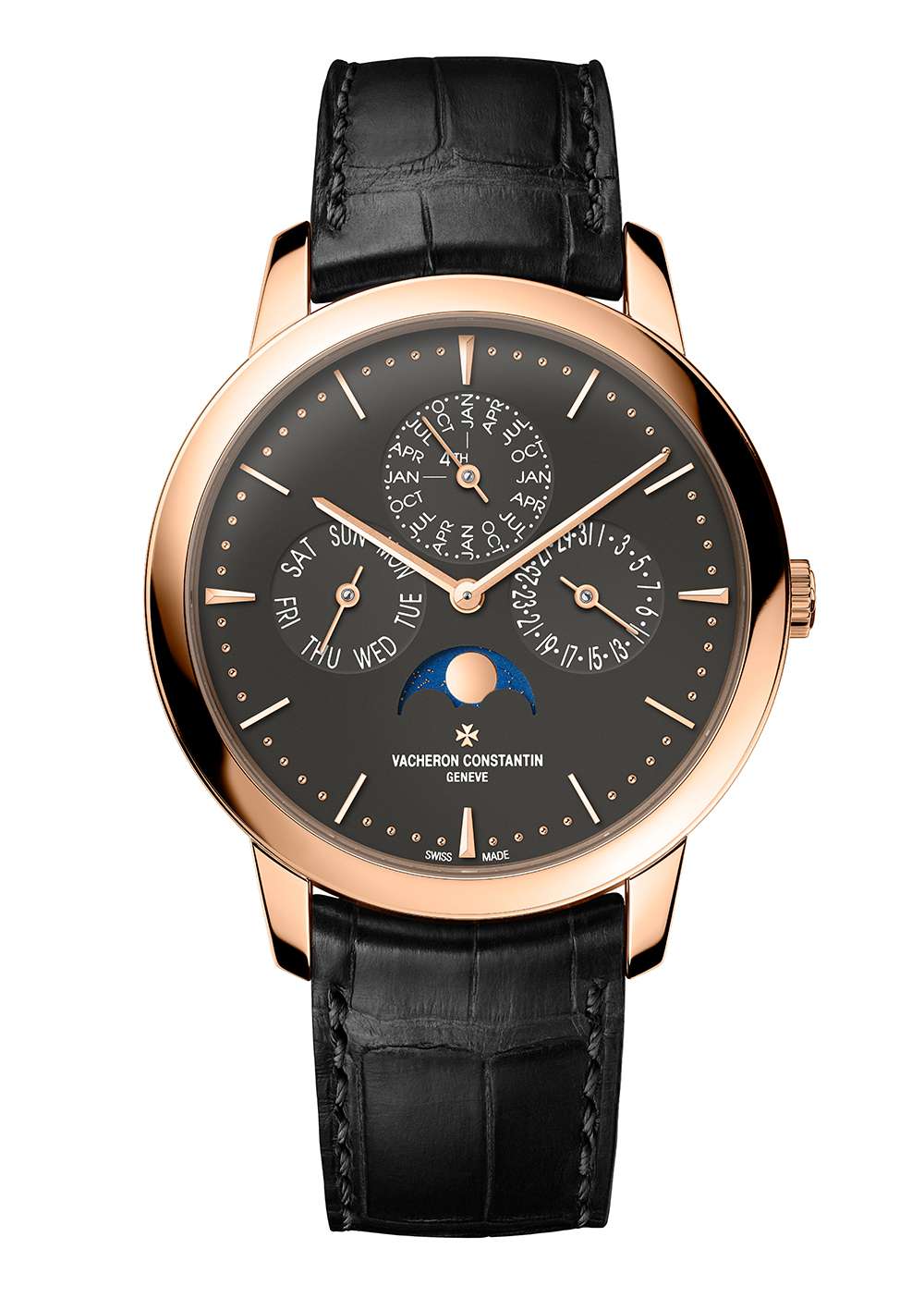