The Récital 20 Astérium by Bovet 1822 is a watch that keeps track of astronomical time. Instead of using the usual perpetual calendar function, in which the watch takes the leap year cycle into account, and so adding an extra day every four years, the Astérium follows the true course of time, determined by the rotation of the earth around the sun. This orbit takes 365 days, 6 hours, 9 minutes and 9.77 seconds, which approximates to 365.25 days, the so-called sidereal year. This is shown by a single hand on the caseback which likewise makes a single revolution in that time. 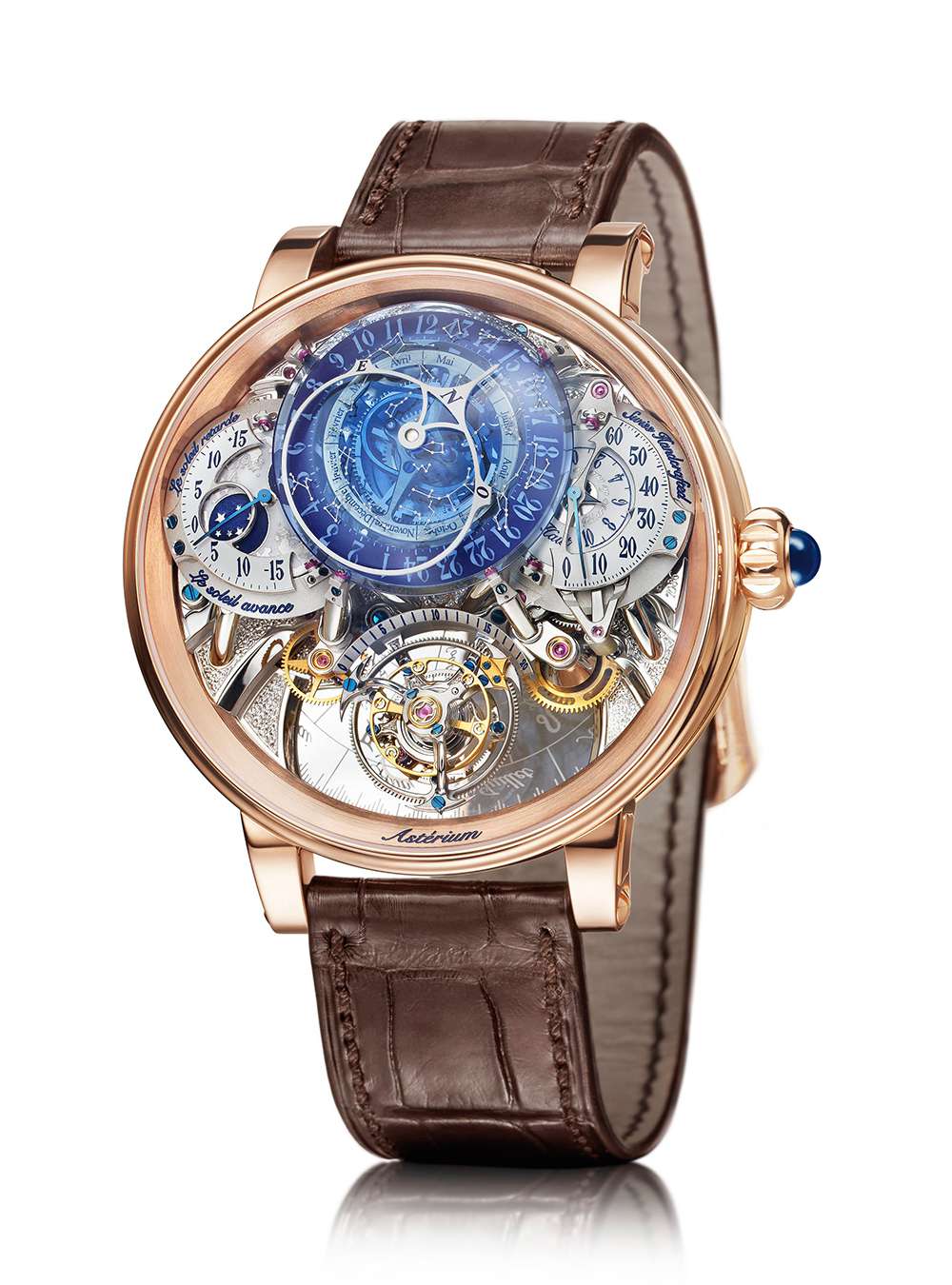 The most important indication on the front of the watch is not days, months and years as would be for a perpetual calendar watch, but the night sky, The stars and constellations are engraved onto a dome of translucent blue quartz, and an elliptical hour hand shows you the appearance of the night sky at any moment. It also indicates north. You just have to imagine standing at the centre of the ellipse, which defines the horizon. Bovet 1822 are experts in using SuperLuminova in creative ways, as in their Château de Môtiers 40 Papillon, and in the Astérium the stars are coated in luminescent paint for added realism in the dark. The tip of the hour hand is also luminescent, along with the backdrop for the moon phase on the left, and the power reserve indicator on the right. 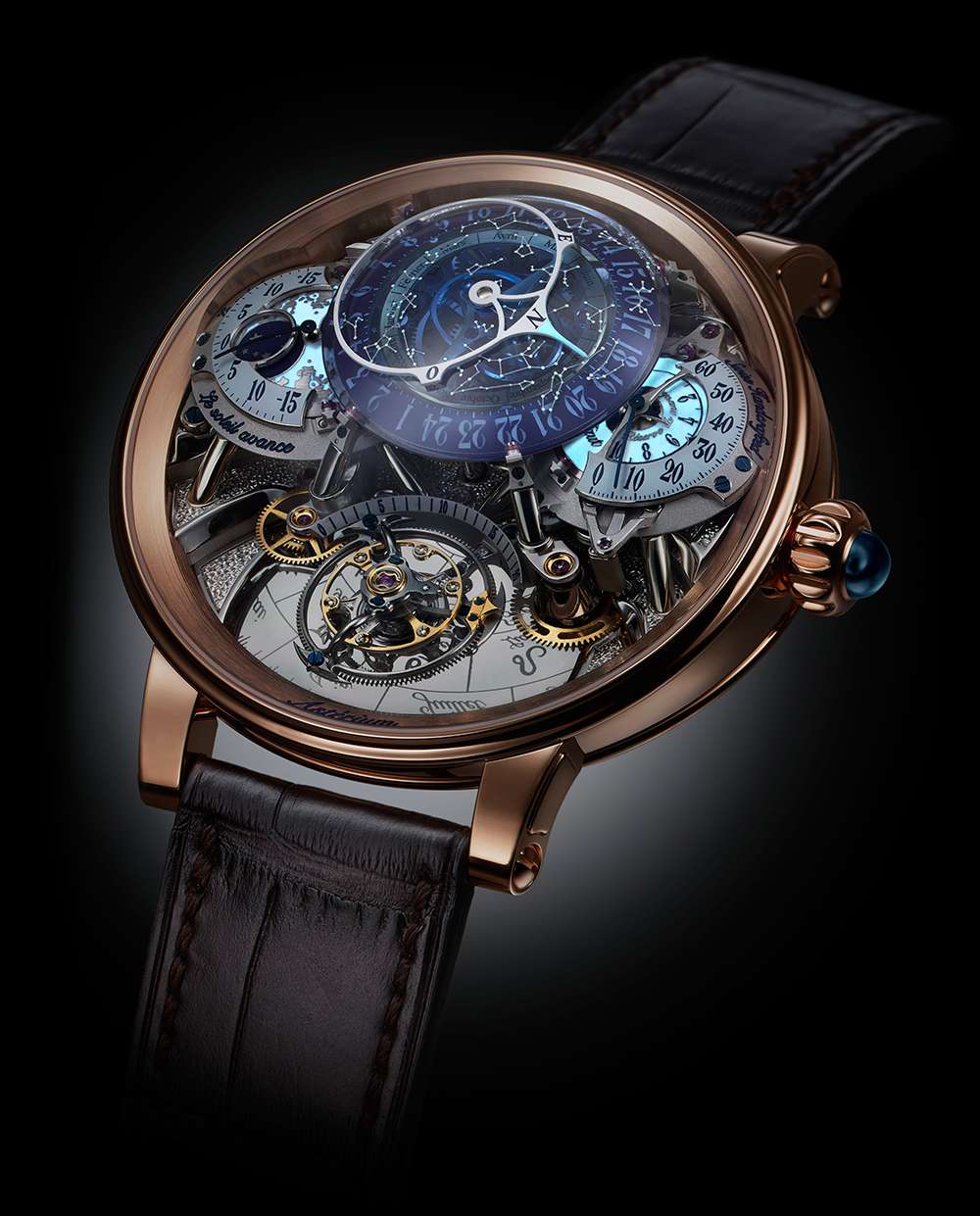 The watch has a wedge-shaped case and movement, giving it an architectural, three-dimensional structure. At the bottom of the dial is the tourbillon regulator, with its balance running at 2.5 Hertz, 18,000 vibrations per hour. The subdials at the top are supported on polished columns that provide space for the movement underneath. On the central display, the hour hand revolves around a 24-hour scale, while the constellations dome revolves once per year on a circular track with ruby wheels. To the left, the blued hand shows the equation of time. This is a logical addition to an astronomical timepiece, and it shows the difference in time of the true solar day when compared to the average 24-hour day. The earth’s orbit around the sun is slightly elliptic, and so the time of the solar zenith can be up to 15 minutes ahead or behind. This is shown by the blue hand on the numbered scale. Inside this is the hemispherical moon phase. On the right-hand side of the watch, there is a ten-day power reserve indicator, and a retrograde minutes hand. 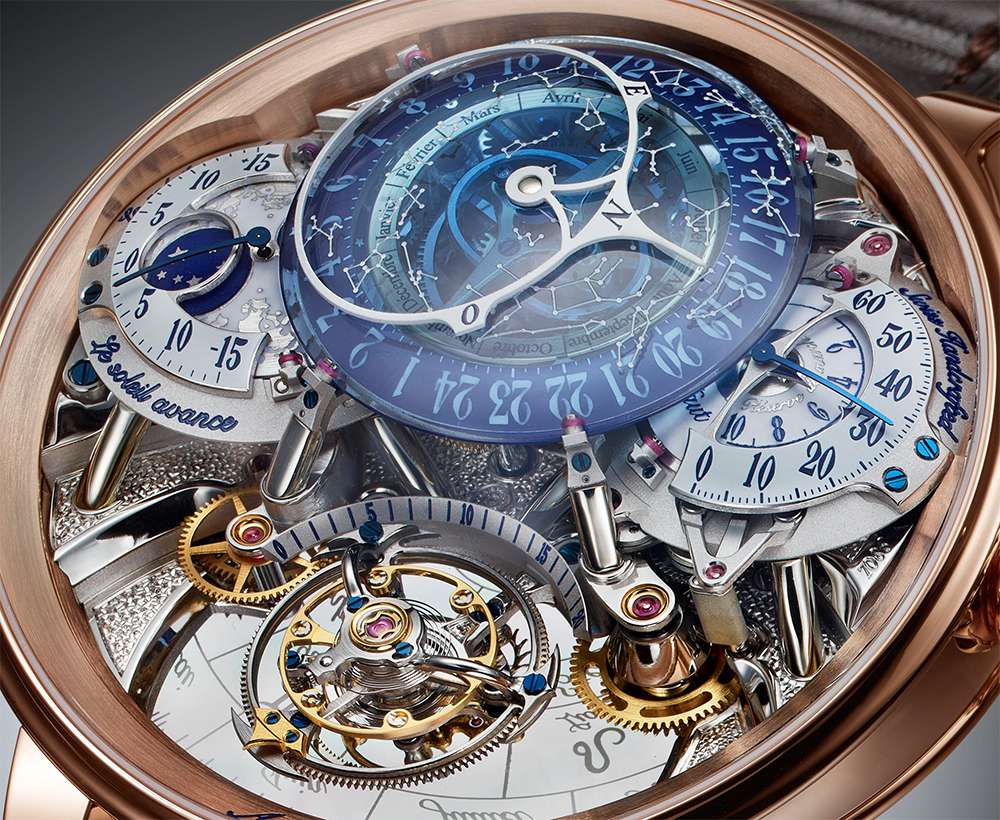 Bovet 1822 have patented their own style of tourbillon, visible from both sides of the watch. It has a variable-inertia balance wheel, with six adjustable weights. Once each balance wheel has been completed, it is paired with the balance spring, selected according to the micrometric differences between them. This indicates a traditional approach to watchmaking: the balance spring is in metal, not in silicon, and so each balance spring is slightly different. A pointer on the carriage indicates the seconds on a partial 20-second scale. 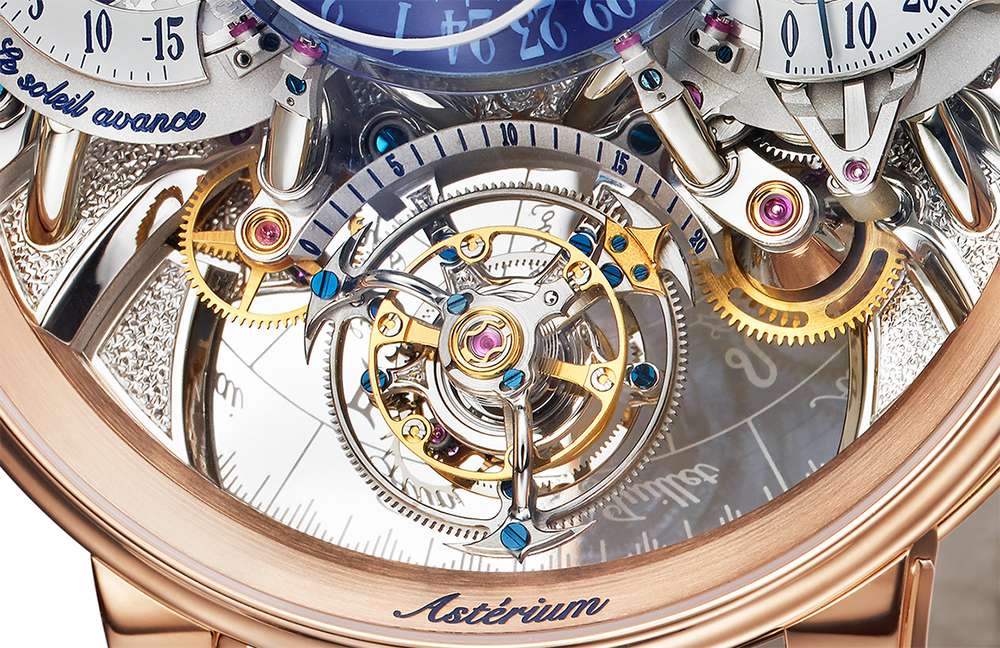 Calendar on the reverse

The caseback is in transparent sapphire crystal. A single hand rotates once every 365.25 days and so indicates date and months on the external graduated scale, with numerical indications on the bezel. Further in, the seasons, solstices and equinoxes are shown. In a way the watch is simpler than a perpetual calendar, which has to follow the artificial Gregorian calendar with its extra day every four years. The Astérium doesn’t have to do this because its single calendar hand rotates at a speed exactly mirroring the earth’s journey around the sun. So it doesn’t need the various correctors that are typical of a perpetual calendar watch. To adjust the calendar, you pull out the crown to a position in which hour and minute indications are disconnected, and you set the date. Then you set the time with the crown in another position. I presume that moon phase is set using the single corrector that you can see on the caseband in the photo below. 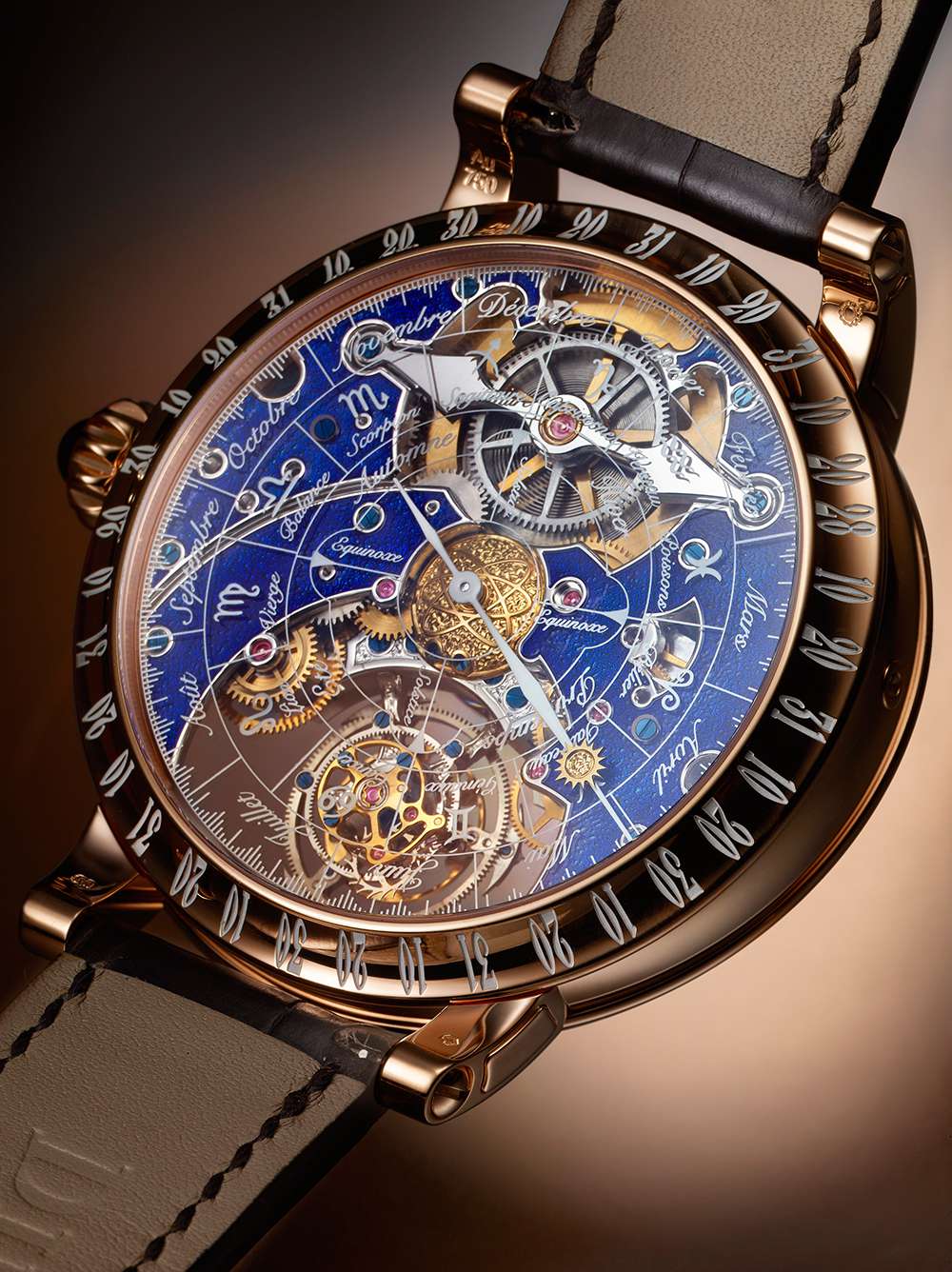 The watch is hand-wound, with a single barrel providing a 10-day power reserve. You can see the mainspring through the sapphire caseback. Ten days is exceptional for any watch, particularly for this piece with a tourbillon and the dome-shaped constellation display, with a lot of parts in constant movement – albeit very slow.

Purchasers can choose between red gold, white gold or platinum for the case. Only 60 Astérium movements will be made. The price of the Récital 20 Astérium is 335,000 Swiss francs excluding tax, $350,000; the price is the same for red or white gold. For further information, see the Bovet website. 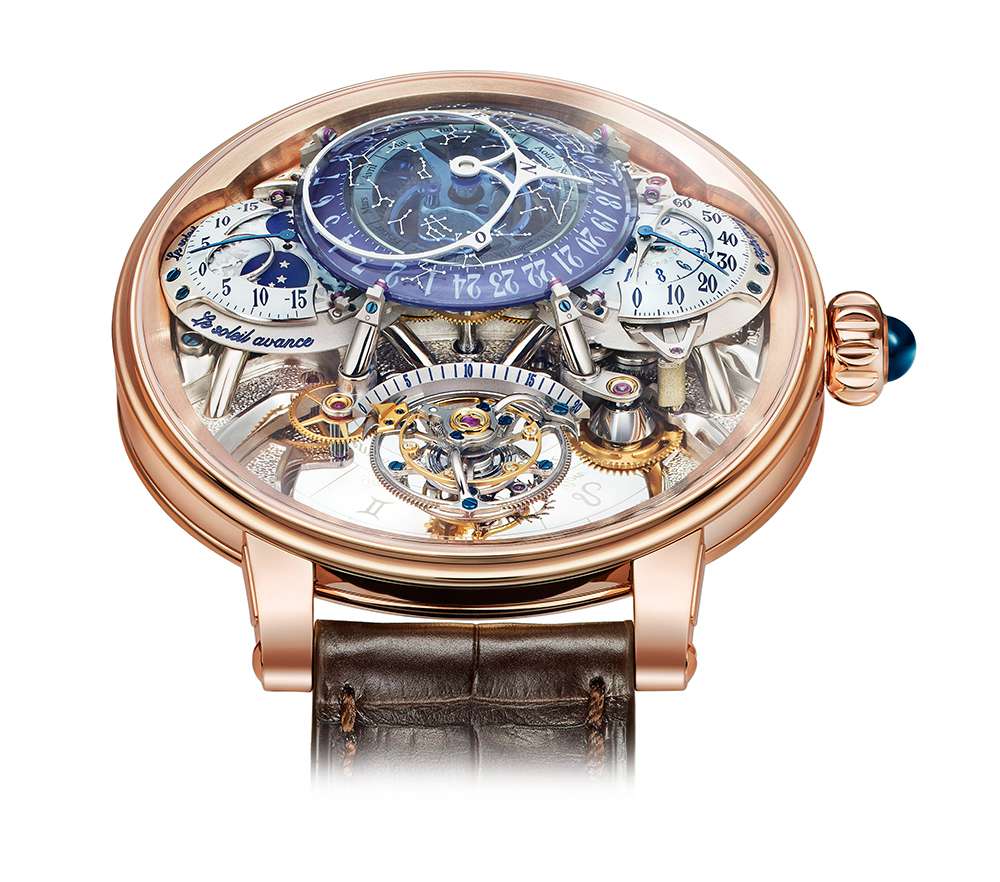