The Manero Fyback by Carl F. Bucherer was first presented in 2016, with three new colour variants added in 2017 and shown here. The watch could be described as a dressy chronograph, with large skeletonized hands in the same material as the case, but with no SuperLuminova, and hour indices whose shape mirrors the hands. A date window at 6 o’clock completes the “everyday watch” functions. The watch’s chronograph identity is immediately obvious from the bold piston-type pushers, but the dial shows that chronograph legibility has been given a secondary role with respect to the overall looks. A slender chronograph seconds hand is in precise reference to a quarter-seconds scale that is however interrupted by the hour indices, with about three seconds bereft of indications at 12 o’clock, and 6 seconds for which legibility is very difficult due to the position of the words “Swiss made” at 6 o’clock. 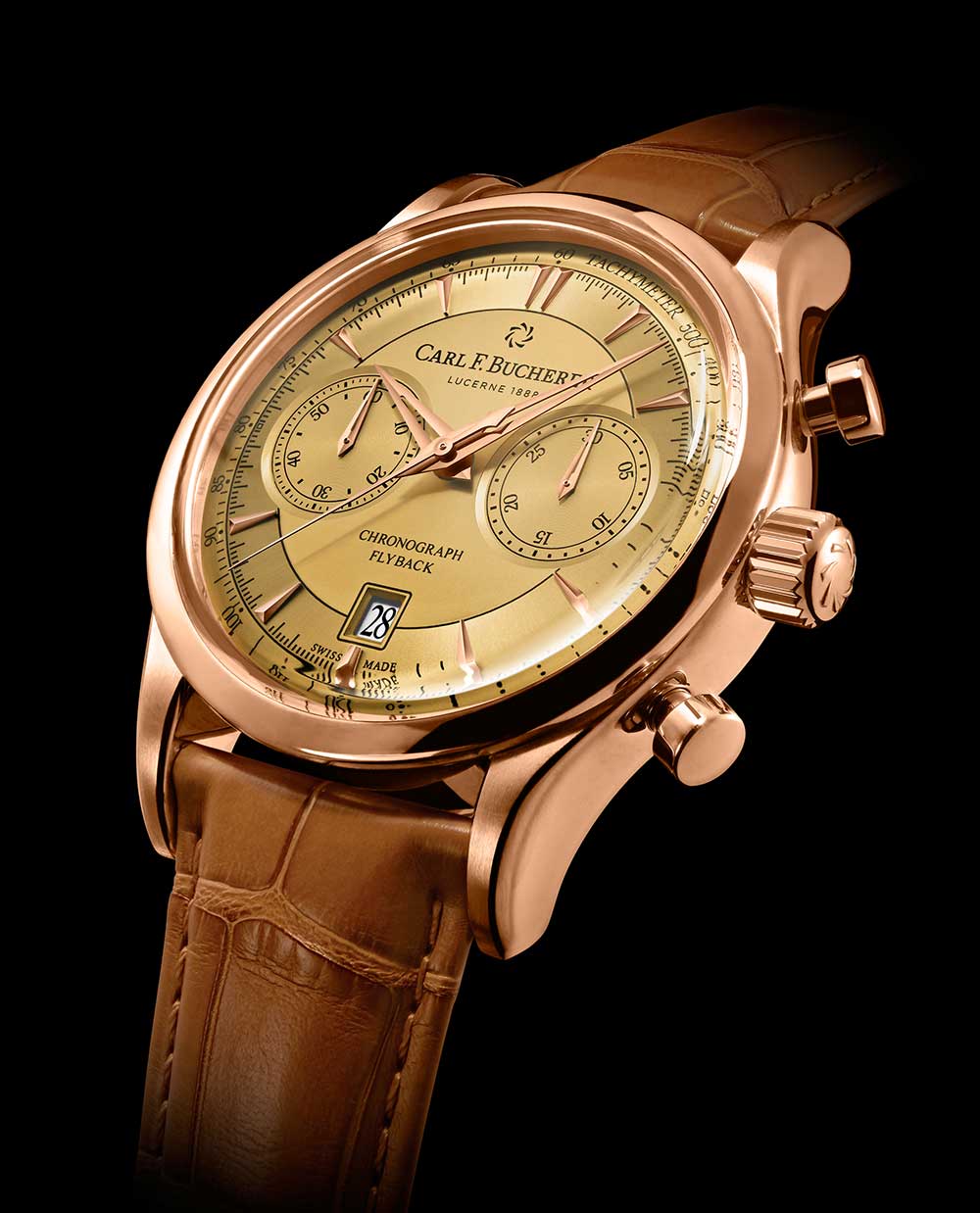 Leaving aside considerations on practicality as a chronograph, the Manero Flyback has very appealing looks. The red gold and champagne dial version with brown alligator strap has a superbly rich and lavish look that sets it apart from most. The stainless steel version has a lovely blue-grey dial with colour reflections varying from green to blue. The third variant for 2017 has a more classical matt black dial with red gold case. Visual interest is increased by the recessed subdials and the narrow raised flange on the bezel rehaut. 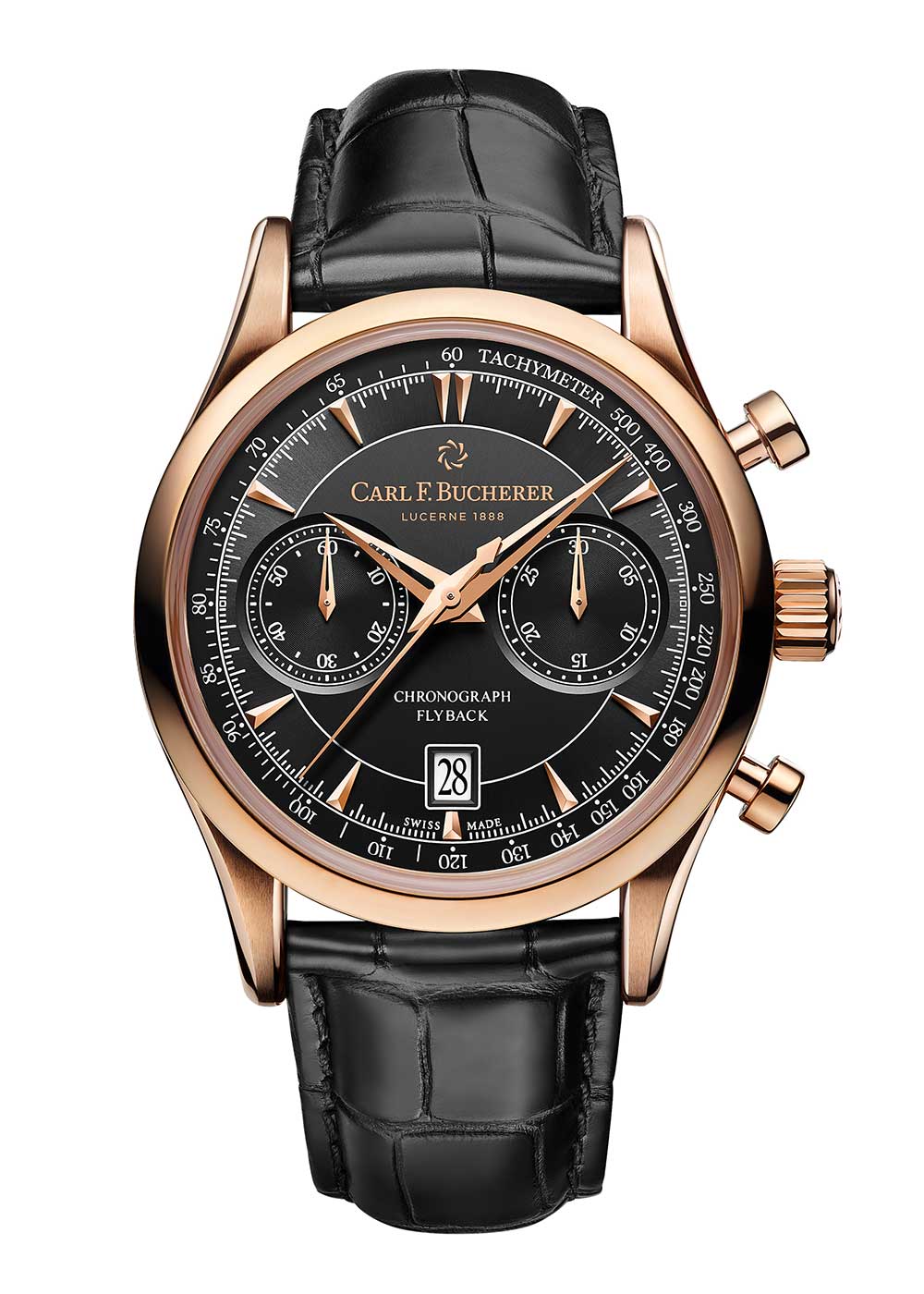 The Manero Flyback has a case 43 mm in diameter, 14.45 mm thick, with a water resistance of 3 atm, 30 metres. The watchglass is domed, the watch has a sapphire caseback window, and an alligator leather strap with pin buckle. 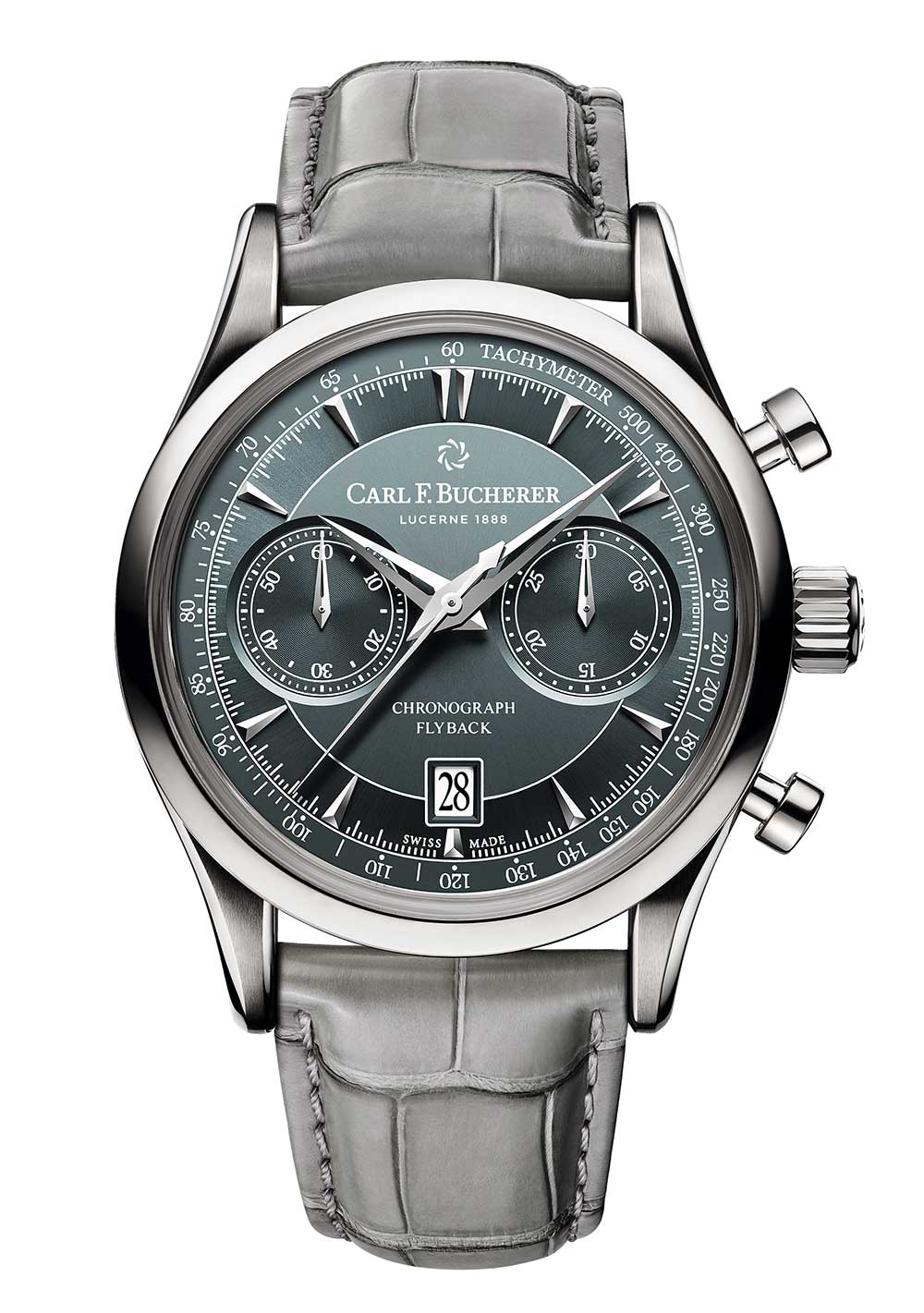 The CFB 1970 calibre has a column wheel for controlling the chronograph functions, including the flyback function, in which you start the chronograph by pressing the pusher at 2 o’clock, and then just one pressure on the pusher at 4 o’clock is sufficient to reset and instantaneously restart the chronograph hands. It is achieved by keeping the chronograph wheels running, disconnecting and returning the hands to zero, and reconnecting them. The column wheel can be seen through the caseback, along with the shaped oscillating weight with Cotes de Genève finish. But the movement is not at the same level as the in-house CFB A1000, the brand’s first in-house movement dating to 2008. The CFB 1970 seems to be a highly modified version of the Valjoux 7750 reworked by La Joux-Perret, in which the usual cams and levers of the 7750 are replaced by the column wheel, giving the pushers a smoother action. 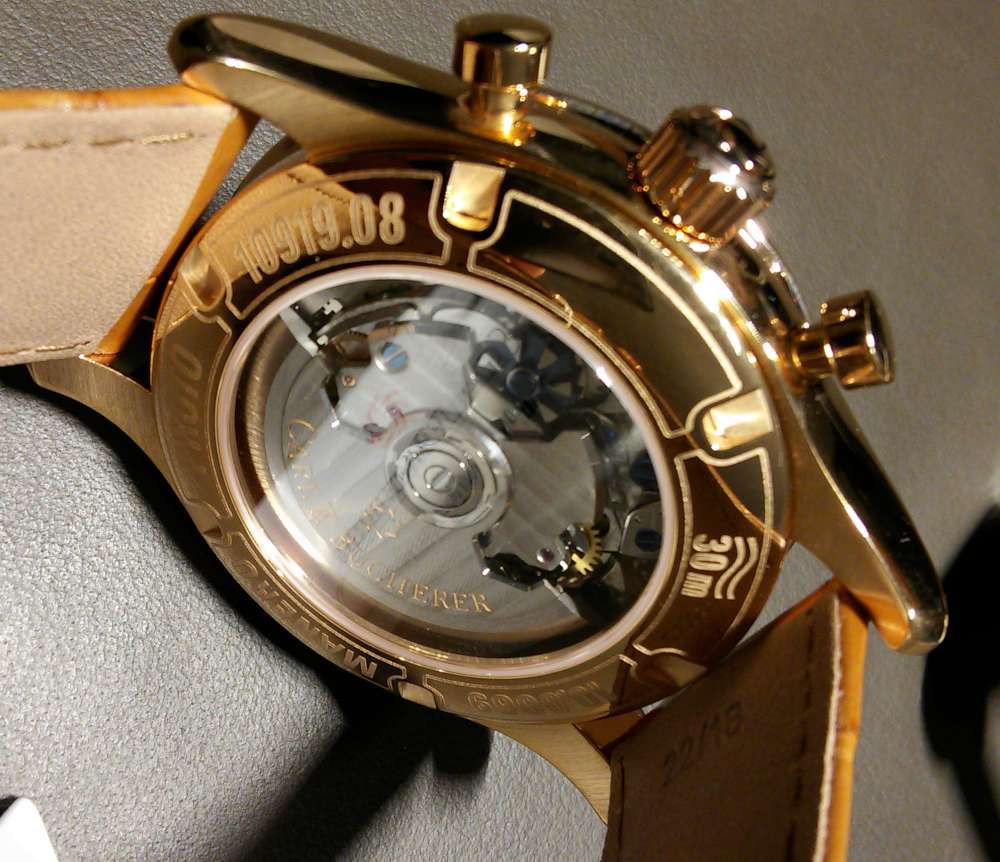 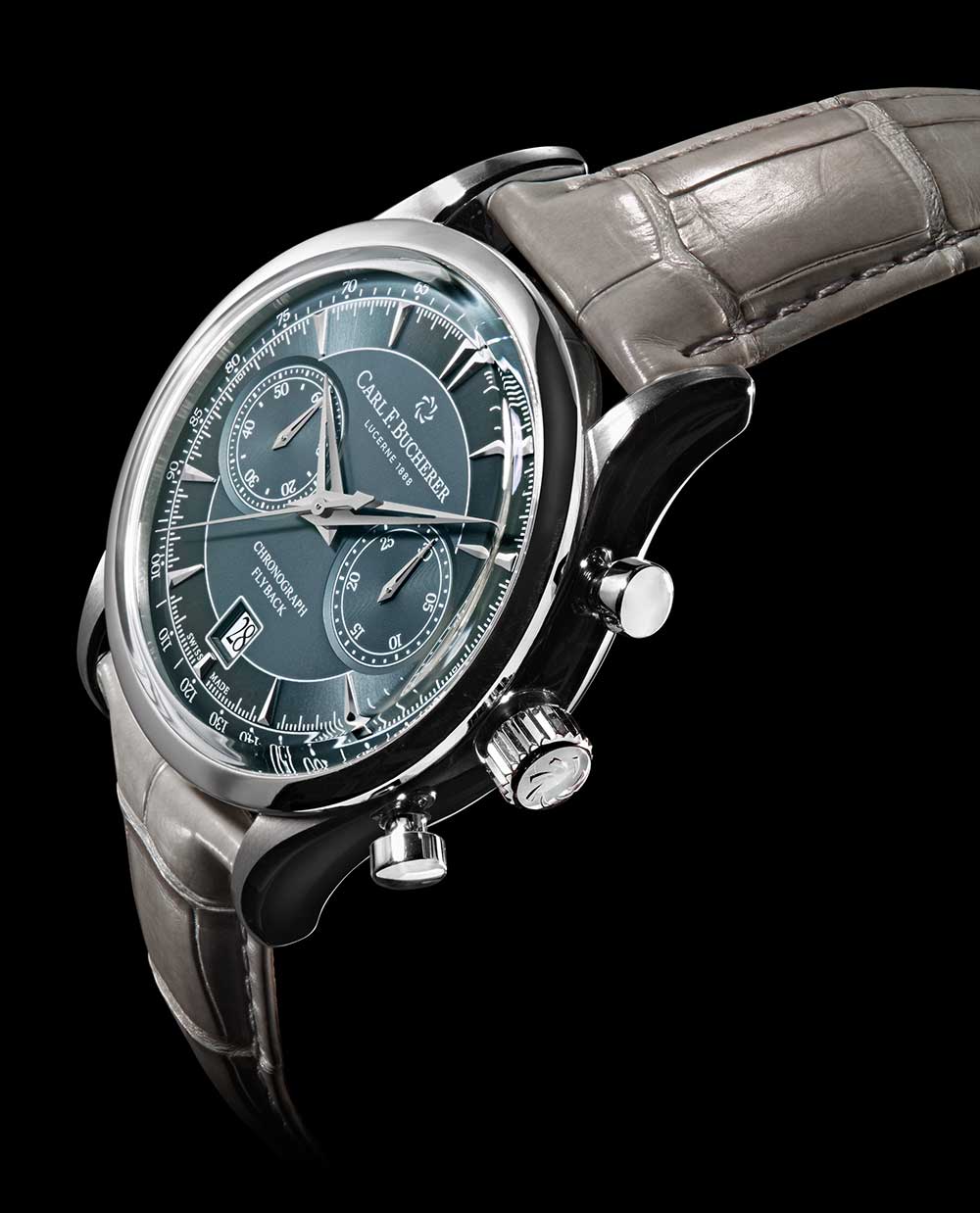 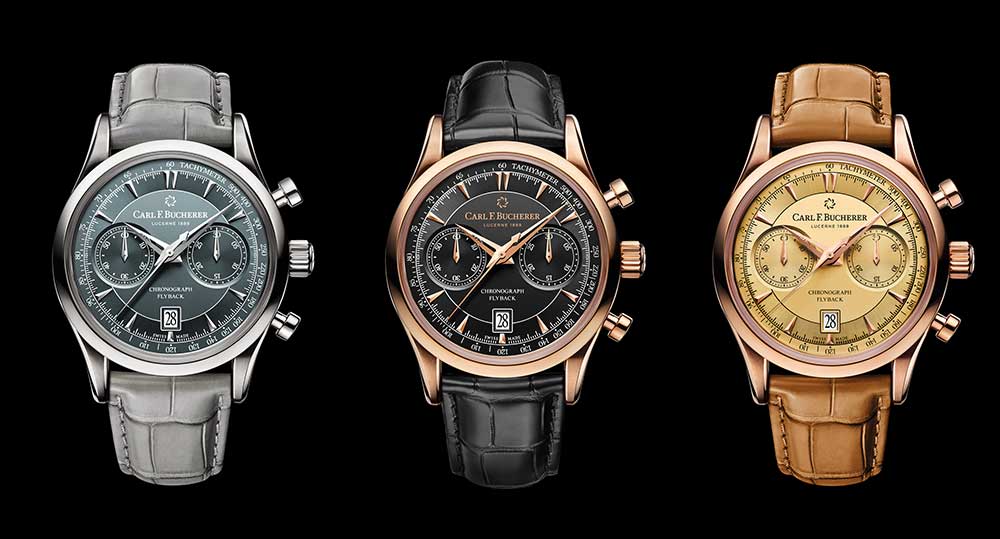